Question I just broke off some SMD’s off the gpu….

I noticed unreasonably high temps from this XFX R9 380 and went to replace the thermal paste.

while trying to remove the heatsink screws my hand slipped and i hit some smd’s and they broke off. I dunno if they’re resistors or capacitors.

its still working but should i be worried? I haven’t told the owner… yet, but…

i have an old board here with some smd’s that look similar and a hot air gun. Should i attempt to do it? Im running a stress test on it now and its not crashing, so should i pretend it never happened?
0
J

Here are the smd’s i broke: 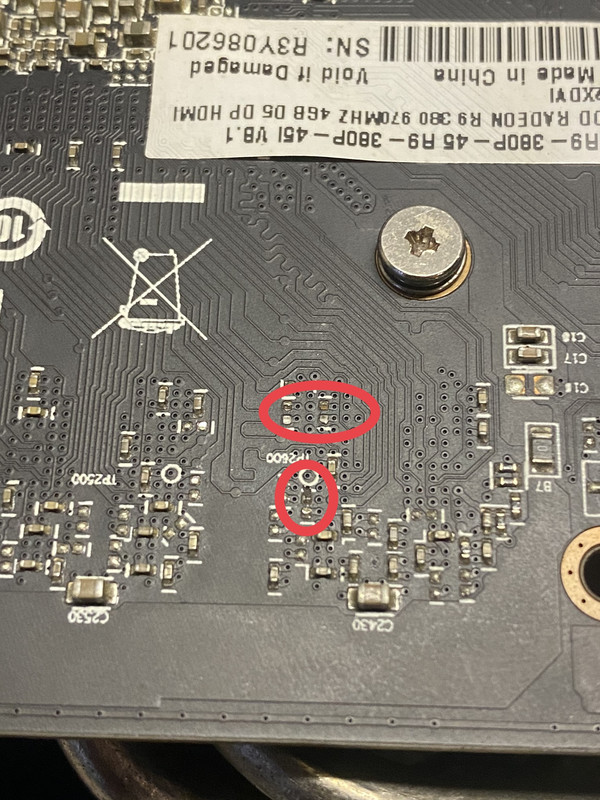 you could google the board layout and see what they are for, find out if they are acceptable losses. Sounds like you lucked out so far.
0
J

spentshells said:
you could google the board layout and see what they are for, find out if they are acceptable losses. Sounds like you lucked out so far.
Click to expand...

i couldnt find much info about the xfx r9 380, no pcb diagram of sorts. I found a buildzoid video about a sapphire one but I don’t think theres anything useful there.

interestingly, i could overclock an extra +50 mhz from the last stable overclock of 1120. I dont know if its because my last thermal paste application was botched (not all of the die had thermal paste) or because of the smd’s.
0
J

I’ve done some research and it seems the smd’s that i broke off are capacitors and not resistors. I found some online and there are a lot of different capacitance values. But there aren't any values marked in the other capacitors on the card.

anybody know if theres a chance the card could get damaged if i put the wrong value? Or if these small capacitors are polarity sensitive?
0
C

I had bypassed a fuse for a graphic card once it worked once but went up in flames a couple of minutes later xD. However, in this case it's a capacitor and if it's still working it would probably knock some fps performance off the card a little bit due to unstable current fluctuations(?) and if you're not overclocking it should be fine.

*please take my words with huge grains of salt i only have some knowledge on how electronic works. cheers!
0
J

cas6 said:
I had bypassed a fuse for a graphic card once it worked once but went up in flames a couple of minutes later xD. However, in this case it's a capacitor and if it's still working it would probably knock some fps performance off the card a little bit due to unstable current fluctuations(?) and if you're not overclocking it should be fine.

*please take my words with huge grains of salt i only have some knowledge on how electronic works. cheers!
Click to expand...

maybe there was a short in your case… but in my case its still working perfectly fine.

actually, im getting a higher stable overclock now. I dont know if its because of the thermal paste or those capacitors i knocked off were “preventing” the card from reaching its full potential. Which i doubt.

it could just be the paste, and i would get even higher performance by repairing those caps. But im just worried that the wrong value or polarity would damage the card…
0
N

that thing is compromised and could possibly become a hazard, the right thing to do would be to replace it
0
J

I want to bump this thread up again to give an update on the situation. It may be useful to anyone who breaks off some smds on their gpus.

the card never crashed in synthetic tests such as furmark or heaven. But it started to crash recently in real world usage.

to recap, the smd’s i broke are capacitors, they are ceramic caps and unlike electrolytic or tantalum caps these do not have any polarity. I found a lot of these in aliexpress for cheap but there are many different values.

Since there obviously isn’t any value written on it i just decided to use caps that are the same size. I can’t estimate the exact size based on pics online so i just got some from an old board i have.

here are the results: 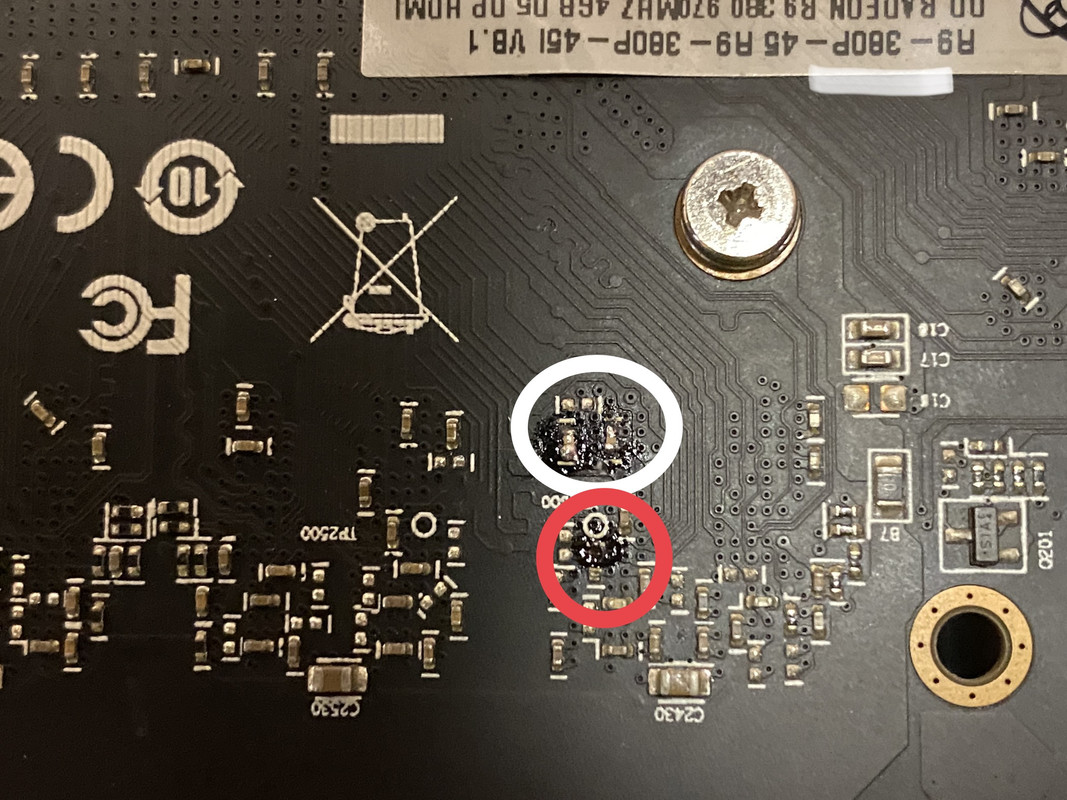 if you would notice, the caps are soldered badly cause i used a regular soldering iron. The hot air gun would blow off the caps even at minimum speed, i already lost 7 caps. But im very sure that the caps were soldered well and aren’t shorting out

circled in white are two caps that i did successfully, the one circled in red had the solder pad ripped so i cant get a cap on there. I could scratch off the pcb traces but it would be too small and i might scratch off another trace and short something. Maybe if i had a microscope or something…

there was a fourth much bigger capacitor that broke off (not pictured), i guess that one was the real culprit. Was able to solder that with the hot air gun so that one looks much better.

so to recap, these brown caps are ceramic caps and don’t have any polarity, so if anybody were to break some off, you dont need to worry about that. I don’t know about their ratings but i just try to match the closest size. There are also black and green ones, which are resistors and fuses respectively i believe. Those have markings to I think it would be much easier to find the correct one for those.

i think i watched a video before from buildzoid, i believe, stating that some caps are intentionally left out of the gpu as a way of cost cutting for lower models. Im guessing the lower model would be something like a sapphire 5700xt nitro pulse vs something like a nitro+.

makes me wonder what would happen if i saturate all the empty spaces of this card. Might give better overclock. Might not… im not sure if all the empty pads are for caps or what. I wouldn’t want to waste a perfectly working card just for my curiosity. 🤔 what if i buy a defective card and experiment with that…
You must log in or register to reply here.
Share:
Facebook Twitter Reddit Tumblr WhatsApp Email Link