About 3 months ago I bought a prebuilt PC (a Medion Erazer Engineer X10 MD35188) that was on sale for 1400 bucks. I know, a prebuild, stupid decision, but I was desperately in need of a new pc so decided to go for it. The specs are an RTX 3070 with a i7 11700, so that all looked very good. I checked some benchmarks on YouTube and did some research on google to make sure it would be getting some nice FPS. And it looked like it did. Now I can't say that I'm completely unsatisfied, since it's still a huge upgrade from my gtx 1060 and i5 6400, but my pc isn't hitting the FPS that it's supposed to according to benchmark vids made by people with the same specs running their 11700's at 4.3something ghz. What I'm suspecting to be the problem is that the CPU is running at about 3.6ghz under full load while gaming. On single core performance it's supposed to run at 4.9ghz and on all 8 cores on 4.4ghz. So the 3.6 is way too low. At least I think so? I'm not an expert but that's why I'm here. This results in me getting 90fps in BF5 instead of 120-130ish. I've been trying to play around with the bios, but Medion used their own motherboard locking most of the BIOS settings (sigh). Does anyone have any clue why while gaming it never runs over 3.8ghz on CPU dependent games? And does anyone know how to up the speed so I can get the experience this badass pc should be giving me? Any help would be greatly appreciated.

Thanks in advance for your time

Some B560 motherboards have poor voltage regulator cooling so I am not sure how high you can increase the turbo power limits before you run into VR cooling issues. I would set both PL1 and PL2 to 125 W and see if that helps. If you cannot find these settings in the BIOS you can use software like ThrottleStop to increase these power limits. Check the MMIO Lock box if you see any numbers in the MMIO row. 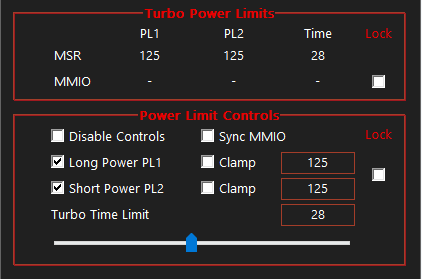 See if you can install CPU-Z and verify what motherboard and corresponding BIOS version you've got to work with. Along those lines, if you're on Windows 10, please mention the version(not edition) of the OS.
0

Hi Lutfij. Thanks for your response. I'll attach the MOBO info to this message. The Windows version I'm running is Windows 11 version 10.0.22000. If you need any more info, please let me know

Some B560 motherboards have poor voltage regulator cooling so I am not sure how high you can increase the turbo power limits before you run into VR cooling issues. I would set both PL1 and PL2 to 125 W and see if that helps. If you cannot find these settings in the BIOS you can use software like ThrottleStop to increase these power limits. Check the MMIO Lock box if you see any numbers in the MMIO row.

@uWebb429 You're a hero! This must be the problem. I just checked other benchmark videos, and they all had their power limit set to 125 instead of 65, which is probably why they get so much more FPS and speed than I do! I checked the BIOS and indeed since it's very limited I can't find a way to up the power limit through there. So I'll give it a go with ThrottleStop. That should do the job as well then. One little question about this though, will this affect the CPU in any bad way? Or just temps and fan noise? And is this a standard intel thing that it's locked to 65, or did Medion lock it? Anyways, thanks a lot for the solution .
0

Limiting a 125W CPU to only 65W is also not going to hurt the CPU. Higher end motherboards provide options in the BIOS to make these sort of adjustments. When the BIOS is lacking, you can almost always use software to change the turbo power limits.

The Medion bios simply reads the default value from the CPU and has likely set the PL1 power limit to 65W. That is the Intel recommended value for the Core i7-11700 non K series CPU.

If you need any help, post some screenshots of your ThrottleStop settings and upload a log file somewhere. The log file will show if there is any VR throttling when trying to run your CPU at the higher power level.
0

@NexxOne_
Intel's definition of too hot is 100°C. What is your definition? No one is frying their CPUs at these temperatures. These are normal peak core operating temperatures for Intel CPUs. Thermal throttling automatically reduces the CPU speed to prevent any damage due to high temperatures. This is not something to worry about no matter what the power limits are set to.

Anything that you have done can be undone. Set PL1 back to 65W and your CPU will be the same as before.
0

@uWebb429 fair. It was running at 90 degrees I believe. I set it back now, (apparently I needed to restart my pc or something since it didn't work before, which led to some slight panicking. I'm not an expert at these things as you might've noticed. I got it back to 65w for the time being and will experiment with it a bit. Thanks for all the info and help, sounds like I can safely see what I can do then hehe. At least I now know what the issue probably is since it does seem to be a power limit issue.
0

NexxOne_ said:
It was running at 90 degrees
Click to expand...

90°C is a big number but it is still within the 100°C Intel spec. Intel CPUs are well designed and well protected against any damage.

Another useful feature of ThrottleStop is you can use it to reduce the CPU core and cache voltage. This helps reduce power consumption and heat. Set both of these to a negative offset of -50 mV and go do some testing to make sure your CPU is game stable when running with less voltage. Some computers are stable at -75 mV or -100 mV. You will be surprised how this helps the temperatures when running at the higher power level. Remember to set both the core and the cache to the same value. Here is an example of setting a negative offset voltage of -50.8 mV. 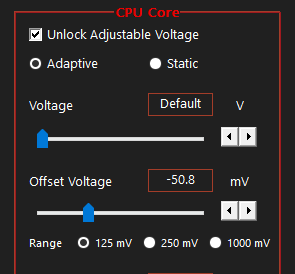