You can look on Ebay and Aliexpress though you should be investing in that generation of hardware/ecosystem.
0
J

Yes they are on EBay.

Thanks, I am also running a p6tse board with a 960 cpu, 24gig ram, decent gpu but want to maximize the cpu
0
J

ChrisJJ said:
Thanks, I am also running a p6tse board with a 960 cpu, 24gig ram, decent gpu but want to maximize the cpu
Click to expand...

My P6T originally had an i7-920......so it was quite an improvement. from what I recall the performance difference between the 980 and 990x is pretty small.
0
C

I have a P6T Deluxe and it's not specced to run on that either....but I've heard Xeons can sometimes run in place on certain boards.....even when not on the list.....but I wouldn't know with these boards specifically.
0

If you're gaming on this old platform it's going to suffer a bit. I had a i7 920 in my Gigabyte U3DR mobo and installed a 960 with a mild overclock to 3.8GHz. This didn't help with micro-stutters in some games such as BF V when using a RTX 2070S.

That was my first real gaming PC and it's still running today. The biggest upgrade to improve performance was an SSD. But it's been retired from gaming.
0

The Xeon W3680 is exactly the same as the Core i7-980X but the Xeon always costs less. Both have an unlocked multiplier so they are easy to overclock on any X58 motherboard. The Xeon W3690 and i7-990X are the same CPU. All of these overclock to more or less the same speed so no need to spend extra money on a more expensive processor. 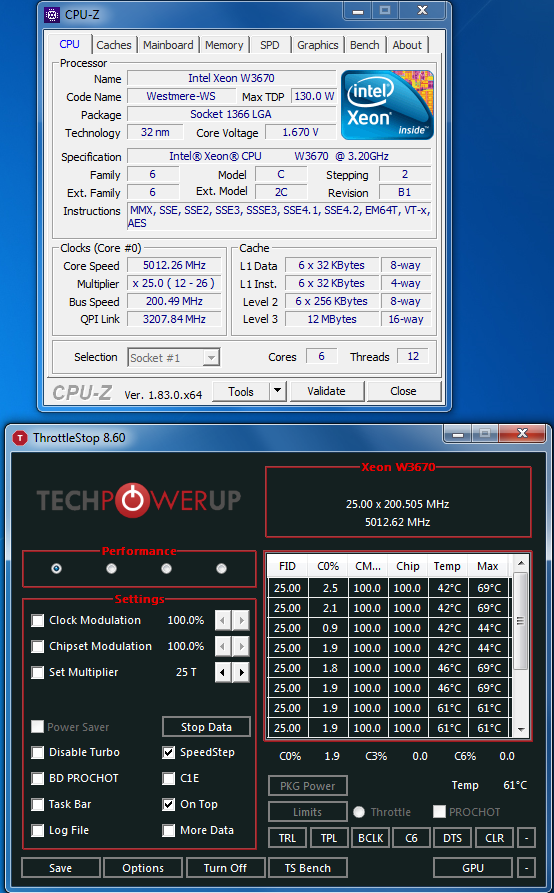 Generally ebay is your best bet for sourcing CPUs of this era, although AliExpress can also be useful.

I cannot say for certain, but I would be very surprised if your motherboard did not work with Xeons. Most X58 boards can accept Xeons even if the board doesn't specifically list support for it.

For example, I use the X5670 on an MSI X58A-GD65, which doesn't officially support any Xeon X series chips. My Asus Rampage iii Formula doesn't have support for any Xeons officially, but has worked with both the x5670 and e5620 I have tried.
Reactions: uWebb429
You must log in or register to reply here.
Share:
Facebook Twitter Reddit Tumblr WhatsApp Email Link