The 2nd one.
Thermal pads, such as in the 1st link, are not as effective as using thermal paste.
0
E

The Thermal Grizzy brand is of poor value, but if you really care about a 1-2C edge, go for it.
Click to expand...

1. The results at pictures might be little confusing. First I start 6core stress test and than single core test. So max values are from both single and 6core test. I 've made one more single core test and there was throtling at 3 cores. It looks like thread is jumping from core to core.

2. What do You thing about this application of liquid metal. There is a gain 20 deg. C.
View: https://youtu.be/hdTsra-uLBI?t=429

Although this laptop has normal thermal paste reseller offers application of liquid metal at new laptops as well as requested. So maybe I should go for it?
0

Ok, so it did run single core, but it switched cores... but each one throttled.


Liquid metal works pretty good IF DONE CORRECTLY.
Choose to have the LM application done ONLY if the reseller offers to cover you for any damages caused by the LM. 2 things can happen if it's done incorrectly.
1)Dead cpu - LM is electrically conductive, so if ANY comes into contact with one of the transistors(?) bordering the processor die, the cpu is as good as done.
2)Having to do multiple reapplications. If done right the first time, it will last the lifetime of the laptop.
How to know if wasn't done correctly? You'll notice over time the cpu getting warmer and warmer under load.
Reactions: PC Tailor
0
D

1.If it is a gaming laptop sure it has proprietary control center where you can choose between profiles like: Performance, turbo, silent, manual .try to play with them.

2.If you are using windows mode do not use slider, but right click on battery icon > power options and there select high performance.

The easiest way to see if you can get 4.5GHz on a single thread is with Prime95 small fft. You can load up just 1 worker (1 worker = 1 thread). At the load screen make sure AVX / AVX2 is checked/disabled.

Higher frequency = more work = higher heat. So you only get maximum boost on 1 core. With 2 cores, cpu gets hotter, so automatically downgrades the boost to prevent overheating. Same with 3+ cores.

Changing Tim or cooling solution doesn't change this behavior, it's part of the firmware. Laptop bios doesn't allow all core OC at max boost because you cannot change the cooler, it has a limited capacity for heat dissipation.

The turbo is linked to AC power, you'll only see 25w when plugged in, on battery you'll run at 15w. This is where heat plays a vital role, because the laptop isn't powered by AC, it's still powered by the battery, supplemented by the charger. It's the battery that gets hot and slowly drains. What you'll find is that under seriously heavy usage, after a while the battery gets to critical condition, it's almost a fully uncharged battery. At that point, the laptop will cut back to 15w usage, fps goes in the toilet and cpu goes into power saving mode. Because it's the battery overheating after massive, fast discharge, not the cpu overheating.

So bios won't allow full locked core turbo in an effort to save the battery from overheating and exploding.

Playing stock minecraft you'll see @4.4GHz, it's a simple game, single threaded. Playing GTA5 you'll see 4.0GHz because it's 8 thread optimized running on 6 threads. The speeds will change according to exactly which game you play, and nothing will change that.

Fan pads and other external coolers don't cool the cpu. They cool the battery. Batteries are more power efficient when cooler, so the length of time it'll handle heavy usage corresponds to its temp as AC power tries to keep the battery charged. A hot battery will drain faster, you go into power saving mode faster. Most ppl see it as the cpu overheating, it's not, it's the battery affecting running power.

The battery heat also affects the cooling of the cpu, and vice versa, the heatsink getting very hot with excess wattage dissipation is also heating up the battery and a hot battery affects the cpu ability to stay cool, lowering its range of capacity. By cooling the battery, the cpu heatsink isn't as much affected, so has greater dissipation ability, cpu stays cooler under load.
Last edited: Oct 10, 2019
0

ePsxf said:
I have done Cinebench twice for single core. Unfortunately there is not 4.5GHz. 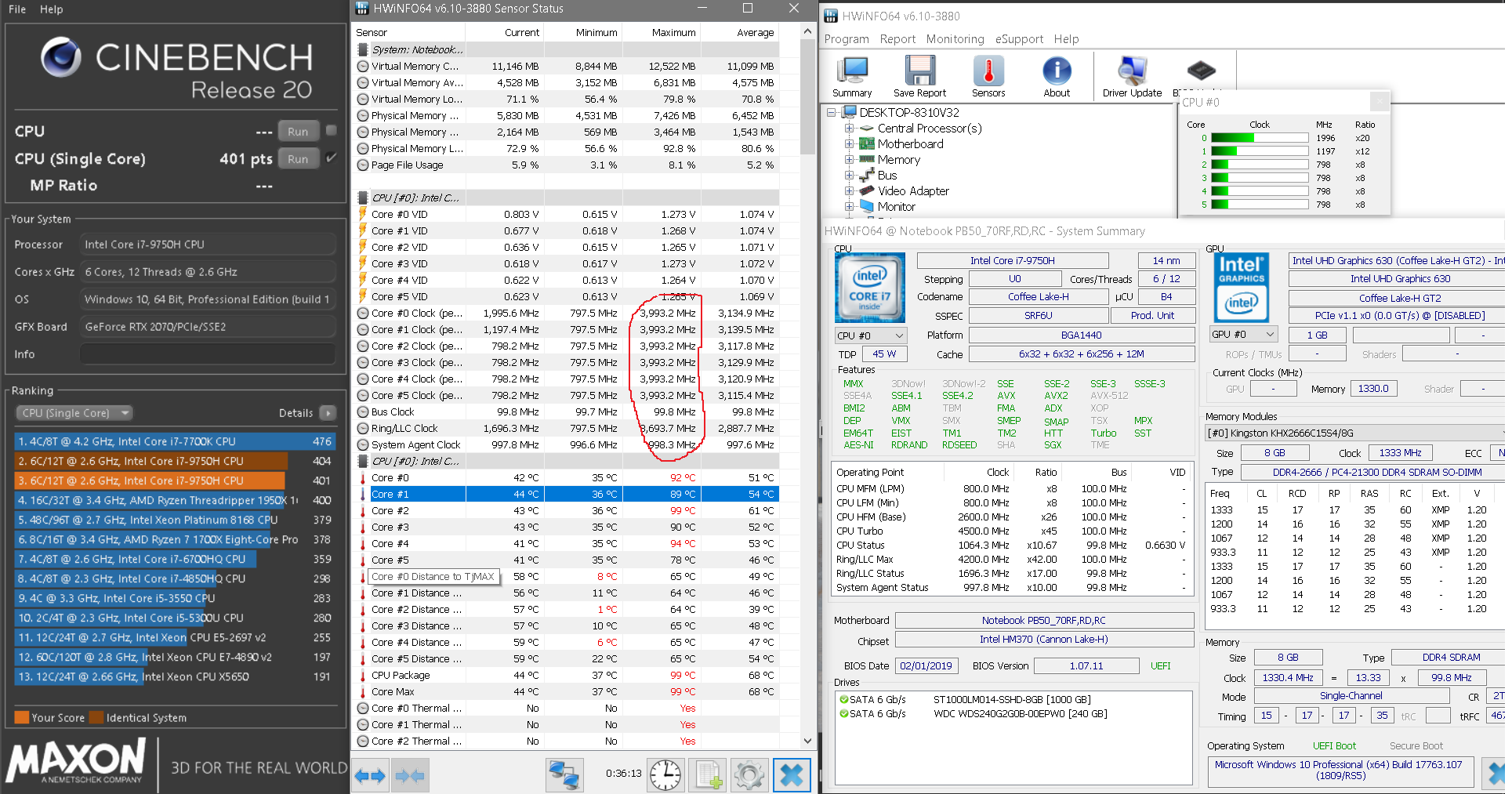 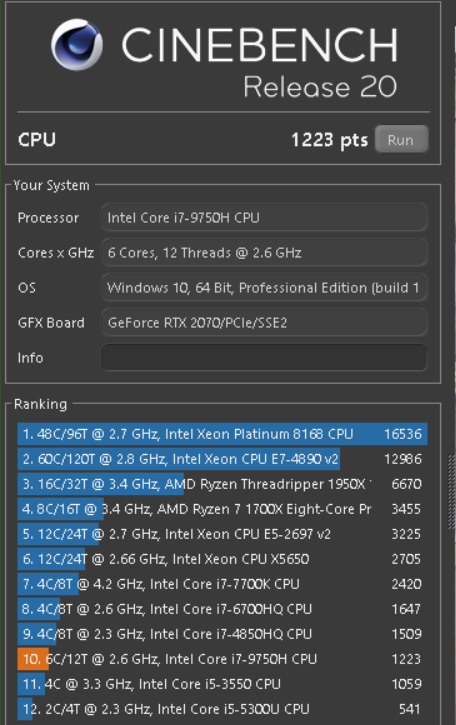 So cooling pad or liquid metal will be tter like:
Thermal Grizzly Conductonaut 73W/m·K
?
Click to expand...

I believe you already reduced your cpu voltage. I used core offset -0.150V in Intel Extream Tuning Utiliy and from 1500 pct I scored over 2800 pct. Reason was the Thermal Throttling. The problem with this CPU is that is always trying to increase the clock speed when temperature allows. This is why in games ie BFV is often over 90*C.( Is possible to reduce the FPS to 60 by default and will help with the CPU temperature. If not, in W10 advanced power option , choose maximum processor state less than 100%.
0

ePsxf said:
I have i7-9750H in my gaming laptop. It has up to 4.5GHz in turbo mode.
https://ark.intel.com/content/www/us/en/ark/products/191045/intel-core-i7-9750h-processor-12m-cache-up-to-4-50-ghz.html
But for some reason it never reach this 4.5Ghz.
When I put stress test(AIDA64, Windows10) it stays at 4Ghz even at the beginning of test.
I am using CPU-Z and CoreTemp to mesure frequency.
I put power mode(Win10) to max. and laptop control center to max performance. Laptop is plugged in.

How to hit this 4.5Ghz at least in short periods?
Is it average frequency?What software would show me frequency at all 6 cores?
Click to expand...

I fear that you will never reach 4.5Ghz. From my experience, laptops are not designed for heavy gaming and heavy load. My 4820HQ would still hit 90C with max fan speed and throttle after replacing CPU and GPU thermal paste with the best, Kryonaut, and using a cooling pad. Your only way is to undervolt your CPU and GPU and even then you will still not see 4.5Ghz, 4.2Ghz maybe.
Reactions: Phaaze88
You must log in or register to reply here.
Share:
Facebook Twitter Reddit Tumblr WhatsApp Email Link