I've got problems with my PC. Lastly I've seen fps drops in games and I started to searching problems after my aio pump was broken. Temps of my actual CPU with AIO are about 80C during stress test and the peak I've seen during streaming was 93C. Yesterday I've downloaded IETU and do strees test to see the CPU is thermal throttling and it is not but it is power throttling instead. GPU is working perfectly fine, PC isn't shutting down or do anything else.

You have to show all the settings pages of IXTU for people to help you, if you have your bios setup for all core overclock at 4.9 then that would be a reason for the CPU to never go above that. Also if you have set a power limit in bios then reaching that limit would count as power throttling, it "slows down" doesn't increase clocks anymore when reaching this limit.
0

Well my CPU isn't overclocked at all. I've do nothing with bios to be honest.

The rest is just basic. I didn't even touched anything more, so settings are default for my CPU.
0

Nervoushq said:
I've do nothing with bios
Click to expand...

That is the problem. At default settings, most motherboards will limit a 10900K to its 125W TDP rating. The CPU will slow down during a long term stress test so it does not exceed 125W. The default turbo time limit is 56 seconds.

If you have good cooling, set the PL1 and PL2 turbo power limits higher in the BIOS. I have an AIO cooler so I set both limits to 300W. No more power limit throttling.

Enable the C states in the BIOS if you want your CPU to run faster when it is lightly loaded.
0

Well I've got Navis RGB 240. I'm a little frightened too about my 750W PSU and more TDP on CPU. Is it safe for my case? If yes, then please someone help me with ROG Bios and show exactly what should I change because I'm totally noob in this.
0

Nervoushq said:
frightened too about my 750W PSU
Click to expand...

My Asus BIOS calls the two power limits the Long and Short Duration Package Power Limit. I set the Power Time Window to 28 seconds which is the default value that Intel used for years. The default time limit for a 10900K is 56 seconds. If both power limits are set to the same value, the time limit does not matter.

This setting on my Asus board is in the Ai Tweaker / Internal CPU Power Management section.

Many motherboards set both power limits to the max, 4095W. No CPU can consume this much power so your house will not start on fire if you use this value. This is the largest number that the power limit register can hold. It just tells the CPU to ignore the turbo power limits.

Intel XTU should allow you to adjust the turbo power limits if you want to experiment that way. I use a similar program called ThrottleStop so I can adjust the power limits while in Windows. These limits can be adjusted in real-time while the CPU is loaded. This makes it easy to see the CPU frequency increase as the power limits are increased. 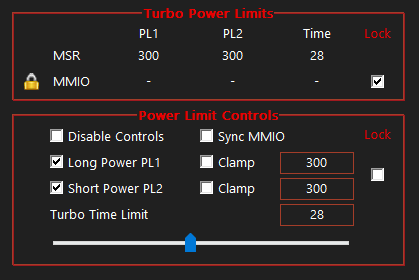