Question If one installs a graphics card, does it take precedence over the graphics part already in the computer?

I just installed an AMD Radeon 109-C09057-00 V218 VER 7.1 PCIe Graphics Card. The card is configured for PCIe and there are sockets it fits in, but the mounting/metal part did not correspond to my computer's frame, so I just removed the mounting bracket and installed it. I carefully hooked the HDMI cable to it; it runs to my AV receiver.

BUT I got no signal - no sign of the computer having booted up.

The thing is, I kept the monitor hooked up to the old (VGA) socket. Does that no longer work? Was the old output "defeated" by the new graphics card?

That's my main question for now. Thanks for your help!

OK. I understand that. But how do I - or can I? - connect the computer to the receiver? Looking at the manual for the receiver, I don't see any mention of the possibility of connecting a computer to it. I mostly wanted to send the audio signal to the receiver and keep seeing the video the way I had it.

And since the output connection on the graphics card is a DMS 59 port, I bought a DMS 59 - to - HDMI converter. Then I used HDMI to connect computer to receiver. I'm not at all sure this works. Since I couldn't see anything on the monitor, when it was connected to the old output, I assumed nothing was working. But might there have been audio going to the receiver?

Isn't it possible to run the video signal for the monitor "through" the receiver, to collect it at an output point?

What exactly is the purpose of this card?
How are you connecting HDMI cable to your pc? There are no HDMI ports.

Yes, that's true. I have a DMS59 to HDMI converter. I suspect it's not adequate for the purpose. Maybe I should get a card with an HDMI socket?

haskellbob said:
I have a DMS59 to HDMI converter.
My purpose is to send 7.1 audio to my receiver.
Click to expand...

DMS59 has no audio signal in it. That graphics card has no purpose.
What you could use is Display Port to HDMI adapter.

And just use the graphics of the computer - no graphics card? I doubt the computer has 7.1; maybe it has 5.1? Sorry for being green about all this. But one starts at the beginning, right? things have changed a lot since my dad's Heathkit AR-15 was the coolest hi-fi in the world!
0

I'm extremely confused by this. Is there no desire to improve the graphics of this PC? Because that's why you purchase a GPU. Graphics is in the name after all!

I feel like I'm missing a key fact, because from what's laid out here, this sounds a bit like the equivalent of buying a blender because you want to heat up soup. Could you start from the beginning and outline exactly what it is your full goal is here?
0
H

My goal is only to send a 7.1 audio signal to my 7.1 receiver. I think I went in the wrong direction. Since the graphics card I bought contained "7.1" as part of its description, I thought it would send both audio and video to the receiver from the computer, and I would take the video back out of the receiver to the monitor.

I get the sense that I'm approaching this the wrong way. I really only care about audio; I don't even know what improving "graphics" means. I like to watch movies on my monitor with the audio from my receiver, but all I get right now is simulated 7.1 - not the real thing.

Are there ways the video could be improved on movies? I don't play any video games at all, except for Free Cell.
1
R

What you need is a sound card not a graphics card; you are trying to solve a problem using entirely the wrong type of hardware. A graphics card is for accelerating 3D tasks, such as editing video, rendering models, or gaming.
0

Yup, 7.1 means that if the GPU is connected to a monitor that has 7.1 sound that it'll work like that. You can't just send a GPU's normal video with audio signal to an audio receiver like this; they don't talk the same language.

As RTX 2080 notes, what you were looking for this whole time was a sound card, not a graphics card.
0
H

I see that you guys are right. Thanks for pointing this out. There are sound cards with HDMI outputs. I guess there are corresponding HDMI inputs on the receiver that will accept audio only? There aren't 8 separate RCA jacks, of course, so HDMI must be the way to go, even for audio only. Right?
0

haskellbob said:
I see that you guys are right. Thanks for pointing this out. There are sound cards with HDMI outputs. I guess there are corresponding HDMI inputs on the receiver that will accept audio only? There aren't 8 separate RCA jacks, of course, so HDMI must be the way to go, even for audio only. Right?
Click to expand...

I have a Sony AV Receiver, with multiple HDMI inputs.
It accepts video and audio from multiple sources. The TV, the cable box, HTPC....Outputs the audio to the 5.2 speakers (soon to be 7.2)
It is the central hub for AV propagation. Select the desired input, and a single video out to the TV, and audio out to the speakers.

From the HTPC, I can choose to display video to the TV as well as the audio, or just the audio.
0
H

Cool. So I can keep the monitor connected to the PC where it is, and process just the audio to the receiver (right?). Good feedback; I'm on the right track now, I think. Time to shop for a sound card.
0

haskellbob said:
Cool. So I can keep the monitor connected to the PC where it is, and process just the audio to the receiver (right?). Good feedback; I'm on the right track now, I think. Time to shop for a sound card.
Click to expand...

well.....Do you want the PC video and its audio to the monitor, as well as a different audio stream to the receiver?
My HTPC outputs HDMI aud and vid from the GPU.

Lets back up to what you want to do, and what equipment you have now. From there, we maybe determine what you need, and how to do that.
0

What's the model name of your audio receiver? Does it have optical audio input?
If it has, then you could use sound card with optical out to connect to your receiver.
0

HDMI receiver with hdmi inputs and a hdmi output??

HDMI out from gpu to hdmi input on receiver.

HDMI out on receiver to hdmi in on monitor.

Its as simple as that.

You'll get audio from your receiver speakers and video on your monitor.
0

madmatt30 said:
HDMI out from gpu to hdmi input on receiver.
Set audio output on pc to amd hdmi audio.
Click to expand...

Yes, I'm trying to get 7.1. By the way, my Sony STR DN1080 supposedly is equipped for Dolby Atmos, but I have never found any setting for that... MEANWHILE, I don't even know how to get 7.1.

I'm puzzled by one thing, though. The several options for "Listen" on the receiver menu do not include any HDMI input. Would I have to go to "Watch" and pick "Video 1", and plug the HDMI coming from the sound card into the "Video 1" input?

My idea is that I would just keep using the monitor output on the computer for the video side of things. Is that not viable?

This is all so complicated. I might have to content myself with the synthetic surround created by the receiver from the regular RCA stereo input... But I don't like to give up, so I will persist.

Thanks for help to everyone who's offered some!
0

That "Sony STR DN1080 " is literally the same one I have.
It is sitting over on the other side of the room.

HDMI from the PC/cablebox/etc, HDMI out to the TV or monitor.

Select which HDMI input you want to use, and it plays out to the speakers and monitor as indicated.

Just this afternoon, I was playing audio from the PC, through the Sony, out to the 5.2 speaker set.
Later, I was watching a movie with that same path.
Later still, Netflix from the TV Netflix app, to the Sony, audio out to the speakers.

That receiver is the central hub. 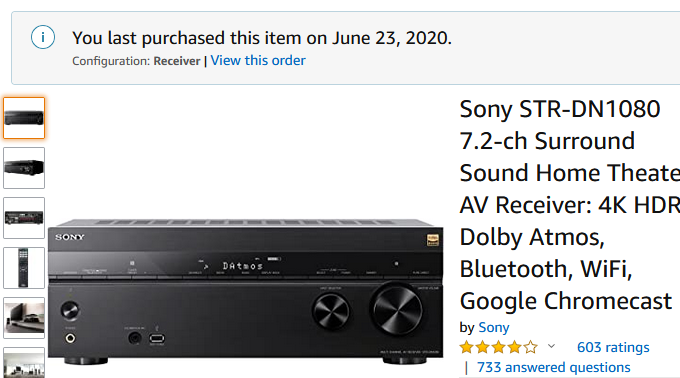 The HDMI from the PC does both audio and video.
Either the integrated GPU on the motherboard, or a dedicated GPU that you installed, with an HDMI port.
The "GPU" you've purchased is not that.
0

Basically, ONE HDMI cable from the PC to the Sony.
Plug it into the port labeled "Game"

ONE HDMI cable from the Sony to the monitor.
Plug it into (TV) Out A

It's cool that we have the same receiver! I have never found out how to use Dolby Atmos. Do you know? And what kind of card would I need to get both audio and video into the HDMI cable? Would that be a graphics card? Couldn't I keep the monitor connected at the old slot on the PC (which is VGA or DisplayPort) and just send the audio to the Sony? Using the "Video 1" input and fooling it by just sending audio? Maybe my computer is not capable of sending the discrete eight separate channels involved in 7.1? A lot of questions, I know.
0
H

USAFRet said:
The HDMI from the PC does both audio and video.
Either the integrated GPU on the motherboard, or a dedicated GPU that you installed, with an HDMI port.
The "GPU" you've purchased is not that.
Click to expand...

Can I adapt the GPU on the motherboard to HDMI, maybe using the DisplayPort socket? If not, could you give me an example of a dedicated GPU that would work? This one https://www.amazon.com/dp/B006MBP7R2/ref=dp_cerb_2
is described as a "video graphics card". It has an HDMI slot but I personally would think, from that description, that there is no audio. Is that just inaccuracy in the description, or is this card incomplete for what I need?
You must log in or register to reply here.
Share:
Facebook Twitter Reddit Tumblr WhatsApp Email Link