Hey everybody. I want to upgrade the storage on my machine but I have a couple of concerns I would like some advice on.

I am happy with my SATA SSD as a boot drive, and everything runs pretty snappily from it. The only issue is the capacity.
I use this machine primarily to play games and I have to install most of them on the 2TB HDD. This is not so snappy... in fact the load times are distinctly pedestrian. For this reason I would like to add a 1TB SSD to the machine, to use as a game drive.

The motherboard does have an M.2 slot, however I believe it is a PCIe 2.0 2x slot, which does not provide the bandwidth that modern NVMe SSDs require. I am considering either getting another 2.5" SATA SSD (probably a 1TB MX500 or BX500), which should pose no problems, or I could buy an M.2 drive. Seeing as a lower speed M.2 NVMe drive such as the Intel 660p is only around $10 more than an MX500 right now, but offers faster speeds, I would prefer to go for this option but I have two concerns:
I would very much appreciate any advice on this as I think I could give myself a lot of headaches if I jump in a buy a fancy M.2 drive which isn't compatible and messes up my current storage regime.
0

Here is the data sheet for your motherboard from MSI https://us.msi.com/Motherboard/Z97M-GAMING/Specification. SO yes the Intel 660p will work along with any PCIe 3 or SATA M.2 drive. I would pick up the Crucial P1 over the 660P


* The SATA5 and SATA6 ports will be unavailable when installing a module in the M.2 port.
** M.2 PCIe interface only supports UEFI option ROM, NOT support legacy option ROM.
*** M.2 PCIe interface does not support RAID 0, RAID1, RAID 5 and RAID 10.
**** Supports Intel Core processors on Windows 7 and Windows 8/ 8.1
0

For that board, you'll not get full performance from a good NVMe M.2 drive.
The above mentioned Crucial or 660p are good choices.

Or, simply another SATA III SSD, in whatever size meets your needs and budget.

I have a Z97, and added the 660p in a PCIe slot adapter.
I use the adapter instead of the M.2 port, because I didn't want to lose any SATA ports on the motherboard.
Drive list in my sig below.
0
B

Thank you, both, for the replies. That confirms what I thought about which SSDs would be most appropriate.

Richiestang_78 what is the advantage of the P1 over the 660p? Currently it looks like the 660p is cheaper online.

USAFRet - that is an interesting option, presumably you can get more bandwidth for the SSD if you use the PCIe 16x slot with an adapter. Have you found that to be the case? Was the comparability ok? How much do these adapters cost?

Can anyone speak to my concern about moving the HDD to a different SATA slot?
0

I have this adapter for use with the 660p.
https://www.amazon.com/gp/product/B07GFDVXVJ

As a secondary drive, not the OS drive.
It provides the full performance of what that drive can do.

In my particular use, you cannot tell the difference between that and a standard SATA III SSD.
Even though the advertised benchmark is 3x a SATA drive. 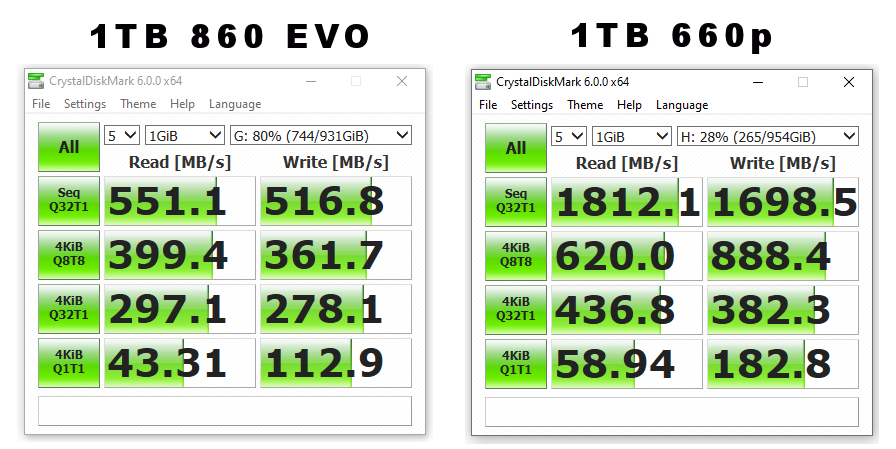 In my typical use case, Adobe Lightroom...I defy anyone to tell the difference in a blind test.
Big benchmark diff. No user facing diff.
Last edited: May 3, 2020
0
B

Thank you both for your advice. It looks like my new graphics card obscures the second PCIe x16 slot so I am going to go ahead and try the M.2 slot on the board itself.

Seeing that the Crucial P1 1TB is out of stock at the moment, I'll probably pick up the Intel 660p. Thanks again for you help.
You must log in or register to reply here.
Share:
Facebook Twitter Reddit Tumblr WhatsApp Email Link