Okay, it appears that we are finally getting some confirmation on the 'nomenclature' of some of the upcoming ARC A-series gaming desktop GPUs from Intel. Specs aren't fully confirmed yet, just the SKU model number. Should be legit and final since the drivers have them listed.

Intel's Arc Alchemist gaming graphics cards for desktop PCs have been confirmed in the latest GPU driver release. The 30.0.101.1732 driver version brings new game support and optimizations for the Arc A-series mobility GPUs such as Arc A370M & Arc A350M, but it also reveals the desktop cards in their final naming scheme.

There are a few variants missing in the drivers such as the Arc A350 but it may release later hence the preliminary support is being added to the listed cards. Only five upcoming gaming desktop SKUs have been confirmed : A770, A750, A580, A380 and A310. 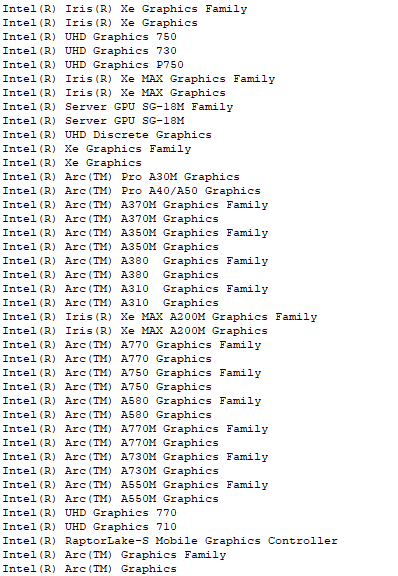 The Arc Alchemist lineup will include the flagship Arc A770 which will feature the full Arc ACM-G10 GPU with 32 Xe-Cores and a 256-bit bus interface. The previous rumor did state that the Arc A770 will come with lower memory and it looks like it was essentially an entirely different SKU as it will feature both 16 GB and 8 GB flavors. The core specifications will remain the same.

As for the entry-level lineup, Intel is expected to have three offerings, the Arc A380, A350, and A310. The models are likely to feature 8, 6, and 4 Xe-Cores with the top variant rocking 6 GB GDDR6 (96-bit) memory and the other two models featuring 4 GB GDDR6 memory (64-bit). The entry-level lineup will compete against NVIDIA's 3050 & AMD's Navi 24 offerings. In addition, to the gaming variants, Intel will also have two Pro variants, the Arc A50 and Arc A40. The first could utilize the ACM-G10 GPU while the latter could utilize the ACM-G11 GPU.

Speculation::
Lastly, there's one model that has so far not been confirmed and that's the Intel Arc A780. I don't know what this offering is going to offer over the already flagship A770 configuration but this could very well be the 'Limited Edition' model which Intel teased few months ago.