Question Just replaced all the old water in my customer loop. Should I bother buying a biocide?

Long story short I built this PC in 2015 and slightly upgraded it in 2017. Since then I haven't added any additional hardware, and I stopped properly replacing the water in the water loop years and years ago. It uses EK parts (water pump/reservoir combo, 1080 Ti Hydro Copper attached, motherboard/processor has a waterblock, and there are also 2 quad-size radiators with 4 noctua fans. I originally had the water colored blue in 2015. A few years later I tried to flush it out and change the color, but it became a nasty purple.

Anyway, here we are now: I used over 9 gallons of distilled water and flushed out the system fully. It's pure now. However, I forgot to buy a biocide for it. But here I am thinking that it worked fine without it for like 5-6 years.. So whats the harm in not adding it?
Thanks!
0

So you're working with distilled water in your loop at the time of writing? What fluid did you use prior to the flush and the color addition? I recall EKWB stating that their nickel plating would end up corroding or damaged if you used otheradditives and heavily marketed their own range of coolants. You should still be fine with a kill coil if only on distilled water.
0

Many EK parts in this pc loop but it accidental. Had not heard that about there nickel plate parts good to know. For me not much of the fan of there line of coolants but it different for everybody. Have been running on water for year with biocide and inhibitor. Had to clean out loop recently and clean out block, tubing and fitting. Everything look ok to my eyes. Would maybe say if you had good luck no biocide then would continue.

This old photo many things changed. Enjoying the water cooling. 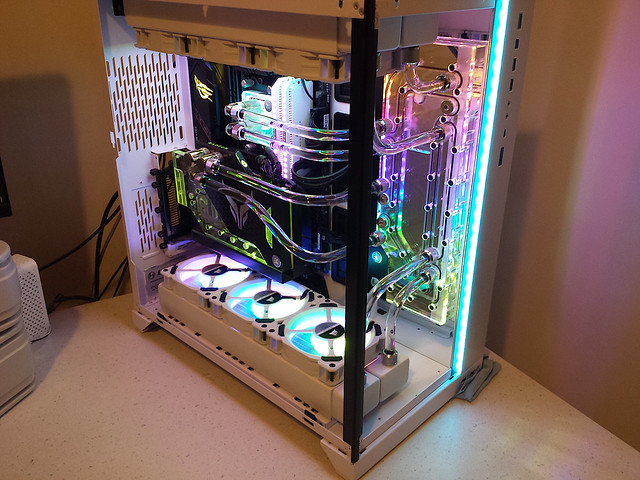