You have a Ryzen. It's not an intel. It doesn't respond, work, act like an intel. So everything you've become accustomed to with Intel thinking, you can throw out the window.

Ryzens work best on Balanced power plan. That's direct from AMD, they even got together with Microsoft and created a Ryzen Master Balanced solution, so either that or Balanced is what's needed to be used. Ryzens have their own performance boosting, PBO, so do not need windows to add to that, in fact it interferes with how Ryzens work, especially concerning idle voltages and core usage.

Yes, you can put fans in front. It may require removal of the front facia to do so.

Utilization is pretty useless. It's not how much of the cpu potential is used, it's how much resources the cpu uses to process whatever its working on. It's like putting a nail in a piece of trim wood, you'd not need to use a sledgehammer, just a small hammer, but you'd still put it in as fast as you can, but not use the full strength of your arm no matter how fast you swing.
Reactions: Gfost73
1

I've had these fans, and they do not move much air at all.. in fact you almost have to be touching the blades to feel any wind from them. but they do move air I suppose as the dust covers I had in old system did get the fans outline from dust, but I wouldn't say they would be any good for actual cooling, more just to move air around, and even that wasn't much , but for the needs of my old PC, they were fine
1

That's max. My fans run 450-700rpm normally, only ever see max under stress tests. So is max speed and consequently more noise really a consideration?

They have their own rgb controller and remote, so basically they are universal. They are normal 12v fans, so that's not an issue for control there. Rgb and fan are seperate.
1

that remote... don't even get me started on that thing.. lol.. let me say , you get what you pay for... do these fans move air, sure, do they do it very well, id say no, but for the price are they suitable, sure as long as cooling isn't what there used for, like I not use these for Rad Fans.. that controller, if your lucky works.. the one I had half the functions did not .. but as I more or less left mine as a solid color it was still ok for my needs. don't expect much more than pretty colors though as the air pressure they create is little at best . and these fans ALWASY run on max.. no way to lower, that said 1100 is silent still ..
0
L

Oh okay... Could you recommend some cheap fans? Don't have to be RGB but it would be nice. Also, I did the CineBench R20 and my CPU reached 90 degrees before I closed the program. Is this normal? I am using the stock cooler...
1

how are you reading the CPU temps? (which program? ) 90s seems hot, running cinabench on mine I only peak at 57°C.. I use ryzen master and Hwinfo64 to monitor my temps (both say same results) .. as for cheap fans, those are ok for cheap fans, but don't expect too much out of them.. they do move air around so will be ok set up as exhaust and intake, they are quiet even on full, the controller (although mine did have issues) .. wasn't too bad and you do get a lot of cool presets. but like I mentioned there not so great if you want something you can say setup with fan curves to go slower/faster as heat rises. I mean if my fans died and I needed fans and had only a few bucks, id for sure buy them again =) ..
0
L

I use Core Temp because I think it was mentioned in an article here. When I'm playing a game like Apex Legends it stays around 70-75.So you're saying that these fans are okay?
1

non RGB fan "Cheap" only in price.. far from cheap though .. noctua are known to be the best fans available.. RBG fans (Id say better than Uphere brand )
1

just to keep air moving in a case, ya id say those fans are ok .. and I never used coretemp before, Try Ryzen master or HwInfo64 to see if you get same results, my CPU never peaks over 60°C, and I only use stock cooler with no tweaks to fan. my GPU is much warmer than CPU ever gets. so maybe its a false reading, Id try risen master and run cinabench and see temps there that, cuz 90s does seem hot
1
C

Agreed on software And Noctua fans.
Would help to know more about the case it is in and is the cpu fan actually increasing with those temps.

This is my case. I only realized after getting it that it doesn't have any front fans so will get a new one soon. Could you recommend another case in around the 100Euro range? Thank you
1
C

So are you saying you have only 1 fan as exhaust , the cpu cooler fan and No intake fans?
1

my case this is my case minus the fans , I never went with the fans as I upgraded mine.. but I love this case, lots of room, cable management is super easy.. and no restricted airflow
Reactions: Crosslhs82x2
1 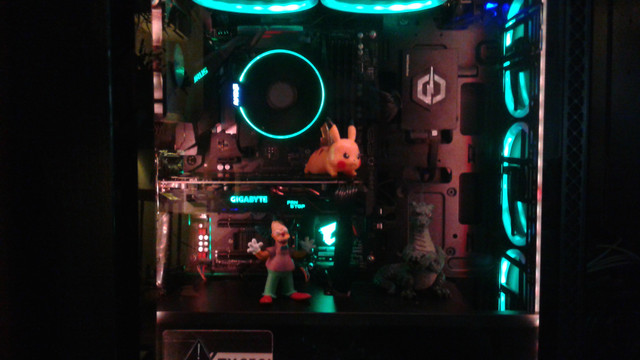 Ok, Ill be looking to get this one soon. Thank you
1

for the time being run the PC with side panel off.. Use Ryzen master for temp readings or HwInfo64 and see if that helps CPU temps running cinabench . im sure that case has room for intake fans (looks like it has intake slots on front sides..) so if its air flow issue leaving side off would solve that
1
C

Yes that should help, and give you time to decide for fans or a new case.
Is your gpu as close to the psu cover as in this picture from thermaltake of that case?


Ifso I think a new case as the gpu could use some air to.
Reactions: Gfost73
1

Oh wow looking at that case setup like that.. wow.. that poor GPU isn't going to get any air.. or very little and Id not be supprised if it doesn't create a heat zone underneath the GPU .. maybe new case will for sure be the way to go, and the one I linked, has RGB fans already so you'll save money that way as well =)
1

That's what's possible with the H17. It only comes with the rear, so buying a new case isn't going to solve any of that. Most new cases only come with 2-3 fans.

For lighting, use a argb/rgb strip, whatever fits your mobo. You'll get far better lighting than the 2x interior fans provide.
0
L

Ok, I'll be getting a new case soon. My GPU is that close to the shroud :/ I'm getting about ~~75 degrees while gaming, is that normal? Also, my CPU is running at about 4ghz and most of the websites say that the base clock speed is 3.6? I haven't done any overclocking or anything. Sorry for late reply I was sleeping.
0
L

This is what it shows me. I am getting those temps just watching YouTube and fixing a game on Origin.
0
L

Alright, it doesn't look like any fans could fit at the front and if they could there doesn't seem to be much space for them to get enough air?

by chance are you running windows power at high performance? its odd to see all cores maxed to 4.1ghz with no OC. maybe try using Ryzen Balanced power settings or windows balanced. as for GPU temp of 75 during games, seems about right, most GPU can get to mid 80s or 80 at least before throttling but i still think an easy test for you is to try with case side on, then off to see if it shows significant diffrances
Reactions: Crosslhs82x2
You must log in or register to reply here.
Share:
Facebook Twitter Reddit Tumblr WhatsApp Email Link