first time posting Build log - so be nice if I go off topic alot.

I know its old but its been good to me

Took me a good amount of time to amass the knowledge and idea of parts to get. Furthermore, I had the support of Tom's hardware community regarding what to look for and how to look for them.

So from "early planning" stages in late 2010 to "final mark up" of stuff to get in late 2011 (plus the arrival of the Aquacomputer rads worldwide) here's what I'll have to get my feet wet. 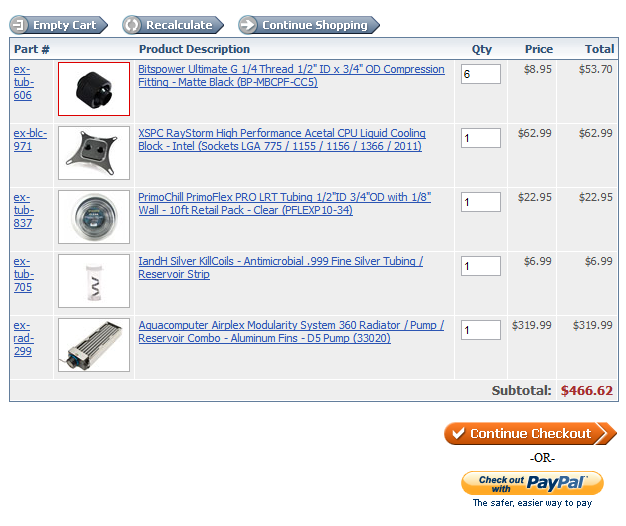 was the initial stuff to get until I blew my bank limit and went all out for most stuff.

Yeah i know, its overwhelmingly long... thas what I meant by going all out, and I also have the option of adding GPU blocks and more rad surface area 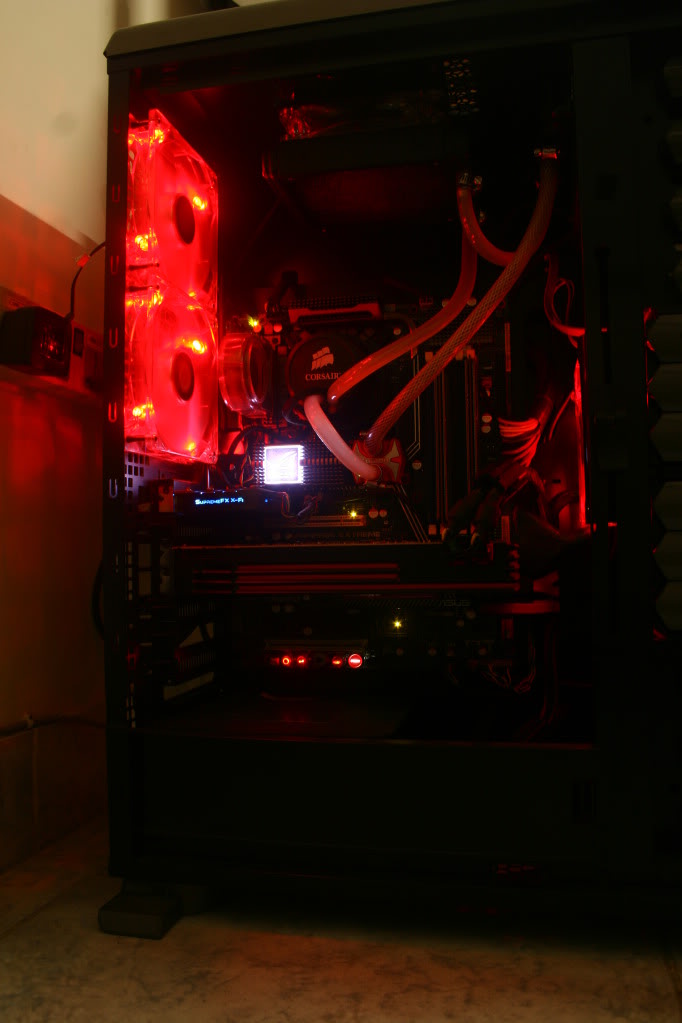 as of 3 days ago, I received the tubing, rad, radbox, barbs and kill coils.

the delivered stuff on my draughting table 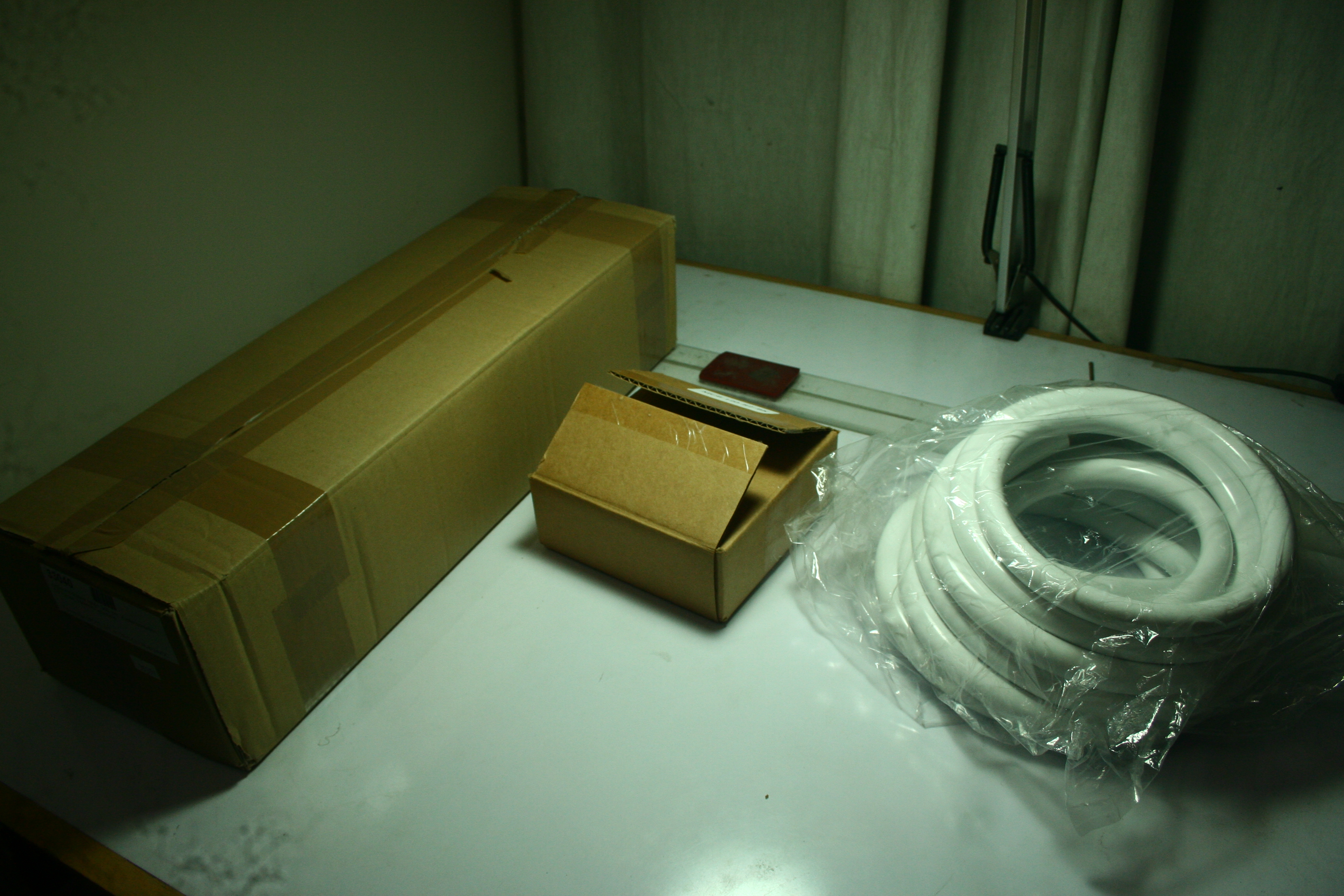 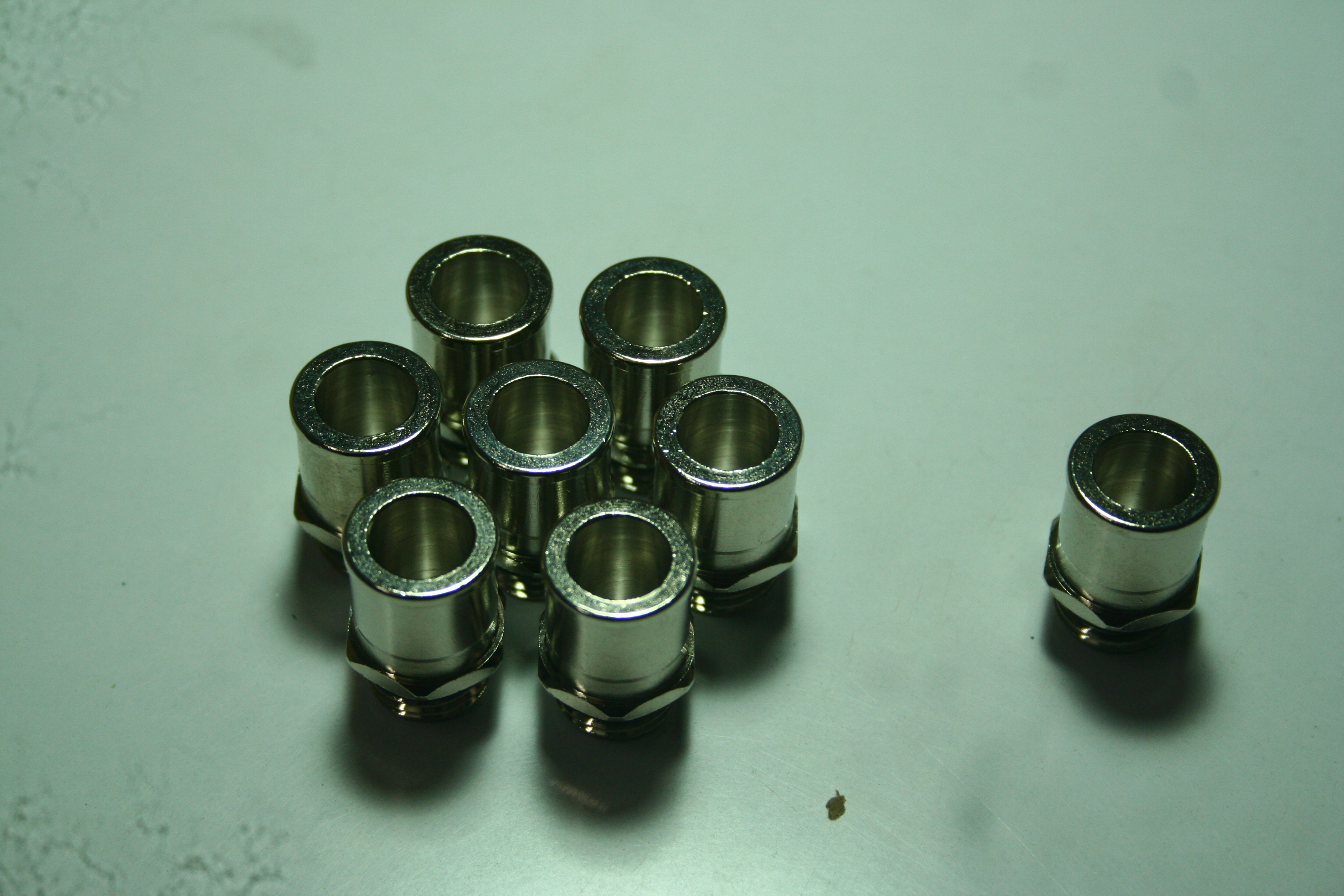 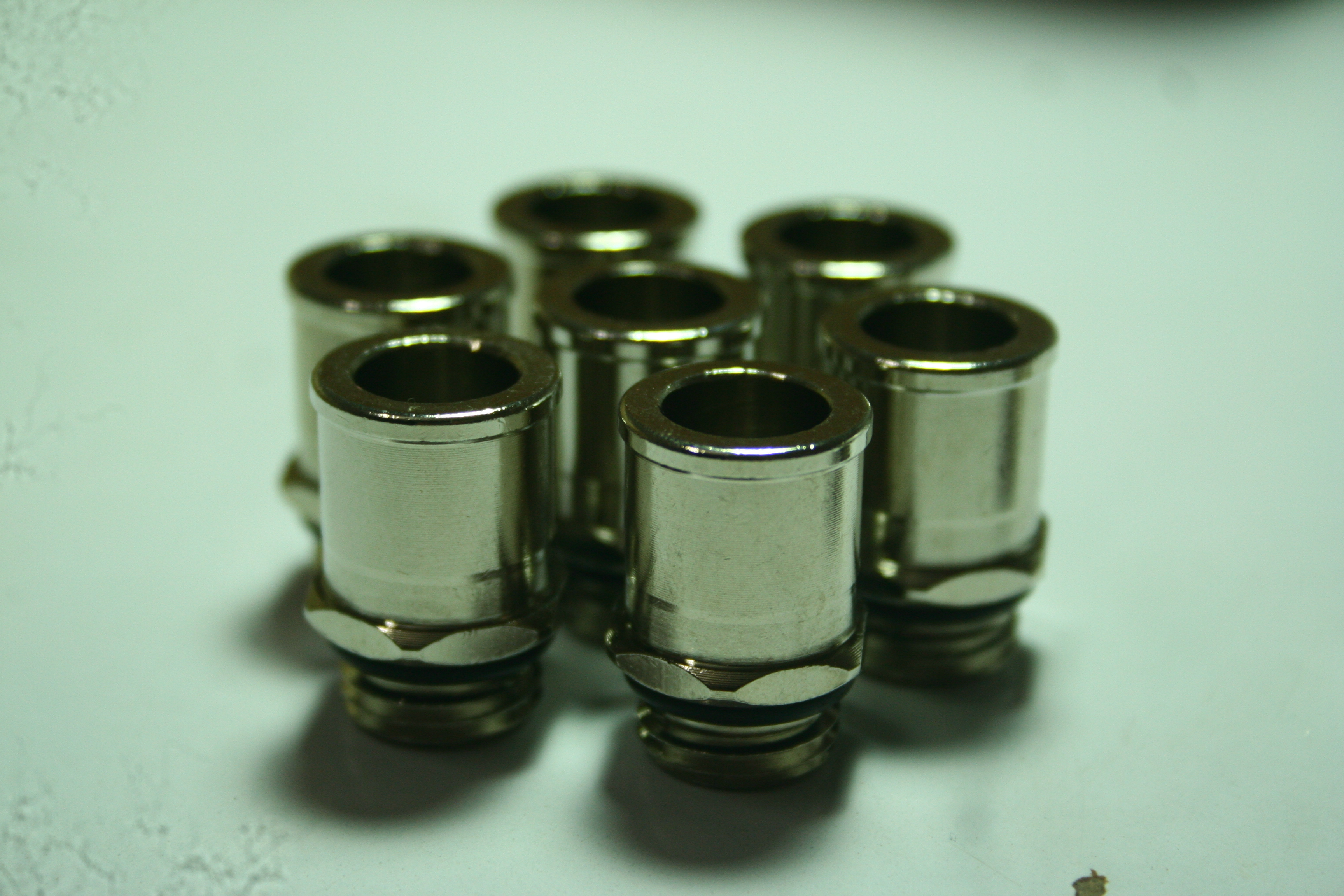 Note:
I didn't go with the Compresion fittings since most people complained of issues with the compression fitting hitting against the counter sunk level since the threading is sunken. so went with perfect seals.

I've already twisted them over a pencil - but didn't take a pic of it. 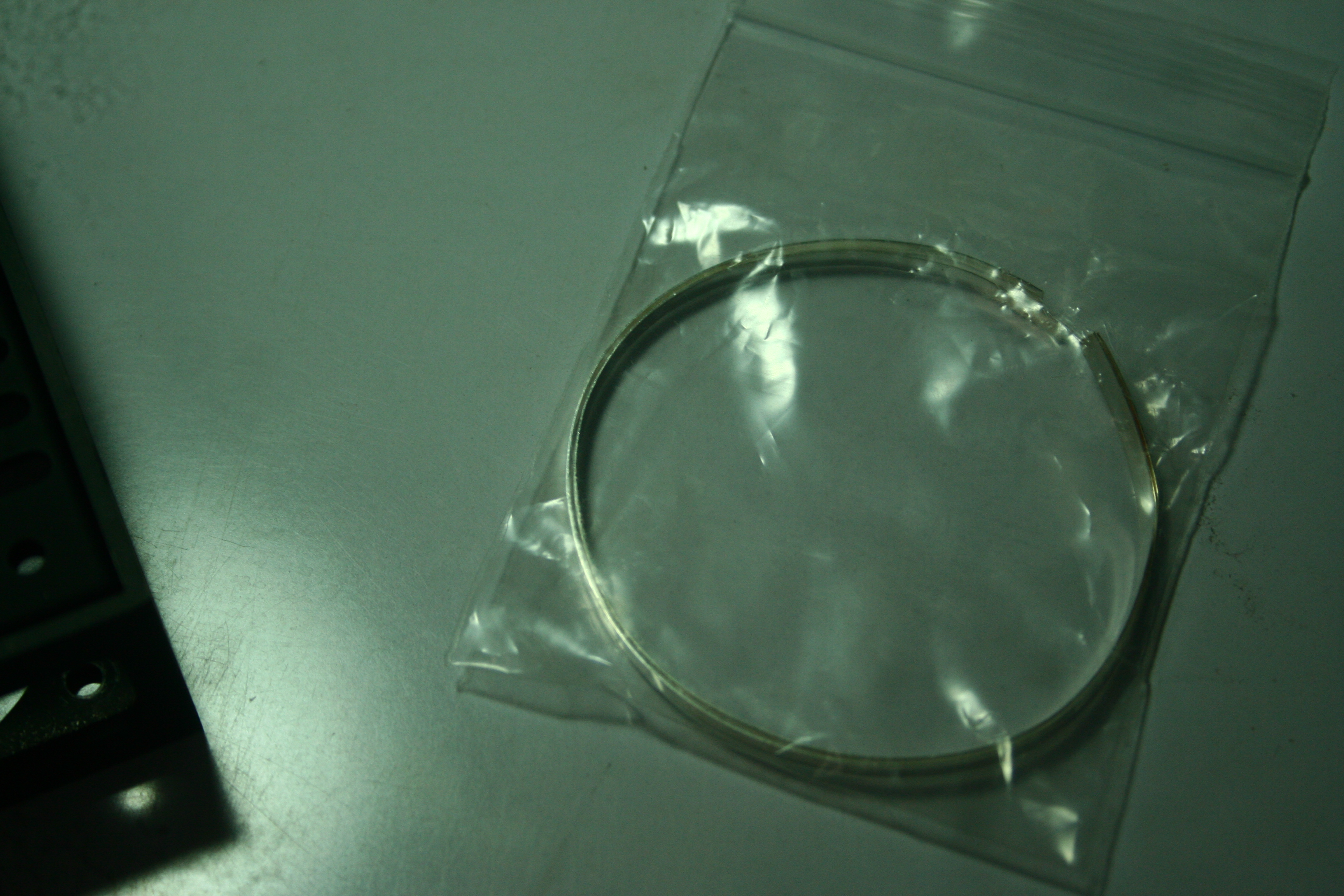 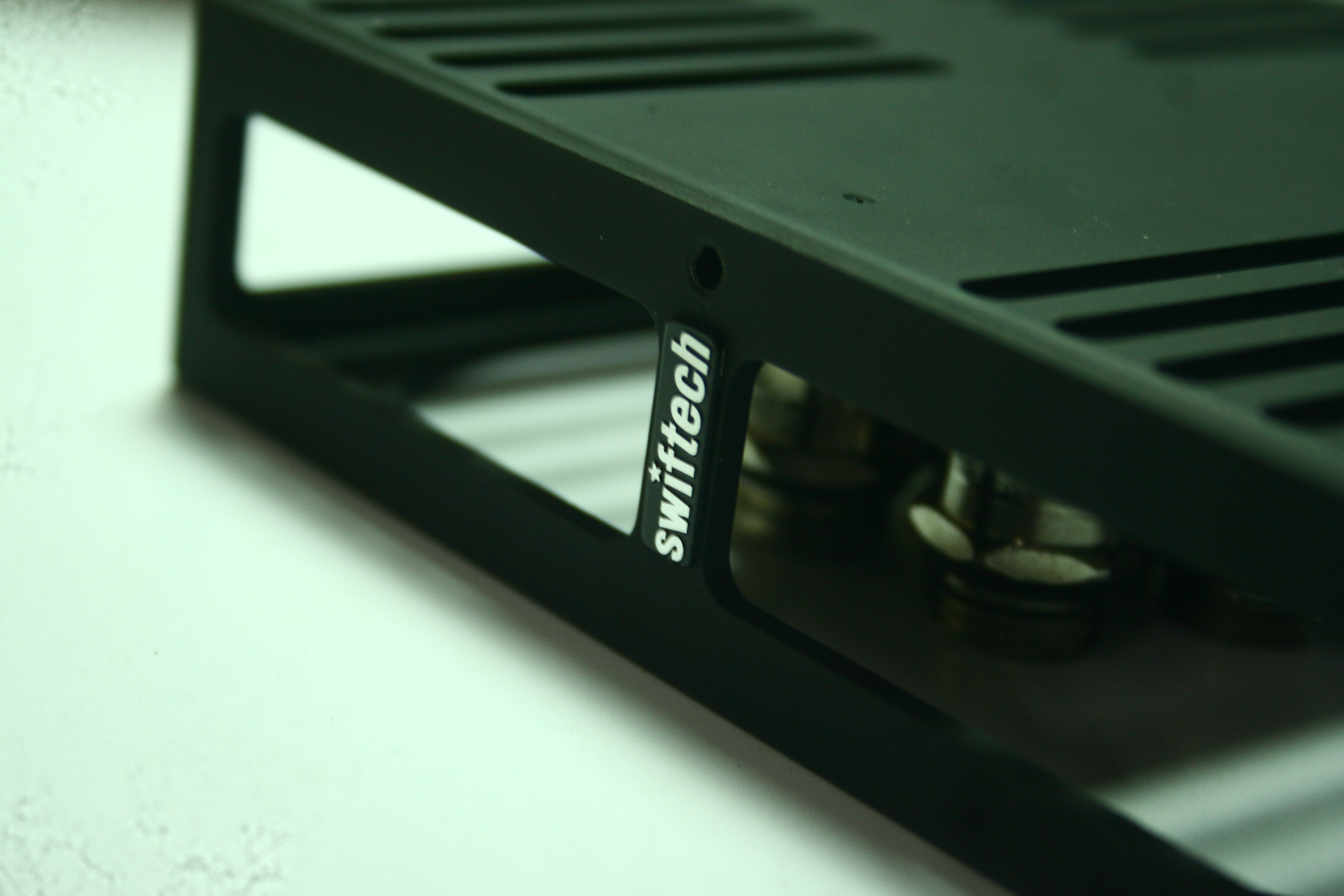 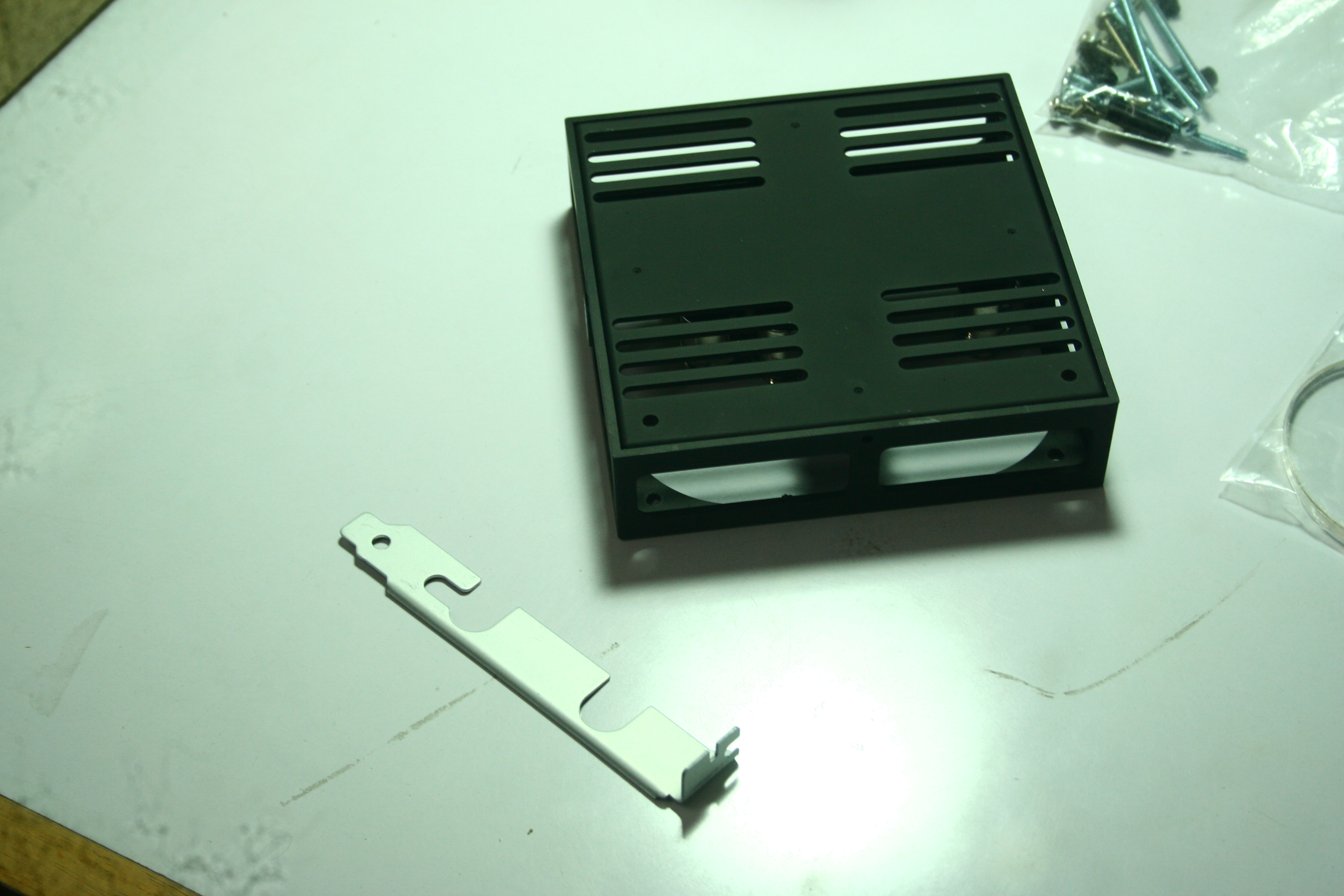 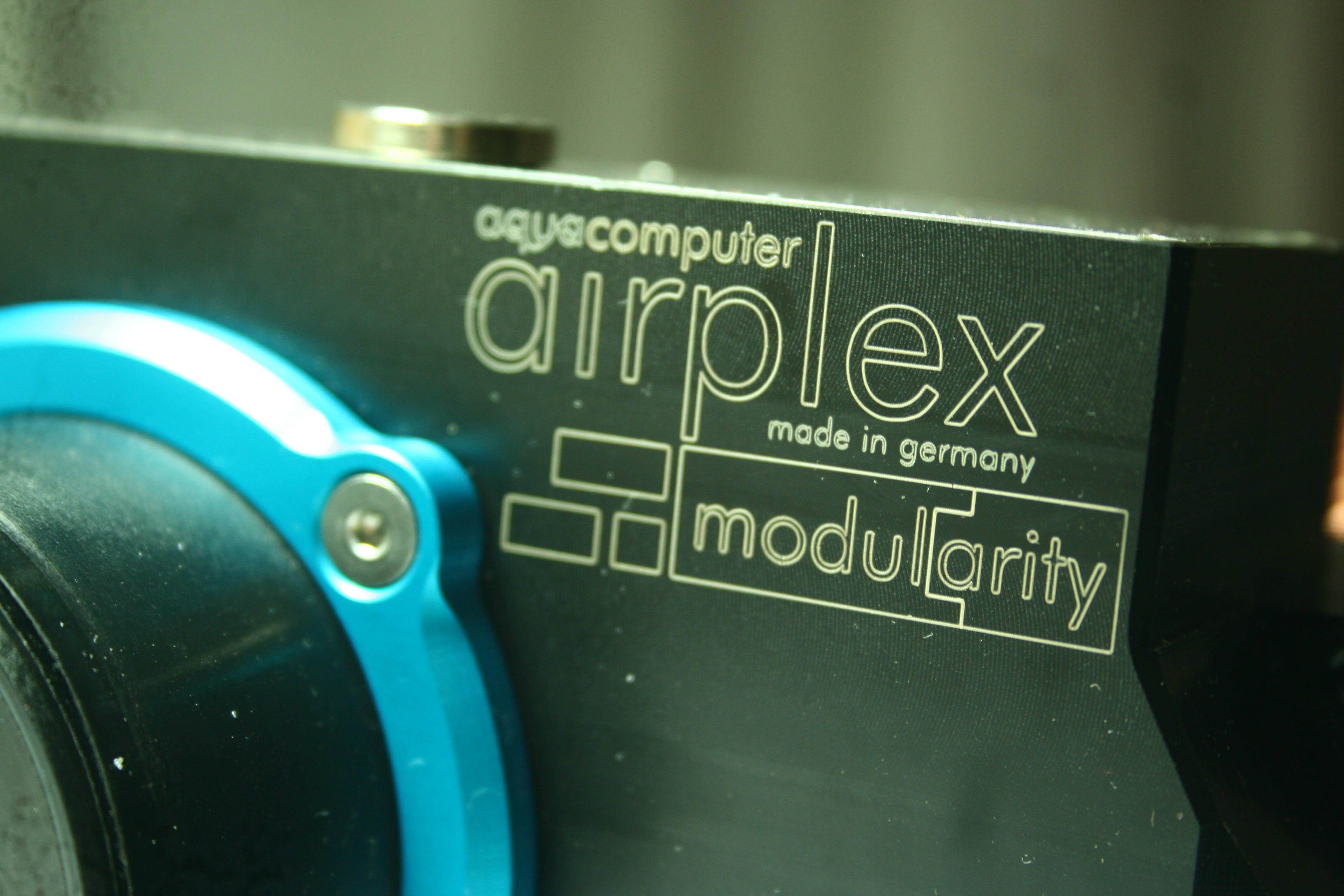 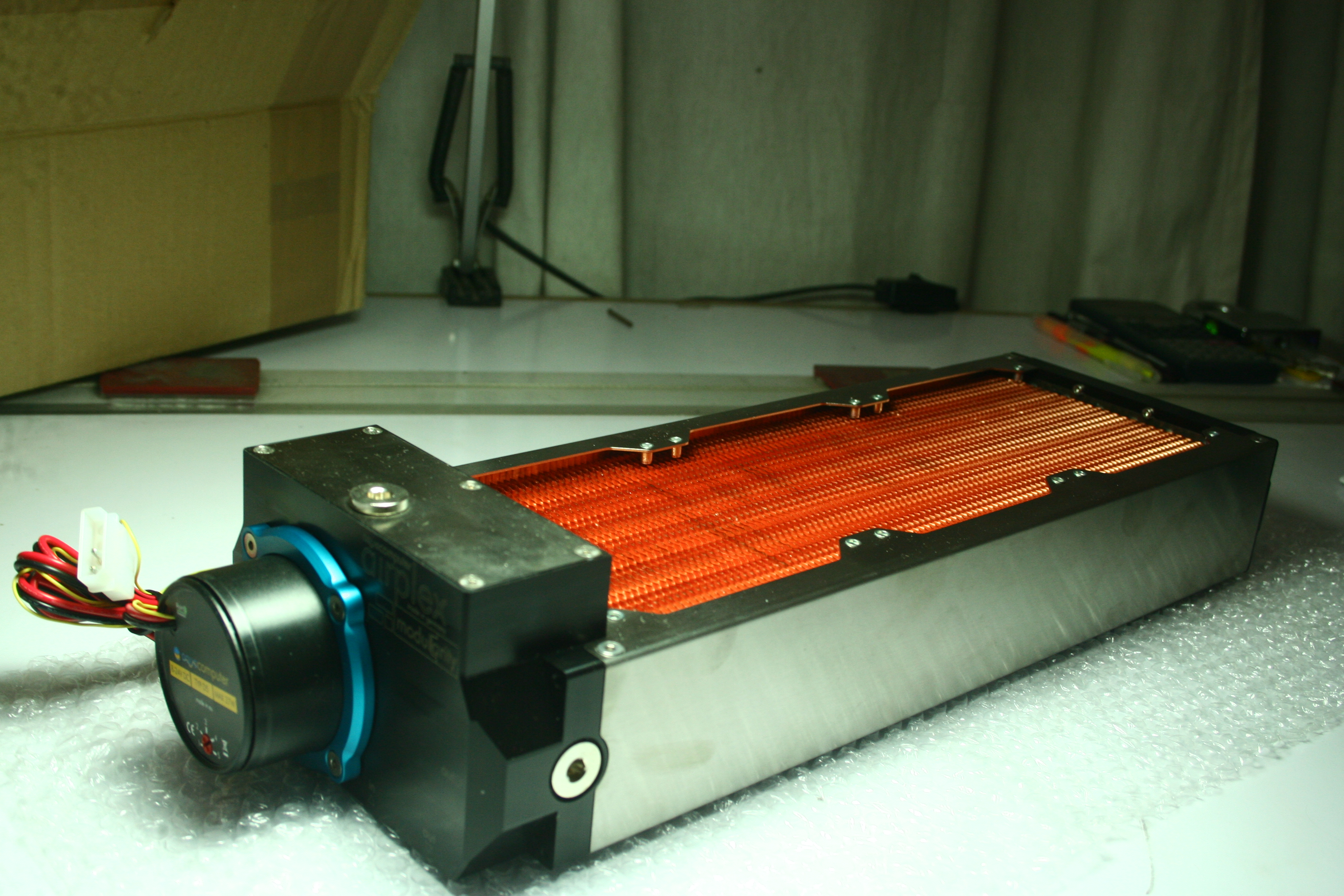 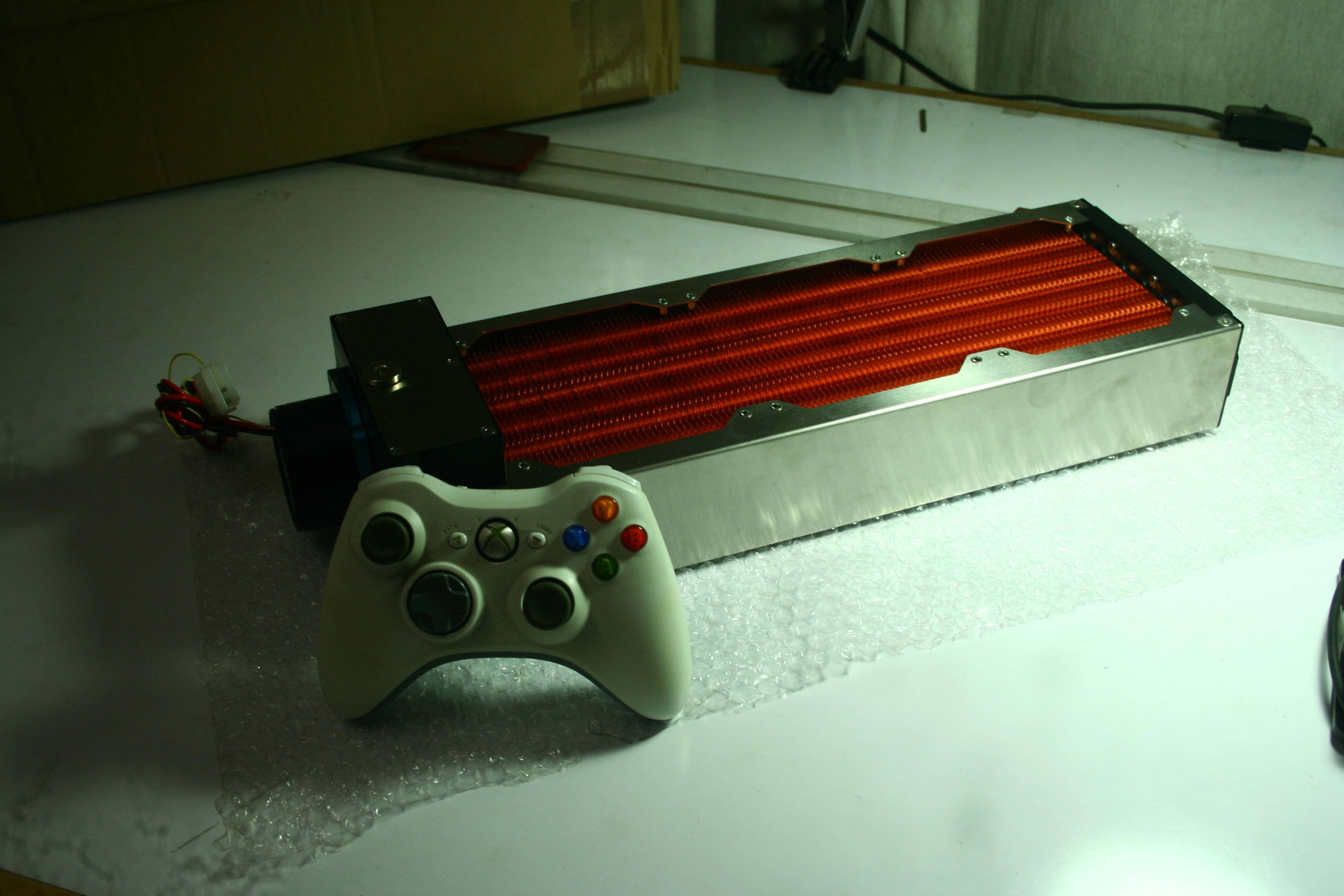 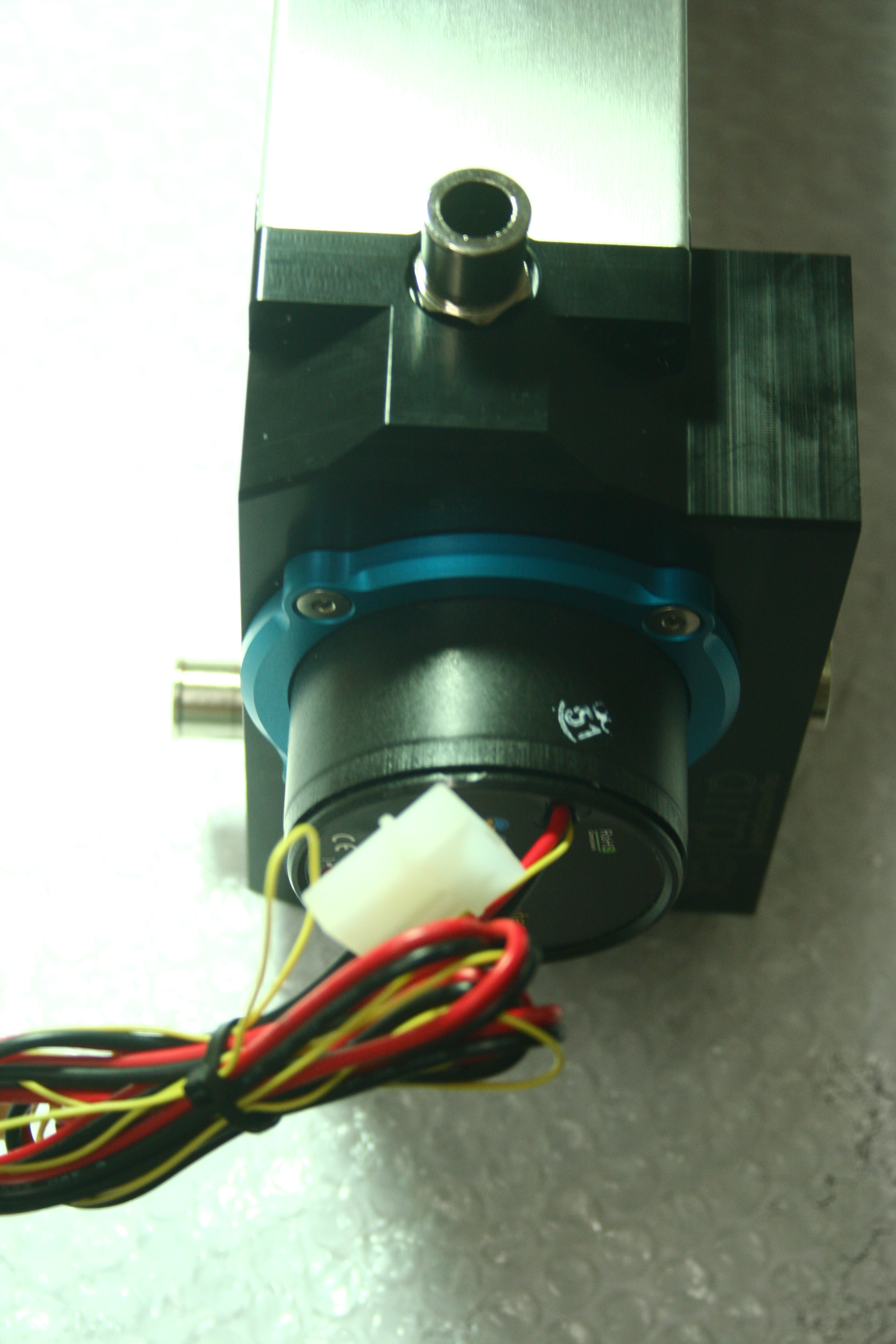 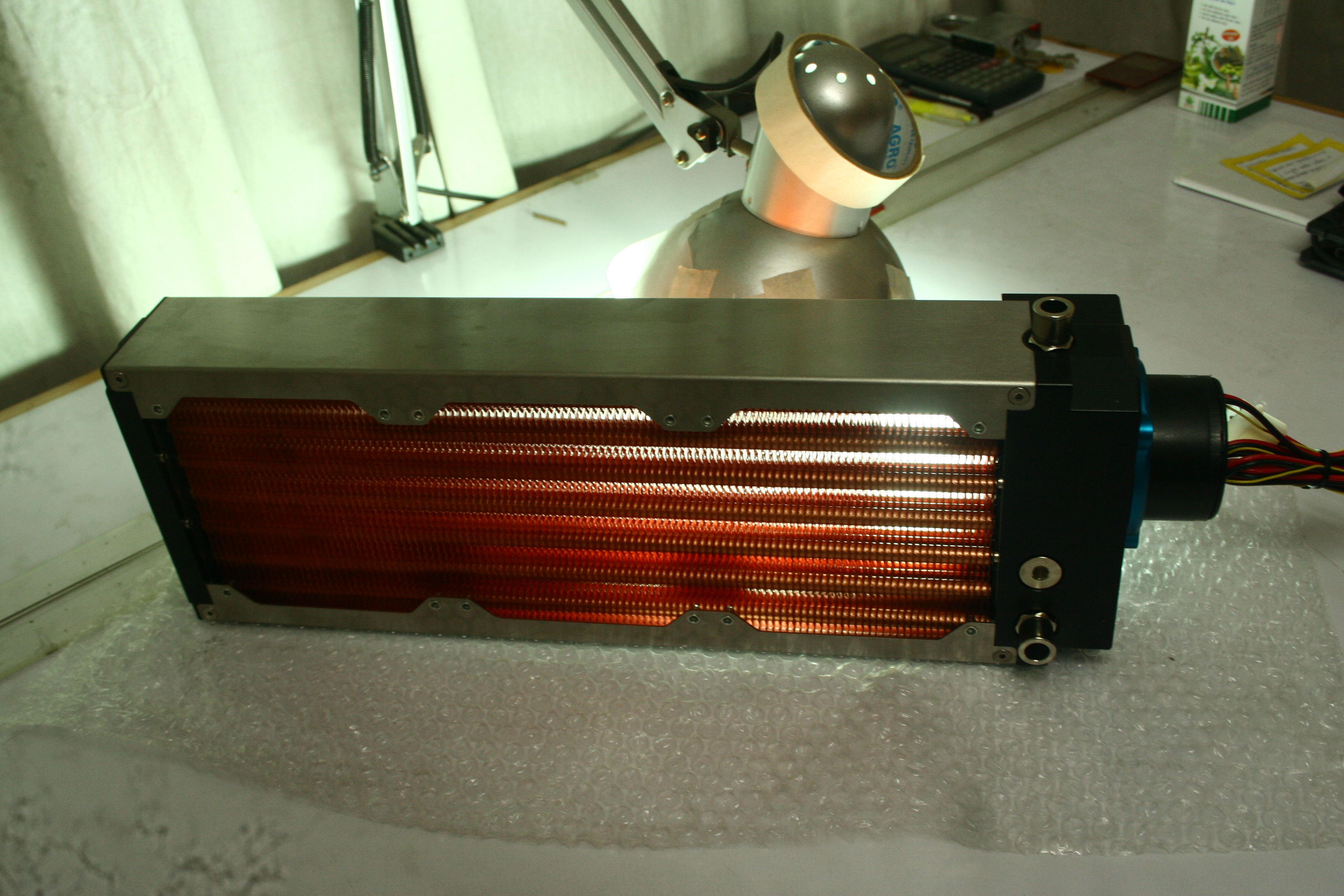 more pics will follow up once the rest of the stuff will make its way past customs.

P.S: sorry for the unsightly marks at the edge of the pics - my lense is aging, and its showing.
Last edited: Jan 12, 2021
Reactions: oakside
0

Damn that is a big rad. I'm curious to see how it does; they're quite pricey, but I doubt they'd be that expensive if they weren't worth the money.
0

eeeeeeeeeeeyaaaap, thas what i had in my mind for 6 months until i got a good amount of feedback from owners and reps @ aquacomputer.I posted a review of this rad a couple of weeks ago and its the best out there, but it IS bloody pricey.

more of the review of the rad:here

That heat dissipation is crazy. Overall the design looks quite nice, but more than one of these in a loop will either require separate loops or a second pump thank to their high restriction.

The all-copper look is great - I'm thinking about my next build being hard-piped with copper tubing...
0

dunno where the link is but yeah it will be amazing in heat dissipation for you.

but more than one of these in a loop will either require separate loops or a second pump thank to their high restriction
Click to expand...

yeah thas what i'm thinking about now, but lets see how the blocks fare with it now...and in the future when i add gpu blocks to it.
0

dunno where the link is but yeah it will be amazing in heat dissipation for you.
Click to expand...

I've heard of copper-piped builds here and there, and it sounds cool. I want my next big build to be hard-tubed, and copper sounded much *cooler* than standard acrylic
0

hard tubed - you mean that build that had hard tubing in the case , by murder mod? MDPC candidate?

I'm melting with the idea you gave me

but lets see how you do it ... its awesome though, copper hard tubing...

If you could do a solid-tubed build with copper, it would be pretty nice. I would personally do it in polished copper, but you could also go steampunk as well.
0

^ + 5 to steampunk'd idea.
Tomorrow morning I'll take pics of the measurements and the fan layout.
0

rubix_1011 :
If you could do a solid-tubed build with copper, it would be pretty nice. I would personally do it in polished copper, but you could also go steampunk as well.

If I do that, I wonder if I'd build the case using steel or something. I need a cool material that would be suitable...too bad carbon fiber would be an expensive and probably poor choice.
0

has a yellowish tint to it, would go nice with copper.
0

Fiberglass- wouldn't be too hard with a simple frame, some resin and fiberglass mat.
0

Lutfij :
what about titanium

has a yellowish tint to it, would go nice with copper.

That, and maybe some platinum trim

:lol: you're an engineer right? i'm an architect so i was groomed into looking for "reliable" parts - that don't come cheap.

Fiberglass- wouldn't be too hard with a simple frame, some resin and fiberglass mat.
Click to expand...

thas a better idea - i know its a good material to mod with, next best thing to carbon fibre.
0

here's a shot of part of my work environment. Rooms too small to take a panoramic shot, and i don't have a wide angle lens to take the pic. 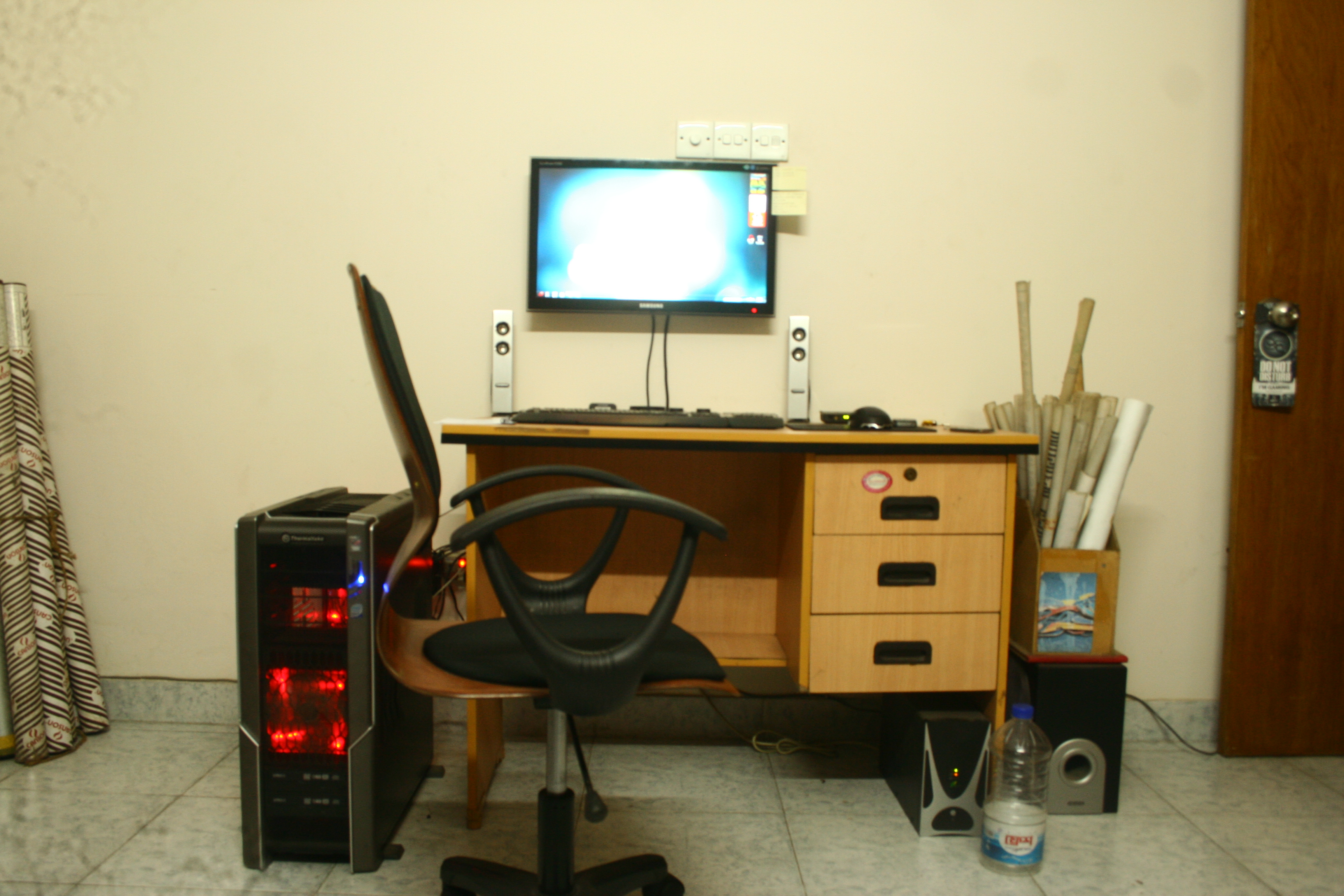 today i set about, trying to determine the length of screws i'll need to mount fans onto the rad unit and in the process find out how to mount the fans.

for reference's sake, i had a Tt fan lying around, that'd be good for this test run and a steel edge scale. 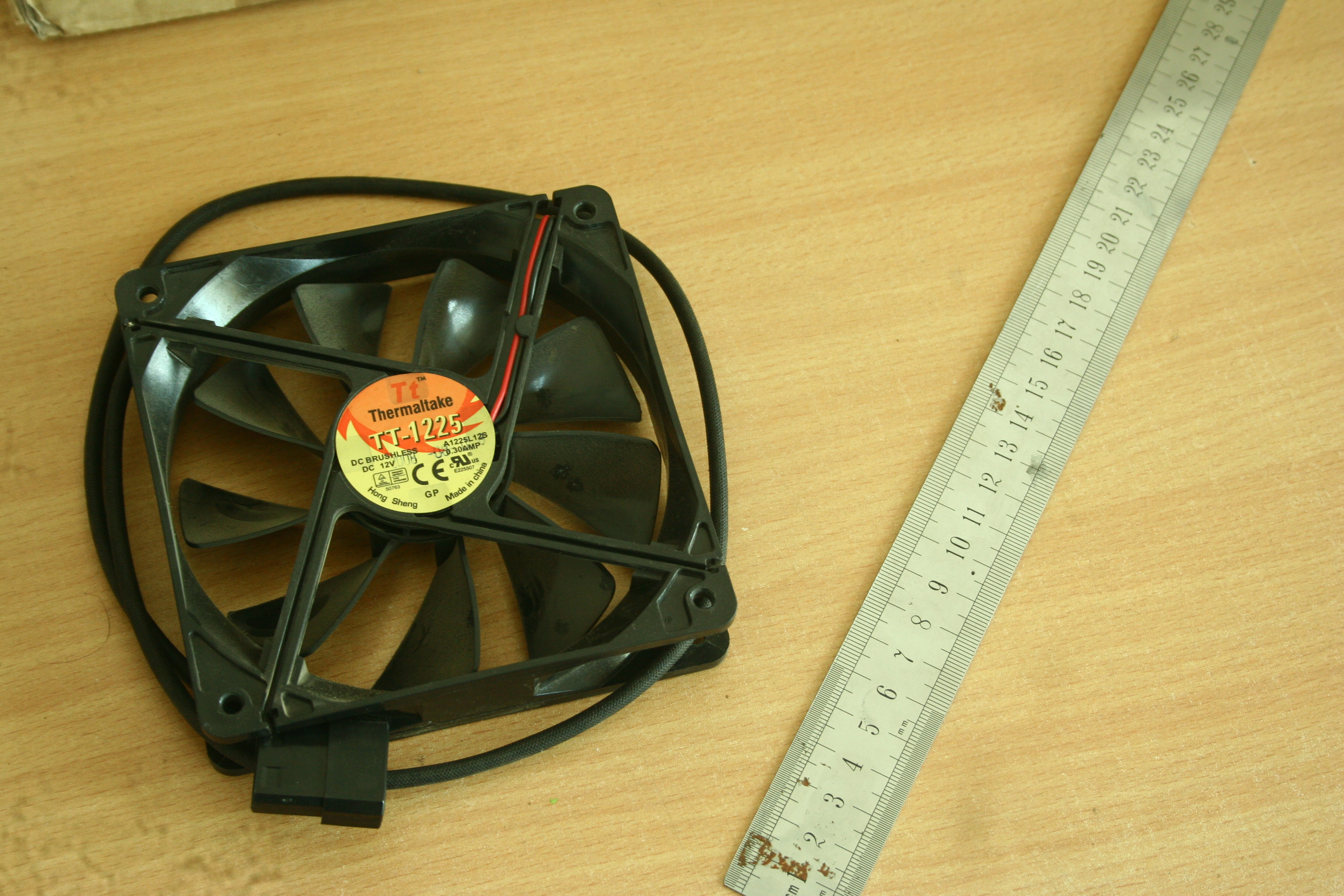 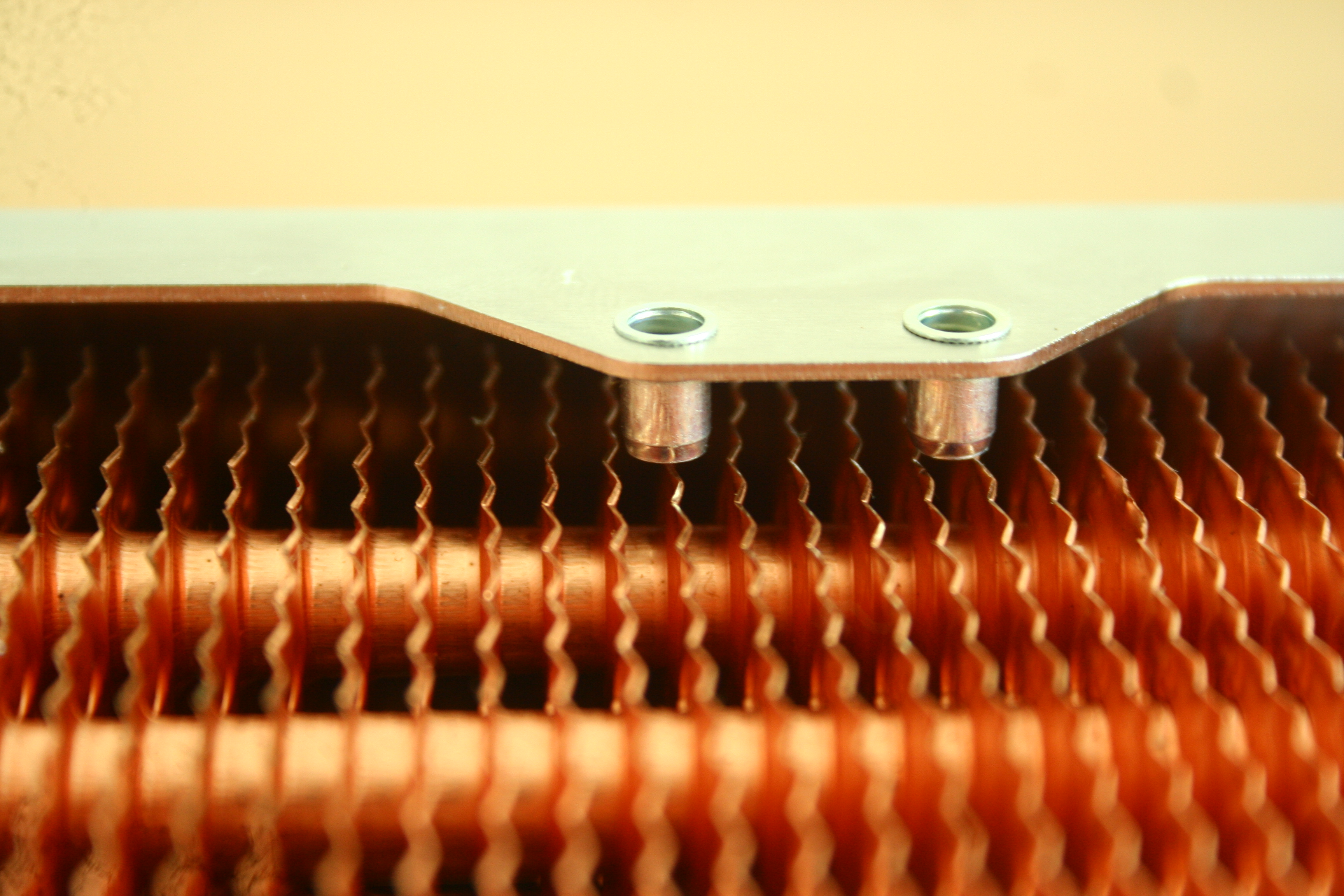 and thas how much i have between the fins 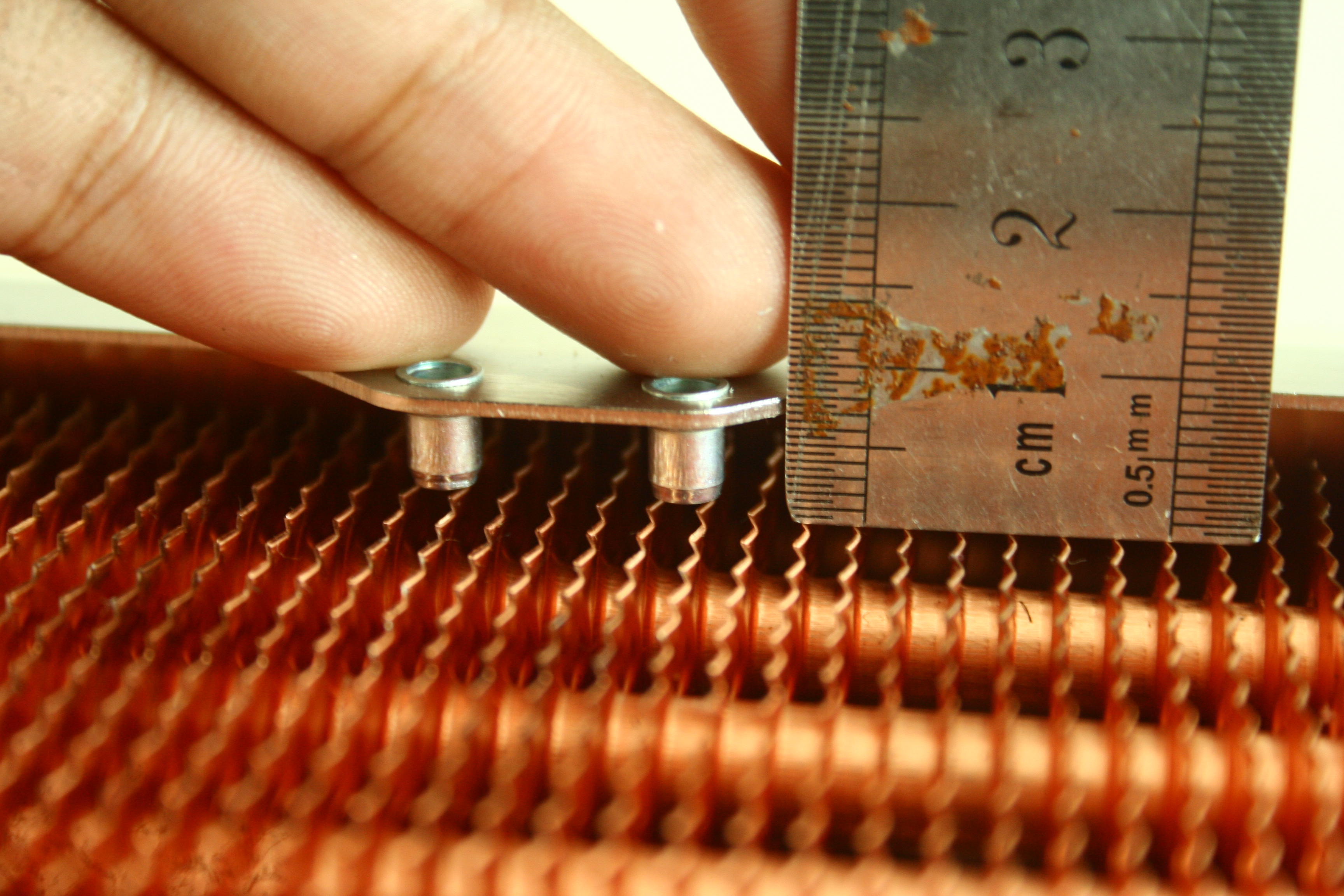 anyone else who's looking at this rad, please remember that the threading is M3 and not M3.5 like most rad threads. 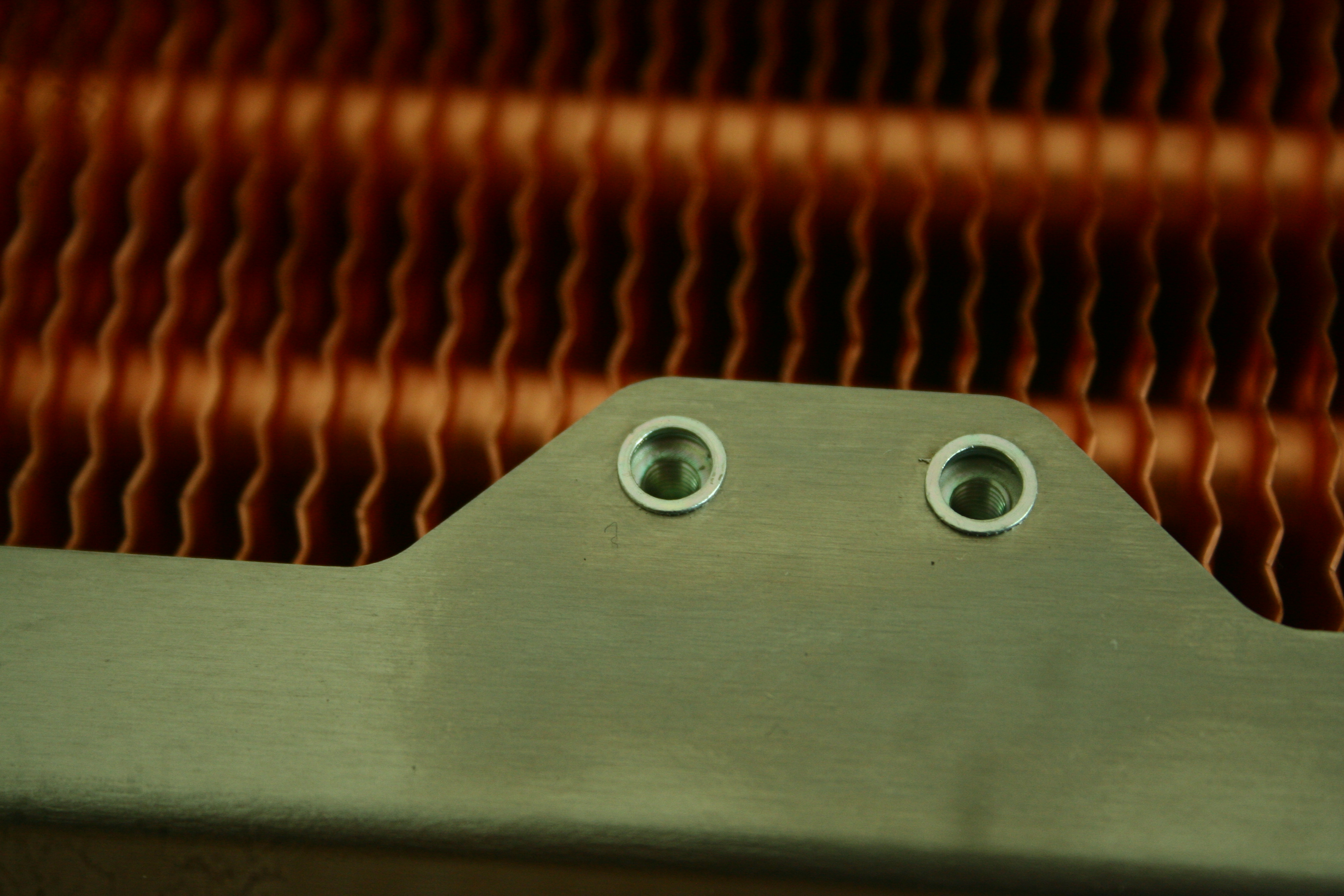 with the fan on;
this is what you can expect to see when I'll have the AP-15's mounted. 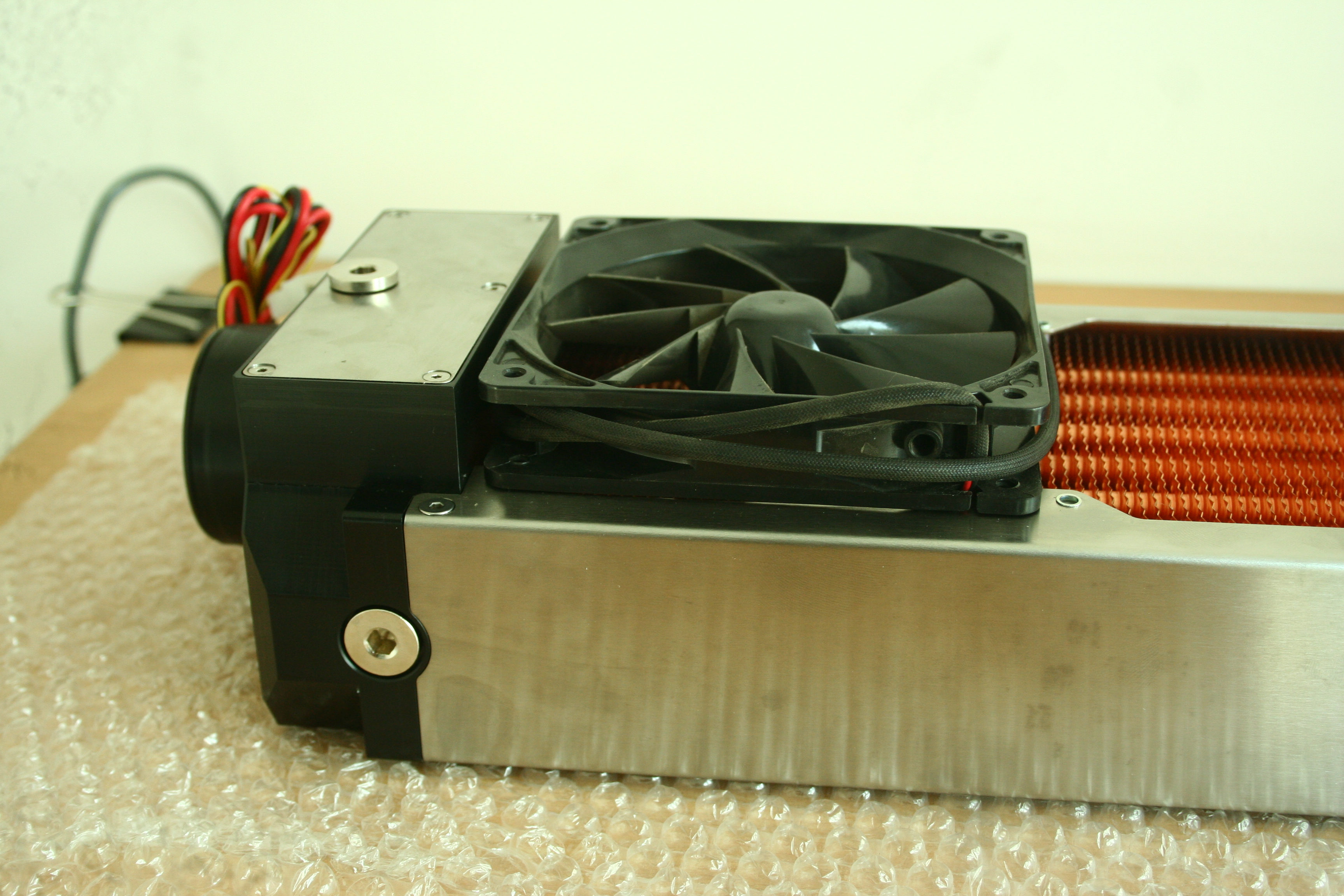 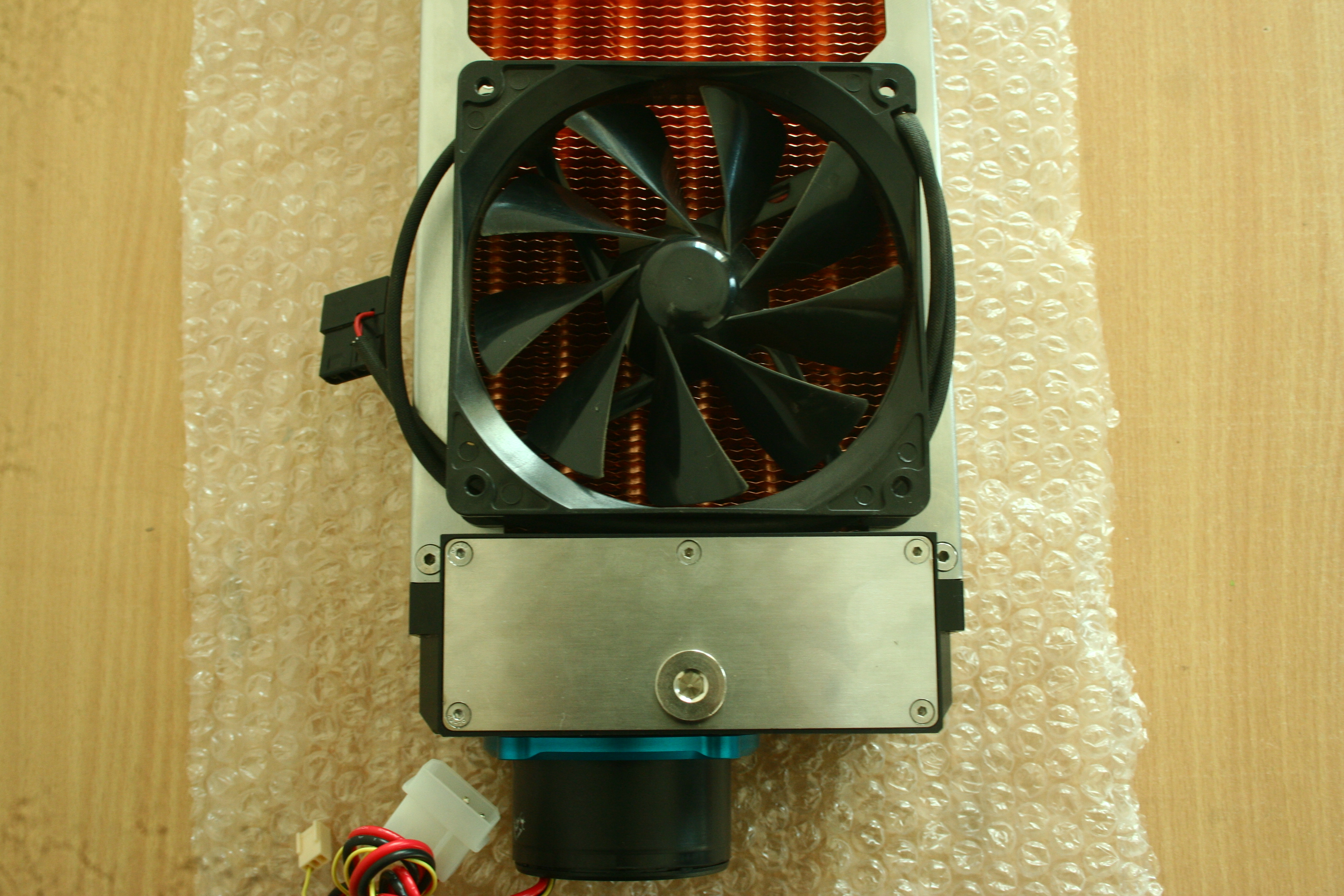 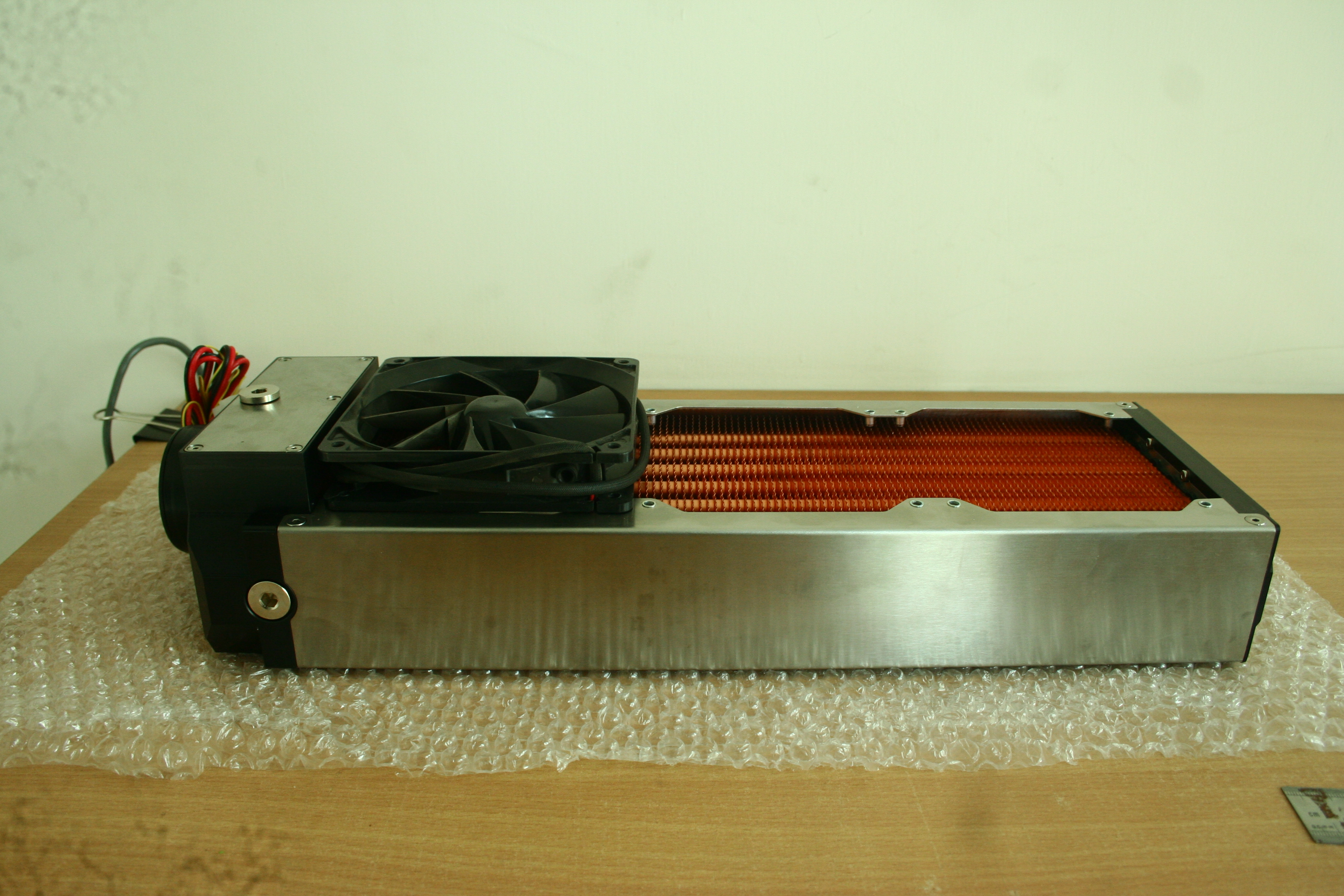 design consideration - lemme tell you, they did their homework. 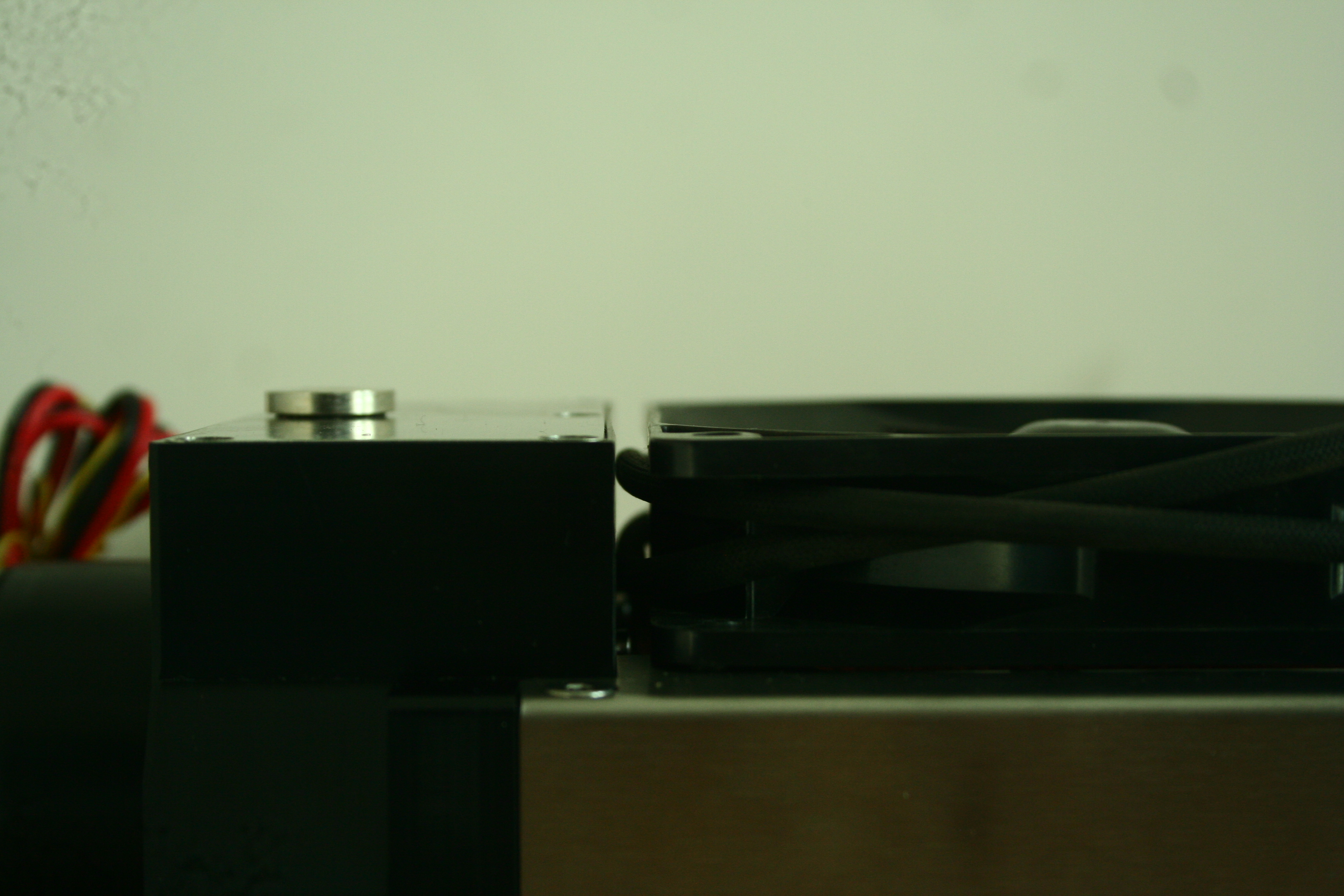 and the little itty-bitty details. 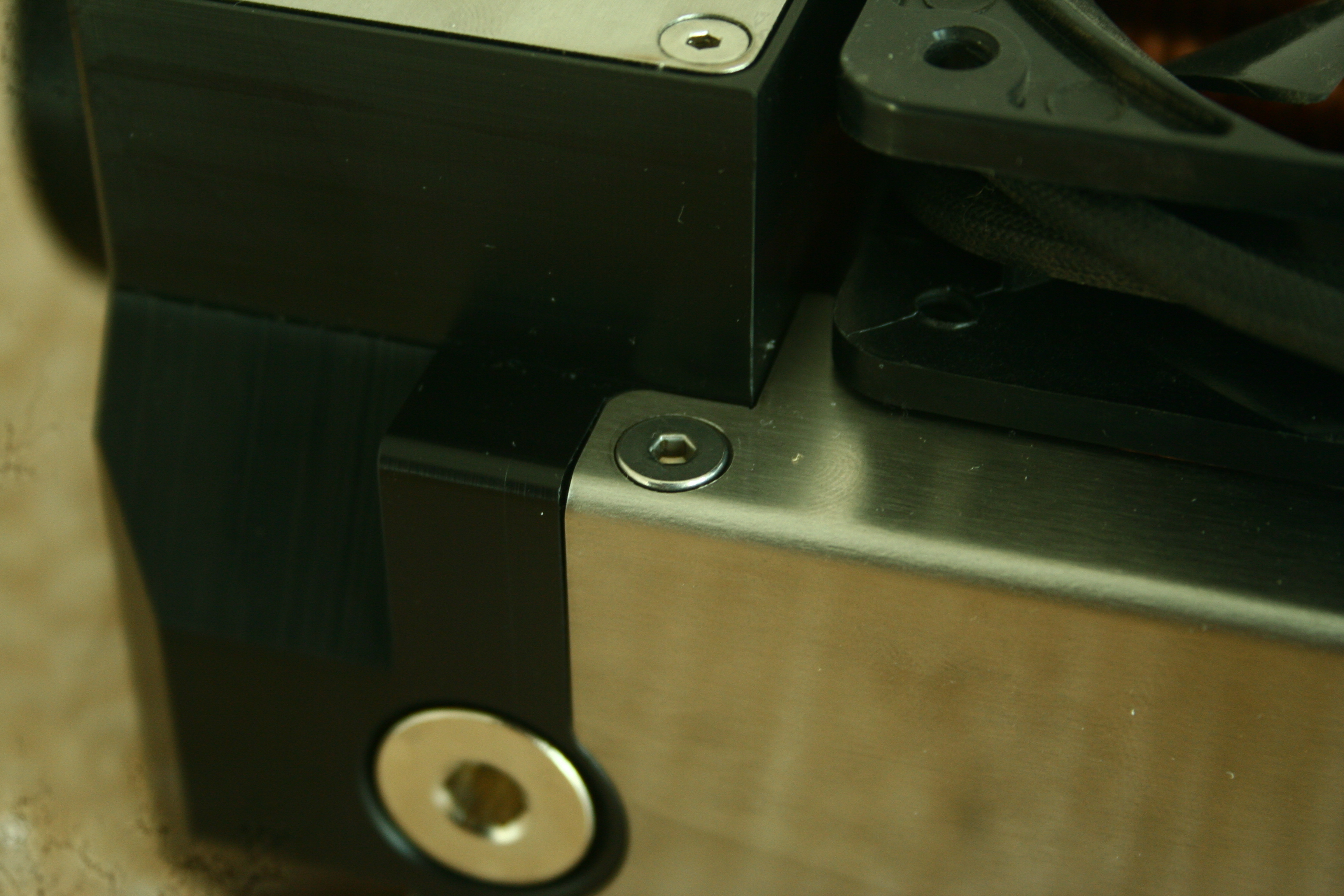 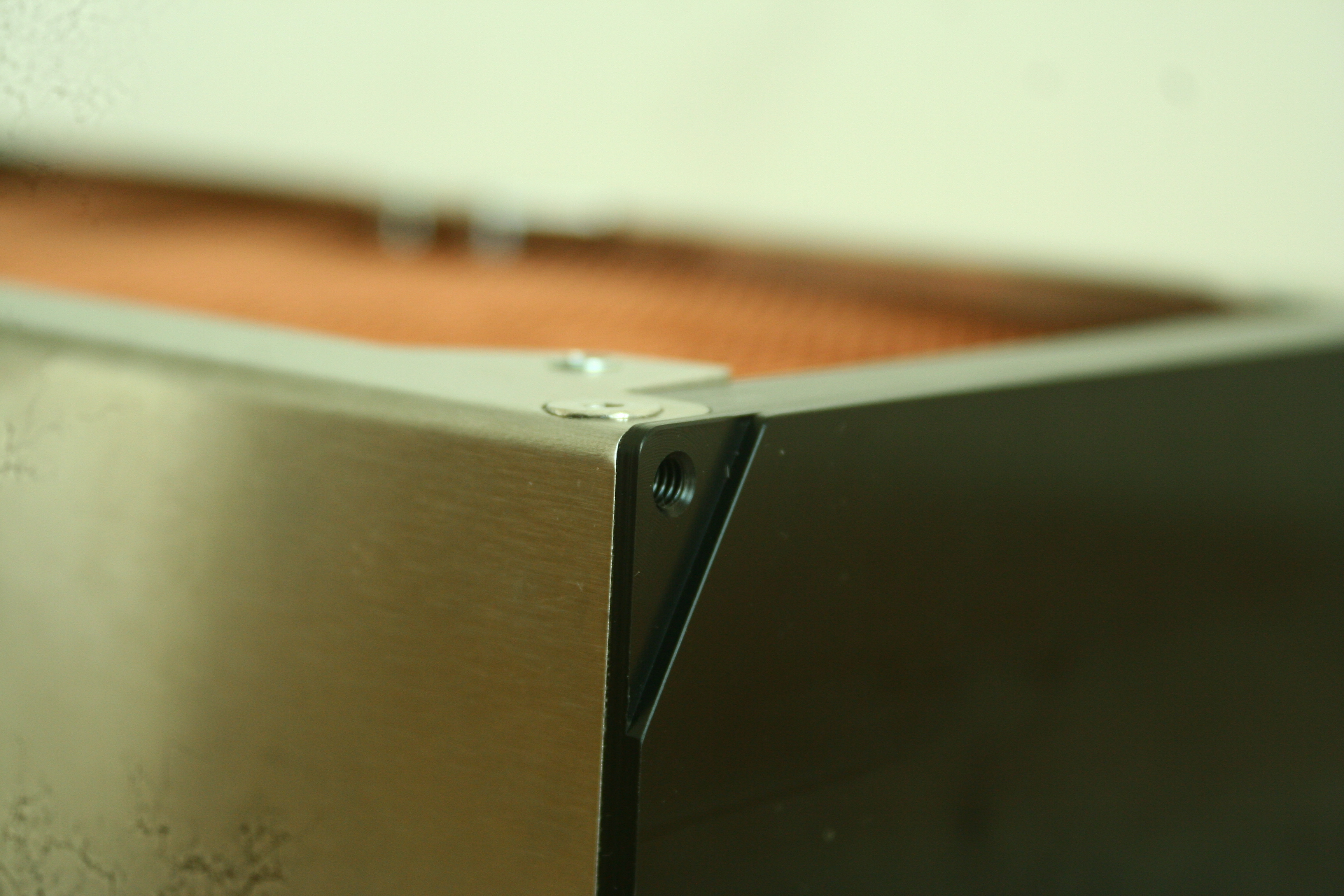 since i'll be mounting the rad vertical with the pump impeller facing up, i'll need a res for the AMS - which is also en route. 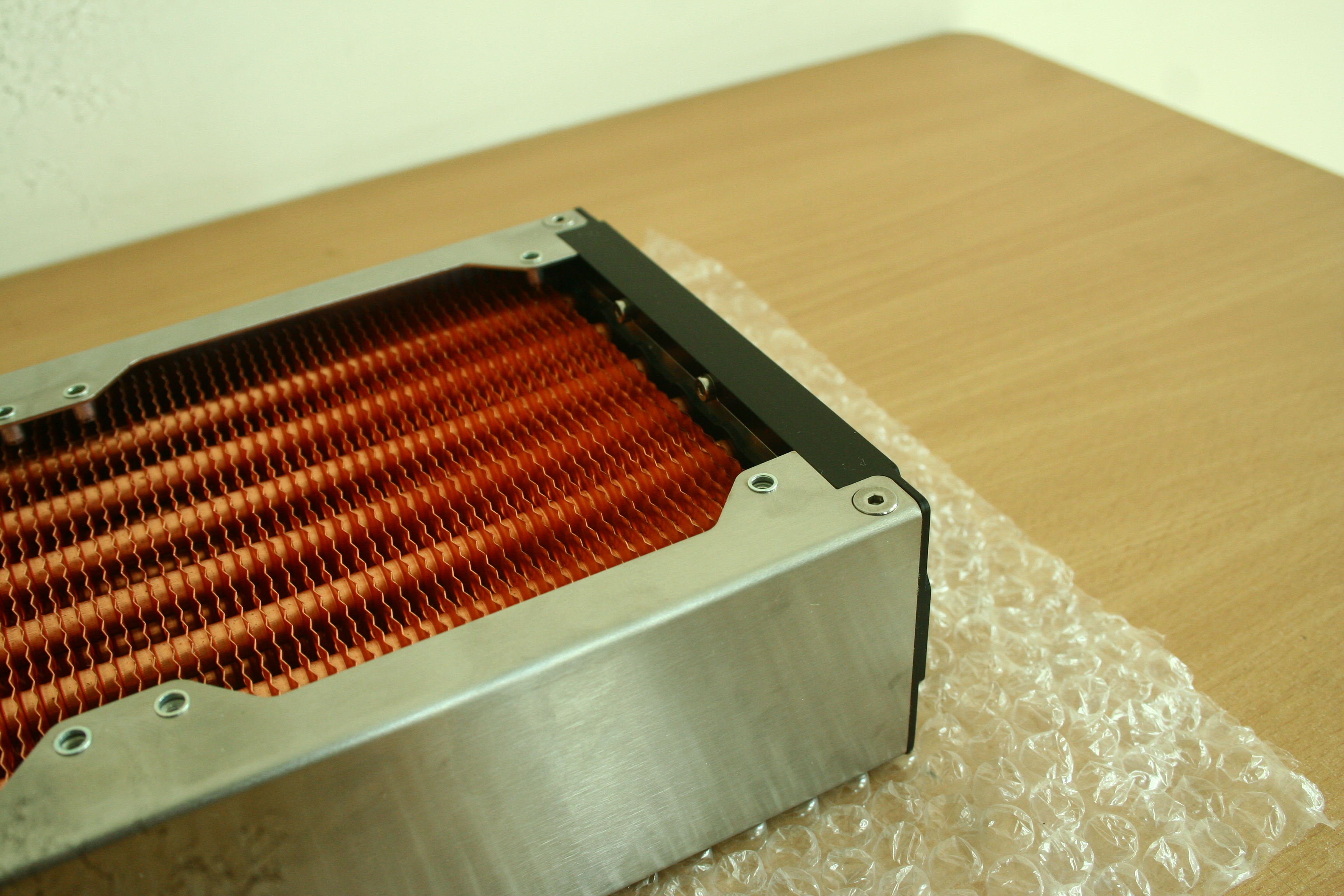 back on track with the dimension:

since Friday, I've been digging on most sites and googling on what sort of screws i could use to compliment the unit, the latter would be nullified as i want the screws to go through the open end of the fan and would eventually be out of sight, but if the observer noticed well enough, they can take note of the "attention to detail" 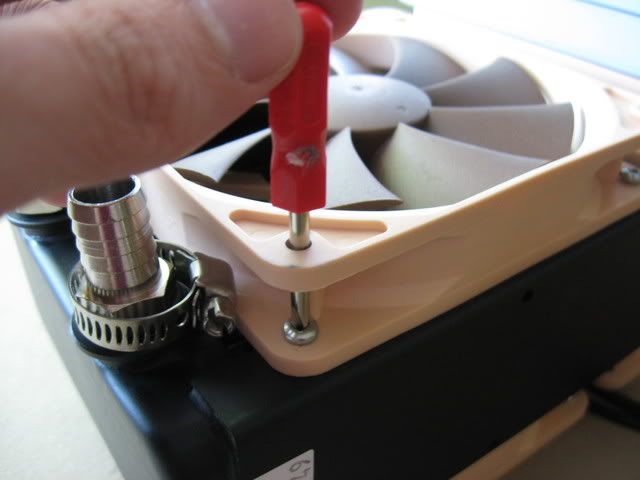 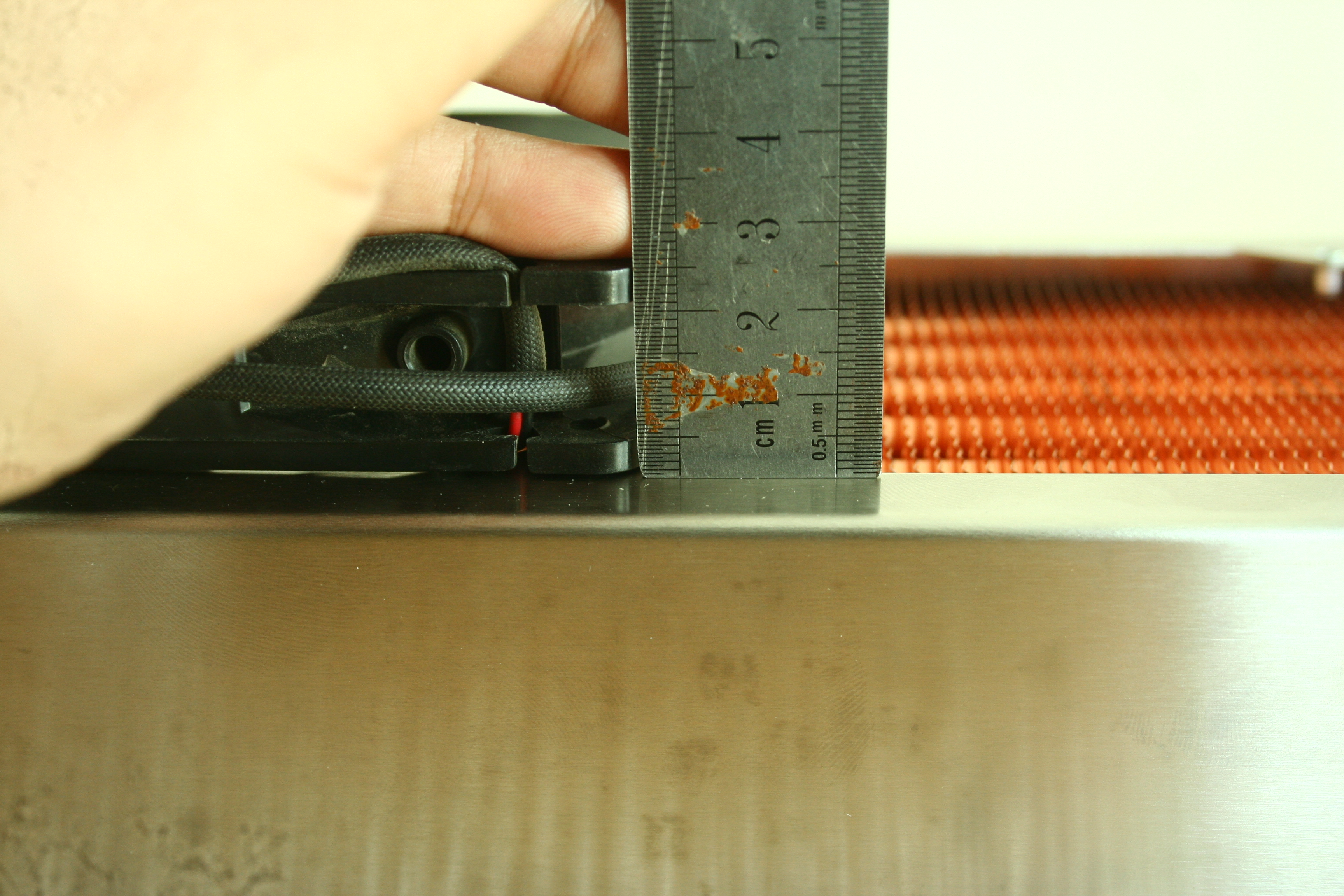 and the grand total would be: 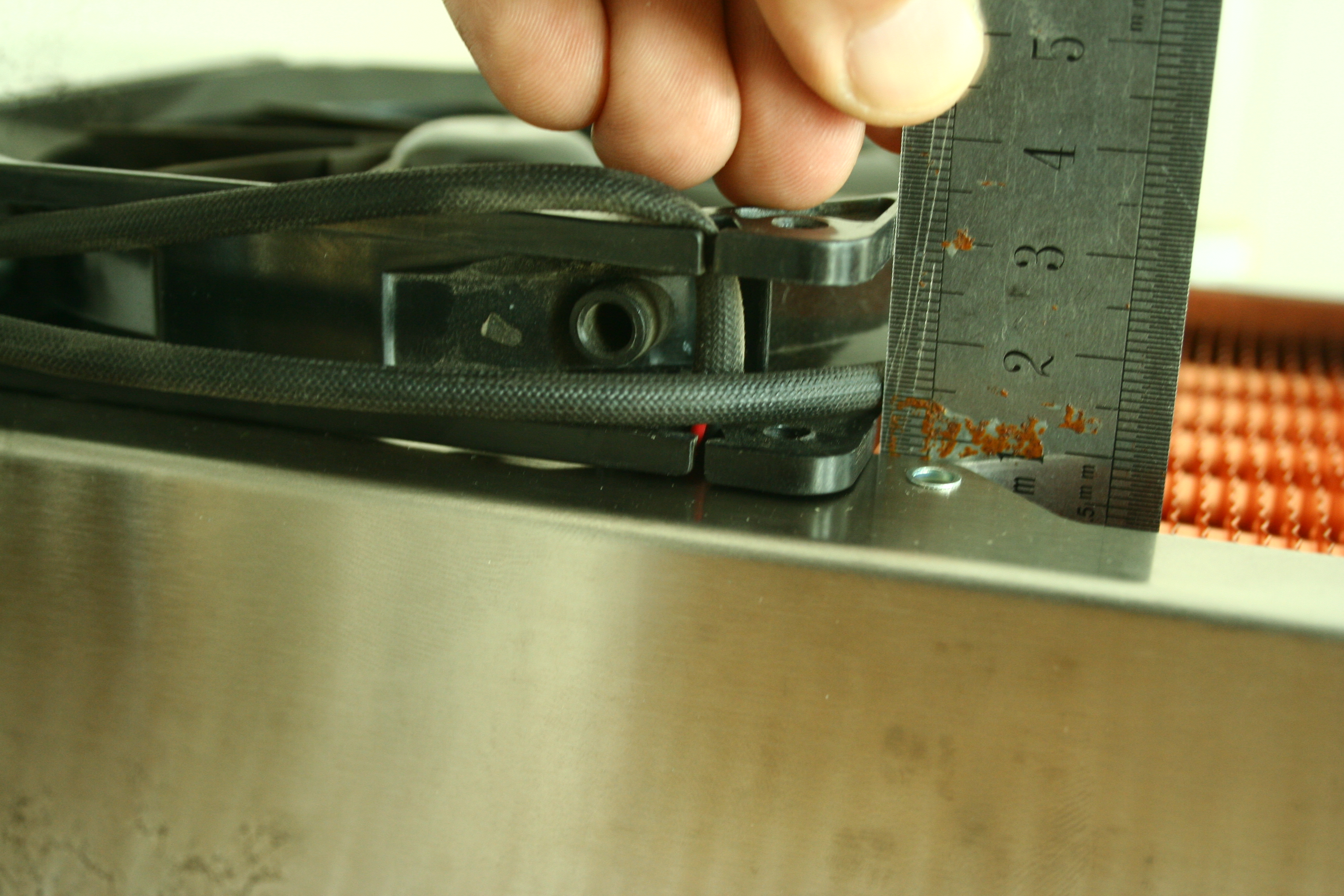 now that i have the length, i thought of going with these

For the readers info. (FTRI) - you might wanna check out homdepot or a local hardware store for the screws instead of getting them at e-tailers like frozencpu. Much cheaper.

** apologies to Rubix mate - i mentioned, what i thought to be a beveled edge to prevent any screw from "eating" into the rad...i was wrong.

no, it will not prevent the screw from going into the radiator. I know it looks a bit like it would do, but the screw will easily go through at the end.

Edit: and thas not rust on the steel ruler, its red oxide stuck in dry aica... result of making models late at night years ago.

** apologies to Rubix mate - i mentioned, what i thought to be a beveled edge to prevent any screw from "eating" into the rad...i was wrong.
Click to expand...

Always a very strong recommendation to test all your screws first, just in case.

yeah noted!
good thing all the M3 screws i had were only 6mm long.

but what do you think about the screw i posted? would go flush with the rad/open fan frame
0

anyone else who's looking at this rad, please remember that the threading is M3 and not M3.5 like most rad threads.
Click to expand...

If you remember the swiftech and the H50 rad mod, i initially had the Swiftech MCR 120 QP res only hooked up. I received screws that also went with the H50 rad screw holes. Recently, cos of threading and dimension confusion - i found out on Swiftech's site that the screws with the rad box won't work either.

and on further pondering, the .5 is the difference between the threading depth:http://en.wikipedia.org/wiki/Computer_case_screws

6-32 screws will strip the threads of M3-threaded holes. When the M3 hole is drilled into sheet metal (as on floppy and optical disc drives), a 6-32 screw that damages the threading will typically stay in the hole and can be removed fairly easily. When the M3 threading is into solid metal (such as a motherboard standoff), a 6-32 screw will get stuck before it can be screwed in all the way.
Click to expand...

Yeah, they aren't exact and some radiators need one or the other. However, they are both very similar in thread size and dimension so it's very easy to confuse which is which.
0

^ yeah well, google and some thinking removed most of the confusion. While i'm at it, was also thinking of going with these for the mobo: http://www.fastener-express.com/m3-x-5-x-6mm-socket-head-cap-screw-black-anodized-100.aspx

i'm talking it over with the guys there if they can give me 100 pieces of the same screw but at 10mm length.

reason being - going with this screw:

* will get these then:
http://www.fastener-express.com/m3-x-5-x-6mm-socket-head-cap-screw-black-anodized-100.aspx - for motherboard and future builds

http://www.fastener-express.com/m3-x-5-x-12mm-socket-head-cap-screw-black-anodized-100.aspx - for rad. will need to grind the extra 2mm's off but i dunno how.