Question M.2 ssd: Windows 10 boot device no longer found after crash. Traces of liquid found on the drives?? After drying, drives show up but are read only.

tl;dr: Boot device not found after crash. M.2 drives had some weird liquid on them like they were sweating(??) but show up in system after drying. Files can be read but not written on either of my two m.2's. Can't run bootrec /fixboot or chkdsk because of this.
Is this read only mode an m.2 thing? Possible liquid damage or just superficial/harmless condensed water unrelated to the issue? Wat do?

While I was sleeping I suddenly woke up because the rain sound from my PC stopped 😅
I expected it to be just the internet cutting out, but when turning on the screen I was greeted with :

Since rebooting didn't work, I inspected the drives and found traces of some weird liquid on them:
(image album link so it doesn't clutter the post)

On the pictures it may look a bit wetter than it actually was, but with micro electronics, I assume even a small amount can be bad...

At first I thought well that's it, the drive is gone (or even both) but after drying them with a hair drier and putting them back in, while still not booting, they showed up in the file explorer of the recovery CMD from a Win10 USB-Stick!

So fortunately the drives at least aren't completely messed up and I can even read files! (Used regedit to access file browser): 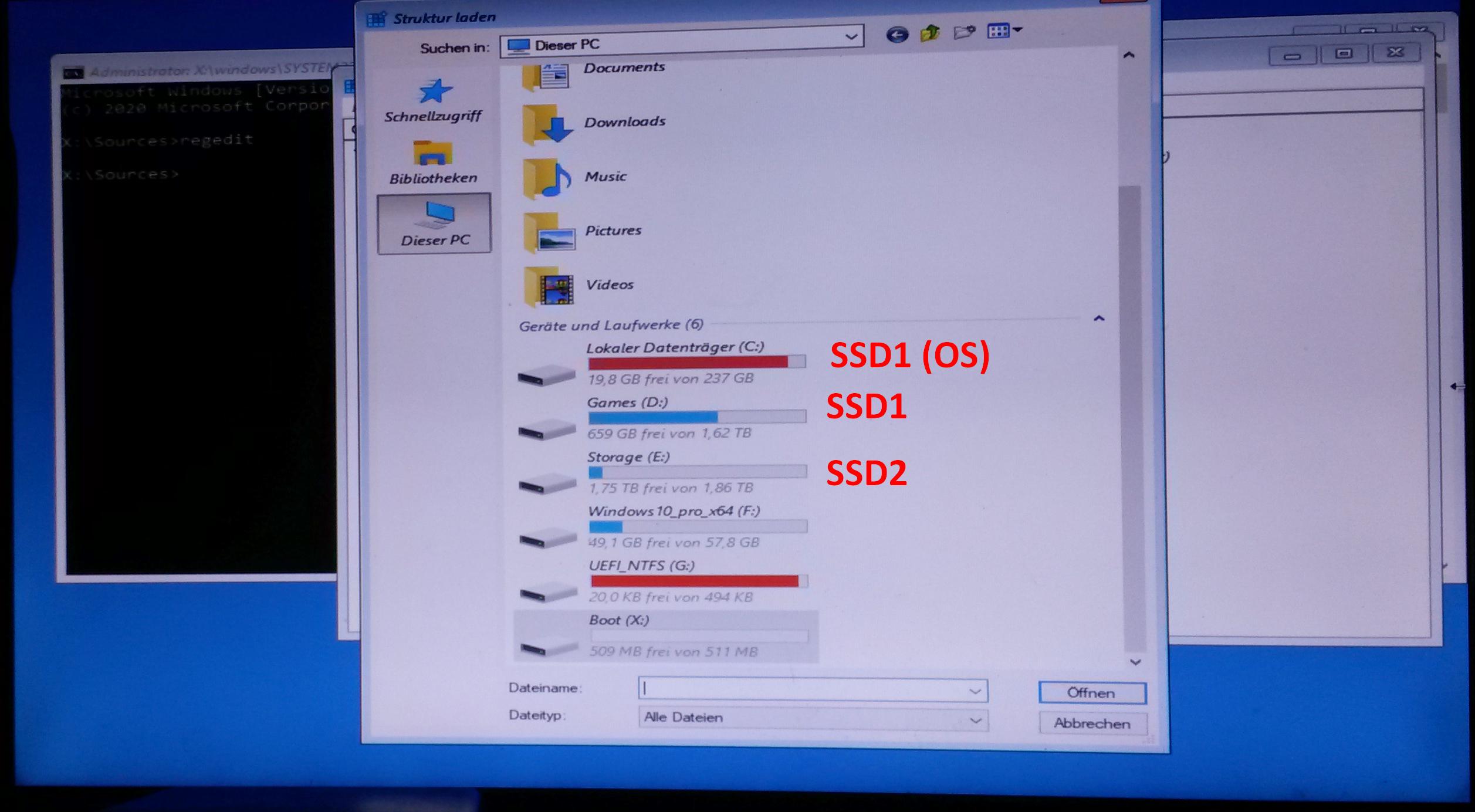 Current status:
Accessing single files works, however I wanted to note something in an existing textfile (reading works) and noticed that writing changes isn't possible on either of my two m.2 SSDs (copy command straight from admin CMD also not working).
I thought this would just be a minor quirk about folder permissions or whatever, but because of this, I also can't fix the boot record or run chkdsk:
(note: The recovery CMD is running as Admin)
bootrec: 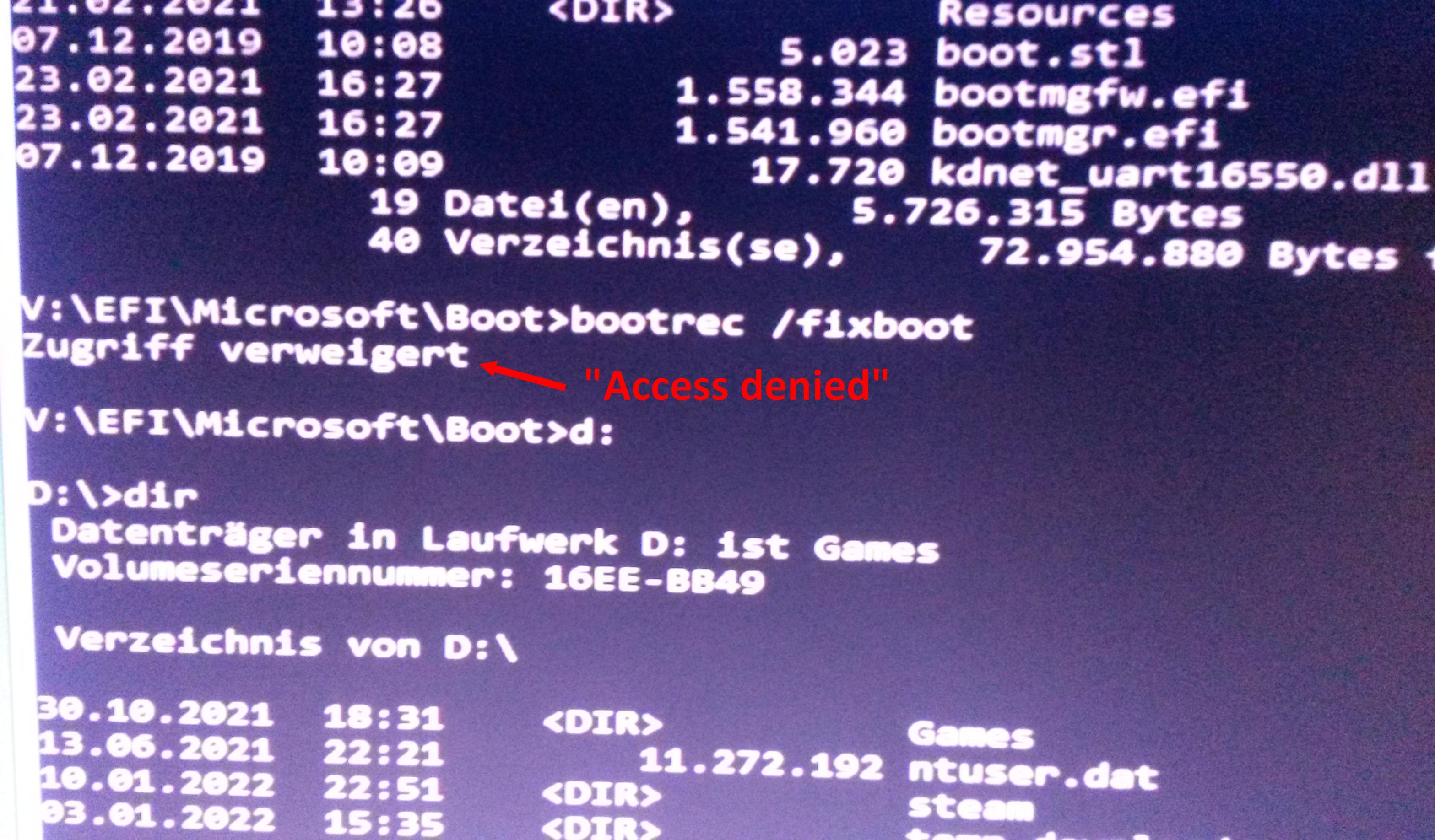 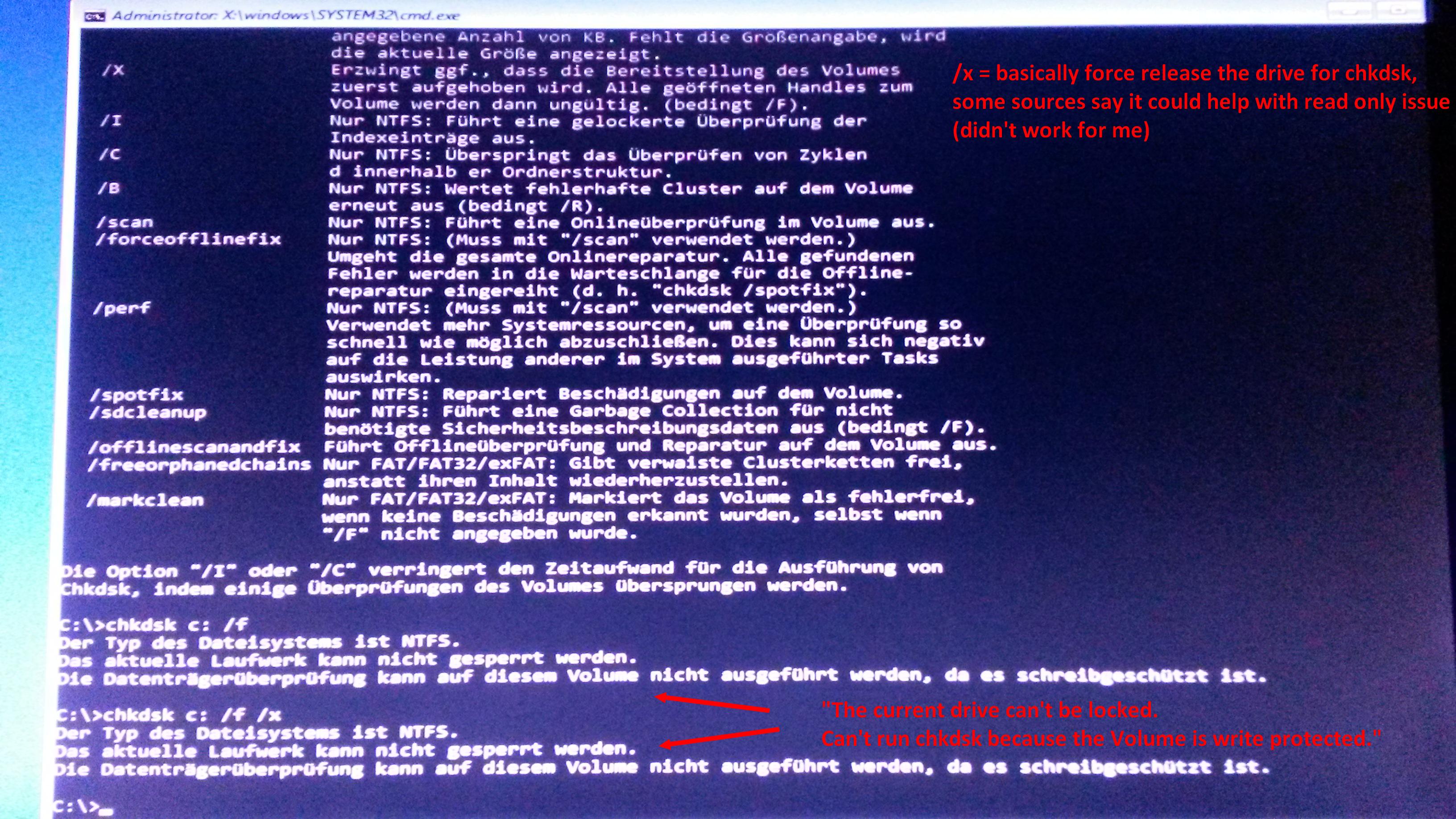 I've been following a guide that explains how to fix the boot manager for GPT partitioned drives (I checked earlier, both drives are GPT, not MBR, though only one of them has a boot partition) and the next step would be to run bootrec /fixboot, which doesn't work because of the read only more.
My next step would be to attempt releasing the read only mode with diskpart. But before I continue, I would like to ask what you guys think of the liquid (could it have damaged them?) and if anyone knows what this write protection is about. Is this a common m.2 thing? Some weird permission issue? Or maybe the write protection was activated by the drive, because of some damage and to prevent it from getting worse ...? (Though I highly doubt that both drives would have the exact same fault at the same time?) I accessed another drive the other day (a regular SSD) with the same method and I could read AND write files with no issues.

Any input on this would be greatly appreciated!

Drives sometimes become read-only when there is corruption in the firmware components, or if the drive runs out of spare blocks.

Can you examine the SMART reports?
0

fzabkar said:
Drives sometimes become read-only when there is corruption in the firmware components, or if the drive runs out of spare blocks.

Can you examine the SMART reports?
Click to expand...

Hmm, how can I do that without loading into windows? Guess I have to prepare some USB stick. Any recommendations for a tool to put on the stick?
0
F

I don't know which tools are "portable". Normally I would use CrystalDiskInfo or smartctl (or GSmartControl). Smartctl has a Linux version.
0

fzabkar said:
I don't know which tools are "portable". Normally I would use CrystalDiskInfo or smartctl (or GSmartControl). Smartctl has a Linux version.
Click to expand...

Thank you for your help so far. I have now managed to get some smart info through a linux tool: 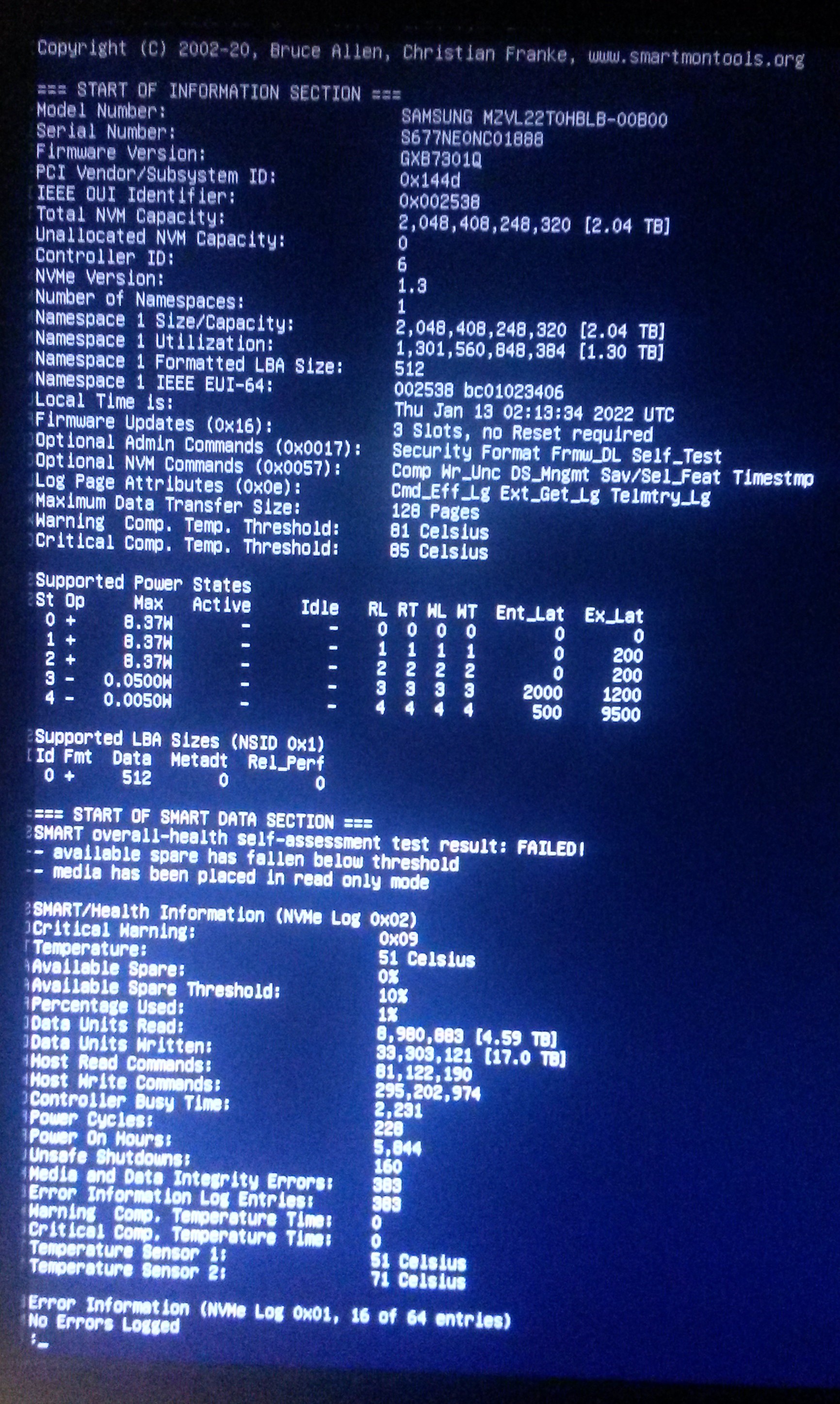 I forgot to make a screenshot of the other drive, but this should be the OS drive.
Any clues what's wrong?
0
F

"Available Spare: Contains a normalized percentage (0% to 100%) of the remaining spare capacity available."