Should I be able to play Metro Exodus on 1920x1080 on ultra spec (minus ray tracing) with the following hardware?

Well from what I have read there is no SLI support at all in that game, so it will likely run better on a single 1080. So that said with a single 1080 you should get around 60fps on ultra 1080p according 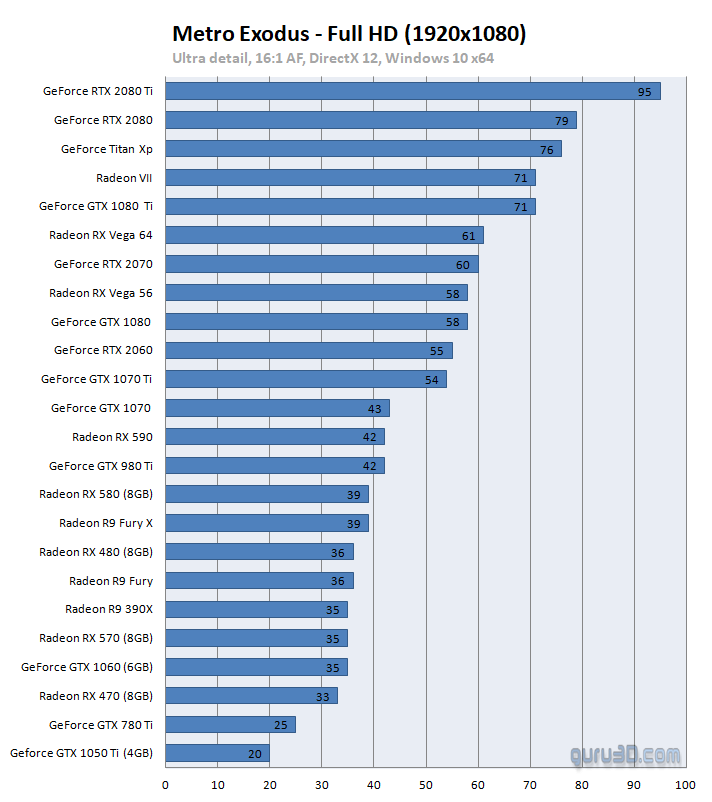 to benchmarks, more if you tweak the settings a bit.
0
M

You shouldn't have any serious problems really. Ultra should be fine in Full HD, but not on extreme. But that is not even recommended with RTX cards.

Also, the above chart is probably from the benchmark and is not representative for the actual gameplay. A lot of reviewers confirmed that the included benchmark is much more extreme. I played that game the whole weekend. I play in 1440p WQHD with a RTX 2080 using Ray tracing on high (no dlss) and my frame rates are usually around 70 fps (sometimes it can drop in the high 50s). Again...that is with ray tracing!! without ray tracing its about 35 to 40% higher fps for me.

So, I don't know if it has SLI support, but 2x gtx 1080 shouldn't have to much problem with this game on ultra (again, there is one higher setting called extreme which is reducing fps by 30% but doesn't offer any real visual improvement). With 1x GTX 1080 it needs to be tested. But it should still run pretty ok.

By the way...its time to get away from SLI....with your next video card don't do that anymore! Less and less games support it and its anyway mediocre in performance gain.
Last edited: Feb 18, 2019
You must log in or register to reply here.
Share:
Facebook Twitter Reddit Tumblr WhatsApp Email Link