Question Missing Socket 1200 pin, can anyone help me find the function of this pin? :/

Is there any of you experts that can identify the function of this pin, and wether it would influence the functioning of an i5 11400F
It's a Aurus Pro B560 Motherboard. Socket 1200

Google was not helpful finding a socket 1200 diagram sadly.

Any information would be greatly appriciated, He is 15, it's his first build and he is panicking over it.
View: https://imgur.com/a/wxjL6uL 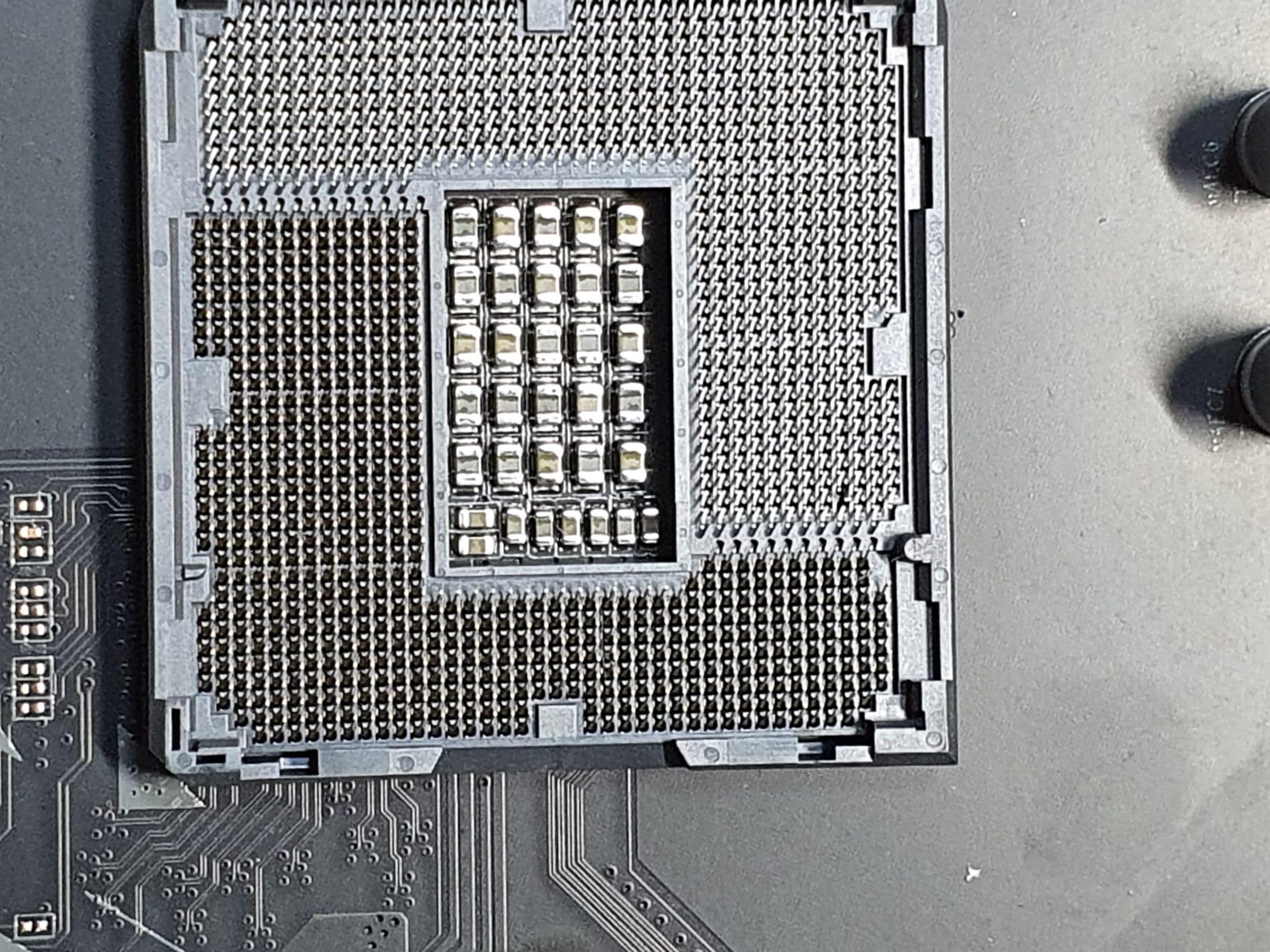 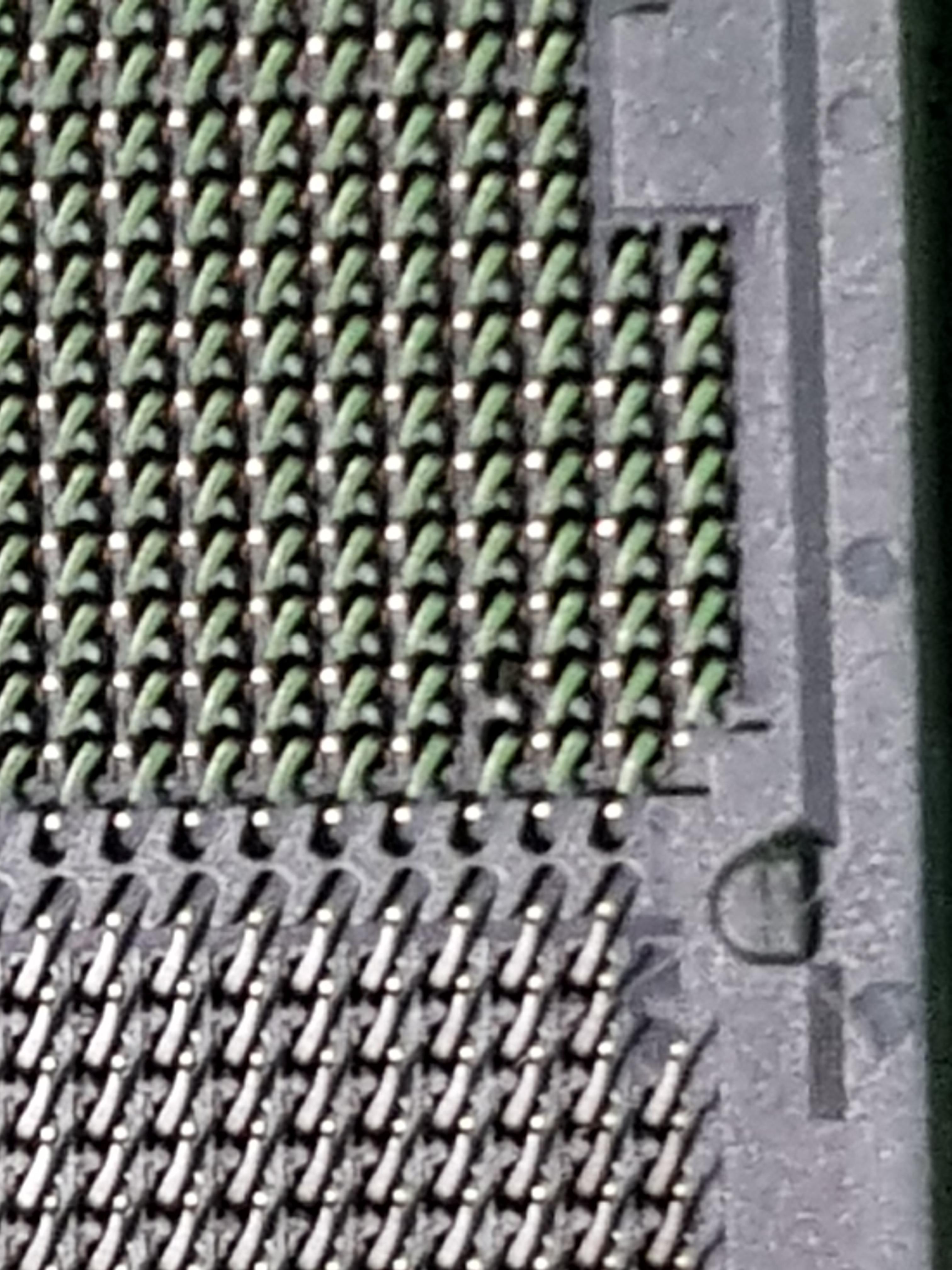 What pin are you talking about, and why would it be "missing"?

Is somebody making an assumption here, or do you know for a fact that one or more pins in the pinbed were damaged?

Has an attempt to assemble this system even been made and is this a new or used board?

Looking at images of other LGA 1200 sockets, they look exactly the same as that one from what I can see in your images.
-1
J

I don't know if you are trolling me, but there is clearly a pin missing, Don't you see the black dot on image 1, and the obvisouly missing pin on image 2 on the same location? I built plenty of systems in the same socket too, i am genuinely confused about your reply.... Are we looking at the same image even?

No he has not attempted to build it, he is very new to building and the painfull process (for him) of building it only to take it apart again if the socket is compromised is going to be a pain for him, that's why i want to make sure wether it's safe to continue before i tell him to. Or attempt to RMA it.
Last edited: Jan 8, 2022
0

It would have been helpful to circle it. I see it, but it was hard on my laptop; you have the advantage of knowing where the pin is ahead of time.

I have not seen an LGA1200 pinout, unfortunately, just older generations. I'd RMA if you can, try it out if you can't.
0
J

Yeah my bad for not circling it, though even without knowing the location the first time he sent me a screenshot i could instantly spot the anomaly. therefor i didnt think it was needed. i am surprised there is no 1200 layout, therefor i contacted gigabyte in the hope they can help with it.

I am simply helping someone across the border building a PC through discord since we are online friends, so i can't exactly help him build it.

Finding it very strange though, i personally have never come across a new motherboard with a missing pin, and i've heard they are very hard to RMA from certain people.
Last edited: Jan 8, 2022
1

Look to the left, below my avatar. Does it look to you like I'm the kind of member who trolls people? I assure you, in the 7 years I've been here you are the very first person to suggest such a thing, so no, I was not trolling you. It would help to have images with better clarity in the future although I understand that in this case, after the fact, we know that the images weren't taken by you.

So, regardless of any other considerations, if this is a new board and it came that way with a pin missing then it is likely that if this WAS a new purchase, which you didn't answer, it was a return to whatever retailer or vendor it was purchased from by somebody who bent a pin and then broke it off while trying to straighten it. In ANY case of a new board, that came with the pinbed compromised, there is no way ever I'd recommend trying to use such a board. It should be returned to the retailer or vendor for replacement.

Even if you could identify the missing pins specific function you have no way, at all, ever, of knowing what else might have been damaged or compromised on the board and it is simply not worth the risk of potentially ruining other hardware by trying to use a compromised board.

If the board was purchased used, then all I can say is, I hope the owner feels extremely lucky because we see people ALL THE TIME who come here in similar situations, get realistic advice from people who've been doing this for a very long time, and then go ahead and do what they want anyhow. And then, generally, come back afterwards not understanding how suddenly their memory, or graphics card, or CPU, is now damaged.

Hardware is rarely, VERY RARELY, able to be repaired regardless that you will see all across the internet, indications by people that they've successfully done so using such and such technique. Mostly, it's pure BS. In some few cases some people have success but by and large when ANY component is damaged in any way that involves a non-removable part (And of course there ARE parts that can be replaced on some hardware such as some processor retention brackets, cooling assemblies, etc.) if you are not a very capable and trained electronics repair person, it shouldn't even be attempted much less should you attempt to use a known compromised part with hardware that you value.

My advice would be to tell the owner of this hardware to return the motherboard and not use it. Anything beyond that is simply rolling the dice and hoping for the best.

Could it still work, with only something like a specific SATA header or USB port not working? Sure, it COULD. Is that likely? Not really, and like I said, even if you knew what system that pin was specifically tied to, you have no idea what else might have happened during the (likely) previous owners botched attempt to use the board. And I say previous owner with pretty full confidence because motherboards simply do not come from the factory with pins missing. Not that I have EVER seen in 30+ years of doing this.
You must log in or register to reply here.
Share:
Facebook Twitter Reddit Tumblr WhatsApp Email Link