Ethernet:
New PC build 2 weeks ago with the MSI Z390M and was initially having Ethernet connection issues. Turned out that the I/O Panel had a scrap flap bent between the Ethernet cable and Port. I removed the motherboard and bent off the flap and reconnected everything. The cable sits somewhat snug, but doesn't make that standard "click" sound when plugged in. The indicator lights are on and things ran fine for a few days.

I started noticing that Twitch streams will lag when chat spams a lot of emotes. I also notice my mouse cursor lag during the event when I drag it across the screen. I have disabled Hardware Acceleration in Chrome, only watch streams in 480p, disabled extensions, so on and so forth... Yesterday I decided to watch Twitch using Opera browser and experienced no issues, but my CPU usage was fluctuating between 7-11% (Typically 4-6 when watching multiple streams in Chrome) then eventually started lagging again. A few moments later my PC BSoDed and rebooted. Today while playing a game and watching a stream on my 2nd monitor, I noticed the stream page turned white stating "No internet connection." Eventually my game disconnected as well, but reconnected seconds later. Less than 3 minutes later my PC BSoDed again. I went to Device Manager and updated my Ethernet and Wifi Drivers (both had updates). Not sure if that will resolve issue.

CPU Usage:
I9900K - Noctua NH-U9S Heatsink (not optimal for this CPU I know, separate story). Prior build from 2012 was I7 3930K and I can vaguely remember usage ever going above 28% under the heaviest of loads. Typically when I ran apps, games, or browsers on my old build, I will notice my RAM usage increase, but with this build it is all CPU intensive usage. Examples: Thinkorswim (TD A) - 20-24%, Rocket League - 20-24%, Call of Duty: Warzone - 30-42%, with CPU Temps of around 51°C - 62°C. All while the RAM and GPU usage appear to be minimal or average. The CPU usage seems to be more than RAM usage when under load. Just seeking help or guides on what I can check, test, or report to help resolve these issues.
EDIT: I do not dabble with Overclocking, I only have XMP profile enabled in BIOS so RAM can run at 2666.
EDIT 2: BSoD again moments ago after starting CoD: Warzone. HW Monitor wasn't showing any extreme temps or usage (CPU Usage around 10-24% (40-60% between loading), RAM 19%, GPU 36%). Temps: CPU 52°C, GPU 56°C.

The Even Viewer errors are all the same: Level: Critical | Source: Kernel-Power | Event ID: 41 | Task Category (63)


Current Build below, and thanks in advance:

Update: I didn't have CPU2 power cable plugged in on the Motherboard. That reduced CPU usage and overall lowered temps. BSoD again this morning though with little to no strain on system (Chrome, Thinkorswim, Discord). I've ran DISM and SFC scans and both came back clean. 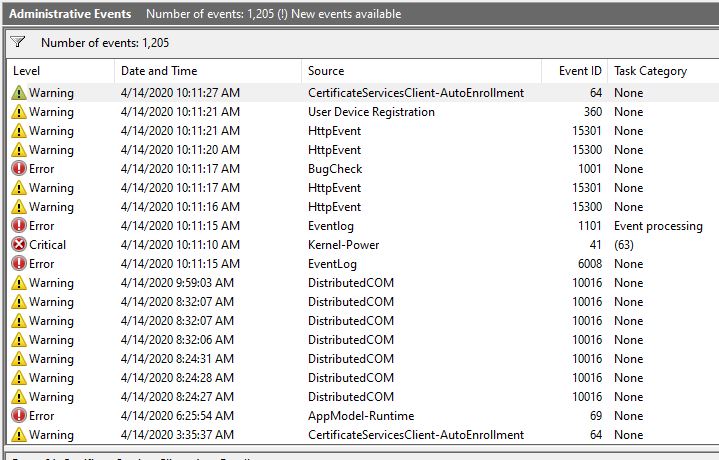