I have a gigabit fiber connection from my ISP. Before buying this router (a Netgear R6220), I used to connect directly to their gateway (a ZTE ONT which also acted as a router with AP), however I soon had issues with it simply dying on me when downloading at high speeds (nowhere near the gigabit level tho, it would usually break at around 400-500 Mb/s tho it would sometimes hold longer), and the only way to get it back up was to reboot the gateway. Needless to say, this got pretty annoying soon, and after having a talk with one of the ISP's technicians, they suggested setting up an actual router to let the ONT work in bridge mode and have the router use the LAN1 port of the ONT as it's WAN port, effectively letting the router do the AP and routing part that the ONT was previously also doing.
I bought the Netgear R6220 router, and at first it seemed to have worked. I managed to get 115 MB/s down the day I set it up the first time, and was pretty happy. However, I realized that soon after reaching said speed the network failed again. This time both the ISP provided gateway and the Netgear router were still working and didn't have to be rebooted, but I couldn't access either from the PC I reached those speeds on until after about 2-3 minutes, time in which the WiFi on other devices throughout the home was working fine (I don't have any other wired devices so I can't say if those would have worked). As soon as I could access the router and the internet again, I did a speed test and it looked as if I was capped at 100Mb/s. I logged in into the router and I found this:

(The uptime was actually less than a minute back then, but I just took the screenshot now)

Restarting the router resets the status to 1000M/Full, but I don't know any other way of doing this. Also, this has happened multiple times (5 in the space of just 2 days), and sometimes at much lower speeds too (600 Mb/s).

So, the question would be, how can I make sure if this is a router or a PC problem (or perhaps something else)?
0

On your PC: is the network adapter configured for automatic speed and duplex?

Your PC being on Port LAN3 - correct?

Have you been able to try another known working (at speed) Ethernet cable between Router and PC?
0
D

On your PC: is the network adapter configured for automatic speed and duplex?

Your PC being on Port LAN3 - correct?

Have you been able to try another known working (at speed) Ethernet cable between Router and PC?
Click to expand...

That's indeed the manual for the router.
It was set to auto negotiation but I set it to 1Gbps full duplex after the last incident.
Yes, my PC is on LAN3. It's on LAN3 because I switched from LAN1 the first time it happened, then to LAN2, and then to LAN3 and left it there since. I'll try LAN4 now.
Unfortunately I literally can't test with another cable. I live in a house and the router is 5 rooms away from the, yet the cable instead of going to a wall socket, comes directly trough the walls to the PC - so there is one single ethernet cable connecting the PC to the router, which runs trough walls.
0
B

You need to leave the setting on auto. Setting the rate to some fixed value only works when you can set both ends and almost all consumer routers only run in auto mode. It is very common for them to drop to 100m when you do that....sometimes it will even run half duplex...so always leave it in auto.

Pretty much the only things that will cause it to run at 100m are bad ports or a bad cable. Bad ports are very rare but bad cables are very common.

First be sure the cable you are using is not fake cable. Ethernet cable must be pure copper (no CCA) and have wire size 22-24 (no flat or thin cables). Problems with cables are almost always with the ends which is good in situations like yours where replacing the whole cable is difficult.
You can recrimp the ends but it will likely take a couple tries if you are new. What tends to be easier for new people is to use keystone jacks and then a short commercial patch cable. Many keystone jacks sold in home improvement store are tool less or include a cheap punch down plastic device. Keystones you can do 1 wire at a time rather than trying to get all 8 lined up in the crimping tool.
0

What is printed on that Ethernet cable? How much of it can you see and inspect?

Do the termination plugs appear to be securely and squarely installed/terminated?

Is it at all possible to move the PC closer to the router and try a different, shorter, known working at speed Ethernet cable between PC and router.

Or maybe use laptop at speed at both locations to compare the speed results?
0
D

Thank you both for your answer, and sorry for the late response but it has been a busy weekend for me.
@bill001g I changed the setting back to auto negotiation, but it didn't seem to change anything (just like changing it from auto didn't help before) - it still happens. Also, just to make sure I explained properly, the main issue isn't that it goes to 100, but that it first dies completely.

@Ralston18 I can access about 3 meters of it on the computer side and 1 meter on the router side. I could only find the following printed repeatedly at regular intervals on the cable: 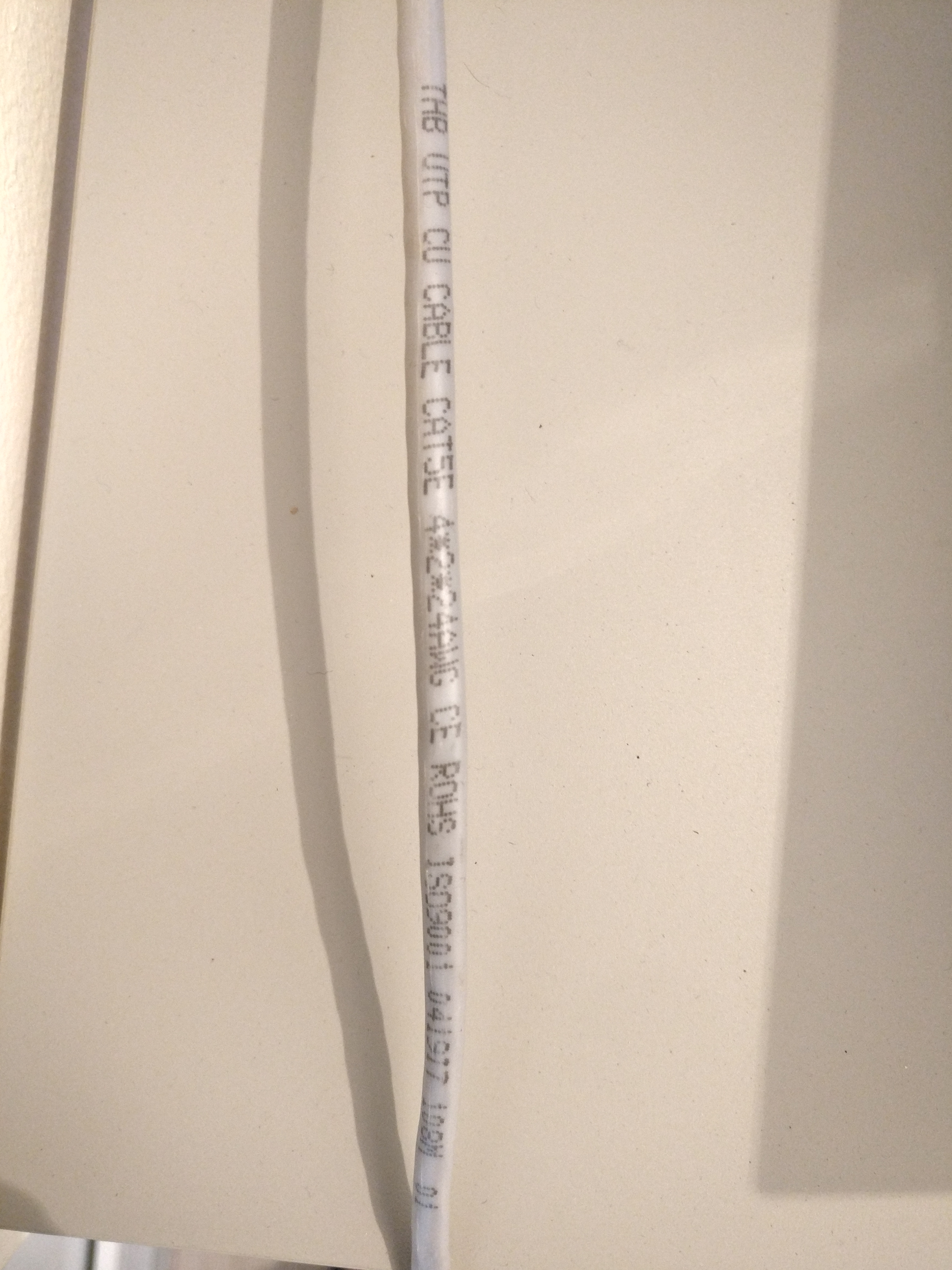 The cable is about 5mm thick (it's diameter), and it looks properly connected at both ends.
I do have a small, new cable that came with the router which looks a bit thicker than this (and newer, for that matter) than this. However that one is only 1 meter long and I can't move the PC upstairs where the router is (it is certainly doable, but would require a lot of work, and I'll have to bring it back anyways).
Unfortunately I only have rather poor laptops available, both of them only being capable of 100M, the only gigabit capable device being the PC.
I'll order a new cable (they seem pretty cheap and I can always return them for any reason within 2 weeks) long enough to reach the PC from the router (without going trough walls like the other cable), and report back with the results.
Thanks again guys!
Last edited: Nov 23, 2020
0
B

That cable tells you all you need to know. The CU means it is copper cable. The wire size 24. This cable should be fine.

It almost has to be the ends the cable itself almost never fails unless there is some physical damage to it and that seldom happens after it is has been installed. Maybe a rat or a nail but it won't fail just because it is old.

If you buy a commerical cable and rerun it that tends to be easier for a beginer rather than crimping ends on the cables. The cost of the tools and the plugs may be more than buy a new cable. On very long cable that are expensive or in cable that is very difficult to reinstall replacing the ends is a better option.
0

Good photo - very helpful and the cable quality question has been well answered.

One question more out of curiosity: In the photo I see 108M which I believe is probably a length marking.

What value is printed on the other end of the cable? No need for a photograph - just the number if there is one and the number is not 108M.

Again, thank you both for your answers. I guess I'll just wait for the new cable to arrive and try it out.
@Ralston18 I checked the other side and it says 086M. If they really represent length markings then the difference between the two should roughly (as the markings aren't exactly on the end) be the length of the cable - in our case that's 22 meters, which sounds about right. Since the length markings are so high though, that probably means this cable was cut from a longer, 100M+ piece. Could that be an issue? The cabled was provided and laid by our ISP.
0

No. The length of the original cable/ cable reel is moot.

As long as the working length is 100 M (328 feet) or less there should be no problem with length.

Your 22 meter run length should be fine barring, as mentioned, some physical damage along the way.

Inspect as much of the run as you can safely see. Pinches, kinks, hard bends, nails and staples, rodent chews. water,

The ISP installers are not always well trained and often are being rushed to do more. Neither one being the technicians' fault per se.

Some techs do try very hard to do a proper job.

However, there are always a few techs who will just cut corners anyway because is it easier for them.

Cable routes can take some interesting detours or go where no cable has gone before nor should have gone there to begin with.
0
D

I got the new cable and set it up. After a few minutes of downloading at ~900 Mb/s it failed again. Also, not sure if related, but the wifi network failed too (another time, not when downloading on the cable), multiple times. Apparently it's been going on for quite a while but I didn't know about it as I'm not the one using it.
So I'm pretty sure now the cable wasn't the issue, rather one of the two: ONT or router. I excluded the PC as I now know the wifi was also failing (and by that I mean while you would still technically be connected you wouldn't be able to reach the internet). However I know I can connect to the router's admin panel all the time, even when I can't connect to the internet, so I'm starting to think the ONT might still be to blame. I disconnected the router and connected my PC directly to the ONT and logged in from the PC using the PPPoE username and password I was given to configure the router with. To my surprise, I had the same issue: after downloading at high enough speeds for even 30-60 seconds, the network would fail, coming back up after around 2 minutes. It seems to be even worse than when I had the router connected, somehow. Should I ask the ISP to change the ONT? Is there any chance there might be something else causing this?
You must log in or register to reply here.
Share:
Facebook Twitter Reddit Tumblr WhatsApp Email Link