I’m about to upgrade my rig with Gigabyte X570S AERO G mobs and Ryzen 5900x. I’ll be keeping the GPU’s ( 1080ti / 2070 super, both hybrids ), case ( Corsair Air 540 ), etc…
My two questions are -
1, Thinking about changing to air cooler but not sure if it will make system quieter, this is not my only reason though ?
2, If I go with air cooling, how should I setup air flow ? Currently I’m bringing air in through the top and back. Exhausting through the front. Also worth noting that this would free up the top so could add two more fans there.

Please note that in the photo my rig looks super dusty / neglected. We just had a load of plastering done in my home & everything got covered. It’s nice and clean now. 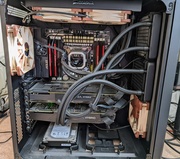 What are you using both GPUs to do?

Why not keep your 240mm AIO for the CPU?

Your case airflow is certainly....unique.

Are your GPU rads passively cooled?

Why not move the GPU rads down a slot and move the front open fan to the top of that stack. Set all front to intake.
CPU rad would exhaust
Rear fan exhaust.
0
A

Yes, definitely a unique airflow. I’m sure it could be better and I’ll try out your suggestion with the new build.

Both GPU’s have fans, so not passive. They are currently pushing air out at the front.

So better to stick with AIO for the CPU ?
1

andrefry said:
Currently I’m bringing air in through the top and back.
Click to expand...

That is exactly the reverse of almost all case designs and airflow.

In the front, out the top and back.
1

Will the cpu or the gpu/s be the most heat generating component of your system?
If the gpu/s are most important, you would want their radiators to be taking in fresh air.
Then, the cpu should exhaust heat out the top.

If the cpu is more important, then continue as you are.

If you change to a top twin tower cooler like a noctua NH-D15, you can expect it to run quieter.
The cooling should be similar to what you have now.

I can't help but thinking that you would do well with a bigger and better ventilated case.
0
A

GPU's definitely the most important. Maybe time for a case upgrade before new build ?
Any case recommendations would be appreciated. I’ll be doing some research this end for sure. Cheers
1

I've seen plenty of reverse airflow pc's, works the same as standard orientation, only requires flow to be correct. Which it isn't in this case.

The top intakes will overpower the rear intake, forcing air straight down, and then the front 3 exhausts are trying to snatch that sideways. It's not efficient. Heat and air don't like changing directions. None of which hits the gpu fans, just the top plate and bounces off.

My suggestion would be to feed the gpu. Flip every fan. The lower Noctua will feed the gpus plenty and the rads will take care of themselves. Whether or not you use the rear exhaust at all is debatable, you don't have a tower cooler, so there's actually no need for that fan. Warm case air will naturally go to the top of the case, the top exhaust fans will just help that process.
1

It is not clear to me what it takes to mount the rads for your graphics cards.
It looks like about the space for a 120mm fan.
Look at a cube type case which can have perhaps 4 front 120mm intakes.
Two for your gpu radiators, and 2 more to feed an air cooler.
Anidees makes some interesting such cases.
Here is the A17: 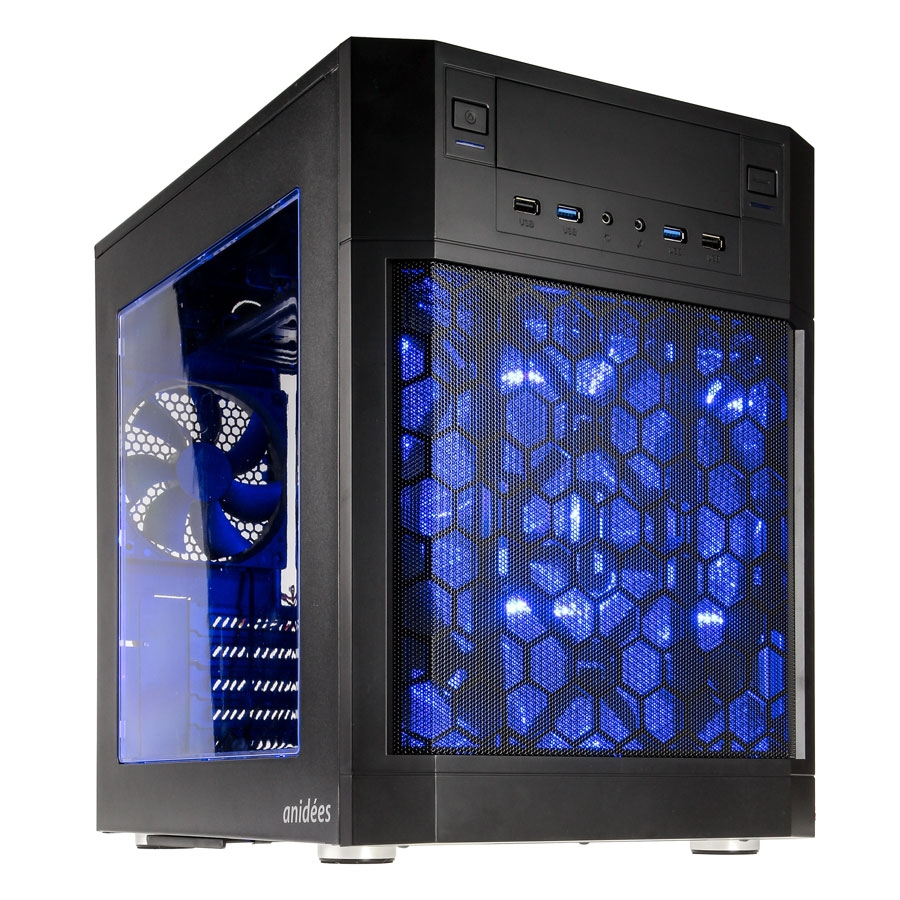 Dual Chamber ATX chassis focuses on cooling performance and maximum configuration Dual chamber design divides hot running components, one chamber deliver cooler air to MB, CPU, GPU, another one for HDD and PSU. Chassis comes with four 120mm led fans in the front and also can be upgraded with...

anidees.com
There are others.
They seem to want to sell RGB bling, but I would turn that off if you do not lie it.
0
A

Some great advice here, Cheers!
The Anidees looks great but not available here in the UK. I’ve looked into some cube cases but most seem to be the same’ish setup as my current one but I'll keep looking around.
Would a large tower case help with some fans on the bottom ? The Phanteks Enthoo Pro 2 looks massive but lots of fan options, maybe overkill ?
1

Every case design has its own set of challenges concerning airflow. MITX has a lack of fan options, and little space for airflow. MATX / ATX are more versatile, but Full ATX towers are the opposite. There's simply a massive amount of volume and distance to move the air, and that requires more or stronger airflow fans.

Optimizing airflow is more about the fan, the fan size, fan placement and orientation. I ran a Fractal Design R5 with the door closed for years with nothing more than 2 case fans and an Aio. No rear exhaust. Just 2 on top and aio intake, or switched. Air in front, out the top, smooth flow.

Having more fans, badly placed fans, counter productive fans can easily be worse than better.
View: https://youtu.be/OupiPZybyBE
Case airflow is all about understanding Cause and Affect. What is causing the heat and what is affecting it and the results.

Your case is most likely situated near a wall or cabinet, a solid surface. Your gpus are liquid cooled mostly, but do also use a blower fan. That exits heat out the rear of the case, where it gets channeled up the wall, to get sucked back into the case by that rear intake.

The rads are a diffuser. They really don't stop air volume, they block air pressure. Put your hand 18" away from your face, take a deep breath, open mouth wide and blow out. No breeze. Purse your lips and do the same, you've moved the same lung full of air, but you feel the air on your hand. Having the fans in front of the rad, push, has the same affect. Air doesn't move anywhere, sits in the front of the case, getting warmer.

You don't have a case issue, what you have is a placement issue. Your pc fans are fighting themselves instead of helping. And that's creating more noise as a result.

Put the 120 as intake, pull. That alleviates pressure dispersion by the rads and provides air to the gpus. Put the rear as exhaust so you aren't sucking heat back into the case. Top fans as exhaust push (under the rad) to provide lower pressure up top and promote flow.
Last edited: Mar 9, 2022
0
A

Huge thanks, Karadjgne.
This is super helpful.
0

4pin are pwm, digital fans. They'll drop as low as 15% (ish) and that can make a huge difference vs analog since fan curves can be set far lower. You don't need 100% fans when the case is only 40°C etc.