This is driving me nuts - while PC is asleep, power button is flashing but neither mouse or keyboard will awaken it. Pushing power button starts case fans, RGB turns on, mobo red cpu light turns on and the F3 key will barely light up but no others and no post. If I hold power button, system restarts red light turns on briefly, then white light, then it boots up fine. Has anyone ever had this problem and solved it? I've played with power settings, ErP ready, Device Manager and Group Policy settings. Nothing has worked so far.

This thread on the MSI forums seems to indicate that the 1.15 BIOS for the MSI Z690- a pro was taken down. I also have this sleep problem with the MSI Pro Z690-A DDR4 WIFI, and it seems all that can be done is wait for a BIOS update.
1

Disable OC Genie and run at default configuration. See if you still have the same problem. If you do, uninstall OC genie and any other bundled software that came with the motherboard or was downloaded from the MSI website. See if you still have the problem. It stands to reason that you'll want to restart between each of those steps to reload the registry and boot manager configurations.

Also, make sure that in the advanced settings of your "High performance plan" under Processor power management, that min is set to 8% and max is set to 100%. Also make sure that in the BIOS you have Intel speed step enabled (I also recommend disabling Intel speed shift, because so far I haven't seen it do anything except cause issues whereas Speed step has always seemed to work fine.). I would also recommend that any low power state settings in the BIOS be set to their default configurations, whether that means enabled or disabled or auto. Generally, either enabled or auto for all C-state/low power state settings. The milliseconds that it takes a CPU to go from an 8% idle state to a full powered 100% state is so miniscule that you'd never be able to notice any lag and it's rare that all cores are every fully at idle anyhow.

The idea that you want the CPU to remain at 100% all of the time, even on overclocked configurations, is ludicrous, and aside from some specialized testing regimens, entirely unnecessary and not recommended. Package temps will actually tend to be lower, and therefore boosts or active cores able to maintain peak frequencies longer, when cores are able to "rest" at times which helps to lower package thermal condition.

The biggest problem and most likely fix though, are to disable hybrid sleep/fast startup and hibernation. Simply disabling hibernation disables the rest and for a majority of sleep related issues the poor implementation of these states often has caused problems in Windows 10. Not least of which is not actually "restarting" or "shutting down" when you thought you were, but also resuming from sleep or sleeping for no reason.

It's always definitely worth a shot when sleep problems occur on Windows 8.1 or 10. 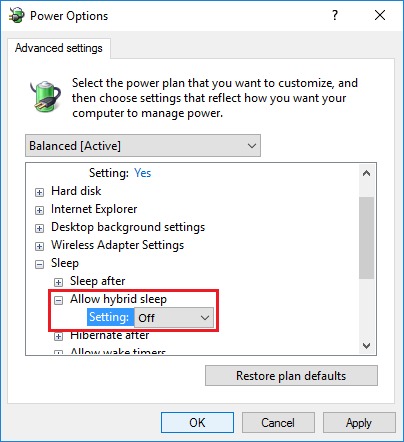 How to disable Sleep Mode or Hibernation

We have seen a few problems with Sleep Mode and Hibernation in Windows 10, so I wanted to write this article to explain how to turn either of them off in case you would rather not use them.


You should definitely make sure that you have the most current stable motherboard BIOS release version installed as well, as this often fixes a number of problems related to memory and other hardware compatibility, bug and microcode fixes and other issues including sleep or C-state related problems.

And if you're going to overclock, learn to do it in the BIOS. Overclocking using these "automatic" manufacturer utilities is almost always problematic in one way or another, as is using most of their bundled software. Automatic "anything" type utilities that mimic what ought to be done in the BIOS, is more often than not an invitation to troubles.
0

I appreciate the response. I disabled XMP and OC Genie. OC Genie is built into the BIOS. It can't be uninstalled afaik, but can be toggled on and off. Anyway, I did everything else listed and unfortunately none of it worked. Hybrid/hibernate modes are disabled. So, I spent more time researching ways to fix it. After multiple tries and messing with different settings, the computer woke just one time with OC Genie and XMP disabled, but the red cpu light on mobo persisted. Neither mouse or keyboard woke it. I had to push the flashing power button manually, as usual. PC ran fine. I haven't been able to get it to wake up again though. If I try to wake with keyboard, the F3 key will turn on dimly. No post. Any other ideas what could be causing it? Maybe the PSU is the problem? It's from an older build (2018).
0

It's doubtful that this is a PSU problem, but maybe possible. What is the actual model of that unit? Plus, not very old, so unless it's a real turd it's not as likely as something.

Was your current Windows installation ever used with a previous system than the one it's being used with now? Like, a prior build?
0
T

I also have this problem, and its been super annoying. But turning off OC Genie fixes the problem. "powercfg.exe /h off " did not work either. I just want to OC and put my computer to sleep darnit!

What happens is.... Put to sleep, goes to sleep, wake up from sleep, fans/lights turn on, CPU BIOS light blinks once, then stays on, and the computer just sits there, no display and doesnt go to BIOS. Hold Power, turns off, turn back on normally, and then the computer starts up fine with no problems.

Also, if i just OC the CPU alone it does it, and if i use the XMP profile alone it also does it. But does not do it if I turn them both on. And obviously when both are on it does it.

I do not have this problem.
Before setting things up, I violated my own rule and updated the bios to the beta bios 1.15

And, in the bios, you want to enable USB devices to wake up.
It is off by default.
0
T

geofelt said:
I do not have this problem.
Before setting things up, I violated my own rule and updated the bios to the beta bios 1.15

And, in the bios, you want to enable USB devices to wake up.
It is off by default.
Click to expand...

I'll take a look at that and see if it fixes anything, wont be able to check back in till later today though. thank you
0
W

This thread on the MSI forums seems to indicate that the 1.15 BIOS for the MSI Z690- a pro was taken down. I also have this sleep problem with the MSI Pro Z690-A DDR4 WIFI, and it seems all that can be done is wait for a BIOS update.
0

The Beta BIOS version for that board, from 11-30-21, seems to still be available unless that is a different Beta BIOS release, which I doubt, since you pretty much never see multiple Beta BIOS releases sitting on the same page. I also can't seem to find any indications anywhere other than that thread that lead me to believe that the comment about it being taken down is anything other than just that one persons assertion. IF in fact it is accurate, you might want to contact MSI to see if they may have an unreleased alpha or beta version that addresses your problem, which occasionally happens, otherwise, again, IF it is accurate and no other release is yet available then I'd agree that you might simply have to wait. Speaking with MSI support would be a good place to start.
0

Being a bit concerned since I have installed 1.15 I checked the support site today and found it missing.
Running on windows 10, I wonder if it was withdrawn to fix some windows 11 issue; (that is just speculation). I noted a comment "new bios release" but only the original showed.
Likely, a revamped 1.15 is in progress.
0

Unless I'm missing something, seems like it's still there to me. 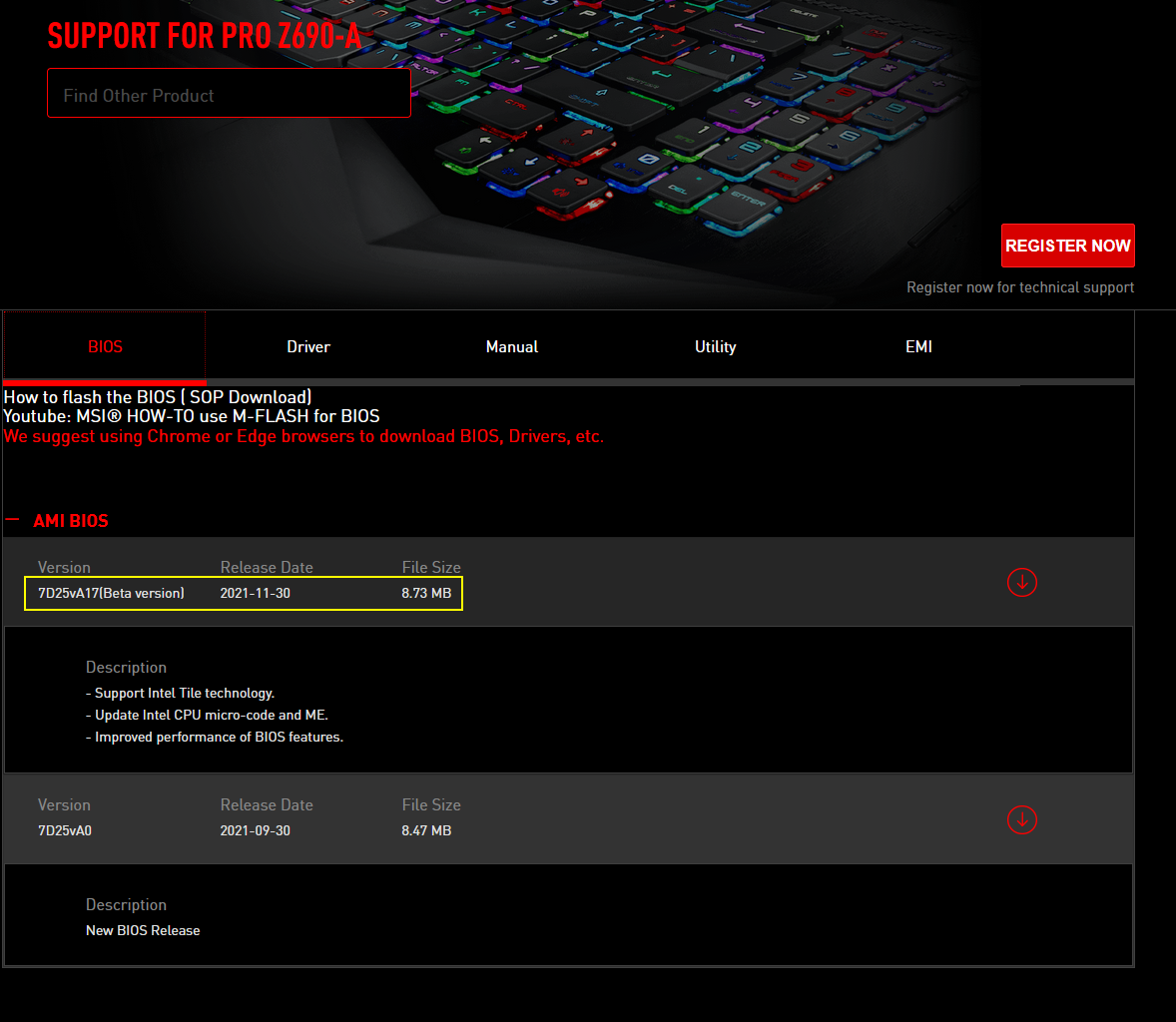 Here is the bios support link for the MSI A PRO wifi DDR4
https://www.msi.com/Motherboard/PRO-Z690-A-WIFI-DDR4/support#down-bios
The A17 beta version linked is not to the same motherboard.
0

You're right. I was looking at the DDR5 version. The DDR4 version does have the beta BIOS removed. My error.
0

it seems all that can be done is wait for a BIOS update.
Click to expand...

You were right. Updating the BIOS fixed it. The version that currently works is 7D25v11. The original 7D25v10 was the problem. 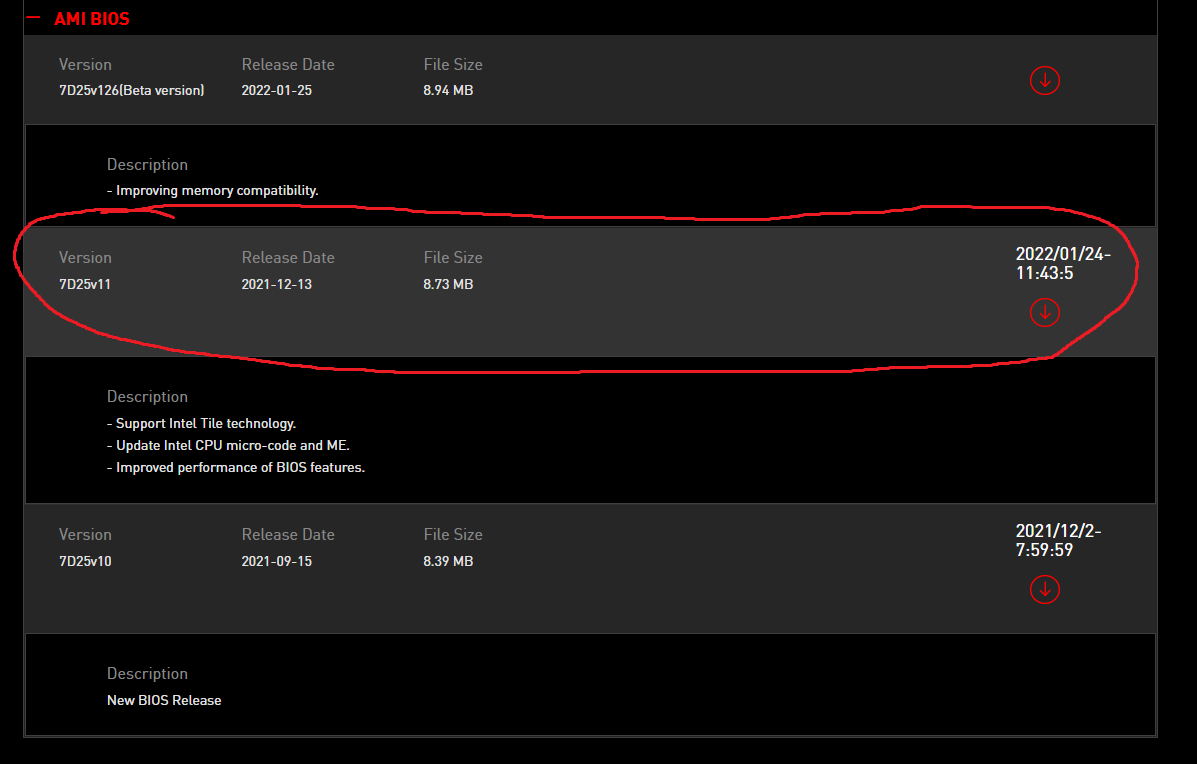