I noticed a TV out on the street that had been thrown out. It was near my house, so I thought why not take it and have a look to see what is wrong with it.

Plug power cord into outlet. A very faint sound can be heard coming from one of the components on the power supply board. Power LED is red which likely indicates standby. Press power button and light turns blue (probably indicating ON status). After this, that same component makes a more noticeable constant noise. I can’t really describe it, it’s buzzing or chirping, just a constant sound that doesn’t stop. Screen is pitch black. No backlight or anything like that can be seen upon power up. It seems to stay on. There's no flickers of images or anything like that.

If the board is just plugged into the mains, it makes no sound at all. As soon as the main board gets plugged in, it makes a faint sound on standby mode and gets louder if I press the power button. 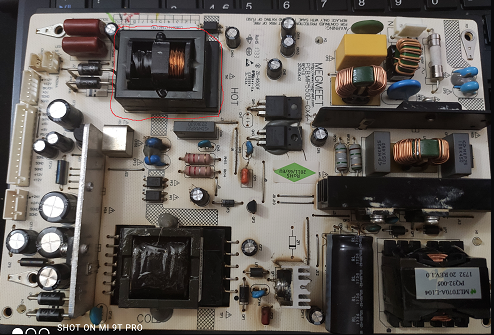 The component that makes the sound is circled in red on the screenshot.

I’m suspecting it’s either the main board or the power supply board. Any idea what it might be? What does that circled component do? And what would make it produce a noise?

My first guess was since the power supply board is producing the noise, it has to be that board. However, it could also be something the main board is doing. I’ve read some threads of similar issues and it’s turned out to be the main board, only difference is I see power LEDs.

Transformer, don't know what part of the board it's for though. This may help https://jestineyong.com/test-lcd-inverter-transformer/