So, for a little background. I've been getting random BSOD for a few months but have been ignoring it. Not my best idea. Anyhow I recently looked into trying to fix it to no avail. However on reinstalling Windows 10 it has changed. Before it was happening during a session, but now it Blue Screen's during startup, but only the first initial startup. After it restarts from the blue screen everything seems fine until I shut it off and back on again. Hopefully someone can point out an easy fix for me. haha. Just going ahead and saying thanks to anyone who takes a look at my issue.

CronoRage said:
but now it Blue Screen's during startup, but only the first initial startup.
Click to expand...

I wonder if turning this off will fix that - https://www.tenforums.com/tutorials/4189-turn-off-fast-startup-windows-10-a.html
if it does, its likely real cause is a driver. If the driver was written before Win 10 was created, it might not like the new windows power modes that win 10 uses. Its common problem for old drivers.
0

I wonder what driver is using that area of memory, I seen 4 people this month all with same memory address
ntoskrnl.exe+3f72e0
ntoskrnl - windows kernel. it did crash but only as it is involved in almost everything PC does

I will ask a friend to convert dumps

Ah. Forgot that part. Not sure how much of the specs you'd like. (Or honestly how to get them beyond the basics. Sorry about that. haha.) So just let me know anything I should add?

We will see what dumps show before we worry about what else is in your PC.

I want to compare your report against the other people i seen this month and see if any similarities.

one thing I can tell is its not restricted to just one CPU type, one person has AMD, other has Intel
it doesn't seem to be GPU drivers as one has AMD & other Nvidia
its not motherboard since they both have different makes
its not ram as one checked theirs.
it doesn't seem to be windows.
unlikely you have same PSU

these are just for me:
Intel
AMD

I don't see any similarities in driver listings between those two either.
I don't normally do this, it just seems too much of a coincidence
0
C

Well like I said as well, this started months ago and I only just started to try and fix it. Though I do think the number of BSOD's increased recently, which is what made me start looking into the issue. And on trying to fix it with a reinstall of Windows 10, changed when it occurs. (Though I suppose it could still happen during a session. I just haven't had it happen since the reinstall a few days ago.)
0

CronoRage said:
but now it Blue Screen's during startup, but only the first initial startup.
Click to expand...

I wonder if turning this off will fix that - https://www.tenforums.com/tutorials/4189-turn-off-fast-startup-windows-10-a.html
if it does, its likely real cause is a driver. If the driver was written before Win 10 was created, it might not like the new windows power modes that win 10 uses. Its common problem for old drivers.
0
C

Well I'm unsure if it's fixed, but I can say that after unchecking that and shutting it down and back up no BSOD occurred. I'll definitely keep an eye on it and post here should it happen again.
0

on older hardware, it can be all that is needed. Windows might be slower to boot now unless you use an ssd. Then you may not notice a difference.
Fast startup mainly there to make hdd seem faster than they really are. It doesn't help ssd.
0

Hi, I ran the dump files through the debugger and got the following information: https://jsfiddle.net/gs9vn8r3/show This link is for anyone wanting to help. You do not have to view it. It is safe to "run the fiddle" as the page asks.

Comment: The overclocking driver "AODDriver2.sys" was found on your system. (AMD Overdrive)

This information can be used by others to help you. Someone else will post with more information. Please wait for additional answers. Good luck.
0

unexpected store exception and Kernel Data inpage errors both talk about virtual memory.
the store is used by the CPU to keep track of the contents of files in virtual memory, they can be in one of two places, ram or page file
Kernel data inpage - i think this is page file.

its possible its a driver
depending on chipset of your motherboard, these shouldn't be used with win 10

Desktop systems based on AMD 6-Series, 7-Series, 8-Series, 9-Series, Socket AM4, and Socket TR4 chipsets running Windows® 10 should use the Microsoft provided Standard SATA AHCI Controller driver that comes installed with Windows® by default. This configuration ensures compatibility and offers the best experience with most types of mass storage devices.
Click to expand...

this page shows how to remove them - https://www.amd.com/en/support/kb/faq/pa-250

crashes 1,2 & 3 all have simiar steps, cpu looks for info in ram, can't find it, accesses page file, actions the file and only after going back to ram again does it crash.
crash 4 not so clear.

I attempted to follow the guide for the driver but the 'Rollback Driver' button was greyed out for me so I couldn't do it. I also ran CrystalDisk. 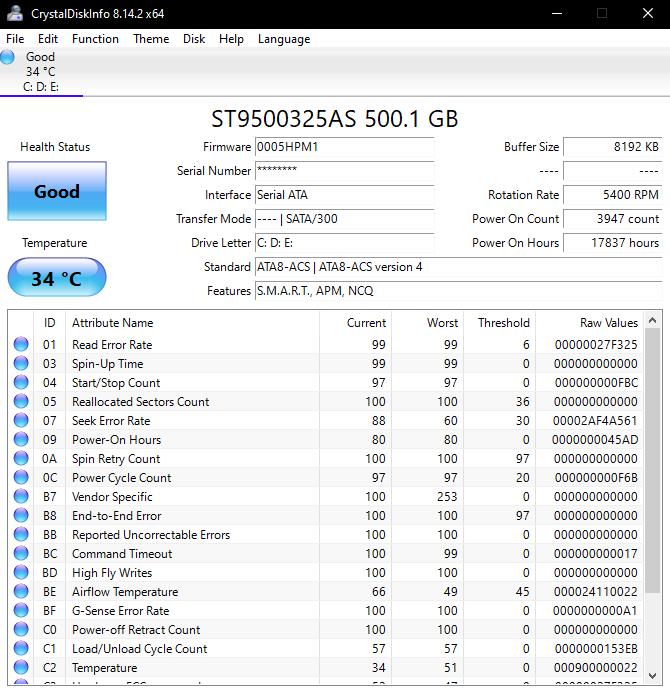 had any bsod since turning fast startup off?

Try running memtest86 on each of your ram stick, up to 4 passes. Only error count you want is 0, any higher could be cause of the BSOD. Remove/replace ram sticks with errors.

if it hasn't crashed, it could be the work around is enough.
0
C

So far so good. Four startups without a BSOD where it was doing it every time before. I'm hoping that did the trick, and that we're in the clear now. Thanks again for your help. :]
Reactions: Colif
0
C

So I just had a BSOD while in session, so that seems to be back. Unsure if it'll be connected to the startup BSOD or not so I decided to post again here rather than make a new topic. Here's the dump. For reference it was generally happening shortly after I'd close a browser, but not always. This was one of those times.

Edit:
And it happened again about four and a half hours later. Added it to the drive as well.

since turning fast startup off is just a work around for older drivers that don't like win 10, it seems we need to figure out which it might be.

I already mentioned the top AMD driver, but its possibly one of the non AMD drivers. Not sure you need Overdrive.
I will wait and see if BSOD tells us anything.

I might delete your new thread since its just this one again. Better to keep it in one place

which HP Pavilion G6 is it as there are a few models?
0
C

No worries. The only reason I made the new thread was because this was marked as solved, so I wasn't sure anyone would peek inside even with new posts. :]

So should I be trying to delete, disable, or update those drivers?
0

I ran the dump files through the debugger and got the following information: https://jsfiddle.net/sac37ypq/show This link is for anyone wanting to help. You do not have to view it. It is safe to "run the fiddle" as the page asks.

This information can be used by others to help you. Someone else will post with more information. Please wait for additional answers. Good luck.
0

https://support.hp.com/ca-en/drivers/selfservice/hp-pavilion-g6-notebook-pc-series/5186811/model/5273866
I can see your WiFi drivers are newer than what is on HP website.
same goes for IDT sound. searching for it on web shows other people having problems with it.
age of device itself is one of reasons the drivers are a problem, most of these are for win 8. Windows has changed since then.

given victim of all 3 is Brave browser, I could guess its the internet drivers
the text of the actual crashes is vague.

Before I go on, do you use WIFI or Ethernet? your WIFI drivers are old but Ethernet drivers are from last year.

if you use WIFI the next bit applies

hmm, second PC today who used mediatek chips and has BSOD.
I have a really strong feeling I won't find win 10 drivers for this Wireless
802.11b/g/n WLAN
hard enough figuring out which mediatek chips it has.

if you do use WiFi, try using a cable if you can.

If you already using a cable, download Win10 Auto Installation Program (NDIS) from under windows header here as there are newer drivers - https://www.realtek.com/en/component/zoo/category/network-interface-controllers-10-100-1000m-gigabit-ethernet-pci-express-software
0
C

I use Wifi. But I've wired up now. So I'm guessing it's a wait and see game now?

Do I need to disable anything on my laptop while using the ethernet cable to confirm it's the wifi adapters?
0

Not using WIFI should be enough to not get the errors. If they are the cause.
drivers are still there but shouldn't be active.
if you use the cable it should use the realtek drivers

just to be sure, you can run this and stop them running at startup. It doesn't however stop them running completely so if something else decides to use WIFI, they can be loaded
https://docs.microsoft.com/en-us/sysinternals/downloads/autoruns
I believe you can use program to remove drivers but I am unsure if windows might just reload them next startup since wifi built in.
0
C

So it crashed with the ethernet plugged in. I downloaded the autorun but I'm not sure how/where the wifi stuff is to to disable them. (I have to say this is likely the most BSOD's I've ever had in one day.)

I did grab the dump in case you wanted to check it.
https://drive.google.com/drive/folders/1Rkgz-80gDcIu3icpLZA6G9oce2U1FE_c?usp=sharing
0

i been awake all night, I let Gardenman convert dumps but I think i won't answer until I have more energy.

all the crashes have another thing in common.
they all memory related
we checked drives but not ram?


Colif said:
Try running memtest86 on each of your ram stick, up to 4 passes. Only error count you want is 0, any higher could be cause of the BSOD. Remove/replace ram sticks with errors.

Memtest is created as a bootable USB so that you don’t need windows to run it
Click to expand...

Do that if you haven't already.
0
C

Alrighty I'll give that a try.

No problem. Go get some sleep, and thanks again for all the help. I appreciate you. haha.
0

I ran the dump file through the debugger and got the following information: https://jsfiddle.net/qrck90fo/show This link is for anyone wanting to help. You do not have to view it. It is safe to "run the fiddle" as the page asks.

This information can be used by others to help you. Someone else will post with more information. Please wait for additional answers. Good luck.
0
C

I can't for the life of me figure out how to get memtest to run. Everything tries to point me towards UEFI settings/booting and I don't have those options, I'm assuming because my laptop is older. And I can't find anything in the BIOS/booting menu's to load it from the USB.

Edit: I realized I'm dumb and needed the v4 version and everything but still no dice. I can't seem to find a way to get the 'boot from usb' setting to appear I'm just stuck.
Last edited: Jan 30, 2022
You must log in or register to reply here.
Share:
Facebook Twitter Reddit Tumblr WhatsApp Email Link