Alright, you guys might already be aware of this news by now. There has been an update on the rumored RTX 2060 12GB gaming card which NVIDIA wants to resurrect in the coming months. Tom’s has already covered this leak before, and I’m pretty sure we will get another article by Zhiye Liu, Aaaron or some other author/editor.

Anyway, Videocardz once again has some confirmation on the rumored specs of this upcoming TURING based GPU, aka the RTX 2060 12GB SKU. According to them this card is going to sport similar CUDA cores as the RTX 2060 SUPER which would be 2176 cores. Strangely, the bus width has been reduced to 192-bit instead (from 256-bit), but the TDP is now set higher at 184 Watts for this new SKU, as compared to the 175 Watt TDP of the SUPER variant.

Very confusing specs to be honest, but let’s hope the GPU is priced reasonably. But given the current GPU market trend, it is highly unlikely this card will sell cheap, at least outside of the US. I mean, we can’t fully ignore Scalpers, and other factors like distribution/logistics, and transportation issues, (despite this GPU having a MINING hash rate limiter).

I know Nvidia is sort of resurrecting this SKU, since it was cheaper to fab this 12nm chip, but global shortage issues are still not stable till now. But at least they can make these cards in more quantities now, hopefully, but I digress. Releasing this SKU isn’t going to solve the global supply/demand issue though, and I don’t think many gamers would be interested in buying a previous gen GPU based on the TURING arch, instead of AMPERE.

But something is better than nothing I suppose ? /s

I desperately want to buy/upgrade a new GPU for my rig, so I will keep an eye on the market trend. To be honest, I’m not that much optimistic with the release of this new SKU to the gaming market. I'm guessing the card's performance should be similar in the same ballpark as the RTX SUPER, if not lower. And the SUPER variant was already 12-15% faster than the RTX 2060 6GB variant, so this new 12GB should be slightly faster.

News Source: Videocardz. Take this leak with some grain of salt though, since we don't have an official confirmation from NVIDIA yet.
Last edited: Nov 27, 2021
0

And I bet it'll only cost $1000
Reactions: Metal Messiah., spentshells and Nemesia
0

If we add some of he AIB custom model price, then this SKU might cost even more. I don't think Nvidia will release a reference Model though, imo.
0

The bus width change actually makes a lot of sense, because if you noticed, the RTX 2060 SUPER comes with 8GB of VRAM, meanwhile the regular RTX 2060 comes with 6GB.

What does this mean? This means both GPUs use different versions of the TU106 die with physically different memory configurations on the die itself. the SUPER comes with 8 memory "channels" so to speak, that allows the card to use 8 physical memory ICs. Meanwhile the standard RTX 2060 6GB can only use up to 6 physical memory ICs. It cannot use 8.

So what Nvidia is doing here is actually their only option, first they doubled the VRAM to 12GB, but keep in mind, they are using 2GB ICs instead of 1GB, so the total amount of physical memory chips is still six. Next, they used the RTX 2060 Super TU106 die for the extra core count, but then disabled one or two of the 32-bit memory controllers because the six memory chip configuration makes it impossible to use all of the GPU's memory controller output.

What's bizarre though about this configuration, is that we're probably looking at just a 5-8% performance benefit over the standard RTX 2060 instead of 12-15% like on the SUPER like you were saying Metal. Memory bandwidth usually plays a big role in GPU performance these days. Nvidia could have easily just slapped on the 2GB ICs on a standard RTX 2060 and give the 2060 a slightly higher core frequency to achieve those results.
Reactions: Metal Messiah.
0

TechyInAZ said:
What's bizarre though about this configuration, is that we're probably looking at just a 5-8% performance benefit over the standard RTX 2060 instead of 12-15% like on the SUPER like you were saying Metal.
Click to expand...

Yes of course, memory bandwidth makes a difference in gaming. That's why I wrote the card would be "slightly" faster than the 6GB SKU, and not 12-15% though. I wasn't clear enough though, lol.

BTW, don't we also need to take into account Nvidia's delta Color Compression technique as well, which is basically a lossless video compression algorithm used when data is moved to the GPU memory to improve effective bandwidth, if I'm not mistaken ? I suppose Nvidia recently has been using a clever color compression with their latest gen gaming GPUs as well, which effectively increases the "bandwidth" by using the GPU power to reduce the amount of memory bandwidth used.

This has also helped them reduce the memory bus width as well, without sacrificing too much on the performance, but I'm 100% sure about this. Does this really translate in real world gaming performance as well ?

NVIDIA actually pegs the effective increase in memory bandwidth from delta color compression alone at 20%. The difference is of course per-game, as the effectiveness of the tech depends on how well a game sticks to patterns, but 20% is a baseline number for the average, IMO.

It has a bit less bandwidth but it might not going to affect games that much. The situation probably will be similar to 1660S vs 1660ti.
0

Yeah, it also depends on the game as well. Not all games benefit from a higher memory bandwidth, due to Engine limitations. On higher resolution like 4K , sometime memory bandwidth/bus width plays a huge role, but, depending on the game being played though.
Last edited: Nov 29, 2021
0

UPDATE. It is now official.

The previous rumors were indeed true. Nvidia says that various models should become available starting Tuesday, December 7th. The specs for revised Founders Edition GPU are available right here. Do note the slightly higher base clock speed and the slightly increased CUDA cores (2,176 versus 1,920 in the standard RTX 2060). Its specs looks similar to the RTX 2060 Super in some ways.

Luckily, this GPU will be available in both custom AIB and "Founders Edition"/FE reference flavors/models as well. These won't sell cheap though. 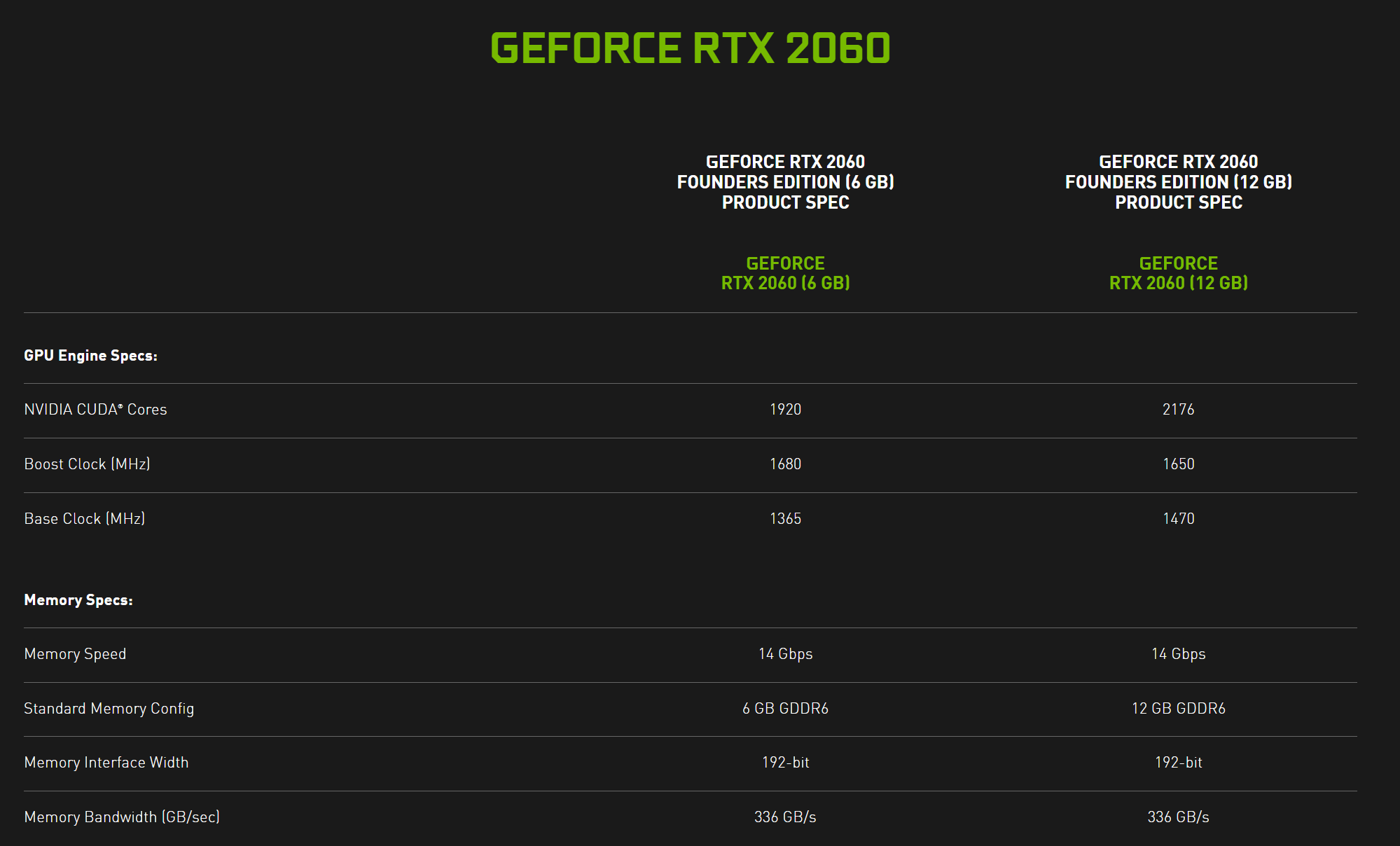