I can run VGA just fine on both NVIDIA & Intel but the minute I connect an HDMI cable to the Monitor & run some intensive processes like Google Drive Sync & stream a Youtube Video, the PC slows down chronically, will freeze, blue screen with Error 41 or DCOM 10010. I don't think it's the HDMI Cables, NVIDIA HDMI cable has a micro HDMI to HDMI port, Intel cable HDMI to HDMI port. Why is it freezing on BOTH the NVIDIA & Intel HDMI Ports? Could it be a faulty Monitor HDMI socket? It worked like a dream for 5 years, started last week.
Spec: Motherboard Asrock Z97 Pro 4, PCIe Display Card NVIDIA GeForce GTX 750 Ti, Intel HD Graphics 4600 on board. Win 8.1.
Refreshed Windows via Recovery CD, updated BIOS, all Win Updates & Drivers checked & up to date, Bitdefender reports no damage, HDD checked, disabled Fast Boot, disabled Power Saving schemes. I'm not a Gamer or Power User. Any advice appreciated.
Last edited: Sep 29, 2020
0
G

Have had to Refresh Windows again, this time bare essentials, chipset driver, no Win Updates. Been digging about DCOM errors, going to try this, MS recommends to say yes... (miss a couple of heartbeats). DCOM Event ID 10010
So strange how BOTH HDMI display ports cause DCOM errors & lagging. HW or SW?? Will try a malware & disk clean, my social media was hacked same time? If it persists I will remove the NVIDIA card totally, error still occurs even if disabled.
Last edited: Oct 4, 2020
0
G

Wow, I can't believe this!! I spent 3 weeks doing research nearly 24/7, I think I may know the answer to my problem! Used a free HWiNFO64 hardware monitor tool, CPU Temps late 90's into 104 Degrees, CPU's throttling to keep cool!! Then I remembered, I had a crappy PSU!! Bought i7 PC 5yrs ago, 3 yrs ago the PSU socket melted!! Had to be replaced! The Tech replaced it with a Cooler Master RS-500-PCAR-I3 500 psu. Very misleading because the 500 is NOT the wattage, look closely at the photo, Max Output 360W for 12V, modern HW is heavily reliant on 12v, an i7 CPU & NVIDIA HDMI GPU will draw most of it's power from there! In small print it states total V output shall not exceed 427.9W!! Outdated & Poor Quality PSU explains why I can't use powered HDMI display ports, the lagging, the freezing, blue screen shutdowns! I removed my NVIDIA GPU but symptoms persisted!

I read QUOTE : it lacks PFC (power factor correction), the most basic thing that any power supply of the last 10-15 yrs should have. It fails to meet any of the 80+ efficiency standards. a good PSU should last 10 to 15 yrs. Apparently Cooler Master has a bad reputation for PSU's & according to 2009 - 2012 reviews, it seems to be a very old model. UNQUOTE.

For all the other poor sods like me out there, avoid Cooler Master PSU's like the Plague, & the Techs that install them, lucky for me I don't have Motherboard damage, fingers crossed! 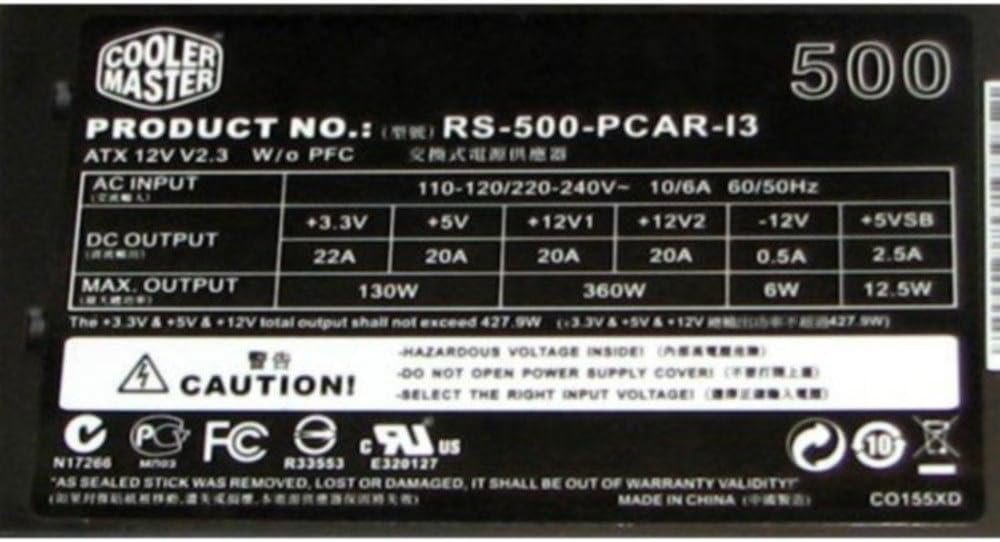 My head is spinning from all the research, I will check the thermal paste on my CPU's as well, apparently it must be replenished when the CPU's overheats! I could not understand this because I'm NOT a Gamer at all, don't put the CPU'S under pressure, yet had severe lagging & blue screening!! Another Tip to cool CPU's in the meantime that worked for me, set CPU MAX to 90% in Power Options:
View: https://www.youtube.com/watch?v=_jIfg7SxppE
0
G