For the last few days I've been having problems with games crashing. Initially I only crashed while playing Path of Exile and the crashes were pretty infrequent. The error in the event viewer was "Display driver nvlddmkm stopped responding and has successfully recovered". Then it got worse and I started having crashes in other games. Now shortly after I turn on any game, the game crashes or I get a black screen and I have to reset my pc. After the first crashes I tried updating my gpu drivers, but then I read that having drivers after 446.14 could cause this problem so I dowgraded and I currently have that driver. After the crashes got worse I tried stress testing my gpu with Kombustor. After about 30 seconds in the test I start getting a lot of artifacts and the same error in the event viewer. Also I recently changed my PSU because my old one was causing my pc to turn off randomly. Not sure if this is relevant though. Does this mean that my gpu is dying or could there be some other problem? Appreciate any help.
My pc specs:
Motherboard: Gigabyte GA-AB350-GAMING 3
Cpu: AMD Ryzen 5 1600X
Graphics card: NVIDIA GeForce GTX 760
Ram: ADATA Premier, DDR4, 8 GB, 2666MHz, CL19
SSD: Western Digital Green 480 GB
PSU: Chieftec Core BBS-600s
OS: Windows 10

Here are the crash dumps: https://drive.google.com/file/d/1FHjlMl6rBie4pQD-xj0tYAD2sQb9yhyV/view?usp=sharing
Also the errors:

If the event originated on another computer, the display information had to be saved with the event.

I already did that, I uninstalled the newest drivers with DDU and installed the 446.14 drivers. What else can i try?
0
R

Now my pc crashed when I turned on a livestream and then I got a black screen with blue artifacts on the windows login screen. And now when I turned on my pc the nvidia control panel doesn't work at all and the gpu doesn't even show up in task manager. Anyone have any suggestions what I can do?
0
S

Hello!
I would say since you have artifacts it's indeed a dying GPU.
0
R

Hello again.
I got a new GPU and I'm still having problems. When I tried benchmarking the new GPU, the screen froze with artifacts on it and my pc crashed. I've been getting these errors in the event viewer both while using the old card and the new card: 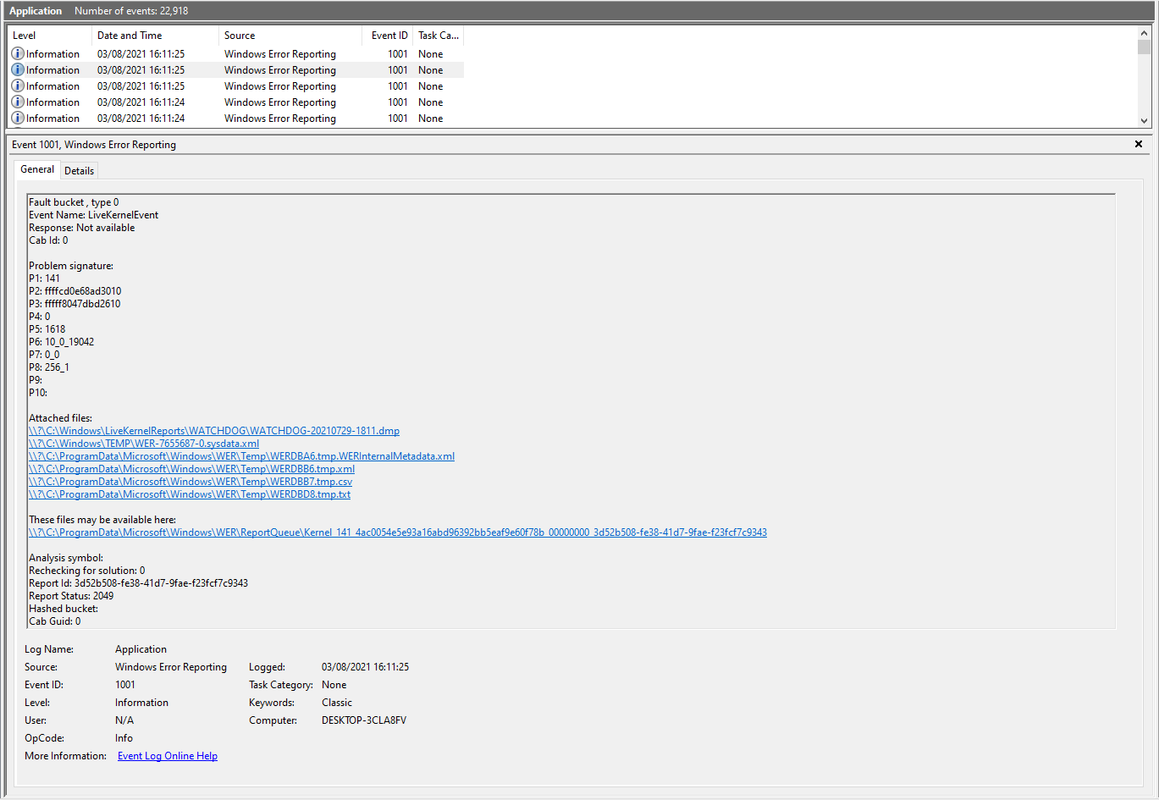 The new GPU is gtx 1060 3GB. Before installing the new card I removed the old drivers using DDU and then installed the newest drivers for the new card. If the problems aren't caused by the graphics card then what else can be causing them? Please help.
Dump file from the latest crash: https://drive.google.com/file/d/1IGHBu_D6m1NYMa82khOFBUJXooPUYzny/view?usp=sharing
0

First of all what is the exact make and model of your PSU?

Since the 1060 is not produced anymore, it's a second hand GPU. Are you sure it was not faulty? Is the guy/store that sold it to you reputable?
0
R

I'm not sure if this is what you want, but the Psu is Chieftec Core BBS-600s 600W 80PLUS GOLD 120MM ATX . And I don't think the new GPU is faulty, especially beacuse it gives the same exact errors as the old one. It would be a big coincidence if both GPUs would be broken in the same way.
0
R

Ok, so uninstalled Nvidia hd audio drivers and did a clean boot. With a clean boot my pc doesn't crash during a benchmark and I can play games without them crashing. I do still get errors in the event viewer though. To me it seems like the problems are caused by some software interference. But what software can cause problems like this? Apprieciate any help.
One new error I got: 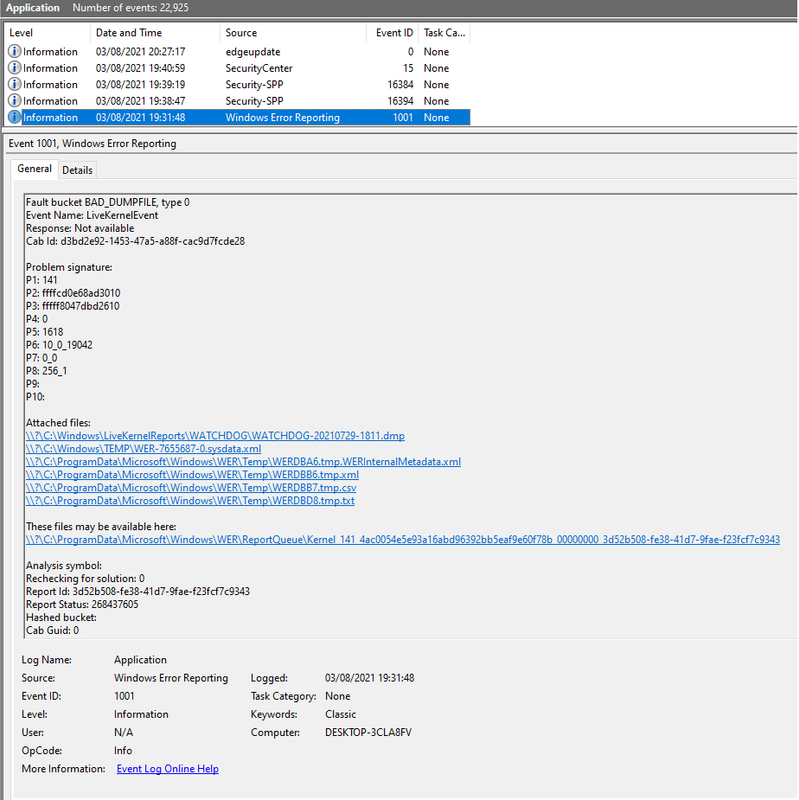 Raimundo15 said:
Ok, so uninstalled Nvidia hd audio drivers and did a clean boot. With a clean boot my pc doesn't crash during a benchmark and I can play games without them crashing. I do still get errors in the event viewer though. To me it seems like the problems are caused by some software interference. But what software can cause problems like this? Apprieciate any help.
One new error I got:

do you have antivirus?
0
R

I do have Malwarebytes, but it's the free version so it's not turned on constantly I think. I tried playing a game with malwarebytes turned on and it didnt't crash. I did get an error in the event viewer while running malwarebytes : "Security Center failed to validate caller with error DC040780". And I'm still getting the LiveKernelEvent errors.
Last edited: Aug 4, 2021
0
K

I already run sfc after the first time my pc crashed. It said that it succesfully fixed some issues. Since then it doesn't find any more issues. I've also already run DISM and chkdsk, the chkdsk didn't find any errors either.
0
R

I tried playing Path of Exile and after an hour the game crashed with the error:

The GPU device instance has been suspended. Use GetDeviceRemovedReason to determine the appropriate action. (GetDeviceRemovedReason: The GPU will not respond to more commands, most likely because of an invalid command passed by the calling application.)
Click to expand...

It's the same error I got before. In the event viewer I had the "Display driver nvlddmkm stopped responding and has successfully recovered" error and these errors at the time of the crash: 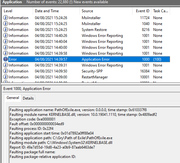 I also keep getting the LiveKernelEvent errors at random times, like this one :

I can play other games without crashing while doing a clean boot.I did get RADAR_PRE_LEAK_WOW64 errors while launching League of Legends and Civilization VI, but I'm not sure if this is important. I also figured out that what caused my pc to crash during benchmarking my new GPU was the Nvidia hd audio driver.
Last edited: Aug 4, 2021
0
R

Yesterday when I turned on my pc, my screen froze with artifacts on it, on the windows login screen, same as with the old gpu. I was able to play Path of Exile for like 3 hours without the game crashing, so maybe at least that is fixed. But not sure what can be causing the pc crashes. I stress tested my new GPU and it didn't crash or create any artifacts, so I don't think the GPU is the problem. Anyone has any ideas?
minidump from the last crash: https://drive.google.com/file/d/17Ew0zCUDWaOYeFNZScq74Ye9xbGEgiDE/view?usp=sharing
Edit: Nevermind about PoE not crashing, after playing it for 1,5 hours, my screen went grey and my sound started sttutering really hard, then after 20 seconds my monitor, mouse and keyboard turned off and I had to reset my pc. Same nvlddmkm errors as before.
Last edited: Aug 6, 2021
0

Are you using any third party software to monitor change fan speed/water temps like GPUZ or CPUZ, I have read these will give that same error. Also I found a post on Nvidia's site that suggests turn off digital vibrance or re-setting it to factory 50% made the problem go away on a few cards.
I will tell you this has been a problem for Nvidia since the 400 series driver versions. Nvidia is denying its their drivers but if you take another video card, NON Nvidia cards may be the answer, check out this thread on Nvidia forums https://www.nvidia.com/en-us/geforce/forums/geforce-graphics-cards/5/283290/nvlddmkm-error-event-id-14/?topicPage=13
You must log in or register to reply here.
Share:
Facebook Twitter Reddit Tumblr WhatsApp Email Link