Previous Next Sort by votes
M

Hello,
I have weird problem with my computer. It started somewhere around begining of 2021 out of no where.
The problem was audio cracking, which started whenever I move my mouse, or press anything on keyboard, when playing audio/games.
I thought that's problem with my Xonar DX. Because I wanted to upgrade it for about a year, I bought SoundBlaster X AE-5.
But problem persisted (not in that huge scale as with Xonar DX).
After that I did complete driver, and than Windows reinstall. Nothing worked.
And now I'm having the same issues, but audio don't freeze for long time, in games sometimes that can be really annoying.
Yesterday I got a bluescreen, in BlueScreenView it shows: 0x01046000 . Problem is with file "ntoskernel.exe".
From this BSOD I have two more problems:
I installed LatencyMon program, and it showed me that:

" Conclusion: Your system appears to be having trouble handling real-time audio and other tasks. You are likely to experience buffer underruns appearing as drop outs, clicks or pops. One or more DPC routines that belong to a driver running in your system appear to be executing for too long. One problem may be related to power management, disable CPU throttling settings in Control Panel and BIOS setup. Check for BIOS updates."

I did all of this above, and nothing helped.

My PC specs:
How to fix that issues?
0

You have latest drivers. Its possible its the Nvidia audio drivers associated with HDMI that are to blame? especially if you use your own sound card.

Try running DDU, remove all traces of Nvidia from the PC and when you go to reinstall them through Geforce experience, do a custom install and untick the HDMI Audio drivers, and see if that makes any difference

How To - How to perform a CLEAN install of your video card drivers.

I did it, and problem is still here
0

try running ddu again, and instead of downloading drivers from Nvidia, run windows update and allow windows 10 to find Nvidia drivers, they will be older than the current ones, might help. Could be older drivers don't cause the problem

if it still occurs
Can you download and run Driverview - http://www.nirsoft.net/utils/driverview.html

All it does is looks at drivers installed; it won't install any (this is intentional as 3rd party driver updaters often get it wrong)

Now its up to you, you can look through the drivers and try to find old drivers, or you can take a screenshot from (and including)Driver name to (and including)Creation date.

upload it to an image sharing website and show link here

All I would do is look at driver versions (or dates if you lucky to have any) to see what might have newer versions.
0
M

DDU with Windows Update driver also didn't work.
Here is my drivers list (some of them are programs drivers, just ingore them): 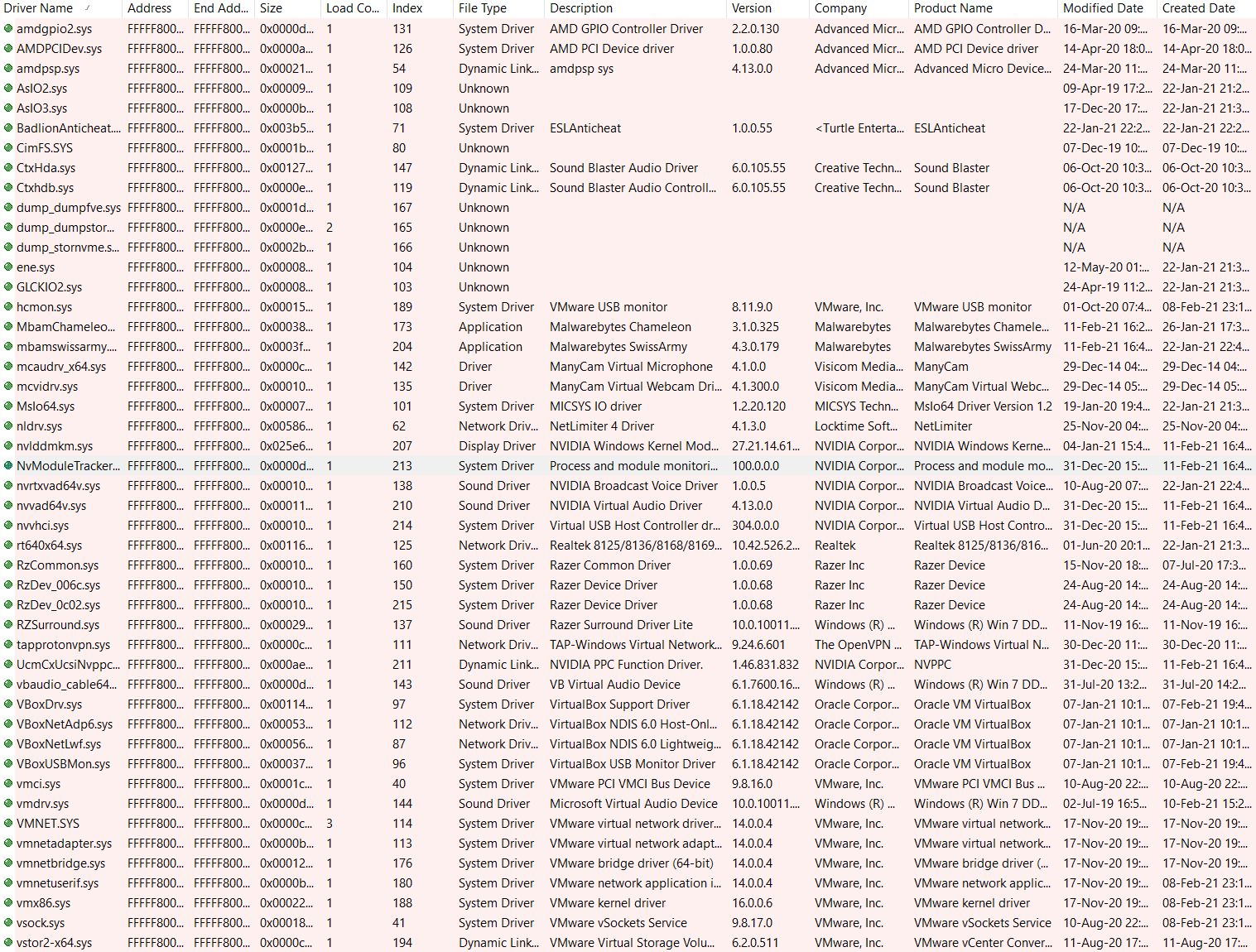 are there any reports that come out of latency.mon?
can you show me a screen shot of the Drivers tab in latencymon?

it likely starts to vary there, how much ram?

in case you get more BSOD
Can you follow option one on the following link - here - and then do this step below: Small memory dumps - Have Windows Create a Small Memory Dump (Minidump) on BSOD - that creates a file in c windows/minidump after the next BSOD

Open Windows File Explorer
Navigate to C:\Windows\Minidump
Copy the mini-dump files out onto your Desktop
Do not use Winzip, use the built in facility in Windows
Select those files on your Desktop, right click them and choose 'Send to' - Compressed (zipped) folder
Upload the zip file to the Cloud (OneDrive, DropBox . . . etc.)
Then post a link here to the zip file, so we can take a look for you . . .
0
M

Ok. Here is the LatencyMon drivers screenshot (only this drivers, others have just zeros):

I have the newest chipset drivers, I installed new versions after reinstalling Windows.

In Minidump fodler I have only one file (I had one BSOD on this Windows installation)
Here is the link: https://drive.google.com/file/d/1SYufnt21h5t0Q1MR4gKLIcu51bit85fm/view?usp=sharing
0

I've unfortunately just ran into the same audio problems and have absolutely no idea how to fix it, it's so frustrating! Hope someone finds a fix for it at some point.
0

Audio actually slightly higher than Nvidia in DPC count, both use DirectX which explains why its 900

I have asked friend to convert BSOD.
0
M

I don't have Realtek drivers installed, I don't use integrated sound card. I use Sound Blaster X AE-5. Also I disabled it in BIOS.
0

and I can't read the chart... i don't know why i thought Audio was above Nvidia on DPC count

i must be tired
0

Hi, I ran the dump file through the debugger and got the following information: https://jsfiddle.net/fhsb8rcp/show This link is for anyone wanting to help. You do not have to view it. It is safe to "run the fiddle" as the page asks.

Possible Motherboard page: https://www.asus.com/us/Motherboards/TUF-GAMING-X570-PLUS/
There is a BIOS update available for your system. You are using version 3001 and the latest is 3405. Wait for additional information before deciding to update or not. Important: Verify that I have linked to the correct motherboard. Updating your BIOS can be risky. Never try it when you might lose power (lightning storms, recent power outages, etc).

This information can be used by others to help you. Someone else will post with more information. Please wait for additional answers. Good luck.
0
M

I uninstalled Software containing this driver, for now there is no audio crack problem, but screen flickering problem persisted.
Also I'm not 100% sure, if this helps permanently, like reinstalling Nvidia/SoundBlaster driver.
I will update my BIOS tomorrow.