I intend to buy an NZXT H710 Case. It comes with 3 x 120mm fans at the front and a 1x140m fan at the rear. I also going to buy an NZXT Kraken X73 AIO which has 3x120mm fans, to install it at the top. So in total, this makes 7 fans. What would be the best fan configuration? This included buying more fans and rearranging the ones I have or any other suggestion? 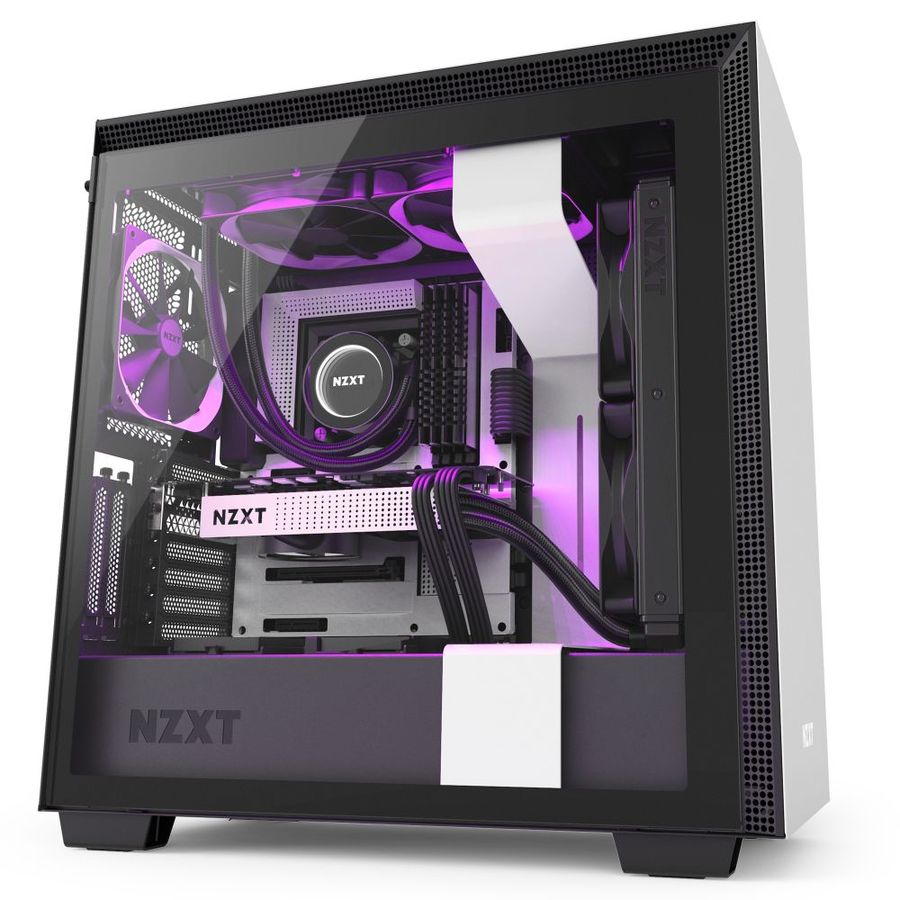 Also is neutral pressure important or can do with negative pressure?
0

It's already 7 fans(4 preinstalled, another 3 off the AIO). All the optional spaces are filled.

I wouldn't think too hard on the positive/neutral/negative pressure thing. It's more complicated than number of fans and whether they're intake/exhaust.
0

If you don't mind me using this same thread, I'm also interested in that H710 (or rather H710i) case. I'm planning on doing a significantly less ambitious build, going with 16 GB 3200 RAM, 2x Samsung 970 Evo Plus M.2 SSD, maybe NZXT B550 or possibly X570S Tomahawk motherboard, 3060 ti (Msi Z Trio or Asus Rog Strix) and 5600X Ryzen. I suppose motherboard and SSD are pretty insignificant here but they have a small effect in thermals too.

So I was wondering, what would be the optimal cooling for this case on this set up, excluding the possibility of custom loop solutions? There's no aftermarket cooler for 3060 ti, sadly if I may add.

Next thing I was thinking off would be throwing in Kraken M22 AIO (single 120mm fan) instead of X73 and then add regular fans like those Aer fans to fill the empty slots.

And third option is to stick a Noctua NH-15D for the CPU and add three Noctua 120mm fans on top for exhaust or alternatively two 140mm Noctuas.

There's no dust filters on top so it's basically impossible to use the top as intake and rely on rear fan alone for exhaust. It kinda sounds like it could work, especially if there'd be two 140mm fans on top of the case, as close to the front as possible. But I'm not sure if I could find a dust filter for H710i's top panel.

Thanks already for the help guys! It's not too late for me to consider another case, but honestly I just like the clean but modern look of the H710i and looks aren't irrelevant (otherwise nobody would ever use any RGB)! Alternative case options would include Fractal Design's Define 7 or Define S2 or maybe even Be Quiet! Silent Base 802 (even though I don't like the last one much and the FD cases aren't as cool as NZXT either).
0

Jussinen said:
Kraken X73 in front of the case for intake
Click to expand...

Won't last as long that way. 360mm and larger AIOs lack flexibility due to their size and short tubing.
After an unknown period of time as a front mount, you will be forced to move it to the top, or remove and replace it entirely, even when the cooler isn't broken. That'd be such a waste.
Over time, the fluid volume slowly decreases and the air volume increases. That air volume starts to pool at the inlet side of the radiator, leading to a potentially annoying trickling, or water running sound.
There's little you can do about that noise once it starts; most AIOs today aren't serviceable and fated to become e-waste at the end of their lives.

That's why I told Reducio8 top mount for that Kraken X73. You ultimately have no choice, unless you're willing to live with replacing the cooler more often.

Please no. That thing is hot trash.
High failure rates tied to it's size and the Pump-In-Radiator design.

There's no dust filters on top so it's basically impossible to use the top as intake and rely on rear fan alone for exhaust. It kinda sounds like it could work, especially if there'd be two 140mm fans on top of the case, as close to the front as possible. But I'm not sure if I could find a dust filter for H710i's top panel.
Click to expand...

Top intake not recommended when most users have gpus that dump their waste heat in the chassis, and fans that were lubricated with oil/grease will wear out faster that way, as the lubrication seeps out when upside down(?).
Reactions: Jussinen
0

Fair enough, thanks for the answers there! But what about that third option, throwing in a Noctua NH-15D for the CPU and then adding three regular fans (or 2x 140mm) on top for exhaust? A simpleton such asmyself would think: "CPU's NH-15 + 3 fans on top are more fans than AIO's 3 fans on top". In some tests (if not all of those that I've seen), NH-15 has outperformed many 3x120mm AIOs and that's without those extra fans that using NH-15 allows you to use.

I'm not an expert, mind you. I'm just interested in options. AIOs are real beauties, but they have to earn their place inside the computer case. Noctuas come with a longer warranty and there's no risk of leaking involved with them. They're not very pretty and they could theoretically harm the motherboard with their massive weight though.
0

Jussinen said:
But what about that third option, throwing in a Noctua NH-15D for the CPU and then adding three regular fans (or 2x 140mm) on top for exhaust?
Click to expand...

It's ok. No real complaints.

This happens because of the fans.
It's a fact that liquid has a greater thermal capacity than air, so in terms of raw performance, liquid > air. Unfortunately, AIOs still depend on air(fans) for cooling, or they would gradually heat up and die faster.
Fans on AIOs typically are faster, louder, and stronger. They need to be, as the air resistance presented by the radiator is greater than that on an air cooler heatsink.
Also consider the panel the radiator is being installed against. Needless to say, the ideal place for the rad is against a mesh panel, so you're not doubling down on the air resistance.
Unlike cpu air coolers, the fans on the AIOs are also chassis fans, and not just for cooling only the cpu. They also aid in cooling the rest of your components.

And that's where we come in and bring them down further, due to our ears. The performance they have over air coolers is there when you run the fans at 100%, or as close to it as possible.
More often than not, that's more doable with air cooler fans than an AIO's, and because most of can't tolerate the louder fans, that causes the gap between air coolers and AIOs to narrow or vanish.
The air coolers have a better balance of performance to noise.

I've used/am using, NH-D15S(dual fan), True Spirit 140 Power, Silver Arrow IB-E Extreme Rev. B, and an Alphacool Eisbaer Aurora 360(replaced the fans, because they sucked) on a lid off 7820X.
Under heavy load, like Cinebench R23, yeah, the Aurora 360 beats the other 3 by a few degrees or more, but it gets loud; the motherboard forces 100% speed when the cpu breaches 80C, IIRC.
When not pushing temperatures quite as high - not triggering the mobo, and running the Aurora at a more comfortable fan curve - the D15S was right there with it.


theoretically harm the motherboard with their massive weight though.
Click to expand...

That was debunked some years ago. More modern coolers fixed that with their mounting hardware, which shares the load over the whole motherboard, which shares with the chassis.
0

Thanks for the thorough explanation! I'm sure that AIO can be a perfectly valid option as there must be a lot of people using them without any problems. Also the case is still better in terms of airflow than most cases, so that should be okay aswell. But I'm happy to hear that AIO is not required. At least it leaves me with an option. Not a cheaper option but an option nontheless.

I may still want to consider some other cases though. It's tough to say what really is enough. Many people say that 5600X doesn't need an aftermarket cooler if one doesn't plan to overclock it heavily. Others complain that even a good custom loop water cooling system is not enough to keep the CPU and GPU temperatures at decent level. I wish that there'd be more computer cases with a clean look like NZXT does, but with better airflow. That being said, if you throw another 100 euros, dollars or something, you can get an airflow-version front and top panel from coldzero. It doesn't look half as cool though.
0

The chassis is up to you. Make sure it's something you like, and you're ok with whatever the ups and downs are, because you will be with it for some time.

It's very situational. The Wraith Stealth included with Ryzen 5 isn't quite as good as the Wraith Prism included with Ryzen 7 & 9 from 3000 on down.
The downside to them is their low thermal capacity. They're ok for the cpu only.
Add a big beefy 300w+ gpu dumping its waste heat inside the chassis into the equation, and the poor little things can get overwhelmed. That's one of the reasons they work for some users and not others.
0

Since you've answered to so many NZXT H710i (and other models) related questions, I'm curious to know if you actually use one yourself. If you do, are you satisfied with it? Is it enough for your CPU and GPU? What coolers do you use to get the air flowing sufficiently?
0

I don't actually use one. I did use a H510 for my mother's PC - it has a Ryzen 2600 and a hand-me-down GTX 560Ti in it. Thermals aren't bad in there because the hardware is 'light'.
I've had a lot of time trying those coolers and a few different fan configs in a Phantom 820, Enthoo 719, and the current H500P Mesh.
When the chassis already offers good airflow, you have more freedom to do what you want with it. The 'best fan config' doesn't matter as much.

I've also made my own conclusions just reading reviews and cooling threads related to the H700 series. Hopefully, some of the above info is useful to the OP.
You must log in or register to reply here.
Share:
Facebook Twitter Reddit Tumblr WhatsApp Email Link