Hi,
I have quite a simple problem and that is I want to synchronize my OneDrive with my computer.
I have a lot of important data on my PC (around 1 TB), this includes photos, videos, documents, programs, projects, etc...
This data I back up on my local drive, two external drives, and OneDrive from a Microsoft 365 Family subscription.
Previously I had to do everything manually, which meant for every file I added, removed, or modified I had to do it in four separate locations which was very time consuming.
Then I found a solution to this, an app called FreeFileSync (that was the best one I could find) where with one click, I could synchronize all changes to the two external drives.
The problem was still the OneDrive. I tried the app, but it's genuinely trash, and none of the other syncing applications I tried worked properly.
FreeFileSync has the option to add Google Drive, an SFTP server, or an FTP server, but no OneDrive and its website said it couldn't be added.
I found one option that could work, and that is adding a network drive to Windows File Explorer and then inserting it into FreeFileSync.
This worked, but then I encountered one last problem, Microsoft OneDrive replaces some symbols with others on the drive and while it doesn't show in the OneDrive client, it does show in Windows File Explorer. This is the article I found on the topic from Microsoft: https://support.microsoft.com/en-us/office/why-has-my-filename-changed-f14307b4-e9ff-4cd9-be79-9524bb323744 . Here is a picture:

This means my syncing app sees these files as different and wants to replace them. It does have some powerful filtering features, but none is able to replace these characters with the ones on my local storage.
What I am looking for is a way for Windows File Explorer not to see these characters as it does now or a better syncing solution for my OneDrive account where with one click (it doesn't have to be automatic) I can just start the sync process and it does everything else in its own.
Thanks!
0

OneDrive handles its own sync. Just turn it on and leave it alone to do what it is supposed to do.
0

ex_bubblehead said:
OneDrive handles its own sync. Just turn it on and leave it alone to do what it is supposed to do.
Click to expand...

Yes, but it has a dedicated folder where it synchronizes the data from the OneDrive to your PC, not the other way around. I have all my data on an internal hard drive, and I only want parts of it synchronized with OneDrive, so I need filters too. Also, my experience with the OneDrive app has been horrible, it has moved all default folders once (like desktop and documents) to the point where no app could make use of it anymore. The app also doesn't let you synchronize specific folders, but you must either put all your files on the desktop or in the documents folder (for which I don't have space on my C drive) or select my hard disk as the default OneDrive folder.
0

One drive is absolutely configurable:

If this isn't good enough then perhaps OneDrive isn't for you.
0

If this isn't good enough then perhaps OneDrive isn't for you.
Click to expand...

The configuration is only for where the files on OneDrive will be downloaded to. I don't have enough space on my C disk for that. There is no option to select a folder on another disk and get it to sync WITH the cloud, not the other way around: 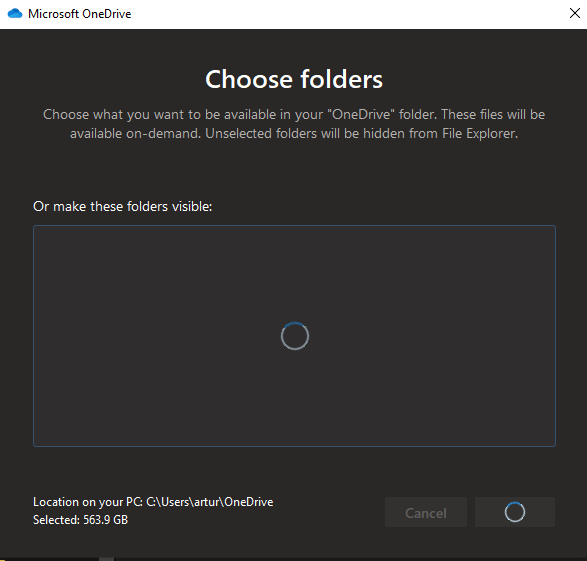 The only backup option is for three non-configurable default windows folders: 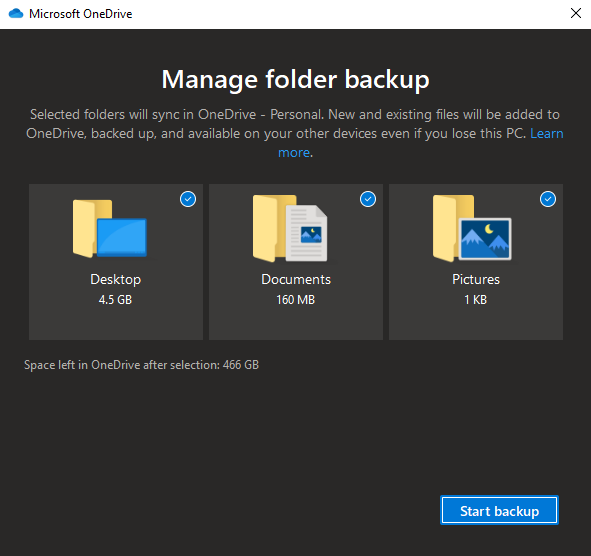 The location I'm trying to synchronize with OneDrive is D:\...
0

If this isn't good enough then perhaps OneDrive isn't for you.
Click to expand...

I came across this thread on the Microsoft support page:
https://answers.microsoft.com/en-us/msoffice/forum/all/syncing-specific-folders-to-onedrive/2d568550-cb25-4220-b28b-17e5b9bc3680
This describes my problem the closest. I'm for sure going to check if the workaround works.
You must log in or register to reply here.
Share:
Facebook Twitter Reddit Tumblr WhatsApp Email Link