Question Optimal settings for an i9-10850k and issues I’m having with the processor.

Hey, so I’m pretty inexperienced when it comes to overclocking and tinkering with CPU settings in the BIOS, but I just have a bit of a question. So I recently picked up an i9-10850k and I’m finding that my cinebench and cpu-z scores are lower than what is reported to be the reference. When I don’t have MCE enabled (it’s set to auto) I’m getting 88 percent for single core and 95 percent for multicore (This is what I’m getting after resetting the cmos as well). When I have MCE fully enabled and turbo enabled I’m getting 101 % on my single core, but 98% on multi core (cpu-z). However, I find that when I take it to cinebench, I’m getting 2000 points less than what it should be. It doesn’t seem like this would be an issue, but my stability is tanking in games. I have a z590 chipset mobo, 32gbs of ddr4 clocked at 3200mhz (Corsair Vengeance sticks with an xmp oc), and solid cooling (temps for the cpu don’t go above 70c under load) but I’m still having issues. Is it just bad silicon; should I enable certain other settings; is it the ram speed/timings? Is this normal for these chips?
0

The performance of the 10850K can vary wildly depending on how it is setup. You will not get anywhere near maximum performance if the turbo power limits are set to their default values. The Intel recommended values are setting PL1=125W, PL2=250W and Time=56 seconds.

For maximum performance, increase PL1 as high as your cooling can manage. I would set both power limits to 300W if my cooling could handle that.

CINEBENCH is a real-world cross platform test suite that evaluates your computer's performance capabilities. CINEBENCH is based on MAXON's award-winn

If the power limits are set appropriately, a 10850K will be able to maintain full speed for this entire test. At default power limit settings, the CPU will throttle during this test. Run HWiNFO and see what Effective Clock data is reported. Click on the Sensors Only option when you run HWiNFO. 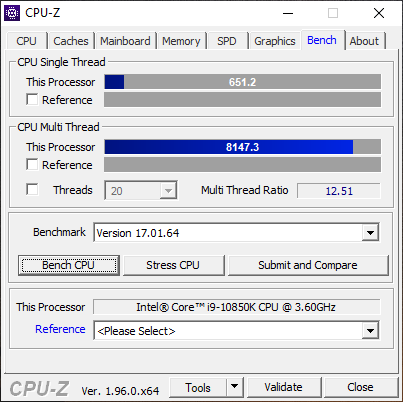 Have you updated the BIOS to the latest available version? Check the motherboard manufacturer's website.
Last edited: Aug 3, 2021
0