Question PC Monitor shuts off randomly or during Benchmarking test - why!

My Son's Monitor randomly shuts off when performing simple benchmark test
https://gpu.userbenchmark.com/Software
I'm thinking it's the Power Supply - is there a way to verify this or i have to actually install a different (w/more Wattage)
Can someone give me a link for a Power Supply at Amazon.ca , hopefully not to expensive and will just be enough power to not cause problem
OR maybe temp related - since I bought it 2nd hand and it's custom built
PC Spec:
CPU: AMD Ryzen 3 3300X 4-Core Processor
CPU Cooler: DeepCool GAMMAXX 400 V2 (Red)
Motherboard: ASRock B450M Pro4
Memory: Corsair Vengeance DDR4 16GB 3200MHz (2 x 8GB)
Storage: 240GB SSD; 1TB HDD GPU: MSI Radeon RX 580 4GB
Case: DeepCool MATREXX 55
Power: 500W
Fans: upHere (from Amazon)
[url=https://postimages.org/] 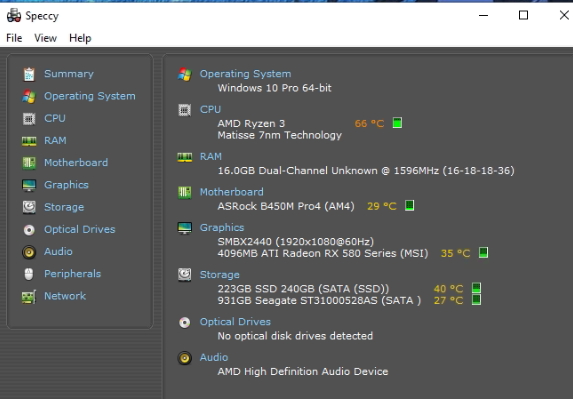 History of heavy use for gaming, video editing, or even bit-mining?

As for purchasing a new PSU - start here:

Use the calculators to determine the computer's power requirements.

History of heavy use for gaming, video editing, or even bit-mining?

As for purchasing a new PSU - start here:

Use the calculators to determine the computer's power requirements.

Consider additional wattage for times of peak use and future growth.
Click to expand...

Here's my Son's PSU - is this sufficient or need a more watts
[url=https://postimages.org/] 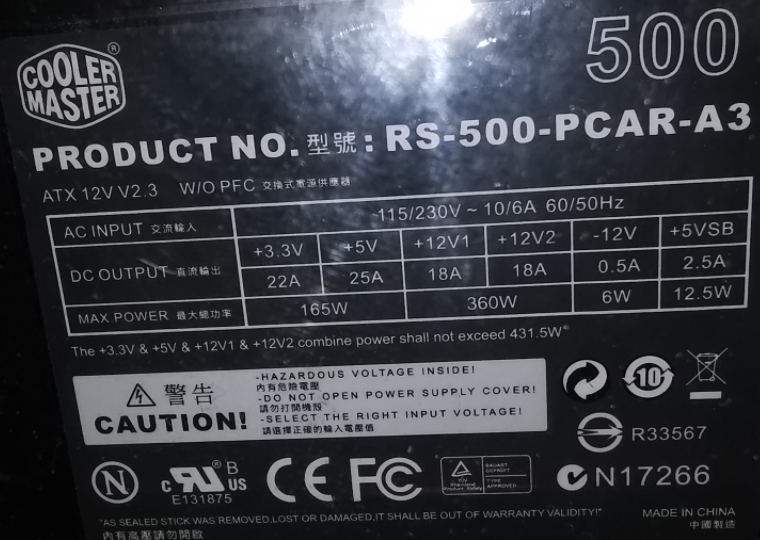 Do use some of the calculators to work out the systems power demands.

If a component lists a power range use the high end wattage value. For GPU's I use the recommended PSU wattage directly. Likely to be a bit high but no harm per se. And, as a rule, I also add in another 25% for extra margin and/or future growth.

In smaller print (but at least noticeable) it reads ".....combine power shall not exceed 431.5W*" Asterick referring, I believe, to the lost of warranty....

Overall, as a PSU ages it loses it abilities to respond to sudden and/or peak power demands in any or all of the supplied voltage rails.

A PSU used for gaming, video editing, bit-mining, or anything else requiring constant high wattages is going to reach its designed in EOL (End of life) even sooner.

Do you have a multi-meter and know how to use it? Or know someone who does?

Not a full test as the PSU is not under load. However, any voltages out of tolerance make the PSU very suspect.

And you can easily find other similar tests.

I believe that the PSU is a likely suspect. However, before going to the effort and expense of installing a new PSU I would try to prove or disprove the PSU being the problem.
Reactions: chris_j11
0
S

chris_j11 said:
i tried a diff monitor w/hdmi
i started the benchmark and after 30sec - the monitor went black for a few secs and then it display the windows logo and we had to log in (possibly it reboot)

Here's my Son's PSU - is this sufficient or need a more watts
[url=https://postimages.org/]

It's a junk PSU. Replace it anyway if it's the culprit or not. Get a decent PSU with LLC on the primary and at least 450w.
https://ca.pcpartpicker.com/product/zdvqqs/evga-b5-550-w-80-bronze-certified-fully-modular-atx-power-supply-220-b5-0550-v1

I assumed it's compatible- thanks
0
C