I bought a new GPU today to replace one of my old ones in my pc. After turning the pc off and installing the new GPU, the pc won't boot. It won't even make a sound. The only thing I see is the ethernet light blinking on and off (even though I haven't connected an ethernet cable to it).
This has happened to me in the past. I solved it by removing the cmos battery and the psu cable and waiting for some time. Then after reinserting them the ethernet light would not blink and by pressing the power button the pc would boot. This won't happen now. No matter how many times I've tried, the yellow ethernet light keeps blinking and the PC won't boot. I've tried removing most pc components like hdds and gpus and ram and the same thing persists, as long as the yellow light is blinking, the pc won't boot.
I'm 95% sure my motherboard is at fault, though I didn't change any other parts other than removing one of my two GPUs and adding a new one. Yes I also tried removing the new gpu and it still won't boot.
The motherboard model is asrock x99m killer. Any ideas? Thanks in advance.
0
J

So I managed to fix it, however I'm having a different problem now.
Checking corsair link and other temperature checking software, I see on my motherboard that one temperature is extremely high.

Any idea what could this be? 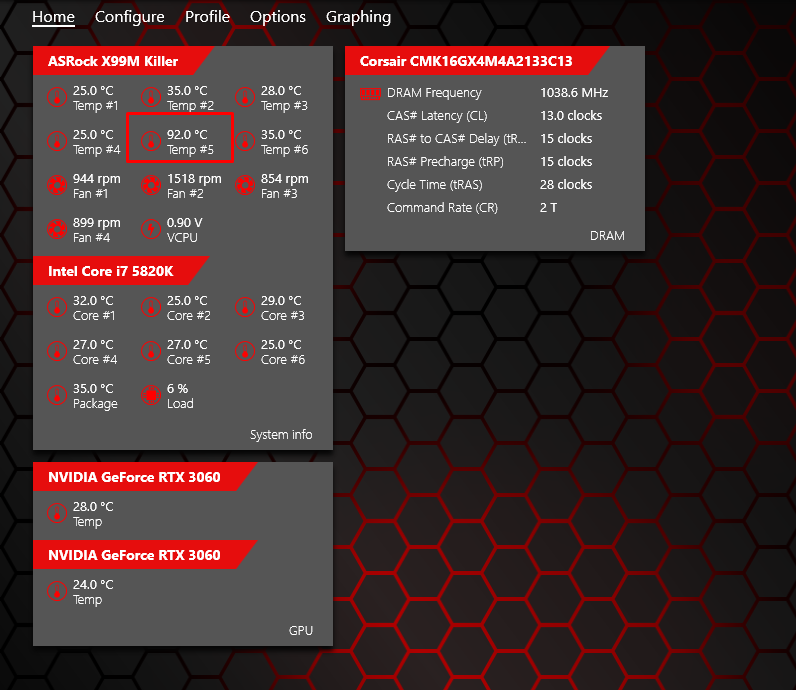 It's always #5 on every software that I use. On OpenHWmonitor both #5 and #6 are flaring up while on corsair link only #5.
0
J

Check with the mobo manual, where is each sensor on the board. With that pin pointed, we can look for a cause and solution

Is this the board?
0

Jacozeelie said:
Check with the mobo manual, where is each sensor on the board. With that pin pointed, we can look for a cause and solution

Yeah that's it, I'm struggling to find the sensors on the manual though.
0
J

Check with the mobo monitor software, if you're lucky, it will display where each sensor is.