Question PC shutting down after ~30 minutes of gaming

Hey guys! I’ve been trying to game on my PC for some time now but it keeps closing by itself after ~30 minutes of playing (namely Hades).

Here are my current specs:


First thought it might be because I hadn’t changed my thermal paste in a long time, so I applied new thermal paste and cleaned the whole thing as much as I could with compressed air and a vacuum cleaner. Sadly the problem persists and here I am asking for help! I used to believe it might have something to do with my graphics card as the shutdown occurs much more commonly when using that instead of the integrated intel graphics, I just find it weird because if it did overheat I would expect it to slow down (drop frames) or something like that. Overall it does not get super hot, so I think that this isn't an overheating issue.
When plugging the hdmi cable to the motherboard and using the intel integrated graphics, the performance is obviously inferior, but it takes a lot more stress for the PC to shutdown (namely playing PC Building Simulator).

I have also deleted and reinstalled the graphics card's drivers to no help.

So what I'm thinking at the moment is that there might be a a problem with the PSU - that when just using the CPU by itself the power is handled fine, but when using the graphics card it is not enough, or something like that.

EDIT: did a UserBenchmark and the graphics card was shown to be underperforming:

what the gpu temp after 20 mins?
test with another psu?

Don't really have access to another PSU, here's the data I got from around 23 minutes of playing - before I did this I adjusted some settingswith MS afterburner - I also noticed that with the new drivers there's a weird faint buzzing/static sound coming out of my speakers when playing the game (stops when closing it)... I don't think that's normal after updating drivers.. right?

Aright! I'll be trying it next thing tomorrow morning - getting pretty late here in Melbourne
0
K

After downclocking it to that speed and putting higher fan settings, the PC shut down after about 42 minutes of overall playing. Here are the settings that were used 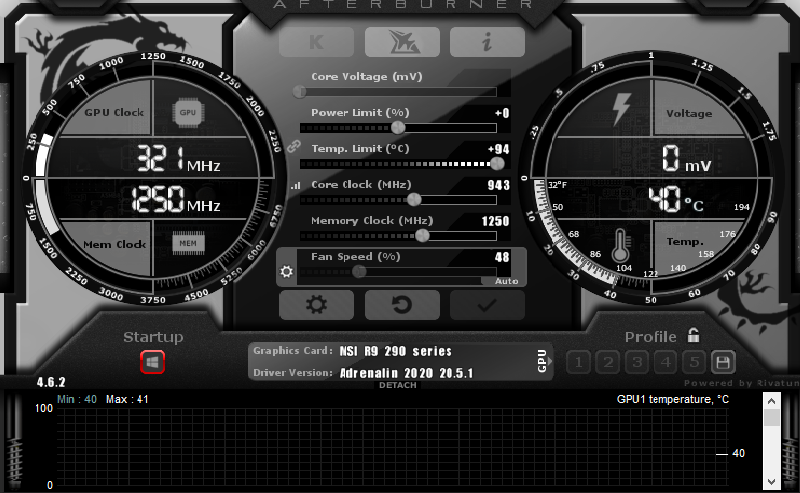