hello
so i have the following questions:

but when i use 2 sticks on A2 and B2 nothing happens,works normal with OC profile to use at a 3000mhz and can use the pc normally

i already did this:


windows ram test with one stick at the time,no errors, i use one stikc on the other slots cant get it to work.
i tested the 2 sticks with memtest86 no problems,i tested both of them one at the time,4 pass no errors.

so the question is: is my MB damaged, i mean those slots are damaged or what?
thank you
0

You should reset the CMOS settings before attempting to run memory in any other slots and it may not run right, if at all, even then. Especially once you enable XMP - or DOCP as Asus calls it.
Last edited: Jan 26, 2021
0

so,basically i cant use my rams on slot 1 and 3? i clear cmos before testing with memtest with no error 4 pass each sticks
if i buy another stick, same model,speed, whats its the order?
1,2,3?
0
D

Blos88 said:
so,basically i cant use my rams on slot 1 and 3? i clear cmos before testing with memtest with no error 4 pass each sticks
if i buy another stick, same model,speed, whats its the order?
1,2,3?
Click to expand...

You probably can use slots 1&3 but only with reduced memory clock speed than with populating just 2&4. Your manual probably has a table showing how that works, it can be complicated since it's going to also be different for other Ryzen processor generations.

Do not run only 3 sticks as that will disable dual-channel operation with a serious ding to performance. Run 4 sticks and it's best that they're purchased in a 4 stick kit. But if you buy anothr 2 stick kit to go with what you have make sure they're exactly the same: mfr, size, speed, timings, voltage. It might work if not, but you also may wind up having to run it at default DDR4 clock speed which is 2133.

EDIT: also, anytime you change memory configuration (adding, changing, moving DIMM's to different slots, whatever) be sure to do a CMOS reset.
Last edited: Jan 26, 2021
0

Dual channel needs two identical stick so anytime you use an odd number of sticks you'll have the problem of disabling it. But if you can't afford otherwise that's all you can do, just be aware that operation won't be optimal. Also be aware you may not find a matching 16GB stick in the future to enable it.

I'm not sure what your useage is but most people get along fine gaming with 16GB so I'd look for a 2x8GB kit and replace the 2x4GB that's in there now. That may mean saving up a bit but it would be worth it, and maybe the shop would consider a trade to help you out.

Also, four sticks in a budget motherboard is really not desireable as that usually results in lower stable memory clock speed. Even if they're perfectly matched.
Last edited: Jan 26, 2021
0

That's how it should be, check your MB's manual.
0

my problems is,my rams are ok but when i install them on A1 and B1 the pc wont start
0

still have problems with slot A1 and B1,dont know why
0
D

Blos88 said:
still have problems with slot A1 and B1,dont know why
Click to expand...

Did you reset CMOS? you have to clear out any previous memory timings or other settings to make the CPU re-train memory to give it a fair chance of working right. Resetting CMOS is the only way to be sure that happens.
0

i did thew following:

reinstall the cooler clean the paste
reset the cmos

installed the rams on slot A1 and B1,keeps restarting and the biols tells me to reconfigure settings

i actgivated the DOC profile keeps restarting
did default settings,the computers boots with the lower speed 2133 on slots 1 and 3
dont know whats the issue
0
D

That sounds normal. Slots 1 and 3 are always electrically sub-obtimal for high DDR4 clock speeds, a side-effect of hanging two unequally terminated stubs off of a tuned transmission line. That's the issue.

Four perfectly matched DIMM's might do better, but you'll have to be content with 2133 if you want to use your mismatched sticks.
Last edited: Jan 28, 2021
0 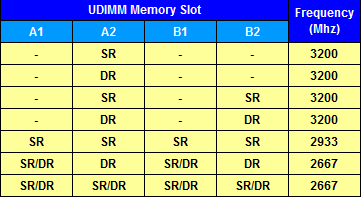 Channel and Rank are not the same thing. Channel is a motherboard thing, it has 2 channels, A and B. Rank is a ram thing, it's how a stick has the little IC chips layed out.

Ryzens are touchy about ram, because it affects the communications between the cores (there's 3-6 actual chips under the lid) using Infinity Fabric. Single Rank is a series setup and works easier with Infinity Fabric, Dual Rank is a parallel setup and the memory controller in the cpu has a slightly harder job dealing with that.

Leaving single/dual channel. AMD has setup A2 as the Primary slot. It's like the fast lane access to the cpu. B2 is its mirror twin on the second channel, but A2 is born first.

A1 and B1 are the runts of the litter. Electrically on most boards they are not exactly up to par. You won't get rated speeds out of the ram in those slots. (see above)

The above is for Matisse (3000) cpus, it's worse for Pinnacle Ridge (2000) series since they have a lower ram threshold and Dual Rank ram/mixed ram in 4 slots can only pull 2133MHz or 2400MHz at best and remain stable.

i dont understand what u said, im sorry

Ram will not function at speeds higher than 2400MHz on your motherboard in slots A1 and B1.

If you use 4x sticks, you will have a very hard time getting ram to be faster than 2400MHz.
0
D

Blos88 said:
....
so i installed again on A2 and B2 and no problems and working at full speed

No reason for a sad face, that's the way it's designed to work.

A1 and B1 (slots 1 and 3) are only made available for users who's application absolutely must have very large memory arrays and are willing to run it at DDR4 stock speeds, 2133-2400, to use it. Those who want very fast (overclocked) speeds will have to be content with a 'normal' amount of memory (can be up to 64Gb now as I think there are 32GB DIMM's) with 2 matched DIMM's in A2 and B2. That way, everybody can find a way to be happy!

so if i buy another stick same model and i install it on slot A1 with the rest its means it will works with the rest of the at lower speed?
0
D

Blos88 said:
so if i buy another stick same model and i install it on slot A1 with the rest its means it will works with the rest of the at lower speed?
Click to expand...

No guarantees, but most likely.
0

Blos88 said:
thats sucks so why the hell i will buy faster ram if the rest of them will work at the lowest
Click to expand...

That's a good question... because there are ways to get more speed if you're willing to work at it.

The most common way people get the overclocked memory speeds is buying fast ram and setting XMP...or DOCP as for ASUS. That's using pre-set timings established by the DIMM mfr that are useful when used in A2-B2, but not usually in A1-B1.

Getting the higher speed the ram is capable of when running 4 sticks often means tweaking the timing values manually. That can be daunting and even then you may not get the rated fast speed (say, 3000) you bought but something less. Like maybe 2933, or 2666. Still, that's faster than 2133 and you also have the huge memory array for your applications that need it.
Last edited: Jan 29, 2021
0

is there much a diference from 3000 to 2666? i have 16gbs wich is ok for gaming for me, and doing GNS3 simulations because im studying networking here,and i always wanted to have lots of rams,i come from 4gbs and less,even mi old i7 2600 did not have problems with 12 gbs ddr3

maybe i will save money for 2 sticks
0
D

maybe i will save money for 2 sticks
Click to expand...

DDR4 is a lot more critical than DDR3 (and I have to imagine DDR5 will be even more so). But also, Ryzen's memory controller seems pickier about memory although it responds much better than Intel to extremely high clock speeds (above 3200 generally). Both are because of how the Infinity Fabric works, or so I've read. Give it the right kind of memory, configured properly, and it rewards with much better performance at higher clock speeds.

2 sticks means you'll get dual channel operation and that's well worth saving for.

And lastly: even in in pure memory-bound operations 2666 to 3000 isn't that great of an improvement and may not be actually appreciated. But it also means infinity fabric is operating at 1500Mhz vs 1333 Mhz and that improves CPU-bound threaded operations accordingly. IF ties the CPU core complexes together, and the core complexes to the I/O dies so speeding that up is pretty good thing to do. But the difference in performance between 2666 and 2133, or even 2400, is massively more and will likely be noticed; I know I do even with my Ryzen 1700 system.

But in the end, any memory no matter how poorly configured is orders of magnitude better than making Windows use it's 'virtual' memory, even if located on an NVME SSD. So if your application demands huge memory arrays, 2133 clock speed is much better than that.
Last edited: Jan 30, 2021
0