Hey all! Just wanted to share what I’ve been trying to do the past few days.

I have two PS3s, one Fat model the other slim. Both died a few years back from YLOD.

I tried fixing the Fat model a few years ago by the then accepted method of reballing the RSX chip (actually just heated it up with a heat gun). That worked. But! I then attempted to delid both the Cell and the RSX; which ended in utter failure... I broke off one of the small SMDs on the RSX.

I never attempted to touch the slim PS3 after, Until now.

I discovered this about a week ago: https://www.psx-place.com/threads/tutorial-nec-tokin-capacitors-replacement-ylod-fix.25260/

I know that thread is about a year old, but the theory is, the reason why PS3s keep failing is not entirely due to the solder balls of the RSX cracking. It is in fact due to one of the NEC/Tokin capacitors failing. Heat just brings them to life temporarily. The solution was to replace them with tantalum caps.

4 tantalums are needed per Tokin. If you replace all caps with tantalums, you would have to solder in a jumper wire. Usually the bottom ones need replacing first.

It made so much sense, as I had an old Toshiba laptop with one of those Tokins and when it stopped working, the PC repair shop just replaced it with tantalums.

So in order to test if that truly is the solution, I bought myself some 330uf tantalum caps, and ripped off the old tokin caps with a flat blade screwdriver.
The only problem is I don’t have a rework station. So I tried to solder them with a regular soldering iron: 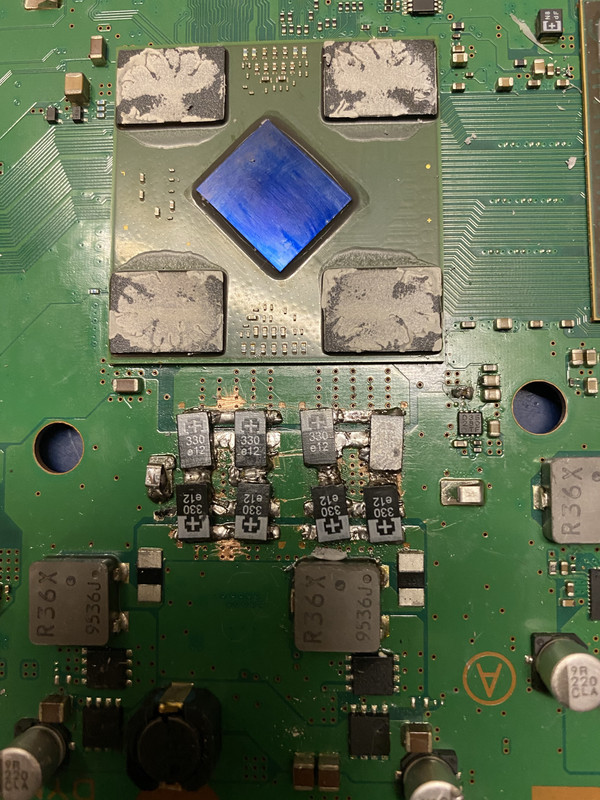 Surprisingly, the PS3 worked. It turned on, and left it at idle for about 30 minutes and it didn’t fail (yet).

I know that the soldering might just be the worst in the world! I just did that to see if it would actually work, and just buy the rework station and do it properly if it did work.
And, I also misread the thread at psx-place. They said to do the bottom caps first; the one where the chips aren’t visible; I did the top ones. Guess I got lucky...

Really such a shame that a lot of people I know just threw these away cause it would just keep failing even after “reflowing” the RSX multiple times... not knowing that we were just zombiefying the caps.

So thats about it, thanks for reading about my little boredom fueled project.

EDIT:
Just a few closer shots of the tantalums: 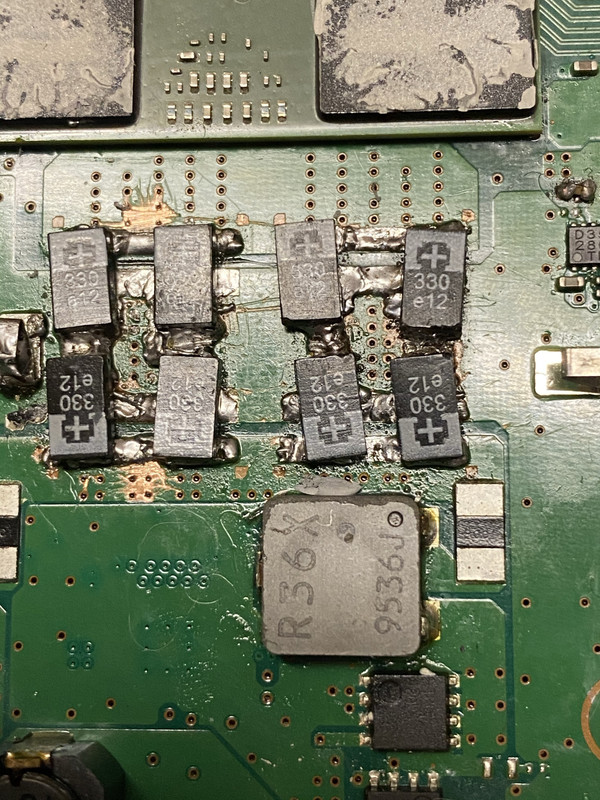 If anyones wondering why I scratched the top and bottom part of the pcb: 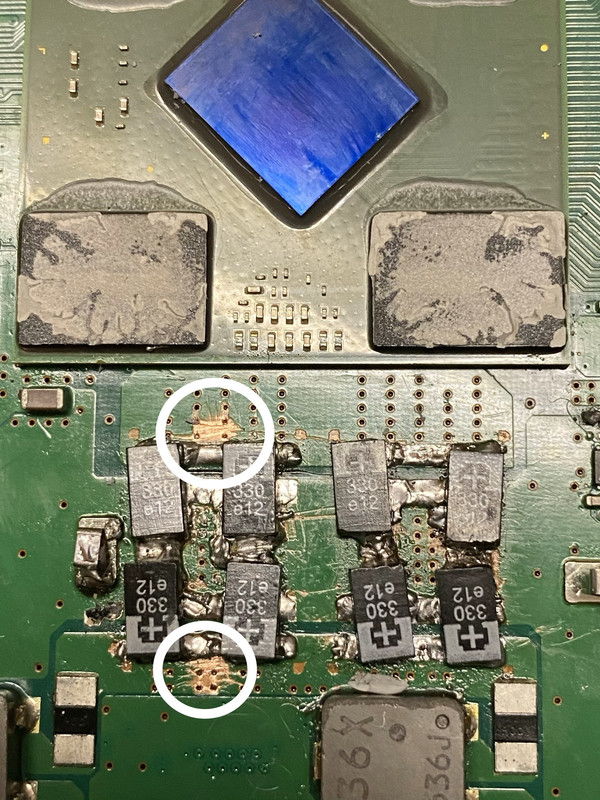 I was supposed to solder on the “jumper wire” there but I remembered that I left the two Tokins on the other side, so it wont be needed yet.
Last edited: Jul 16, 2020
Reactions: boju
J

If you would notice in the picture, you could see that the IHS of the RSX is missing. Well, yes! I delidded the slim! Second time’s the charm! 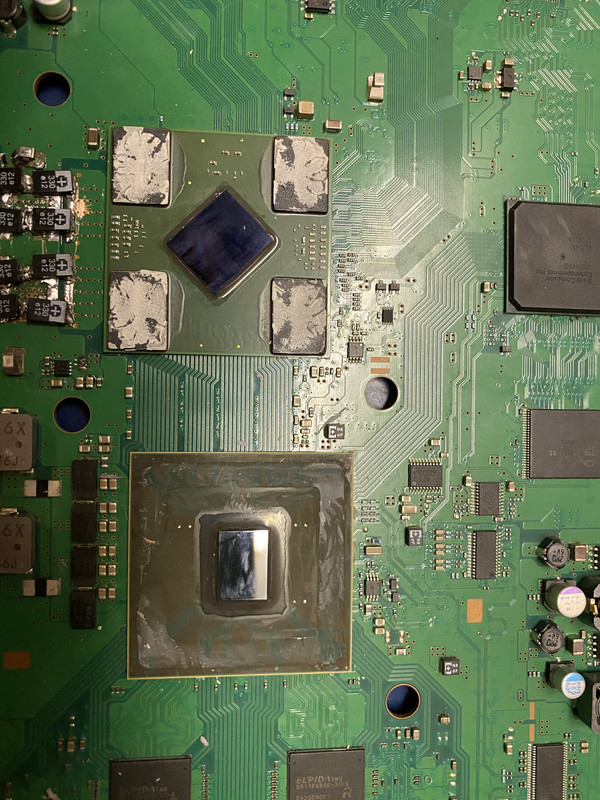 I don’t know if it’s courage or just straight up stupidity to attempt to delid again after what happened to the fat one.

The thought of losing it less than an hour after fixing it made me nervous, my hands were actually shaking. Had to take a shot, or two to “settle down” a bit .

For the RSX, I used a blow dryer to loosen the glue a bit before inserting a sharp blade on the top right memory chip, then slicing until it pops up a bit. Then you could lift it up.

The Cell was a bit harder, you need to cut around it to remove the silicone. My first attempt with the fat one was with the blade. But I have gotten smarter now, I used a nail file with the end bent and I also sanded it down to be as thin as possible: 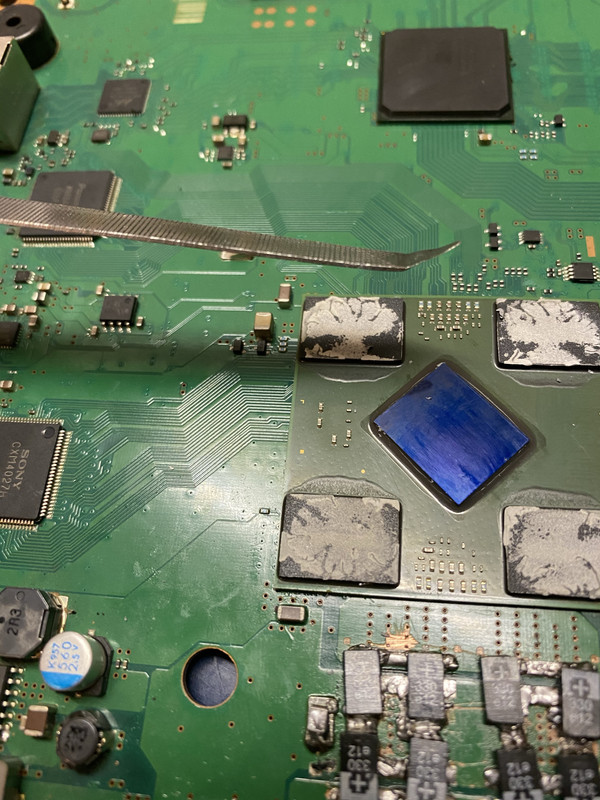 I inserted my file in the small gap where there isn’t any silicone and started slicing clockwise.

Also notice that I had scratched the pcb of the cpu: 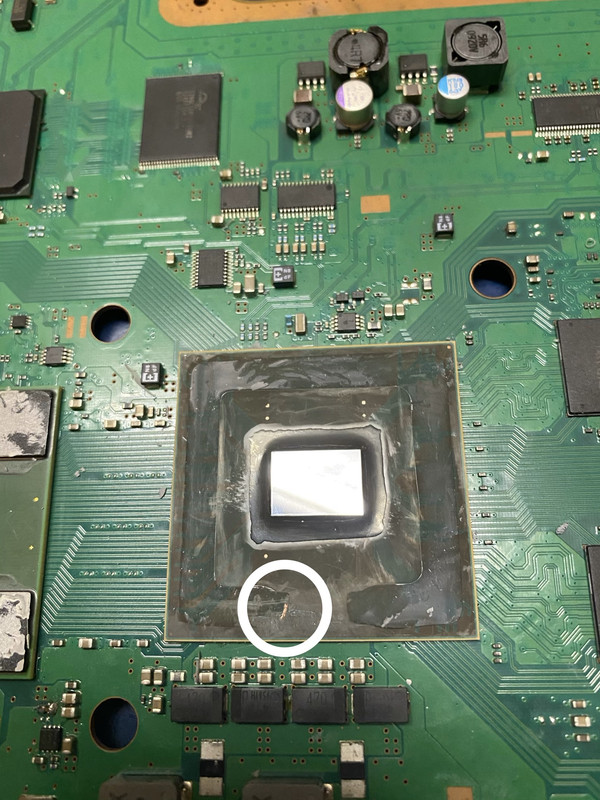 But fortunately, there were no traces in the area I scratched. Perhaps if I made the tip of my tool thinner it would have slid much more smoothly. Practice makes perfect I guess.

One last thing, I noticed that an smd was knocked off in the board, its as small as the ones in the RSX: 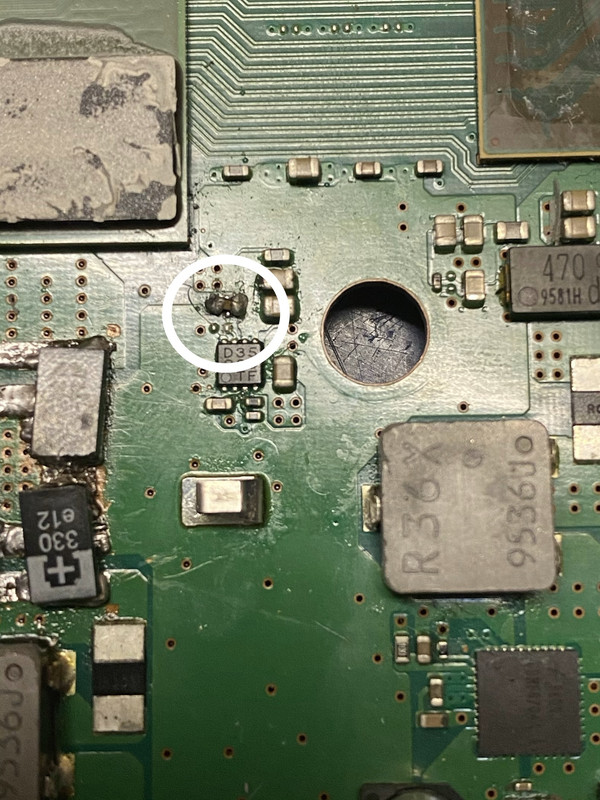 I was able to solder it back on with my soldering iron. Something I would do properly once the rework station arrives.

Sorry if the images are blurred, I’m taking all of this from my phone, and am currently posting from it.
J

Oh yeah, I tried soldering the small smds of the fat PS3 back on, but I really just can’t. Really can’t wait till the rework station arrives, will attempt it then: 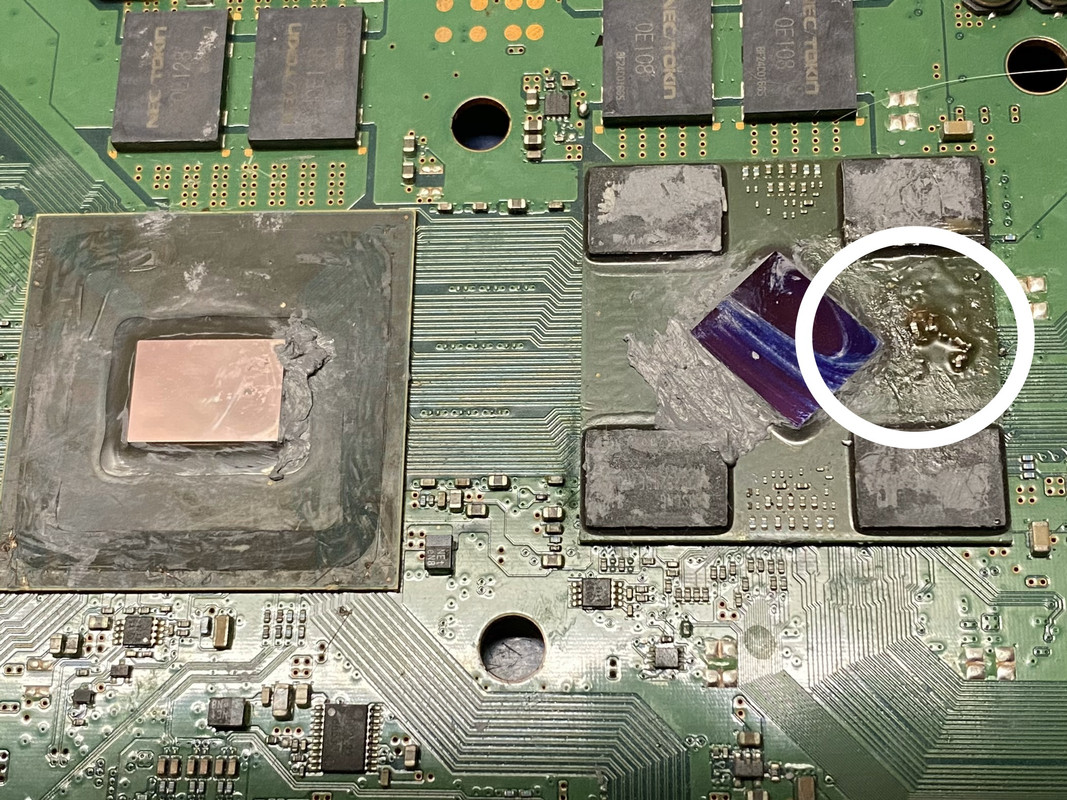 The slimy looking liquid is flux. The solder pad is just too small.

On another note, I noticed that the RSX chips have a blue tint (purple for the fat). Is that normal? The cpu of the fat also has a copper tint, while the slim is just... normal.