So I bought a 6tb hhd around 6 months ago, specifically this model WD Red 6TB 60EFAX, I'm a bit scared because it makes like a subtle grinding noise when it reads information and sometimes when im transfering or deleting big files (transferring at 30mb from my internet) and deleting 60gb at once, sometimes it hangs for a few seconds and doesn't let me do anything but not windows, smart or anything reported it as a issue, one time while it was "frozen" I went to "my pc" and refreshed with f5 and the disk disappeared from the rest of the pc and the disk showing there and when it "responded" again it showed up again as if nothing happened.

The other two drives don't make any sound but they are not SMR and don't have a "trim" function either.

I did many test and everything points that there is 0 issues with it.
Here is a screenshot of smart: 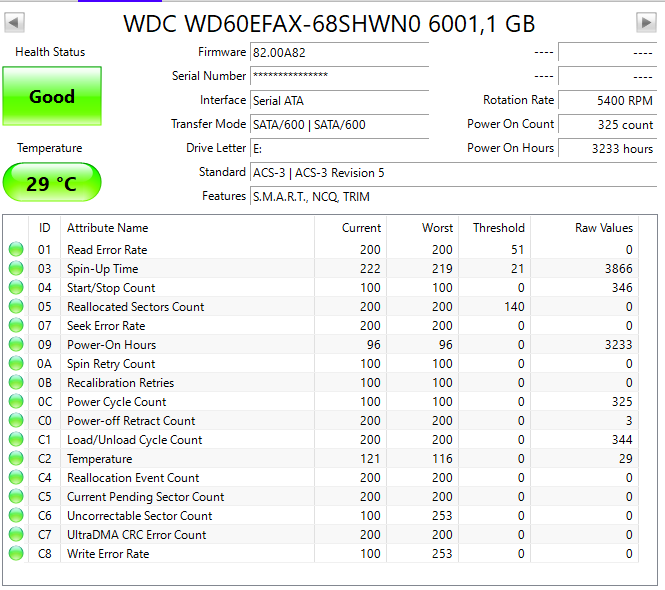 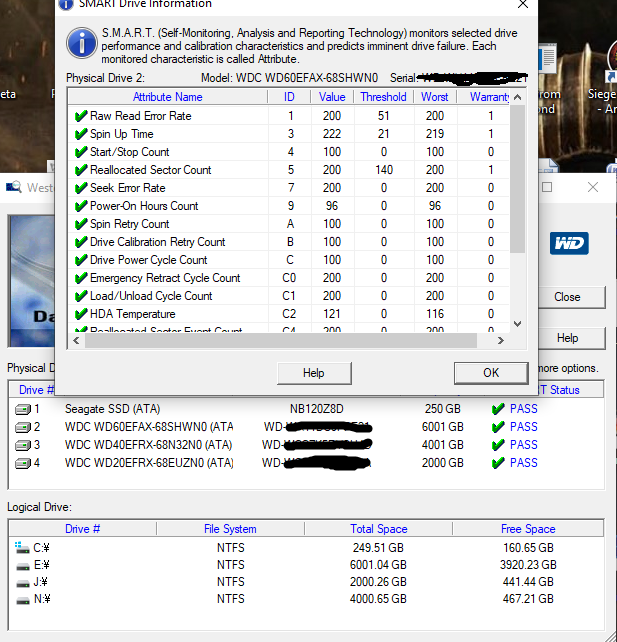 I also run CHKDSK from windows and did the test from western digital dashboard and again it's says the disk is perfectly fine in every aspect.
Here is the thing, when I run WD dashboard it says it has a "trim" function, same as my ssd, but it's not enable at the time, can that be affecting the performance? This is an SMR model (i bought it by mistake) can that be the issue too? 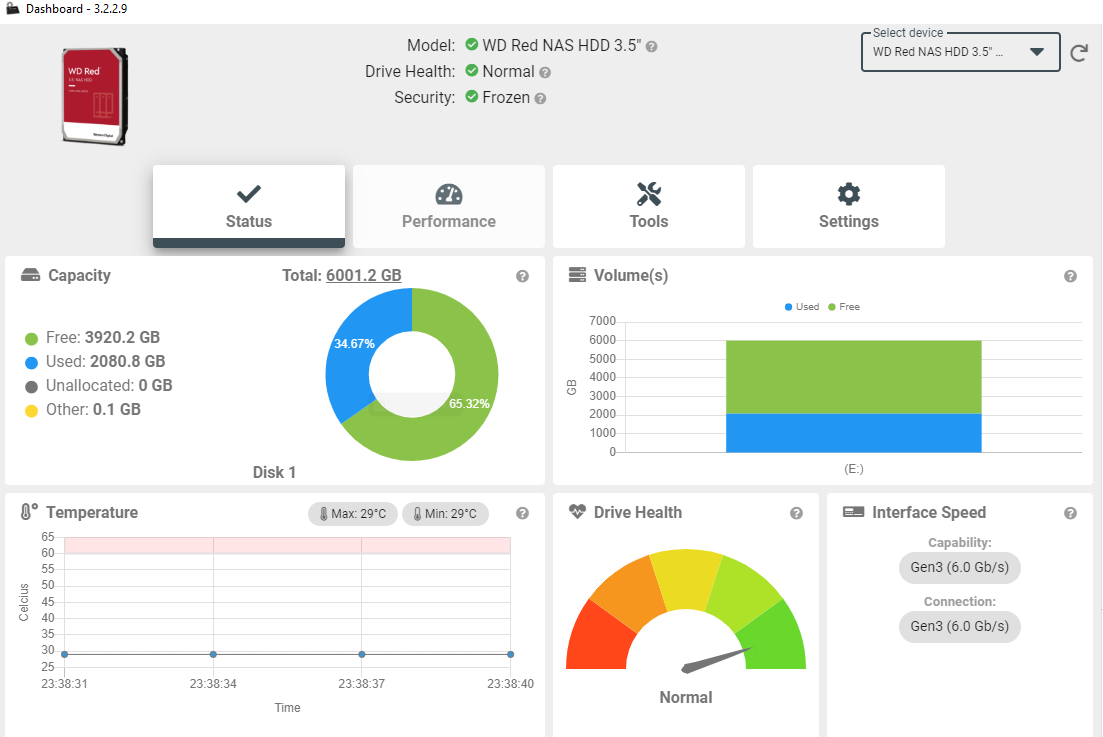 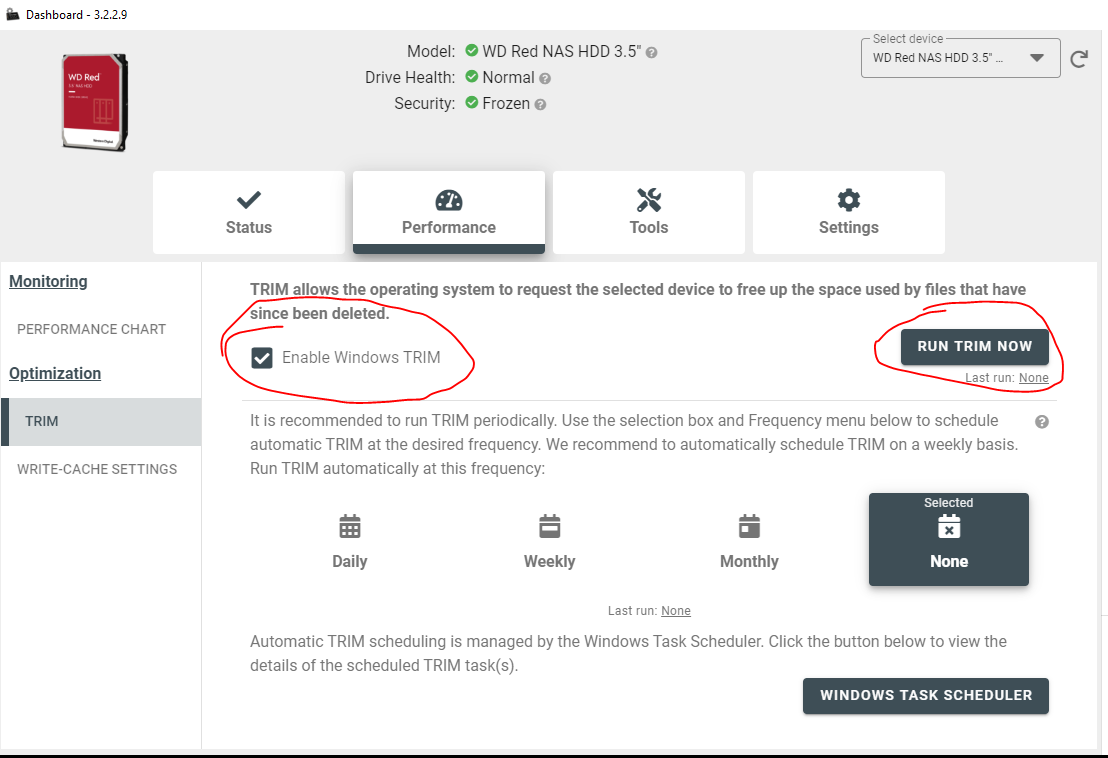 I want to clarify that I don't use my disk for a NAS but as a regular "backup" disk, where I store mostly videos and games (i don't run the games from the disk but store them there)

Finally, windows says this about the disk (weird it's the only one that doesn't say "sata disk device"), some smart software read the drive as an ssd... maybe because it's a new model?

Should I be worried?

The SMR drives may indeed struggle with very large sustained write operations taking much longer than on CMR drives... (long full SMR drive rebuilds were taking up to 10x longer than with CMR drives, 30 hours vs. 3 hours, etc...)

Sorry, unfamiliar with why TRIM is or would be an option showing on your spinning drive, or it's impact if even valid...

Not sure you've really identified any actual problems yet, however...beyond the drive making noise during reads/writes, and, there being hitches in responsiveness during large reads/writes, and the general curse of SMR drives rivaling watching paint dry...(if I am reading it correctly)..

With no actual failures to point to, I doubt anyone will be lining up to eagerly service replacement/RMA requests..
Reactions: raciel1921
0

From what I see, nothing alarming for the moment.

Some large capacity HDD have TRIM command as they use different technology called SMR and the TRIM command does the same thing like on SSD.

So your HDD may or may not have the TRIM command in the support list.
Reactions: raciel1921
0
R

Thanks a lot both of you for your responses, I didn't know smr drives had this type of issues so that grinding noise made me a bit paranoid (is not actually loud or anything but it's there regardless)
I don't mind the slows downs tbh but it's reassuring to know that is not just me, I read on the internet and many users are reporting that these types of drives have this issue, specially the "freezes" when they work with many files at the same time.
When I bought the hdd I thought that the "256mb" of cache sounded really nice and so I got tricked, didn't even know about this whole smr till a few weeks ago and specially not about the issues this technology has, I paid a bit more even for this drive in comparison with a seagate without this "technology".
Thanks again for the replies!
You must log in or register to reply here.
Share:
Facebook Twitter Reddit Tumblr WhatsApp Email Link