Previous Next Sort by votes
Y

Hello everyone, I have run into a problem with my GPU performance, and the fact that I am making a forum post about it means I am truely desperate.

First some background: I have recently dug out my mid-range gaming PC from around 2016 to play some old and newer games. It had not been used in about a year, during which it was dropped from about half a meter onto the floor while moving. Luckily, the damage of this only seemed superficial. However, after reinstalling it onto my desk it would only intermittently turn on. This problem was diagnosed to be a bad motherboard. This was not surprising, the old motherboard was very cheap and the VRMs where poorly cooled. After replacing the motherboard with a used board I ordered online the system appeared to be working again. The current system is as follows:
The problem: I noticed that the FPS in games was much lower than I was used to, at least 50% lower. And in the Assassins Creed Odyssey benchmark I am getting about 12 fps, where I should expect around 40. During this benchmark the CPU usage is about 40%, while the GPU reports 100% usage. The most telling indicator is that in the PassMark GPU test I score 3017, where this card would typically get 6254. The hottest I've seen the card get is around 85C, but looking at the clock speed it is not throttling . Aside from the poor FPS, the system is entirely stable and has not crashed once. 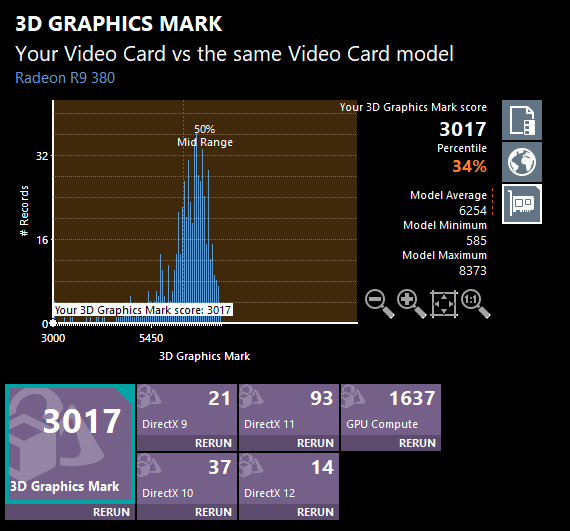 What I've tried so far:
So far nothing appears to have made any significant improvement.

I have no idea what I could try next. From all the testing so far it appears that the graphics card is the culprit, but I don't know any way in which a graphic card can fail without causing crashing/weird artifacts. Any and all help would be greatly appreciated .
0

PSU: 650 W (not sure what model)
650W is the advertised wattage. We're going to need to know the make and model of the unit...alongside it's age.

I have recently dug out my mid-range gaming PC from around 2016
+
CPU: AMD fx-6300
GPU: AMD Radeon R9-380 (MSI, 2GB VRAM)
Motherboard: MSI 970 gaming
+
It had not been used in about a year, during which it was dropped from about half a meter onto the floor while moving.
^ the specs alone don't give much confidence since parts that old tend to die on their own accord, or rather their own heat.

After replacing the motherboard with a used board I ordered online the system appeared to be working again.
Check and see what your current BIOS version is for your motherboard. As for your OS, what are you working with? If you're on Windows 10, what version(not edition) of the OS are you on?
0
Y

Thanks for your reply

The power supply is also from 2016. Knowing the budget I was working on back then I assume its probably not of very high quality. I will look up the part number and check the voltages tomorrow. I think you might be right in suspecting it.

I checked, windows version is 21H2, which it says is the latest version. Not sure what bios version I was running before, but I just updated to the newest version and no change.

Regarding the PSU, I cant find a model number anywhere on it without taking it out, but I measured the GPU voltages while at 100% load and they come in at 11.6V, which I think should still be within tolerance.

Not sure what else I could check :/ If I had another PC I would check the GPU in there but no such luck.
0
Y

I solved it! I tried the GPU in the other PCIe slot on the motherboard and performance is now as it should! Apparantly it is possible for a PCIe slot to fail in such a way that it significantly affects performance, without causing crashing or artifacts. I will try and see if I can fix the broken PCIe slot, because the working one is way too close to the PSU for adequate cooling. So there might be one more follow post detailing what exactly was broken about the PCIe slot that caused this issue.
0
Y

Final update: I checked the old PCIe slot visually but couldn't see anything out of the ordinary. So I sprayed some contact cleaner into it and placed the card back in. And now that slot is working fine too! Must have just been some dirt on one of the contacts. Hope this helps someone out there!