Story:
Shut down my laptop one night, everythings fine, the next day I try to start it again and BIOS said there were no boot devices. Drives still show in the BIOS. I boot the PC via USB to an older windows image on a flash drive and windows says both the NVME m.2 and the secondary HDD are completely unallocated space. I do the best research I can and assume that the data is still there, just the file tables or partitions or something got messed up. I use a program called DMDE, and look for lost files/partitions. Using this on my secondary harddrive, I was able to use the tool "Insert the Partition (Undelete)" and after a quick refresh in windows storage Disk Management, the harddrive was back with all its data. However I've had more complications with the boot drive.

Problem:
the SSD my laptop boots from lost all its partitioning, and I've tried as best I can to restore it. Using DMDE I was able to restore the main Partition that has all the data (C: drive). but being a windows boot drive it has multiple partitions and I'm in over my head and seem to have a problem restoring the rest of it. I'll provide a screenshot of DMDE's window showing the drive: 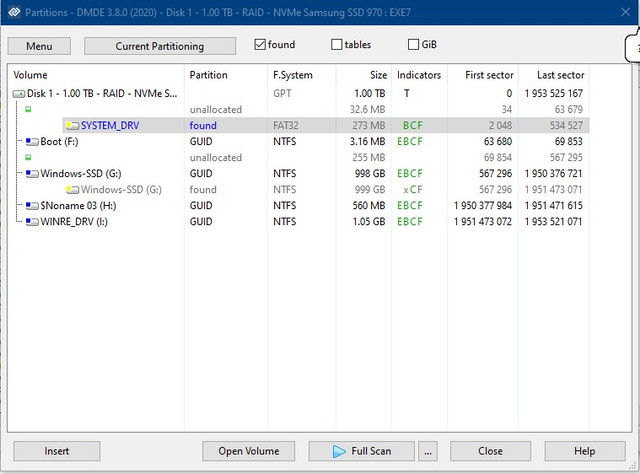 When I try to restore the SYSTEM_DRV partition, it says it overlaps with the BOOT partition (according to the program it looks like SYSTEM_DRV sectors start at 2048 thru 534527, which overlap BOOT's partition sectors of 63,680 thru 69,853. Trying to "insert" either of these causes the other to be removed. Interestingly there is 255mb of unallocated space who's sectors are exactly after the BOOT's starting at 69,854 and going thru 567,295, which makes me wonder if the SYSTEM_DRV is supposed tobe in those sectors? I honestly don't know.

TL;DR:
how can I make this windows drive boot again?

(Yes I know I could just reinstall windows, and transfer over the data I want to keep, and I might do that if I end up having to. but I'd like to salvage this install if possible, because of the headache of trying to redo all the tweaks, settings, program modifications, etc)
0
E

UPDATE: Made the SYSTEM_DRV partitoin (that was FAT32) the "valid" partition (hoping that it contained the BCD boot stuff) and did a deep scan and found a BOOT partition at the end of the sector count (which I think I read was necessary? idk I'm just trying my best here). I tried setting the drive with windows as the "active" drive (tho I think thats for MBR only?) and restarted the PC. at that point I at least finally got a BSOD from windows saying it couldn't boot.

It said it couldn't boot because of a missing Winload.efi in the C:\windows folders. so googling that I was able to look into rebuilding a CBD in that Fat32 partition that, when I looked, had EFI boot folders and a CBD. after trying a bunch ofthings (getting some errors that I think are due to being UEFI and not MBR) for Bootrec, found that it was showing a windows install at e:\windows, and attempted to rebuild a CBD pointing to there. I'm trying to recall all this from memory so sorry its very messy. I used bcdboot e:\windows /l en-us /s k: /f ALL (because I mounted the EFI boot partition to K). during these processess I got a lot of Access denied and a lot more Device not found error messages, that made me think I had completely messed up. BUT

Eventually I restarted and somehow, even tho it didn't seem like it, on the reboot Windows booted, and I could log in?!? But small new problem now, all the partitions I "recovered" from inserting them with DMDE now just show up in windows:

D: drive is the secondary HDD with just data
and theres some messy extra bits of unnallocated space (and tbh the names of the partitions seem wrong) when viewed in Disk Management:

I'd obviously like to fininish this job, and be more assured that the fix is actually...well fixed. Also Disk 0 used to be the NVME with windows, and Disk 1 was the HDD but they've swapped...

Any tips or help on how to clean up the final touches to this all-day mess? or is there something I'm missing I should still fix before I run into more problems? THANKS!
You must log in or register to reply here.
Share:
Facebook Twitter Reddit Tumblr WhatsApp Email Link