I have a problem with my RTX 2060. It's one of those Windforce models, with the quiet fans (0 rpm) at idle thing.

The problem is that the fans will sound like it can't turn on/off, like it's constantly turning on and off.

What i have tried:

I also tried to make a custom fan curve like alot of people with this issue have suggested. It fixed it for now, but the problem were still there, when i used MSI afterburner and set it to 0 % up until 50 c. It would hit 50 c and do the same on/off cycle again. The only way i could make the cycle stop was to do 40 % fan speed. If i'd go lower than 40 % the cycle would start again.

Does anybody have a solution for this problem?
0

Personally, I'd avoid 0RPM outright. You're always going to have a point between on/off... unless you set it low enough to be irrelevant (like 0RPM <20'C, for example). 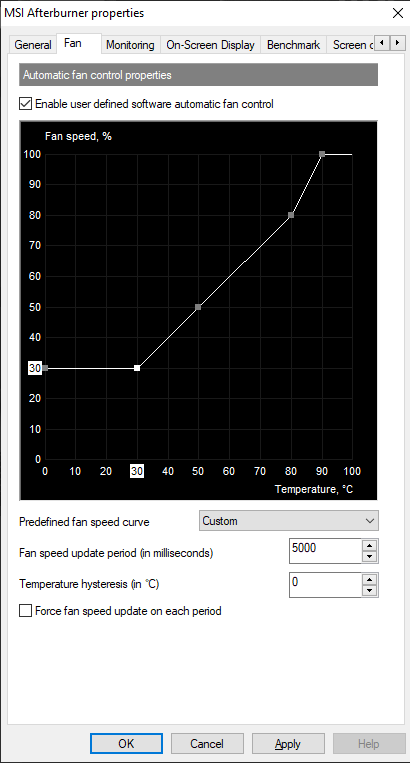 If i understand you correctly then something like this?

Personally, I'd avoid 0RPM outright. You're always going to have a point between on/off... unless you set it low enough to be irrelevant (like 0RPM <20'C, for example).

Well that seems to work! I will test some games etc with this.

It's just weird that Gigabyte (dunno if other brands are the same) allow 0 rpm if it's so audible and weird cycle pattern. Does this setting cost alot of power? I must say the fan on my GPU is barely audible with your settings so i guess it's not that costly, power wise.

Thank you very much for your help though!

0RPM is mostly marketing. Unless you spend your time with your GPU (mostly) dormant.

My 2070Super runs 0RPM while I'm doing work with my system inside Citrix, but I sit at 39'C max in those circumstances. If my ambient were higher, or I had poorer airflow, I'd likely be in the same position you are.

Configured correctly, and in the appropriate circumstances, 0RPM will keep the noise down.
However, with reasonable airflow & a normal number of fans in your case, you're unlikely to notice ~30% RPM in most instances. They can't account for all potential variables (is 49'C idle), but it sure 'sounds' good in marketing...
You must log in or register to reply here.
Share:
Facebook Twitter Reddit Tumblr WhatsApp Email Link