Firstly I have MSI RTX3090 Suprim X graphics card and the rest of the spec is on my sig.

I don't usually update/flash the GPU BIOS(unlike Mobo BIOS) despite my friends telling me to flash the BIOS for higher power limit and better overclock etc. cos I cbf, guess I'm not a hardcore overclocker since I run everything(CPU, GPU, RAM) at stock settings all the time, unless I'm trying to set new personal record on Unigine Superposition bench.

But I was forced to flash the GPU BIOS to enable the "Re-Size BAR" function, I heard it can offer 3-4% performance boost on RTX3090 cards?
So I installed MSI Dragon Centre and use the LiveUpdate option to flash the GPU BIOS.
For some reason it didn't detect any new BIOS with the Scan option, and only detected the new BIOS when I selected the Advanced option. (apparently other people with identical card also didn't get new BIOS when they just clicked on Scan option) 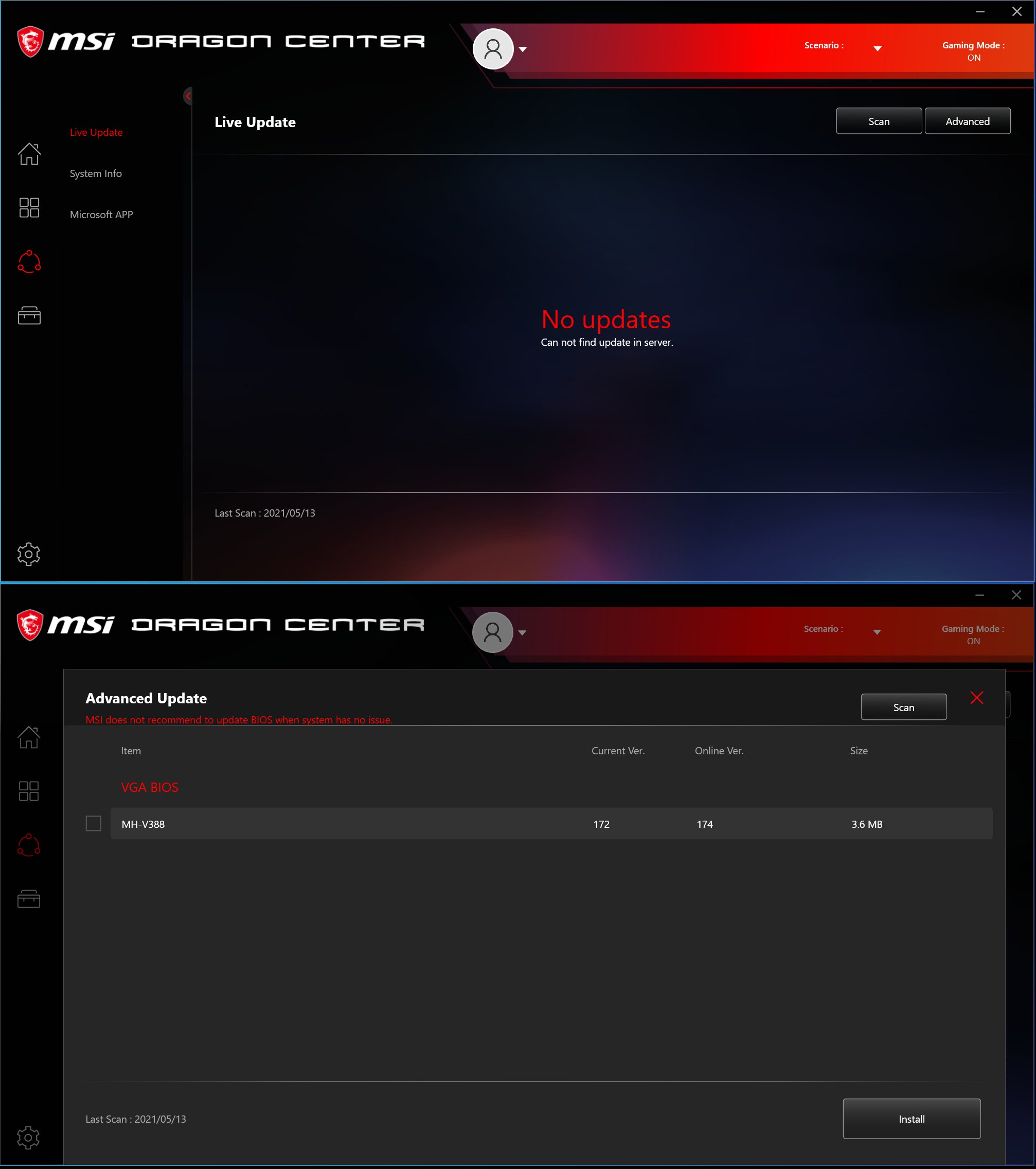 Then I flashed the GPU BIOS(one from Advanced option) following the prompt, also closed all the applications to ensure safe flash(and I'm not running any Anti-Virus program).

It automatically restarted the system after the successful(?) BIOS flash but I wasn't able to get any display anymore. After restart the PC few times with same error, I connected the monitor to the on-board GPU but still couldn't get any display(probably cos cms need to be enabled in the Mobo BIOS?).
So basically I couldn't even go into the Mobo BIOS anymore after flashing the GPU BIOS so I was pretty upset, I would have most likely got the on-board GPU working if I removed the RTX3090 but didn't try.

Luckily I was able to get the RTX3090 working again after talking to few friends. Thankfully Suprim X has dual BIOS(it's got Silent & Gaming switch on the card), so now it works fine if I set it to Silent mode.
But looks like something went wrong during the GPU BIOS update and Gaming BIOS no longer works so obviously I want to permanently fix this annoying problem.
(sorry about the long post, but wanted to provide exact details so people with knowledge/experience can help me properly)


The Solution???
Since my GPU have dual BIOS, I only want to flash the Gaming BIOS especially after what happened.. and keep the Silent BIOS as backup.
i.e. I'm only gonna flash the GPU BIOS with the switch set to Gaming mode on the card, that way I'll still have working card if I set it to Silent mode if something goes wrong.

One friend suggested I should get a second GPU then put it in the first PCI-E slot and put RTX3090(set to Gaming) on the second PCI-E slot. Then use nvflash to re-flash the BIOS.
But would I be able to just use the on-board GPU to start the PC instead then re-flash the RTX3090(set to Gaming) rather using a second GPU? So I don't need to buy another GPU just to flash the RTX3090 BIOS and also saves me the hassle of moving RTX3090 to different PCI-E slot and back.

Or any other suggestions?