Hello All,
TL;DR: Looking for help/guidance from those that have successfully installed a RYUJIN II on if the red circled 9 pin connector should be hooked up to the Motherboard USB2 9 pin header, or if it should be hooked up to the Motherboard 12V PWM 4 pin header as Asus tech support says.
___
Long version
I recently received a RYUJIN II 360 AIO to complete my new build. The wiring schematic in the instructions wasn't completely clear (at least to me since the diagram shows 9 wires on the 9 pin but only 4 are connected in actuality) so I reached out to Asus to ask where the red and blue cables should be plugged into with the assumption that Red would plug into a motherboard USB 2, and Blue would be plugged into a motherboard RBG. Their initial tech support wasn't sure so they escalated it to the engineering team and when getting back to me confirmed that the Blue goes to the RBG of the motherboard, but said that the red circled 9 pin connector actually plugs into a 12V 4 pin PWM on the motherboard, not a USB2.

This concerned me since it was a 9 pin connector and USB would be 5v not 12 after after questioning multiple times Asus continued to confirm it was to be plugged into a 4 pin 12V PWM header on the motherboard.

after plugging everything up and finishing the build, I found the AOI to be dead on arrival. The fans would work if I plugged them directly into the Mother board Fan header, but the Pump and OLED
screen could never work (I believe because these get power from the controller).

Anyway, after researching it seems like many review sites and youtubes seem to suggest that the 9 pin was actually suppose to plug into the USB2 Header on the motherboard

I'm in the process of RMAing my AIO but now I'm a little concerned of if it was DOA or if the controller got fried by plugging it into 12V PWM instead of a USB2. On one hand Asus insists it should go to a 12V header but on the other I see a lot of articles saying USB2, and that seems to make more sense to me since a micro USB comes off the controller to power the pump and OELD (it seems).

I really don't want to fry the replacement as well so was hoping I could ask from some guidance form the community on how successful functioning Ryujin IIs have been wired up in regards to the red circled 9 pin and if they have been plugged into a USB2 motherboard 9 pin, or if they were plugged into the 12V PWM mother board head as Asus says. 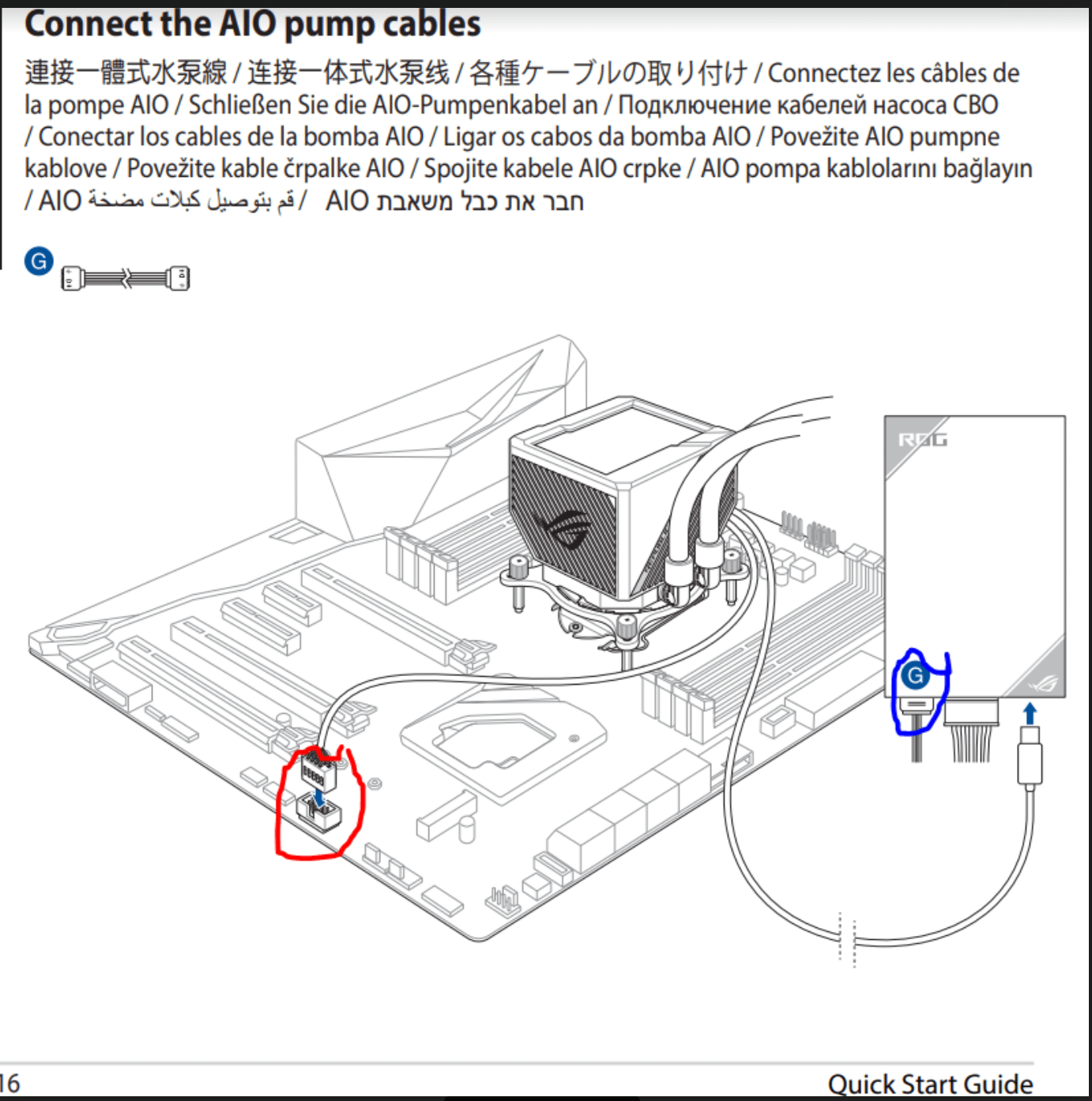 a USB 2.0 cable is not designed to be used in a 4pin PWM header.
you can easily tell the difference between them just by looking.
1
C

I agree this seems like it should go to a USB2 header. I'm hoping to find someone that has installed it that way (to the USB2 header) and is functioning so I can reopen the case with Asus. I'm a bit worried that I get a new unit only to follow Asus's instruction and fry it again, or find something that did install it successfully the way Asus is claiming. I'm also hoping that the AIO controller was the only thing that was damage if it was suppose to go to the USB2 and not my motherboard.

Below is the correspondence I had with Asus for reference, 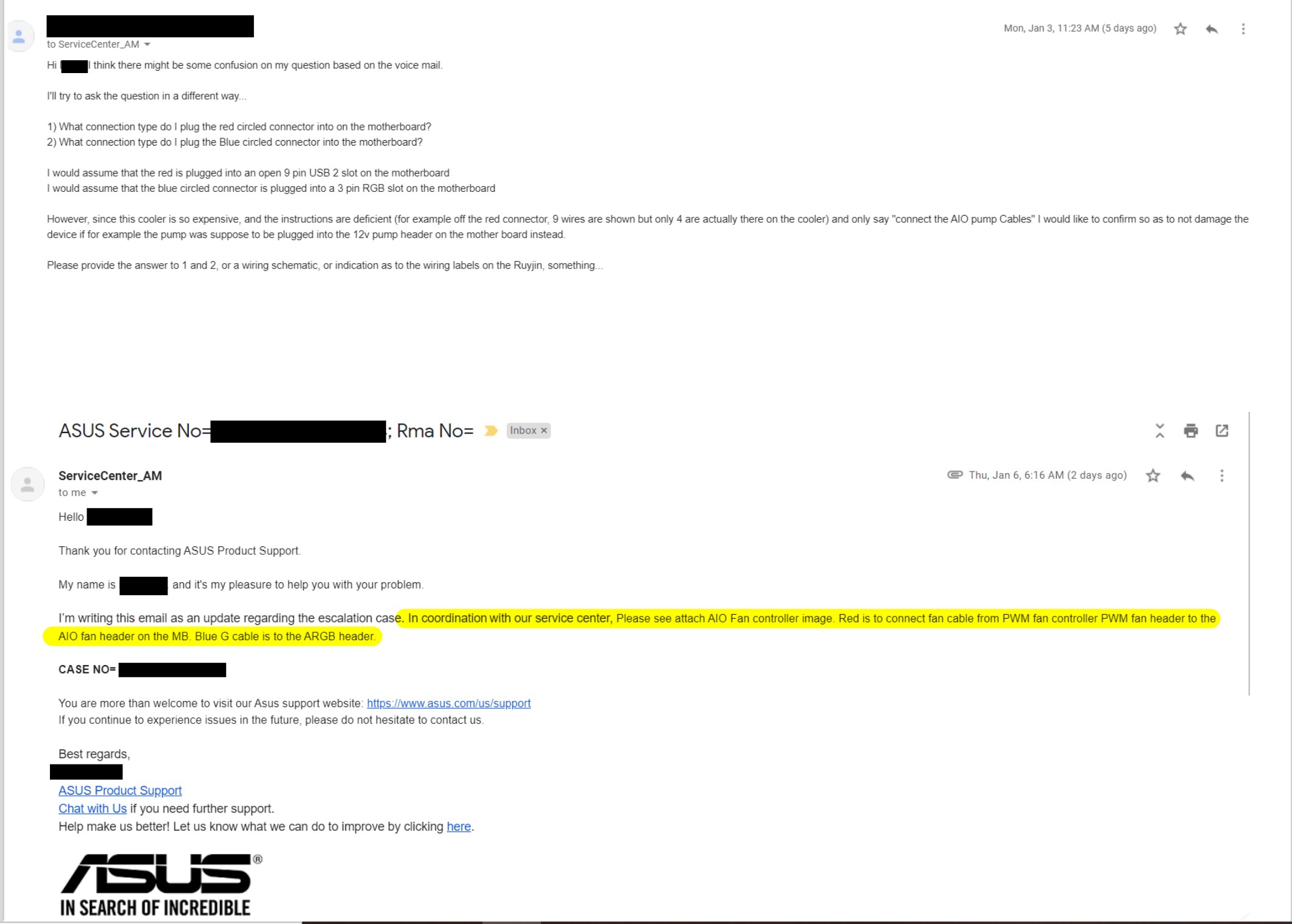 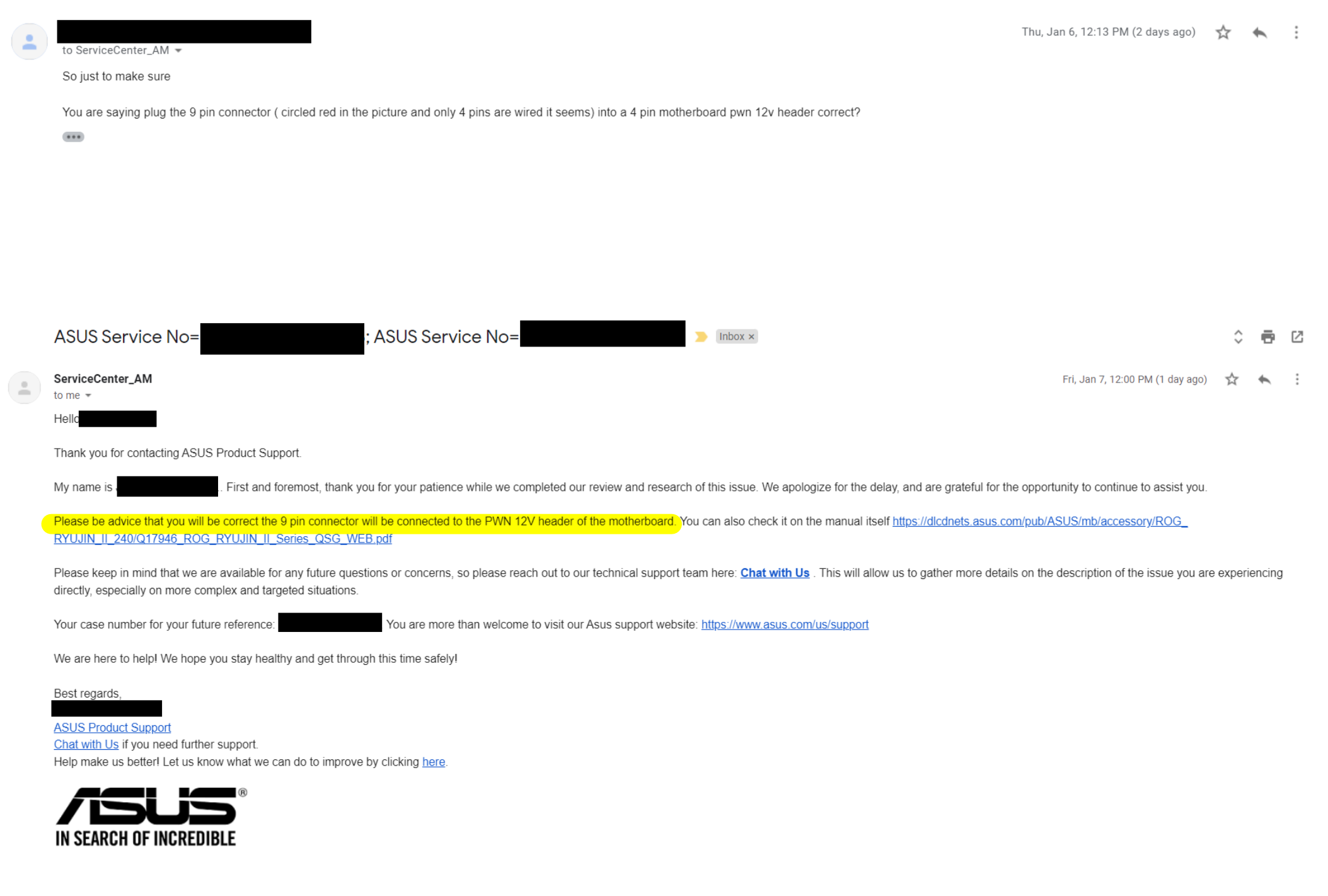 Carbon9000 said:
I'm hoping to find someone that has installed it that way (to the USB2 header) and is functioning so I can reopen the case with Asus.
Click to expand...

a USB 2.0 cable does not go to a PWM header no matter what anyone states.
if it was meant to go to a 4pin SYS_FAN or AIO_PUMP header then it would be a 4pin cable, exactly like a fan cable.
you can clearly see what type the cable is and it is NOT a 4pin cable.
in the included image you can even see that it is a USB 2.0 cable going into a USB 2.0 header circled in red.
you will definitely fry it again if you continue to connect it this way.

maybe you can find a Youtube or similar video of someone unboxing & installing it.
-1
I

Hi. I'm wondering if you got the Ryujin II working correctly, and if so, how did you do it? I'm surprised that no one told you, that to connect the 9-pin jack to the AIO header you would have to rotate the jack by 180 degrees. Then when it's plugged in the + and - polarities are reversed, hence, your finding of dead on arrival. Otherwise, this chat is pretty good. The AIO header is always on full power because the water pump is not going to pump water when the voltage drops. If the pump is connected to a fan header, then as the fans slow down the pump stops pumping water, and your system burns up. The AIO should not make any noise, the noise is usually caused by the radiator placement (or the age of the cooling unit). When the pump is located higher than the radiator then air bubbles stay in the pump, which sloshes air around with water. Air travels to the top location, so the radiator (intake) must be located higher than the pump. Then with age, the water cooler will slowly gain more air in the system. If you use clear tubing, then it will get more air really fast (in 2 or 3 years of use).
0

I_Got_Crabs said:
If the pump is connected to a fan header, then as the fans slow down the pump stops pumping water, and your system burns up.
Click to expand...

if anyone is using a SYS_FAN(or similar) header in place of a 4pin AIO_PUMP header they have to set this fan header @ 100%.
it is very possible to use this configuration and many with older boards still do.

I_Got_Crabs said:
If you use clear tubing, then it will get more air really fast (in 2 or 3 years of use).
Click to expand...

this is total bs.
i have built and know many others who have also built custom cooling loops all with clear tubing and as long as you have properly connected & sealed all connections there is no further risk of air intake into the channels than using any solid color tubing.
the only difference between solid & clear is you don't get to view the liquid flowing with solid.
0
K

Just fyi for anyone else that needs info on this wiring, ASUS has updated the quickstart guide to properly show the cable is USB 2.0