Hey there!
I've been more than happy with my Ryzen 3600X for a year now, but I've always noticed some unusual behavior: It (almost) always boosts to 4.2GHz - even in idle.
The specs of the system are as follows:

Now to the problem in detail:
I have built four Ryzen systems now (including my build) for various people, all of them are running on Win10 Pro v2004.
All of these systems are clocking down to the value that I put in the brackets.
Some of these have the chipset drivers (and thus the Ryzen power plans) manually installed, some don't.
So far I can deduct from this, that the 3600X and also the mainboard should be able to automatically clock down to a more desirable speed.

As I've said before, my build ALMOST always boosts to 4.2GHz. I can manually disable the boost in BIOS, then the CPU is clocking constantly at 3.8GHz.
If I customize the max CPU load in Windows advanced power plans settings, I can get the clock down to 2.2GHz - but naturally then it won't go any higher than that.
It also doesn't matter wether the OS installation is brand now (like it is now) or not.

In the BIOS I've tried playing around with various settings, including disabling the Extreme Boost-feature, changing the Pstates and fiddling around with AMD cool & quiet. So far nothing has helped in this regard.

This is getting more frustrating by the day, especially since ambient temperatures have been on the rise for the last couple of days and 60°C idle with a Dark Rock Pro 4 doesn't seem all too well in my eyes (especially when compared to the 3600X of my friend, which sits on a chilly 35°C most of the time with the stock cooler).

Is there anything left for me to do/check? I think I can test my 3600X on the x570-board somewhen in the next two weeks to rule out a defective CPU. But other than that? :/
If there are any informations missing just ask me, I'm more than happy to answer them asap and as best as I can, so I can finally put this issue to rest.
0

Could try running UBuntu LIve USB to see if it is the same in another OS apart from windows, can run it off the USB. - https://itsfoss.com/create-live-usb-of-ubuntu-in-windows/

Precision Boost 2 should only happen when PC needs the speed to do a task, not at idle - https://www.amd.com/en/support/kb/faq/cpu-pb2

Welp, Linux's something I could've come up with myseslf. lscpu shows that the CPU is sitting on 2.2GHz at idle, but also reports that the min CPU clock is 2.2GHz (how are the 1.7GHz on the MSI x570 board possible then?).

Anyway, it looks like everything's fine with the system and Windows is at fault here. The used power plan doesn't matter tbh. There's virtually no difference between Ryzen Balanced, Ryzen High Performance or the three built-in Windows power plans. It's been this way when they were unmodified and is also happening now, with the min. CPU usage values adjusted. The Win10 UWP settings power slider also doesn't seem to do anything at all.

I've just made two screencaps of how it's clocked in idle with 70% max powerload, even though it should be going down to 2.2GHz, like it did on Linux Mint. 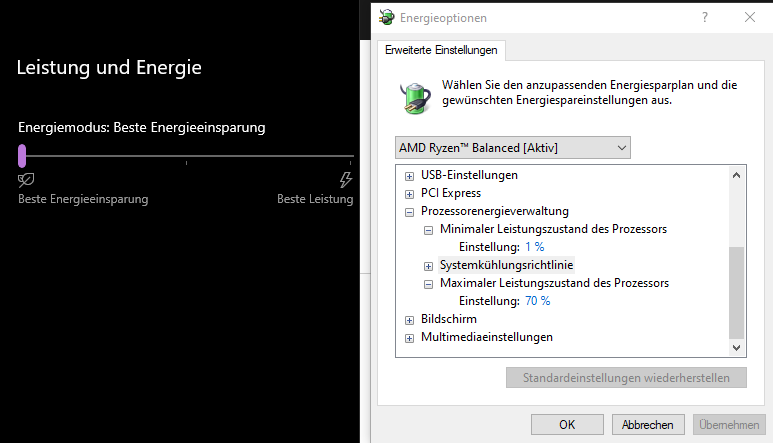 It's also basically the same when I adjust the maximum powerload to 100% - with precision boost turned off in the BIOS.

Sorry for the German UI, but I guess you can nonetheless get all the values from this :/

I'll boot into safe mode in a minute to see if it does anything different and edit this post then.
/edit: Yup, it's exactly the same. Clock is stuck at 3.8GHz.
0

SOme suggestions from elsewhere

link
I assume the g is a typo as latest bios is F51 - https://www.gigabyte.com/au/Motherboard/X470-AORUS-ULTRA-GAMING-rev-10/support#support-dl

2. Something's VERY wrong with Ryzen Master though. Ryzen Master reports a CPU speed of 800MHz@1.2V in idle. I mean, I can hear the fans ramp up significantly (Including the two fans on the cooler, 4 of them are tied to CPU temp) with the CPU staying somewhere around 50-60°C - meanwhile on Linux Mint the CPU was clocking at 2.2GHz@1.25V at 37°C, with most of the fans automatically turned off, because the temperature was under my set 40°C threshold. (And if I force the CPU on Windows with the power plan settings to max. 2.2GHz, it also reaches these temps.)

3. Neither ProcMon nor ResMon seem to deliver any valuable information that could help finding the issue unfortunately.

4. AUTO wasn't even an option on this board if I recall correctly, so it's already set to ENABLED.

5. I've set C-states to enabled about 3 hours ago, but it didn't change anything at all. :/


The linked thread also didn't help much. To be frank here - I just want the baseline config to work like the other 3 Ryzen systems I built. I don't want to restrict the base clock, I don't want to go to system settings every time when I need more power, I actually want Precision Boost (just not all the time ) BUT I also cannot live with a PC that's idling @~55°C with such a beefy cooler, if only due (but not limited) to the fact that I prefer it to be quiet.


/edit:
Here are two screencaps of the bios settings - anything else in there I could turn off/on?

I have the same processer and was having the same issue, also with the wraith prism cooler the constant ramping up and down of the fan was driving me insane! Tried everything too. I had to come up with a bit of a compromise. Seeming as 90% of the time I only use my PC for browsing/htpc, so I swap between 2 power plans. For regular use/browsing I use the ryzen balanced power plan and have turned the max processer state down to 99%,(which like you said, it only allows the cpu to reach it's base speed at max,) and when I game or other cpu intensive tasks I switch to the 1usmus ryzen power plan which gives me my boost back. This suits me really well.
0
D

Aight, "I figured it out", I guess. Now the CPU isn't turboing needlessly anymore but just when it needs the extra boost. It still clocks at ~3GHz when I'm just browsing the web, but it has it's drops down to 2.2ish GHz territory, which is fine to me.

Anyhow - the culpirit seems to have been the Bios. For whatever reason the Bios wouldn't store settings after a power-outage. I could replicate it all day long, if I wanted to:
I updated the Bios again with F51 but made sure that the backup bios was also flashed. Nothing. Same behavior as before.

Now why I've put the "I've figured it out" in the beginning in paranthesis - I don't know why, but for whatever reason my GPU ATX6+2 came loose (I guess thanks to the ATX cable extenders I've installed last week) and thus the PSU basically made my PC shutdown whenever I tried to play something load intensive. After it had one spectacular crash, where the error LEDs on the mainboard couldn't decide if the CPU, memory or GPU is at fault, it just did a hard poweroff all on its own. I checked the ATX cables and tried to power it back on - but it just wouldn't turn back on.

After 3 minutes it turned on by itself, the usual "Bios settings need to be reconfigured"-message appeared. After that? 2.2GHz in Windows. The Bios settings are getting stored, even if the PC was disconnected from mains.

I just don't know what has happened here. Borked Bios? Did the board switch to the backup Bios after it did that hard crash? I don't know. And honestly I don't care anymore, I'm just happy that this thing finally works like it's supposed to for the first time in a year.
Reactions: kurdtnz
0

That family of Gigabyte boards doesn't have dual bios, and even if it did, the 2nd bios is never live, its only for backup purposes in case the 1st one fails on boot, its meant to flash itself and restart.

in process of testing my PC, in sig. very similar specs. I will keep an eye on it, haven't seen it go below 3.9 yet. seems happy there. Only setting I changed in bios so far is XMP. That has stuck. Even through power being removed.
Last edited: Aug 22, 2020
0

Task manager doesn't seem to be right
If it was, it would agree with Ryzen masters score for CPU? wouldn't it? 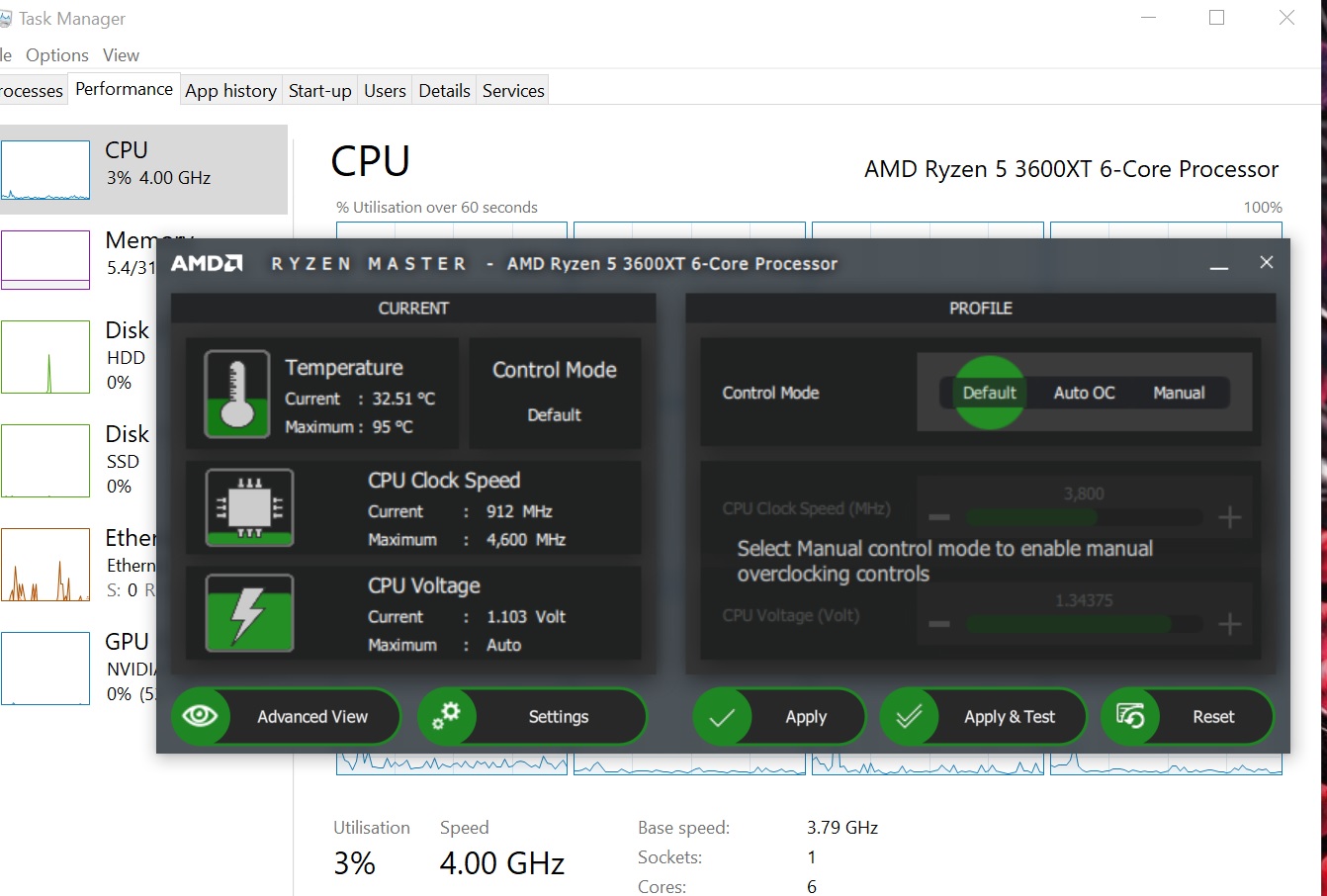 CPU clock speed can't be 900 and 4ghz at same time? that is mine btw
not running any oc, just use it to look at temps. HWINFO shows too many temps.
0

It is a windows error, it took them a few years to get the right speed on earlier gen chips too. Are you on WIn 10 2004 as that might help.

So since I have an XT I will just ignore it until they fix it...
0
D

Colif said:
That family of Gigabyte boards doesn't have dual bios, and even if it did, the 2nd bios is never live, its only for backup purposes in case the 1st one fails on boot, its meant to flash itself and restart.
Click to expand...

Actually, the first part isn't right. The x470 Ultra Gaming does indeed have dual bios - the only drawback being, that there's no switch to change between m_bios and b_bios nilly willy, like I could do on my old Intel boards.
And I mean, that was entirely my point. I guess the m_bios failed so spectacularly that b_bios had to kick in. I've worked a fair bit with NOR- and NAND-flash cells and if not for that I have no idea why every problem is now fixed - so my best guess is that it was completely erased and reflashed. Maybe on a level that a qflash-update isn't able to do (i.e. low level erase == electrically wiped chip)


Colif said:
Task manager doesn't seem to be right
If it was, it would agree with Ryzen masters score for CPU? wouldn't it?
Click to expand...

Like this screenshot was made at random, I didn't have to wait for it to come down to sub-4GHz territory or something. It just happily switches between 2.2GHz up to 4.2GHz. And as I said the temps are now more in line with what others have reported.

And that's where and why I trust hwinfo64/Windows Task Manager a fair bit more, and that's even factoring out, if not straight up ignoring, my experience with how AMD has regularly put out garbage disguised as a graphics driver control interface in the past.

As I said in the OP, yes, I'm on 2004. Was always since it was greenlit for the general public (-> I'm not partaking in the insider programme)
You must log in or register to reply here.
Share:
Facebook Twitter Reddit Tumblr WhatsApp Email Link