Hey,
I have a Ryzen 5800x for a while now paired with Corsair H150i Pro 360mm cooler. I've noticed it a long time ago but I did some quick googling stating that Ryzens tends to idle on high temps and its "fine".
What Im curious about is the constant very high voltage. Im using Gigabyte X570 Aorus Pro motherboard and all I did is setting PBO on and AutoOC to +200MHz, yet my CPU idles at average 1.46-1.47v. In games its about 1.45v average. It seems very high. Cooler is working properly and thermal paste (Kryonaut) is applied properly, covering whole IHS.
This screenshot shows idle CPU. 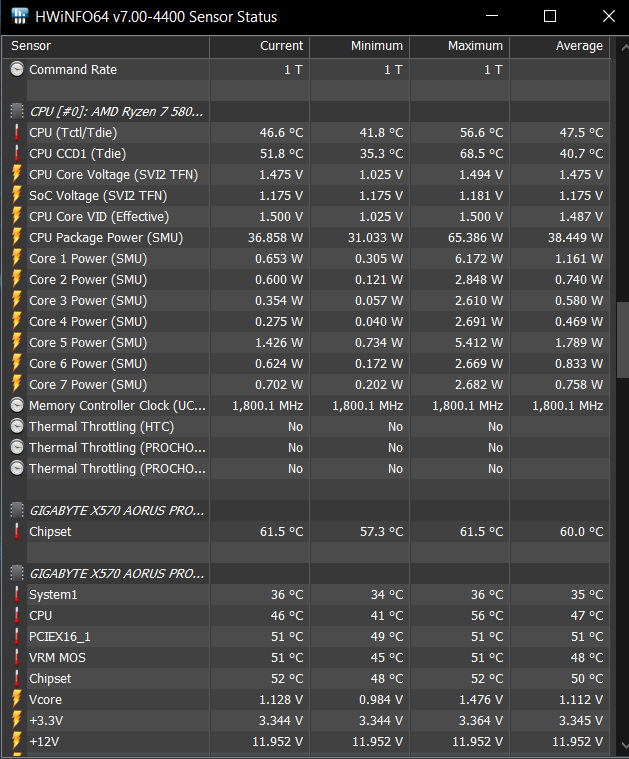 Is there something I can do about it? I've read something about undervolting but will it fix the problem and how much of a performance hit are we talking here? Or is it just all normal stuff for this Ryzen CPU?
1
D

Ryzen CPU's will raise voltage up to 1.5V as it boosts...AMD's said before this is normal and by design. Ryzen 5000 seems to boost even more aggressively than Ryzen 3000 does so there's always a core boosting along with it's raised volltage. But it only boosts as high as max clocks on one or two cores at a time and for light bursty loads, meaning neither core current nor temp can be high. In your monitoring screen note that although core voltage (SVI2 TFN) is averaging 1.475V, CPU (Tdie) average is 40.7C which is quite cool so it's not being stressed by it.

It is high core current concurrent with high core temperature that degrades semiconductors, voltage is just the only knob we have available to adjust aside from clock frequency which directly affects performance. As you load the CPU with a heavier processing load it will raise core current and temps along with it but average core voltage will be lowered by the algorithm --perhaps as low as 1.2V-- to protect the CPU as it happens. Average clocks will be lowered by the boost algorithm too since it has to maintain stability.

With that in mind you might be able to lower voltage a tad but do it ONLY with offset adjustments so that the algorithm can lower it even further as the CPU gets hot in heavy loads. But be sure to check performance with a good benchmark program as you do (CB20 or 23 is best) because you can lower it too much and affect stability or light threaded performance. The reason to do this is it might allow for slightly lower temperatures at heavy loads, which means the boost algorithm will maintain slightly higher average clocks with improved performance resulting. You may not actually see a lower temperature in heavy workloads just better performance because the the boost algorithm will still aim for the temp limits (around 90C in a 5800X) to govern it's boosting.
Last edited: Nov 3, 2021
You must log in or register to reply here.
Share:
Facebook Twitter Reddit Tumblr WhatsApp Email Link