A Samsung 850 PRO 1 TB SSD is constantly reporting pre-fail SMART problems for me on Mac OS 10.14.6 with the Drive Dx app and Techtools Pro 14, SMART check.

I had the drive in a UASP capable USB 3 enclosure and ran it with Mac OS 10.12 as an external drive for storage. Mac OS did not recognise this drive as an SSD and did not enable TRIM on this device.
At some stage I ran Drive Dx which started to report errors. These were SMART Flash Read Fail count errors which would increment whenever the OS read a bad section of the SSD. Running the Extended Self Test through Drive Dx gave me Completed: read failure with LBA of 1st error at 546,559,560. Flash read fail count would increment on Drive Dx. Scanning the drive with Techtool Pro 14 also gave an error at 546,559,560. Backing up the drive there was one file which was unreadable.

The TBW on this drive is on 2.7TB out of 300TBW. I put the drive into a Thunderbolt 1/2 enclosure and hooked it up to Mac OS 10.14. I backed it up and reformatted it with the APFS file system. Mac now recognises it as an SSD with TRIM enabled. I have not seen any more errors and the Flash Read Fail Count is still stuck at 824 but is not incrementing. A full "surface" scan of the drive did not reveal any errors. Drive Dx however still warns me that the drive is failing because of the Flash Read Fail Count being 824.

So is this drive fine? Has the "bad memory sector" been mapped out and unless I see more errors appear elsewhere I do not need to return it? This thing has a 10 year warranty and I still have 6 years to go. Thanks.

I'd just like to add, OS X is terrible at handling SSDs in UASP connected USB 3 enclosures. They're simply not recognised as SSDs and TRIM command is not passed on to the drive.
I don't have a newer Macbook Pro beyond 2015 but it's only through Thunderbolt that SSDs are recognised as SSDs and not mere rotating HDDs. 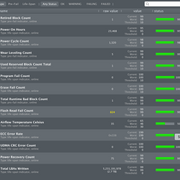 If you scroll down to the bottom of this page from Samsung, you should see a firmware download for the SSD. Perhaps that's what your SSD is pending. Guide to updating firmware on Samsung SSD's while on a Mac device is mentioned here or here.
0
S

Thank you. I managed to do the FW upgrade but DriveDx still reports drive as pre-failing. The flash read fail count hasn't increased though and is still at 824. Maybe it's just junk OSX drive monitoring software?
I think previously as drive was in USB enclosure OSX treated it as a HDD and did not TRIM and now I managed to get it installed via thunderbolt, and converted it to APFS... maybe the bad memory block was deallocated and drive is otherwise healthy? Aren't all SSDs meant to have a few bad blocks which get reassigned by the drive? Of course Drive Dx support does not answer and neither does Samsung support.
You must log in or register to reply here.
Share:
Facebook Twitter Reddit Tumblr WhatsApp Email Link