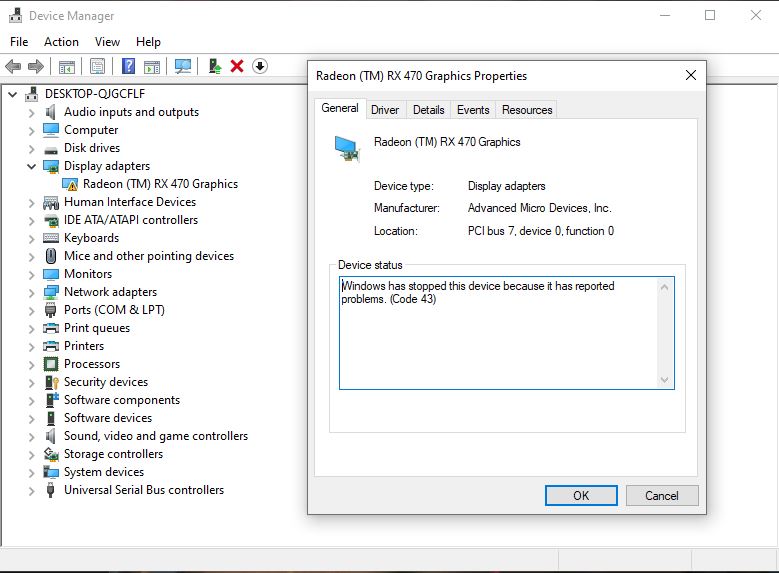 Any suggestions what I can do next to try fix my gpu?
Problem:
-Code 43
-After code 43 happened, pc will boot 1 out of 3 boots. I don't know if it's like a placebo but whenever it doesn't boot (PC fans running but there's no display, and keyboard and mouse LED is not lighting), I'll let it rest for a minute then it will boot properly.

What happened:
I'm playing apex legends for around 10 minutes then pc suddenly crashed. After pc restarted, radeon drivers won't load and when I went to dxdiag, it says "There is a problem with Radeon (TM) RX 470 Graphics device. For more information, search for 'graphics device driver error code 43' "

What I've tried in chronological order:
-DDU then install latest driver (didn't work)
-DDU then install old (2019, 2020) driver (didn't work)
-Installed latest driver back
-Reflash to stock bios (screenshot attached below) (it worked but after playing apex for around 10 mins, it crashed again and it says code 43 again)
-Reflash to previous bios (modified bios)
--Btw, i don't have gpu-z screenshot of the modified bios of the gpu but here's the difference of it from the stock bios as I remember. BIOS Version - 015.050.000.001.000000. Default Clock 1206 MHz, Memory 1750 MHz.
-Reflash to stock bios then pixel patch (didn't work)
-Tried gpu on another pc (still code 43) 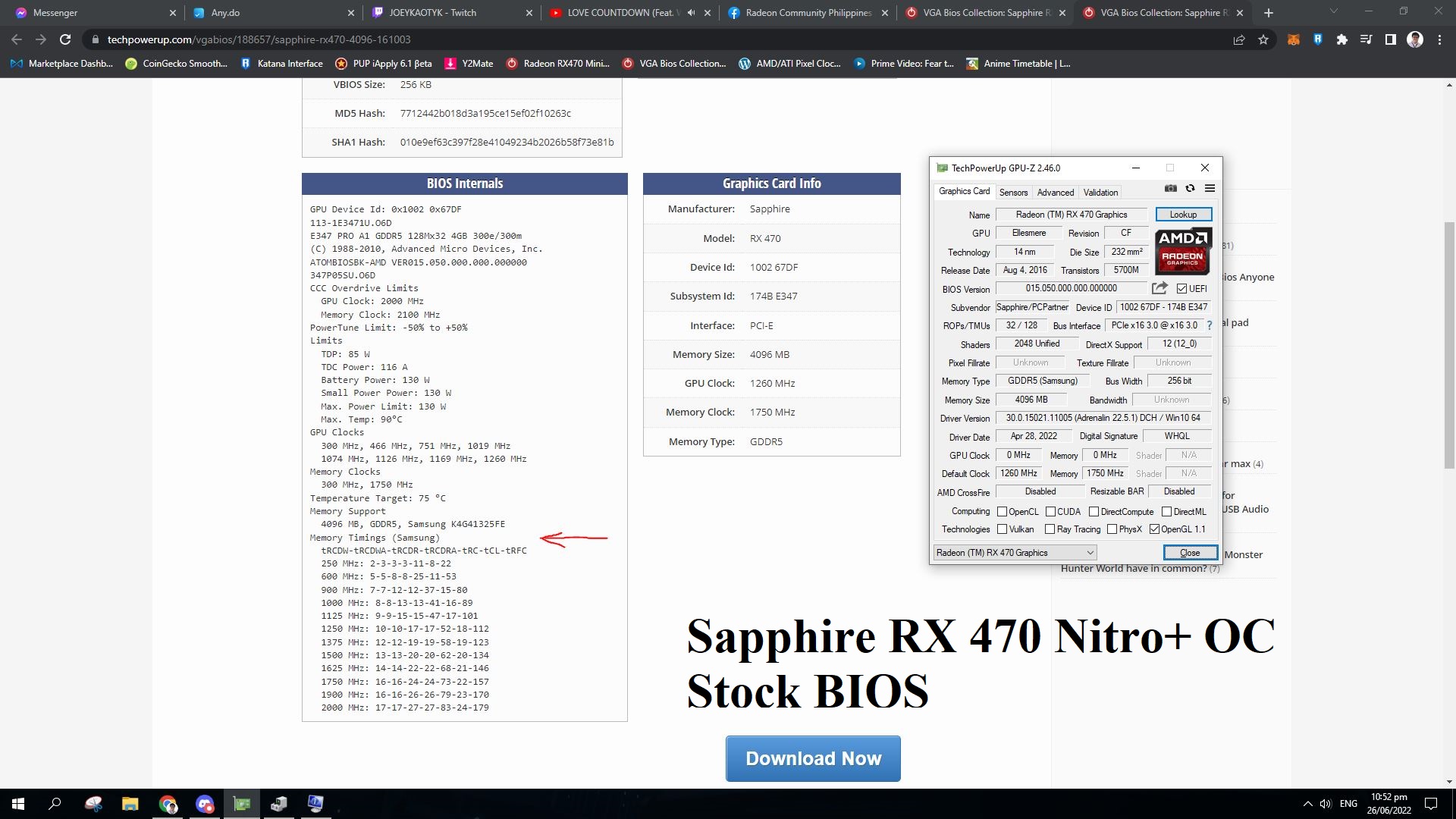 I can still use my pc for twitch, discord, ms office. Gaming is the only thing I've tried that my pc can't do.
0

The above Error code 43 can be reported anytime when Windows does not recognize a device – whether it's a USB port, Hard drive, video card/GPU, or any other piece of hardware connected to the computer. Most of the time, error code 43 means that a device driver is either missing, corrupt, and/or outdated (so Windows has problems communicating properly with the hardware), or the hardware is faulty and needs to be replaced.

This error code points out that the Hardware might also be defective, which is the GPU. But before we jump to any conclusion, we can check the card on some other PC as well. But it appears you have tried installing this GPU on some other system as well ? Same Error code ?

Looks like some VGA BIOS issue to me though.

Can you properly boot your current system/OS, by using the 'Integrated Graphics processor' of your current Motherboard ? Do you still get the same problem ? And, what about SAFE MODE ? Is the card displayed under the "Device Manager" Windows settings ?

Also, are you on a FRESH Windows OS install ? If not, then try doing a clean format of your SSD/HDD, if need be. Clear and reset ALL the CMOS/BIOS settings to default.

Error code 43 is a generic message that typically indicates a problem with the hardware or software in Windows operating system. This error is often reported in Windows Device Manager. If you encounter this error with your graphics card, here are some troubleshooting ideas that may help fix it. But some of these you have already tried.

1) Update your graphics card driver. Do a CLEAN re-install by using the DDU tool. https://www.wagnardsoft.com/

4) If your card needs additional power, make sure the PCIe supplemental power connector is plugged into the card

5) Replace the graphics card as it may be defective

Code 43 can mostly happens either if drivers fail or the hardware fails.

Other option is that your GPU or motherboard slot failed. If your motherboard has more then one PCIe x16 slot, you can move GPU to another slot to rule out motherboard failure. Or you should test GPU in another machine to confirm that problem lies in the card.