I posted this to Tom's Guide general/offtopic, but this is probably a more appropriate place for it.

Due to me not being able to figure out display pixel timing while intoxicated, both D3D12 tests are penalized by Passmark for running at only 1080p as opposed to 3840x2160 (I don't own a 4K display).

The target demographics for these low profile cards is people with systems like the Dell Optiplex 30xx/70xx/90xx SFF systems with very little space, especially not room for a full size card.

The Passmark D3D9 test crippled the RX6400, this is likely because PassMark's implementation of MSAA strongly favors NVIDIA cards. In all other tests the RX6400 appears to be 1.2 to 1.6 times faster than the 1050 Ti on top of being cheaper, quieter, and consumes less power at idle and less system resources (PCIe links in particular). 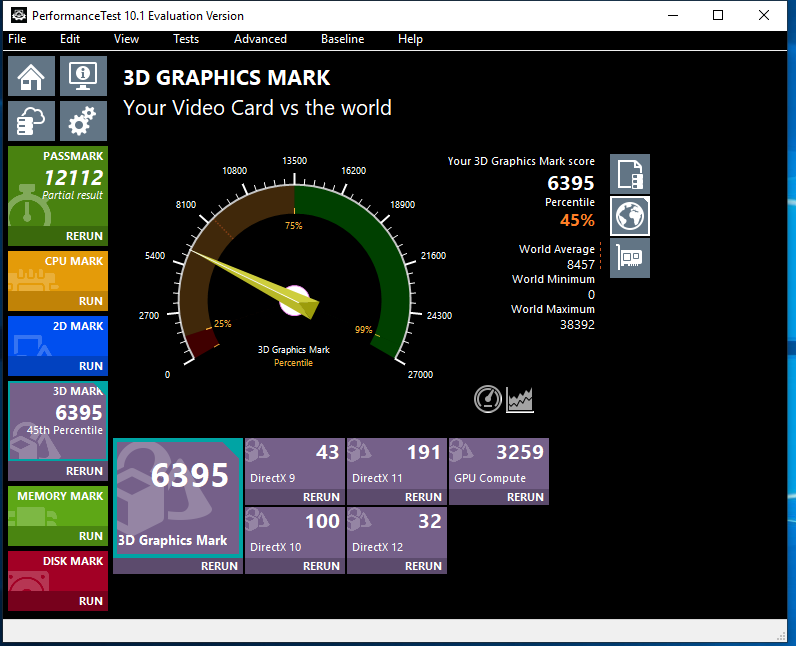 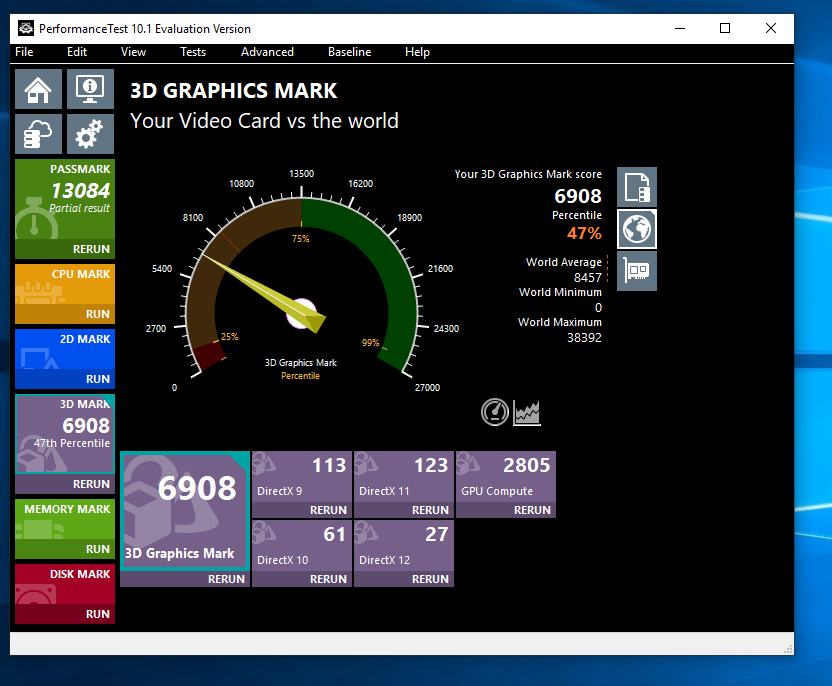 The exact same results for both GPUs seems rather coincidental. Are you certain you didn't post the same results twice?
0

COLGeek said:
The exact same results for both GPUs seems rather coincidental. Are you certain you didn't post the same results twice?
Click to expand...

yeah i am dumb gimme a sec to fix, i just copied the post I made on TG, I must not have copied the second link properly

Side effect of being drunk all the time!
0

Etrius vanRandr said:
Side effect of being drunk all the time!
Click to expand...

Not good for you.

On the comparison, I am not surprised by the results. The RX 6400 has been panned in nearly all reviews. It is a basic use GPU with poor modern performance.

The venerable GTX 1050 Ti has surprising performance, even with the disadvantage of age. Still, by today's standards, it is certainly on the low end of the performance curve.

COLGeek said:
Not good for you.

Oh trust me it's better for everyone. Otherwise I'm bitter all the time and no fun to be around.


COLGeek said:
On the comparison, I am not surprised by the results. The RX 6400 has been panned in nearly all reviews. It is a basic use GPU with poor modern performance.
Click to expand...

What? Poor modern performance? it's the AMD equivalent of the GT 1030 and is like, twice as fast. It released at a poor time when AMD still has no freakin idea how to price things AND the GPU market has been used, abused, and tossed in a gutter with a bitter cream filling by the crypto market and chip shortage.

At its price point, yes it's poor value for money.

Not to be ignored however, is the fact that it's currently one of the best GPUs for its size.
Last edited by a moderator: Jul 31, 2022
0

There is nothing wrong with the RX 6400 if that is all you need. If you expect to game with it, expect to be disappointed. It wasn't designed for that.
0

COLGeek said:
. If you expect to game with it, expect to be disappointed. It wasn't designed for that
Click to expand...

It actually does quite well despite the PCIe link cut. The main reason for this post is to provide a fast comparison to people looking for a good low profile card - AKA poor people who got an Optiplex or HP EliteDesk off eBay and want to play Fortnite at greater than the 25FPS Intel HD 4000 gets them.

The 1050 Ti is still the same price used in LP form factor, and LP GPUs are always expensive. For its size and weight the 6400 LP is the best value available.

Reason I have it is for this glorious thing. The motherboard is 1 slot larger than mini ITX so the 1050 Ti won't fit without severe modification. Toto, I don't think this is an Optiplex anymore. 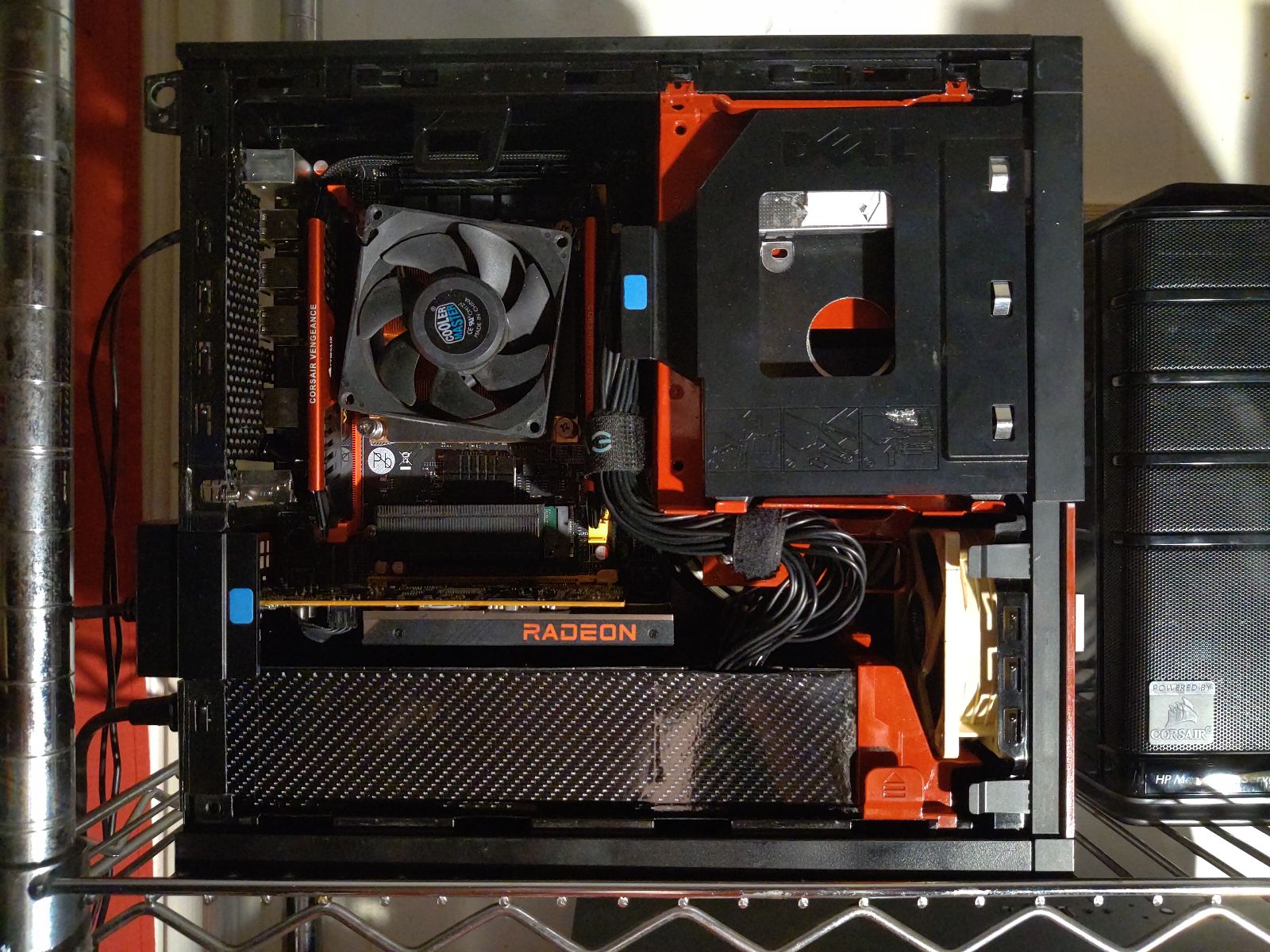 I have used single slot FirePros for similarly constrained rigs. That (the RX 6400) is an solid choice for your rig.
0

COLGeek said:
I have used single slot FirePros for similarly constrained rigs. That (the RX 6400) is an solid choice for your rig.
Click to expand...

Funnily enough this isn't the same system these benchmarks were run in, no, this is a completely different beast.

I completely rewired the PSU since the original cables are far too short and rewired the front panel AND power button, something Dell doesn't make easy. Thankfully there is plenty of community documentation on the FP and PB pinouts.

The motherboard is one of those Chinese X79 boards, most of the time they come with a B or Q series chipset, this one came with a C602J chipset! What a steal since C602J boards are expensive. I might even be able to run an E7 in this thing.

The cooler is a Dynatron R18 with the blower removed, the mount plate cut open, and a CM 80mm mounted to the massive copper finstack/coldplate. I've put a LOT of work into this thing and the main reason I wanted to do this comparison was to see if cutting up the 1050 Ti would be worth it because the 1050 Ti is two slots.

COLGeek said:
I have used single slot FirePros for similarly constrained rigs. That (the RX 6400) is an solid choice for your rig.
Click to expand...

I just realized that Intel ARC GPUs are using DX9on12, which is why they soil themselves running anything DX9 native.