Greetings, after a few weeks of research, youtube comparison videos i finally got myself to switch from nVidia ( GTX 1060 6GB OCed to 2200Mhz ) to a Sapphire RX 5700 XT Nitro+

My rig is as follows

I used to keep my CPU OC-ed @ 4.1Ghz and left the GPU on default settings from the AMD Driver.

After a few weeks, i bought Read Dead Redemption 2, and while playing, i would sometimes get a crash, after waiting 1 - 2 minutes, the screen would look like a TV without reception ( Noise ) and it would stay that way untill i manually restarted the PC, then it would be ok for a while. I tought it may have been because of the game, so i finished the game like that.
Then, when i was playing COD Warzone, i started getting random Error 6068 DirectX crashes, like i could play a game, and then get the crash, or play 20 games and then crash ( I didnt use to get this error before i got it the first time in RDR2)
So, obviously i was upset, since i invested somewhere around $420 in this piece of hardware.
I searched for my specific problem for a couple of weeks now, and i had it narrowed down to either the PSU not having enough juice to sustain the whole system, or either the AMD Driver just being bad.
I left the CPU on stock settings, removed the OC, removed the XMP profile from the RAM and Undervolted my GPU all to stress the PSU as less as possible and i highly doubt it was using close to 500W.
Things seemed fine, then i started getting random crashes in any game, League of Legends, Valorant etc, where it would sometimes say the AMD Driver managed to recover. I checked Event Manager, and it showed that the driver was crashing multiple times but recovered so it didnt crash my games the majority of times.
I uninstaled the Optional Driver (Using DDU) i had installed, and went for the Verified one. Worked ok for a day, then the crashes started again. I uninstalled the drivers again and went for the Optional one. Same thing.
Now, my Motherboard has 2 PCIE Slots, and my GPU was in the Bottom Slot (Slot2) so i decided last night to move it in the top slot (Slot1).
I used Unigen to benchmark the stability, everything seemed ok, but i used it before and it was the same thing.

Long story short, do you guys think that the PCIE Slots deliver different energy outputs and maybe the card didnt have enough juice to work with in the former slot? (I tried looking it up, but couldnt find any specific information about it) or are the AMD Drivers just <Mod Edit>?

Is there any workaround, or should i just sell the GPU and go for a 2060 Super even tough i'd be losing performance?

Sorry for the long post, i wanted to be as thorough as possible to get some good feedback from someone that either went through the same problem, or has some knowledge about what's going on here.

I really appreciate anyone who took time to read and try to give me some input =]
Last edited by a moderator: May 22, 2020
0

If possible, one most efficient way to narrow hardware issues is swapping with another part. Can you find another and better PSU and connect everything on that and try again? Just like that swapping GPU with somewhat equal powerdrawing GPU and testing might help.

From this point I'm guessing it's software issue either in Windows itself or AMD if not power. But there is also a possibility with dual monitors. There were a lot of problems with multi-monitor setups so can you try to use single for a little bit and see if issue persist.
Reactions: Evreu
0

Now that you mention it, most of my problems started by the time i got my 2nd monitor. I dont use it for anything other than watching youtube or netflix while playing casual games.

Regarding the PSU problem, i dont have a better one nor a friend that could help. But at this point i highly doubt its a power option, since i stayed the first 2 weeks with the GPU Overclocked and the CPU as well, and had no issues like Auto shut down or system restarts.

I still think it's a driver issue, but since no one else experienced these problems, its hard to say for sure
0

Actually a lot of people are experiencing similar issues with multi-monitor setups while using RX 5700 XT. Some of them couldn't set desktop resolution to 1080p for example because it would give black screen etc. If that's the reason, you can either switch back to Nvidia(2060S or 2070 with price addition) or use single monitor especially for gaming.
Reactions: Evreu
0
C

That's what it recommends. but my CPU Goes to like 80W on OC, and the GPU itself in full load goes to 230W, combined with all the other components like RGB, Extra Fans, HDD, SSD, i hardly think it reaches 500W, honestly.

Edit: I went back to a 1 Monitor setup and keeping everything stock, will come back with a reply in a couple of days if this seems stable.
0

PSU's power outage is not like a cake. Most important one is 12v supply. 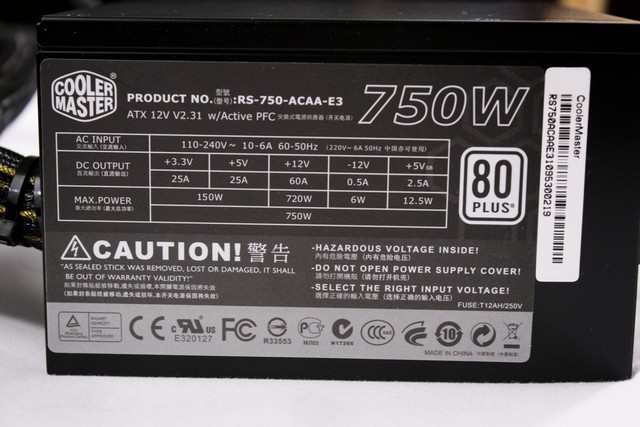 You can check it on the side of your PSU.

Most units are efficient around 50% of their limits. Most suitable PSU for you would be a whopping 1000W unit but with a good brand and make, with 80+ at least Bronze certificate, I would recommend a 750W just to be safe.

Please consider these if you happen to experience more of your issues with single monitor setup.
0

Evreu said:
That's what it recommends. but my CPU Goes to like 80W on OC, and the GPU itself in full load goes to 230W, combined with all the other components like RGB, Extra Fans, HDD, SSD, i hardly think it reaches 500W, honestly.

Edit: I went back to a 1 Monitor setup and keeping everything stock, will come back with a reply in a couple of days if this seems stable.
Click to expand...

I just installed Civilization 6, tried opening it in DirectX 12, all options on Ultra and i kept getting crashes during loading screen telling me that my display driver failed.
I then switched to DirectX 11, i was able to get into the game for a few minutes, then i got the same Display Driver Fail error.

I checked Event Viewer, and this is what it shows.

At this point im almost sure it's a driver issue.
0

I heard from Tech Deals one time that he had to use DDU, then AMD's cleaning tool, then DDU again, then installing maybe working fine. You can try a couple more fresh driver installation. Not an expert on AMD graphics drivers.
Reactions: Evreu
You must log in or register to reply here.
Share:
Facebook Twitter Reddit Tumblr WhatsApp Email Link