Hey ppl, need help. Lets look into situation: i have 2 modern SATA SSDs in RAID0 connected to SATA 3.0GB/s ports. Question is: Can the speed of data transfer exceed 3.0 gb/s in such scenario? Is 3gb/s a controller limit or per-port limit?
Ty in advance.
0

You have them in this cofig already?

What tests have you run, and what do they show?
0

It's per port but raid 0 will not double the speed. Pretty close though. I get just over 1000Mb/s
This applies only to sequential speeds. Other speeds, like random 4k (the low numbers you see on benchmarks 20-45mb/s) actually slow down some . My drives that are capable of 35Mb/s each score 25mb/s together in Raid0. Sandisk Extreme Pro 480Gb. 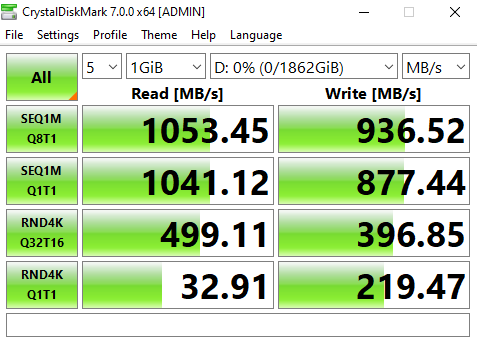 Performance for the intended purpose is excellent.

That 2TB partition is for my Games, and I preferred to have it as one space instead of 2 separate drives. My OS and apps run off my Corsair drive.
You must log in or register to reply here.
Share:
Facebook Twitter Reddit Tumblr WhatsApp Email Link