All three major hard drive vendors have now admitted to selling lesser SMR drives without disclosing it to customers.

I very much hope they start making it easy to tell which drives are SMR/PMR/CMR because it has become a massive pain in terms of how much research you need to do before buying a drive nowadays... Even then I accidentally bought an SMR drive a few months ago when I had been sure it was PMR/CMR at the time >.<
Reactions: bit_user

I would have upgraded to 8 TB WD Reds if I had known.

Damn, yesterday bought P300 4TB and was hesitating between X300 4TB...
If only this post was published 2 days ago.....
Reactions: bit_user
H

questioning if this could lead to a lawsuit
Reactions: bit_user

hotaru251 said:
questioning if this could lead to a lawsuit
Click to expand...

Only if the firmware proves somehow defective with zfs and other file systems as someone claims with wd EFAX drives
Last edited: Apr 16, 2020
G

This really sucks. I was planning on getting several drives to update my NAS. When I saw the article about WD I decided I would have to jump ship and move to Seagate. Now it doesn't look like I can do that either. I understand SMR is not an issue for my uses. My drives are primarily used as a plex server. However, the problems it seems to cause with RAID or ZFS are a serious concern. It's not really RAID if you can lose all your data because your drives are using an incompatible tech! I was planning on a RAID5, looks like I may need to down grade to a RAID1 or shell out for 8TB and wait to expand the array until I have more cash.

Given that SMR drives suffer from abysmal random write performance, which is a key type of write pattern that impacts performance in desktop operating systems, the drives will result in noticeably slower performance for PC users.
Click to expand...

Really though, random write performance has always been pretty abysmal for mechanical hard drives, and this is just worse. However, we have been getting to the point where most system these days tend to be shipping with an SSD boot drive, and for bulk data storage the performance of these drives should be reasonable. I guess they could potentially be problematic for someone wanting to install an extended game library to a hard drive though, and some RAID setups seem to have problems with them.

Obviously, the use of SMR should be indicated, and not just randomly substituted into existing drives. Hard drive companies have been doing similar things for years though, cutting corners on existing models of drives, changing platter counts and so on, without really providing any indication of such changes. The changes made here can have a bigger impact on performance though.
E

Only if the firmware proves somehow defective with zfs and other file systems as someone claims with wd EFAX drives
Click to expand...

I'd be surprised if at least some states' law didn't allow for a successful class action. A lot of people wouldn't buy SMR drives for a NAS intentionally. They're technologically inferior, cheaper to produce products not suited for NAS use according to industry experts like Backblaze. https://www.backblaze.com/blog/hard-drive-buying-guide/

For example, buying SMR drives for your NAS device running RAID 6 would be ugly because of all the rewrites that may be involved.
Click to expand...

Unless they're only marketing the SMR drives for single drive NAS for use as archives, then it looks like they are duping buyers to me. I'd hit up a lawyer for advice if I'd bought some Red drives for a NAS and ended up with SMR.

They do have datasheets, if you search for them. I know I've seen at least active & idle power specs on some.

grimfox said:
This really sucks. I was planning on getting several drives to update my NAS. When I saw the article about WD I decided I would have to jump ship and move to Seagate. Now it doesn't look like I can do that either.
Click to expand...

It's not all drives. AFAIK, the WD Red Pro (7200 RPM) drives are supposedly unaffected. Presumably Gold and Black, as well.

@PaulAlcorn , thanks again for covering the issue.

Please let us know of any further developments.
G

bit_user said:
It's not all drives. AFAIK, the WD Red Pro (7200 RPM) drives are supposedly unaffected. Presumably Gold and Black, as well.
Click to expand...

As you can see in the link below there's a slight cost difference between the non-pro and pro drives.

Sure I can just get Pro drives. And I probably will. But for the security of not losing my array I'm paying a hefty fee of around 30%. For a single drive it's not awful. But by definition it's not a single drive. It's a NAS drive, so you are buying at least 2, more likely 4 or more. At 4x 4tb pros I pay $136 extra. More than the cost of one non-pro drive. I'm sacrificing essentially 4tb for that security. The only upside is that I might pay slightly less in shipping because I bought 1 fewer drives reducing my total shipping weight.

grimfox said:
Sure I can just get Pro drives. And I probably will. But for the security of not losing my array I'm paying a hefty fee of around 30%.
Click to expand...

I get that, and I'm not saying it's ideal - just not as bleak and hopeless as you seemed to paint it.

Yup. I've been there, too. I know how the costs multiply.

Look, there could well be other options. I haven't been following that closely, but I gather you can probably still find non-SMR non-pro drives, if you look.

On the plus side, it looks like Seagate has clarified, at least for their NAS drives: 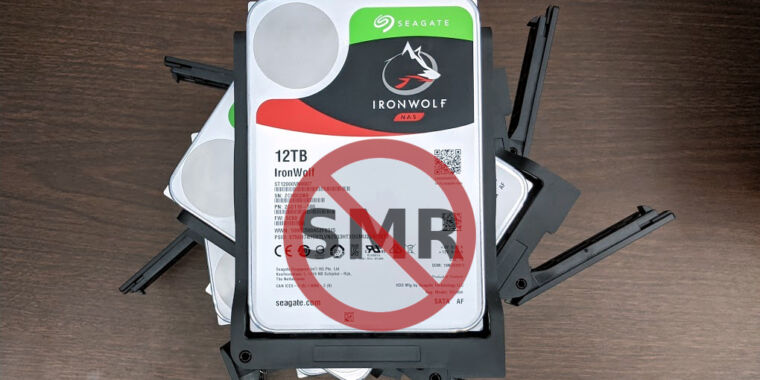 (apologies for cross-post, but it seemed applicable to this thread and the conversation as it evolved in the WD SMR thread as well)
Reactions: bit_user
You must log in or register to reply here.
Share:
Facebook Twitter Reddit Tumblr WhatsApp Email Link