Info Something to consider for laptops

This spawned out of trying to figure out how to get my ASUS G14 laptop from running uncomfortably hot when it was sitting there. There is the Armoury Crate app which lets you configure how much power you want to cap the CPU to, but that didn't really help much. I could've tried Ryzen Master, but I didn't really feel getting yet another app to configure the processor. And there's no options in its UEFI settings to change any of the processor power management settings (so I can't touch PBO or anything like that). 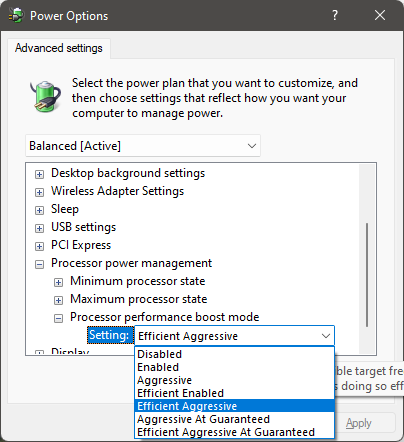 It's the "Processor performance boost mode" option. Also unlike a lot of other registry settings, you don't have to log out/log in, its effect is immediate.

The option was set to "Aggressive" by default on all my power profiles, which means the processor will do its damnedest to boost. I set it to "Disabled" on my laptop, which means it won't ever turbo boost. Also, the effect is immediate, you don't have to reboot. While I haven't tried extensive gaming with it, I can immediately tell a difference when it's idling around that it runs cooler and the fans aren't spinning up as much. A cursory glance on Reddit showed me people found the best of both worlds (getting boost and relatively tame heat output) with Efficient Aggressive.

The neat thing is whenever I want to have turbo boost again, I just flip this back on. Why Microsoft chose to hide this option is beyond me.

EDIT: Before anyone asks me anything about my laptop or why it was getting "uncomfortably hot" to begin with