I have been working on this issue for hours now and it is absolutely BAFFLING me to the point where I have no other options...

I was planning on cloning my Samsung 850 EVO 250 GB as it was running low on space, so I performed a quick restart before performing the cloning procedure. I noticed that the restart took EXTREMELY long... about 5 minutes stuck on the Windows icon with the circular loading animation. This was odd, because just a week ago or so my computer was booting up quickly and with ease.

I figured that it may be my SSD, so I went ahead and performed the cloning procedure (cloned my drive to a Samsung 860 EVO 1 TB). Went extremely smoothly, but the issue still persisted and my boot times were still as slow! I checked my BIOS, but my new SSD was still the only drive enabled for booting. Fed up, I performed a refresh of Windows (reinstalling Windows while keeping all the apps and files). Wasted three hours of my life for absolutely no difference in boot times still.

The power management settings are still set to Ultimate Performance. There are no startup apps enabled and still, the boot time is the exact same. I even tried disconnecting the other two HDDs connected to my PC and booting with just my SSD plugged in, but still the same issue.

I ran a test on UserBenchMark.com and my new SSD is performing above expectations, so I don't think its a hardware issue in that aspect.

I tried uninstalling some programs and my anti virus (malwarebytes) as well. I even ran a virus scan, which came back with no threats. I am absolutely baffled as to what it could be. I know that it is not a hardware issue as I just replaced my SSD with a brand new one. I am open to any suggestions. Thank you very much.

Your problem is likely a borked registry problem. This usually end up being a case of needing to do a clean install but there are a few things you can try first.

I'd start by running the online DISM repair.


The /RestoreHealth parameter runs a scan for corruption and attempts to repair any issues that it finds automatically.


The scan takes longer to complete if corruption is found during the scan of the image. Note that the operation may appear stuck at times but this is no cause for concern as scanning should commence after a moment automatically.


If the scan finds corruption, it attempts to correct the issue using Windows Update by default.


And then completion of that run the SFC Scannow file checker. 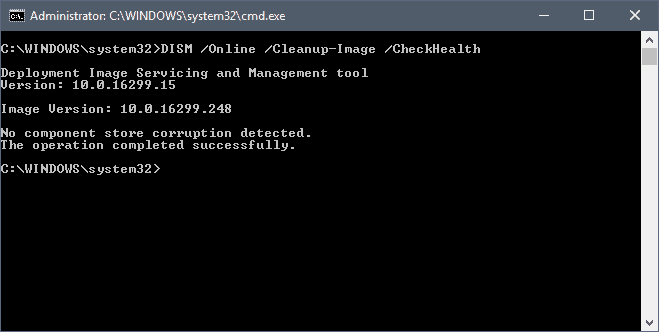 How to use the DISM command line tool to repair Windows operating system issues if SFC /scannow does not resolve them.
www.ghacks.net


If you are using the same SATA cable you were using with the old SSD, try using a different SATA cable as well. Make sure that it is connected to the SATA 0 header on your motherboard or the SATA 1 header if there is no SATA 0 header.

In the event you end up NEEDING to do a CLEAN install of Windows, make sure that ALL other drives, not counting the device you are installing Windows FROM, are disconnected during the installation.

How To - How to do a CLEAN installation of Windows 10

Windows 10 Clean install tutorial This tutorial is intended to help you, step by step, to perform a clean install of Windows version 10, build 1709 or newer but can be equally applied to earlier installer versions which may simply lack some of the Cortana assisted settings screens but should...

Ok I removed the cables from my two hard drives and connected my new SSD through one of those cables and changed settings in BIOS. Boot times are STILL slow. I guess I will have to do a clean install of Windows. I also tried the above options but no luck as the disks were perfectly healthy.

I have the data in my new SSD backed up to my old SSD. How do I perform a clean install and then back up all my data?
0

Another question, I have two SSDs (250 GB and 1 TB) that contain the exact same information because the smaller drive information was cloned to the larger one. Can I perform a clean install on the 250 GB drive with my other hard drives unplugged, and then reboot with my 1 TB drive with all my previous information on it?
0

Ok sorry for the spam of posts, but I did a clean install and the issue has gone away. However, I want to restore the version of Windows from my other SSD into this one. How do I go about doing this?
0

What do you mean "restore the version of Windows from my other SSD into this one".

If you mean how do you move the copy of Windows that's installed on the other SSD to the new SSD, by cloning it, I would advise against it, because you've already tried that and clearly there is something WRONG in the registry or boot record on that installation that was causing the problem. There is, unfortunately, not any way to import your programs that were installed INTO the clean install. You need to reinstall them. You can pull your personal files and save the contents of personal folders, or specific documents, music, movies, things of that nature, game files, etc., but the actual applications and such must be reinstalled.
0

Thank you for your help. I guess I can live with slow boot times as having to reinstall all of my programs will take far too long.
0

That 5 minute booting means Something. Is. Wrong.
Not with the physical drive, but rather the software.
The clone simply moved that problem to the new drive.

Living with that as opposed to the clean install and reinstalling your applications is a time bomb waiting to happen.
I expect that OS install will die completely sooner or later.
Reactions: Darkbreeze
0

USAFRet said:
That 5 minute booting means Something. Is. Wrong.
Not with the physical drive, but rather the software.
The clone simply moved that problem to the new drive.

Living with that as opposed to the clean install and reinstalling your applications is a time bomb waiting to happen.
I expect that OS install will die completely sooner or later.
Click to expand...

USAFRet said:
That 5 minute booting means Something. Is. Wrong.
Not with the physical drive, but rather the software.
The clone simply moved that problem to the new drive.

Living with that as opposed to the clean install and reinstalling your applications is a time bomb waiting to happen.
I expect that OS install will die completely sooner or later.
Click to expand...

So either way, I'll have to wipe all my programs and do a full reinstall?
0

Darkbreeze said:
My point exactly. This is 100% correct. No doubt about it. Not IF, but WHEN.
Click to expand...

You reckon my SSD will just fail to boot up one day?
0

z1rk4 said:
You reckon my SSD will just fail to boot up one day?
Click to expand...

It is almost certainly not the physical drive.
The software on it is in need of a full reinstall. Some things can't simply be "fixed". Sometimes, you have to start over.
0

Exactly. It's not "the SSD" in all probability. It's "what's on it", as in, your Windows installation and programs. The information contained in the registry which is the part of Windows that tells it how everything works. Or something in the Windows boot manager or EFI partition. If any of that is messed up, it doesn't make a lot of difference what you do, it usually won't work.

There are some few things you can try, in order to fix it, if you want, but you might likely end up just having to do the clean install of Windows and all of your applications, anyhow, which is why I and many others usually recommend just DOING it to begin with. If you have a ready to go copy of the older Windows installation and want to TRY, I'm more than happy to walk you through those steps but there are really few cases where this is successful and mostly it's a waste of time to even bother with it.

Honestly, stuff should be backed up and, in my opinion, kept backed up to a secondary drive, at minimum at intervals of one per week although once per day would be better. Leaving several iterations or backup versions at a time on that drive will help to ensure that if something happens and you don't realize it, and back up several times WITH a problem already on the drive, that you have a copy several backup versions back to still work with in order to go back to when the problem wasn't on there at all.

OR, simply be ready and willing to do as I do and not only do THAT but also do a clean install of Windows once a year. Every time they release a major spring update, I do a clean install using the latest Windows ISO which can be downloaded using the media creation tool. This ensures that cumulative updates and software that you install and then remove (Which inevitably leaves crap behind anyhow) doesn't eventually start gumming up the works and creating problems. A clean, fresh OS installation will ALWAYS run better and faster than one that has been in use for a long period of time.

As to your question. Yes, your SSD WILL just fail to boot up one day, because ALL drives will fail sooner or later, but that is not to say that the problem you are having now is due to anything actually physically wrong with it at this time. It is almost certainly a software issue and it's doubtful that it's one you could fix without a major investment of time and effort. Even more so than reinstalling your applications would be.
You must log in or register to reply here.
Share:
Facebook Twitter Reddit Tumblr WhatsApp Email Link