Pc was working fine, and
few days ago it started and showed no boot nor bios screen.
By investigating i narrowed to the motherboard : ECS LGA 1155 H61H2-M2
Since i detached everything leaving only cpu, ram, atx psu, cpu psu, cpu fan, vga.
All other cables like pwr, rst also detached, also pulled mobo out of the case.
Tried working second PSU, and other ram sticks, and having this results:
Tried Clear CMOS - has no effect.

1. When it starts normal at first i get into bios [ since no hdd attached] and
at first ram speed show proper 1333mHz ; I do save setting and after bios shows
again it shows now 1067mHz which is strange, and if i just wait in the bios for some
time[ couple of minutes] it get frozen and screen starts flickering and showing jumping
lines.

2. When i don't get bios screen, i notice that sometimes it feels like mobo does get not enough
power and fans even does not spins fully, and stops after a second, and it repeats this irregularity.
And sometimes it start with a bit too much of fans running louder than usual. And sometimes
don't react to the power pin short to start the mobo.

So this is new problem to me, so any suggestion how to locate the issue and maybe fix it.
Thanks.
0

Did you connect the monitor to the motherboard directly without VGA?

How hot is the CPU getting while in BIOS?

Which power supply is it? brand and model

use only one RAM stick, if it freezes again, try a different stick
0
W 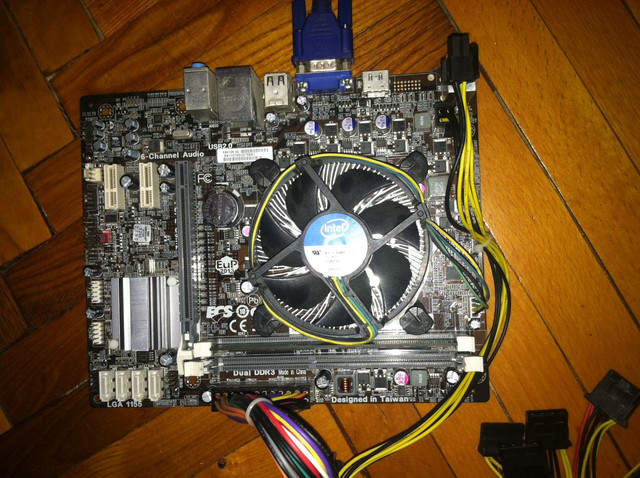 Did you connect the monitor to the motherboard directly without VGA?
Click to expand...

How hot is the CPU getting while in BIOS?
Click to expand...

Not sure - can't measure; Also yesterday did take out CPU, cleaned
dust, applied fresh thermopaste; since that had few boot to bios,
but seems not cpu issue.

Which power supply is it? brand and model
Click to expand...

While worked pc it was: Logisys PS550E12BK, and then
tested on spare Logisys PS550A-BK, and also had some boot bios
but on the second PSU it more noticeable that power draw very
irregular when no bios screen, and judging by the fan noise it
feels like louder than usual.

use only one RAM stick, if it freezes again, try a different stick
Click to expand...

Yes, did exactly that, had two in use, and one spare and swapping
one by one and in different slots[ two of them] makes no difference.
0
W

Also need to mention [ Same on both PSU i tested]:

- when i short PWR pins to start fans on PSU and CPU does short spins for
less than a second, not the normal force, and then like someone cut-off the power
does spin down, and while i let it does this thing, it's keeps repeating this light
spin on, and then spin off, and continues until cut power off.
And it happens when guarantee no bios screen, and
after some time sitting without power and with cmos clear switch on, sometimes
it gives normal start and in 5 mins on starts acting out.
But also suspicious for me this RAM Frequency that sometimes shows 1333, and
when it shows 1067, is to be sure after restart will be no bios screen.
0
W

Did:
1. Power off
2. CMOS Clear switch On
3. Replaced CMOS battery with 3.05Volt from working PC

Also during this trials i don't even need to attach VGA or HDMI
to know that no good start:
1. Fans of PSU and CPU runs louder/faster
2. Shorting PWR ping does not powers off the board, does not reacts

which i assume no BIOS in effect since does not reacts on my actions.

Also this problem appeared out of nowhere:

Video in BIOS after 3-4 minutes
And i was doing nothing, and after
screen blacked out, for some time even
turning power on/off on the PSU mobo
didn't reacted on PWR pins short.
You must log in or register to reply here.
Share:
Facebook Twitter Reddit Tumblr WhatsApp Email Link