i'm looking to get some help with a really annoying issue. I'm crossposting this in a few places to hopefully get more visibility

Before I built my new PC, I tried the graphics card (which I got first, along with the PSU) in my old PC on windows 7, with a GTX 750TI. It had some trouble at first, wouldn't post etc, had to reseat it and try different power cables. It would also crash every game to a black screen with all the fans running at top speed, until I reapplied thermal paste to its processor, at which point it stopped doing that! after that it seemed to work ok, though of course it was massively throttled by the Athlon 860K that I had.

That is until I built my new rig. Now, on the games I've tested it on (Kingdom Come Deliverance probably being the most demanding, I've also tried BeamNG drive and GTA4) runs terribly, and has really bad stuttering. This takes the form of a very uniform hanging, every second or so the video will pause, quite smoothly, then carry on again, as if someone is pausing the rendering at exact intervals. KCD is basically unplayable, and it does seem to get worse up to a point as time goes on while playing, although I always get annoyed and stop after about ten minutes. I suspected it was maybe temps but they remain around 65-70, so not terrible. I've not seen the CPU go much above 50! When the hanging happens I sometimes but not always hear the gpu fan going up and down in a regular rythym.

What I've tried so far:

3 . I have it plugged the PC directly into a wall plug and not a strip, not that that should really have anything to do with it.
I've attached this image of the 'performance' window in BeamNG drive - when those very obvious 'spikes' happen is when the hang occurs. I don't know what they mean, but the very strange thing is that, at one point, the game ran fine with the performance window open, then poorly when I closed it!

I'm really keen to sort this issue out as it's so annoying to seem to have wasted all this money i'll monitor notifications so if anyone can help i'll be very glad to provide any further information!
0

If you go into AMD Settings - Peformance, and move the "Power Limit %" slider to +25%, does the problem lessen or go away?

Install and run latencymon to report DPC latency of your system.

What is the exact GPU driver version you're using?

Have you updated your mobo BIOS?
0
H

hi, thanks for the response!

I have GPUZ set to 0.1 sec sensor refresh, is this what you mean?

I will try the power limit % up and down now and get back to you.

The exact driver number is 20.2.2, it seems to be all tied in the the whole AMD control panel thing

I did think of that but honestly, I'd rather not - I've never done it, for one thing, and the ASRock website recommends not to do it for my Pinnacle Ridge CPU, so should I even think about it? My BIOS says it's running V3.70 currently.
0
H

@tennis2 thanks so much for the suggestions, changing the power limit down by 25% seems to have more or less totally cured it! no stuttering at all in BeamNG or KCD!!! I will now download and try some others to make sure this stays the case

thank you so much!

out of interest, do you know why this might have helped? is there maybe a way to change it so it doesn't need settings like that changing?
0

Just so I can answer your question correctly - You REDUCED the power limit (-25%)?
0
H

My apologies, when I read your OP mentioning "it crashed all the time with full fans, then I repasted and it was fixed", I initially discounted a thermal issue. However, it would seem that you've only REDUCED the thermal issue from crashing to throttling, not eliminated it.

What is your GPU temp (leaving the Power Limit % at zero) about 10-15 minutes into a FurMark run (also report fan speed)? While you're doing that test with GPUz open, let me know what your GPU frequency and core voltage is.
Repeat with your new -30% power limit.

I know you stated 60-70C before, but that's actually abnormally low for a full-load, steady-state temp. Most RX480s target around 72-75C by adjusting their fans accordingly.

When you re-applied thermal paste, did you use the amount of about a half-grain of rice? (this is the proper amount). Did you properly snug up the screws that hold the heatsink down after doing this?

We've only applied a band-aid so far. Still much to sort though to get this sucker running in tip-top shape!

hi tennis2, thanks for coming back again!!

I will run a Furmark test on non-adjusted power limit then -30% and have GPU-Z open in the background shortly. It does stray up to 71 or 72 at times, maybe 73, but I've not seen it much above that during gaming.

For the thermal paste, it sort of blobbed out of the syringe a bit so I probably used an amount the size of a garden pea, I think I had also read some bad advice online about how much to use. I used Corsair TM30 paste, it came out slightly watery, as if it had separated, but with a little stir it took on what seemed like the right texture / complexion.

The card is a Sapphire model, I believe it's known as a 'reference' card, it has one fan (nice and clean and clear with the help of an air compressor!)

EDIT - forgot to add, I'm not sure re the screws, are they the ones that hold a sort of x-shaped, sprung clip onto the top of the card? if so, they are tightish but I didn't push them too far!

Also...AMD's tuning panel thingy keeps forgetting my tuning settings, not a major deal but is there a way to get it to stop?
0
H

First test results, with 'stock' power level - Fans ran very loud and continued to run for a few mins after the test. Serious hanging / stuttering of the 'furry object'

Second test with -30% power level. Fan remained at a fairly tame level, and the squiggle / line on the temp graph stayed very still. I didn't run this second test as long as everything was sitting at a similar level. The furry object was actually very smooth here

let me know if that link doesn't end up working, Imgur is a terrible website
0

The AMD settings issue is partly Windows' fault. Simply restart (not shut down) your PC and the settings should hold. What driver version are you using? I'm on 19.9.2 and I'm not having that issue. However, with other drivers over the years I have. I've just gotten into the habit of checking that the AMD settings are properly applied after a cold boot when I'm about to game, and if they're not, I do a quick restart.

We also need to know what case you have, how many of what size and rpm fans are acting as intake, and exhaust. And while, you're at it, what CPU and CPU cooler?
Last edited: Mar 5, 2020
0
H

This link might now work if you wanna have a look, I made it public

My case, I'm not sure...it's a cheap basic one with intake fan at the front bottom and left side. No specific exhaust fan. The CPU is a Ryzen 5 2500 with a wraith cooler, I got a cooler master Hpyer evo 212 but it didn't fit, and to be honest I can't fault the wraith currently, it's never gone much above 45 deg and never makes much noise.
0

Seems like the card has some strangely low max temp limiter set, or something. Perhaps the previous owner tampered with the vBIOS? I'll be honest, I'm not well equipped to help/guide you through a vBIOS update. I've never done it myself, since there's typically no reason to mess with that stuff, but people certainly do it.

There are some things I can help you with in lieu of (or in addition to) a vBIOS flash. If you set "manual" voltages in AMD Settings - Performance, you can lower power draw at a given frequency, which would keep you away from that throttle point.

VRAM voltage is usually fine at 930-950mV. (that sets the lowest voltage that will be applied to the core when not idle).

If you want to learn more, here's a guide I put together. That's for the "old" (up till Jan 2020) AMD WattMan layout. Give it a go in the 20.2.2 version you have. If you can't figure it out, I'll have to bite the bullet and update so I can help better.
Old Version:

Current version: (notice you select "manual" and "advanced control" to see this view) 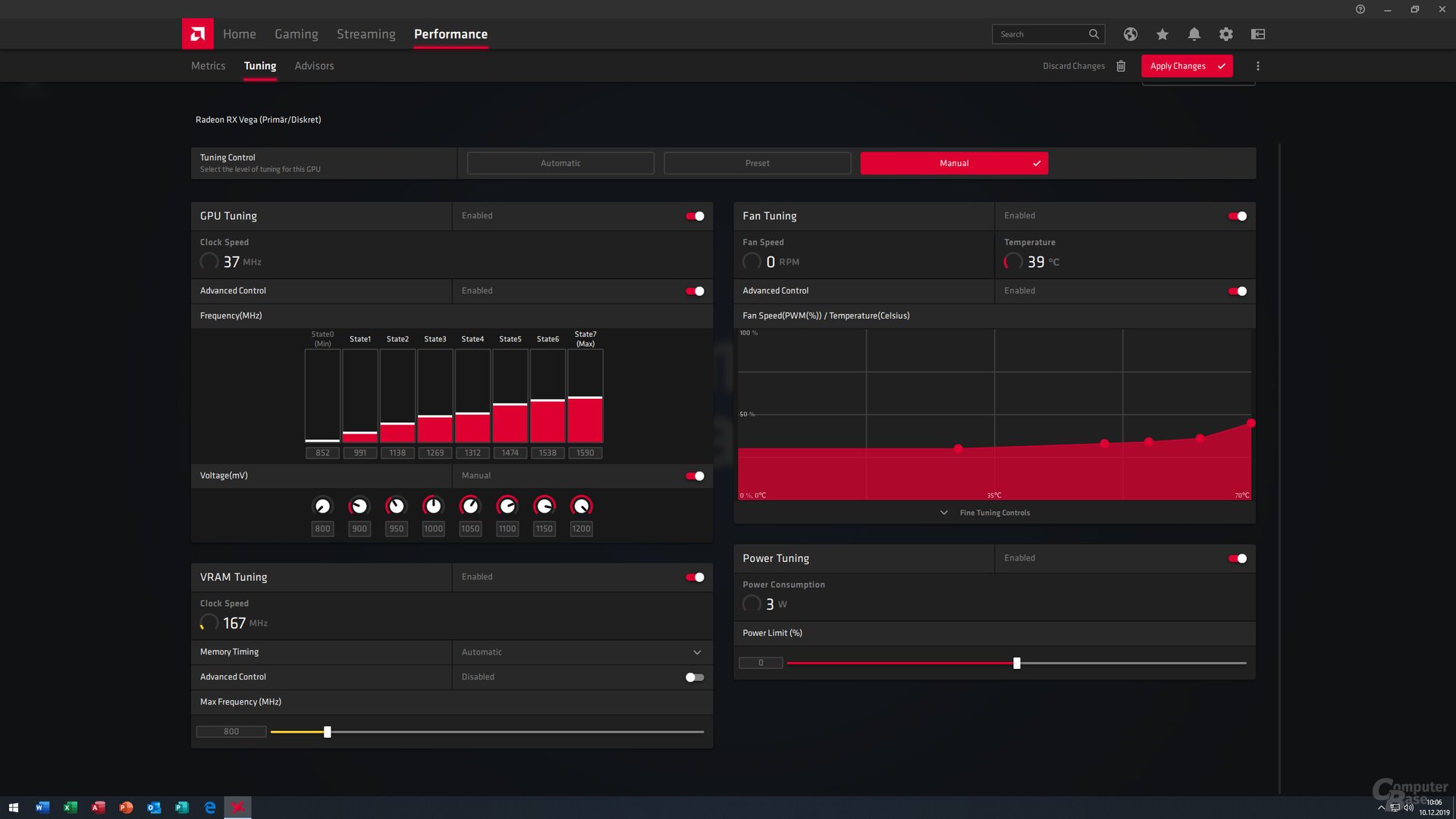 Yeah, maybe that's what happened, I don't really want to try and flash the BIOS cause they can only take so many flashes right? And it can brick the card? Perhaps I'd have a case for my money back as the card was sold as working but if you say it's effectively running on three cylinders, to use an automotive metaphor, then it ain't working.

So, to get it straight in my head, you think maybe the issue is that the card believes it's getting too hot, even though it's at a very stable temperature, and going "hang on there, i'm not handing out any more watts", causing a stutter?

I've tried the settings you suggested, following the guide you posted. Here's a pic of my wattman to show what settings I've used. picture here. I will test it shortly

P.S - god knows if Imgur will work this time, but basically I followed your linked guide to the letter.
0

VRAM max frequency should be 2000MHz, not 800.
Other than that, looks fine. Your card may or may not need a bit extra voltage to keep from crashing (you'll see a blackscreen flash, then you'll see everything set back to Auto in AMD settings if it crashes), but that's ultimately dependent on the "chip lottery". What you've got there is a good place to try and start from.

ok, I didn't get round to it last night, I'm gonna reset the power slider to stock and test these new settings!

Well, it didn't work - furmark wouldn't open (not responding) so I restarted, which just reset everything.

Do you think it might be worth looking up how to do a GPU bios flash?
0
H

It seems the VBIOS Version number on the TechpowerUp site is the same as my current one, but could it be that my current one is modded / damaged and needs replacing fresh?
0

I'm inclined to think so, based on this abnormal behavior.

If I were you, I'd have capped state 7 frequency to the same as state 6 (1235MHz) and you could try bumping that corresponding voltage to 965mV or so. When troubleshooting stability, it's always best to remove any overclocks (or in this case, not create one).
Last edited: Mar 6, 2020
You must log in or register to reply here.
Share:
Facebook Twitter Reddit Tumblr WhatsApp Email Link